Oak Drive, 1926 Forest Hills was developed as part of a new wave of real estate development in the 1920s - one that already recognized that how people lived, worked, etc. had fundamentally changed with the incredible adoption of the automobile.  Much like Duke Park, Forest Hills was a geographically proximate suburb - although the houses and road patterns were different than those implemented in previous developments, the location was interconnected/adjacent to the earlier development of... Read More

Forest Hills was developed as part of a new wave of real estate development in the 1920s - one that already recognized that how people lived, worked, etc. had fundamentally changed with the incredible adoption of the automobile.

Much like Duke Park, Forest Hills was a geographically proximate suburb - although the houses and road patterns were different than those implemented in previous developments, the location was interconnected/adjacent to the earlier development of Morehead Hill and Lakewood. Unlike previous developments, and unlike Duke Park, there was a more self-contained plan to Forest Hills, with circuitous and circular drives, and the focus of the development on the nine-hole golf course and clubhouse at its center.

In 1917, WJ Griswold, JB Mason, WE Warren, and SP Mason incorporated the New Hope Realty Company. Griswold was an early insurance executive and mayor of Durham from 1910-1912. JB Masonwas a cashier at the Citizens Bank. New Hope Realty hired Earl Sumner Draper to lay out the landscape architecture of Forest Hills in 1917. Draper began his career in Charlotte as a field supervisor for Boston planner John Nolen, who designed the 1200 acre Myers Park suburb in Charlotte. In 1917, Draper had left Nolen's firm to start his own firm -  would become involved in laying out "hundreds" of neighborhoods in the south prior to WWII.

The initial developers went bankrupt, and the First National Trust Company bought the project in 1922. The scale of the project was reduced to 150 acres, and the African-American 'section' was eliminated. The New Hope Realty Co. was revived under the ownership of James O. Cobb and Fuller Glass. Cobb and Glass hired Winston-Salem-based architects Northup and O'Brien, who placed George Watts Carr as the head of their new Durham office. Carr designed several early houses as well as the clubhouse. (I speculate that he also designed the building on New Hope's "Store Lot".)

In 1923 the newspaper article= , “A Coming Suburb,” describes the development of Forest Hills:

“Forest Hills” is the name given to a 150 acre tract of land on the New Hope Valley road which a local real estate and investment company is opening and improving for public sale. Vickers Avenue and Duke Street extension run into the property and make it advantageously situated.

Located in a region of the surrounding country of Durham noted for its hills of undulating beauty the section bids fair to soon be hailed as the real suburb for residences of the City of Durham. Unlike many other cities of equal size or even smaller, Durham does not have an exclusive residential section and this project which is being opened up should provide such a section for the city.

Over five miles of streets and concrete sidewalks have already been laid and more paving is under construction. The section has not been outlined with form square blocks as is to be found in the central part of the city but for the most part the streets and avenues in the new sections have followed a natural course in outline that assures a scene of beauty and aesthetic charm. The residential lots are laid out in circular style surrounding a nine hole golf course which promoters say will be one of the best in the state. The lay of the land is natural[ly] conducive [with] excellent arrangements for golf grounds and with the building of a handsome club house and swimming pool the residents of the new park will have all of the privileges and advantages that can be provided.

. . . The developers are not making any stipulations as to the amount that shall be expended for homes, and the only requirements being made are that the homes shall be built at a stated distance from the roads to provide for lawns and walkways in front of the homes.

Durham county officials are supervising the paving of the New Hope Valley Road from the end of Vickers Avenue to the point of intersection with the Chapel Hill Durham boulevard with the consequence that when it is completed a new way will be opened to the public going to the University town . . . .

No amount of money is being spared to make Forest Hills one of the most beautiful, and interesting sections ever developed. . . . $7,500 has been spent in building concrete bridges. For grading sidewalks and main paving $100,000 is to be spent. Water and sewer connections will be made at a cost estimated at $65,000, while the company will spend approximately $22,000 for the club house and swimming pool and golf course which will be prepared for the pleasure of the Forest Hill property owners . . . .

The property of Forest Hills has not been placed on sale definitely until now. . . . Several home sites have already been sold in the section and six homes are at present under construction. George Watts Carr designed the homes that are now being built . . .

Setbacks were not the only requirement stipulated by the New Hope Realty Co. - aside from various other construction stipulations designed to keep a 'premium aesthetic',  deeds for property in the new development also prohibited African-Americans from owning or residing in the properties except as domestics.

New Hope Realty filed for bankruptcy in 1929. The clubhouse and golf course were purchased at auction by John Sprunt Hill. Hill likely converted the golf course to park use by the early 1930s. He gave use of the clubhouse to his daughter-in-law, Ann, in starting the Calvert Method School in 1933.

Hill donated the former golf course and clubhouse to the city in 1938 to be used as a park and recreation center. The Calvert School moved to the former Watts house on South Duke Street. The pool became public; for some period of time, the clubhouse was used as a branch library. 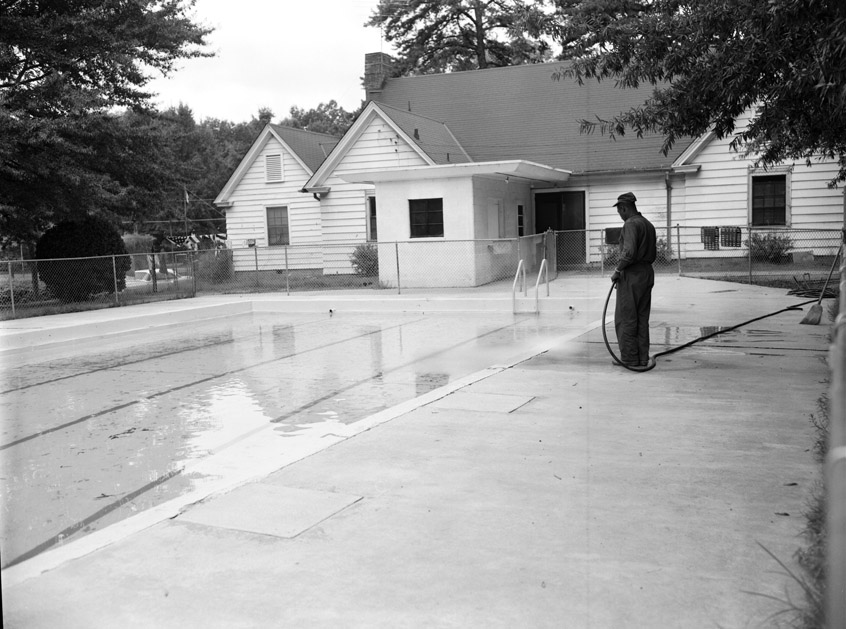 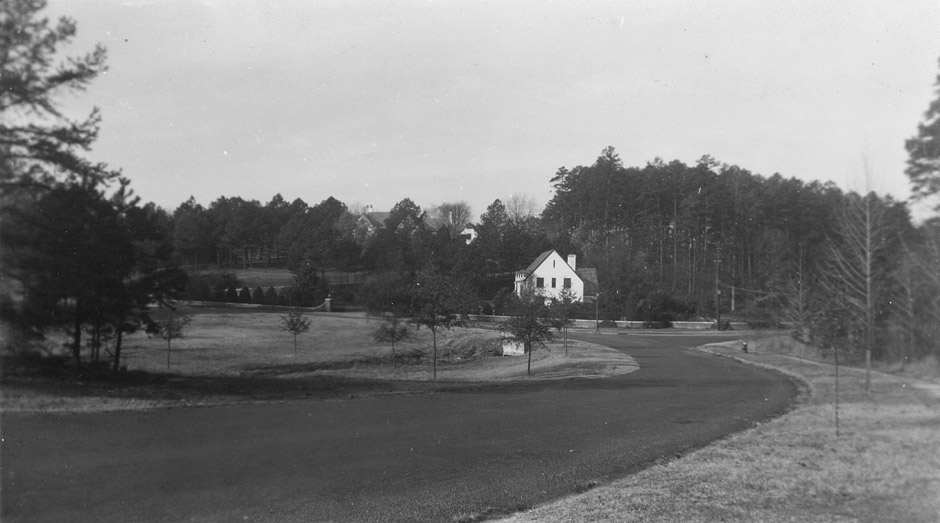 The development of Forest Hills continued throughout the mid 20th century. The park was very popular; at times, the reason that it wasn't developed became clear. 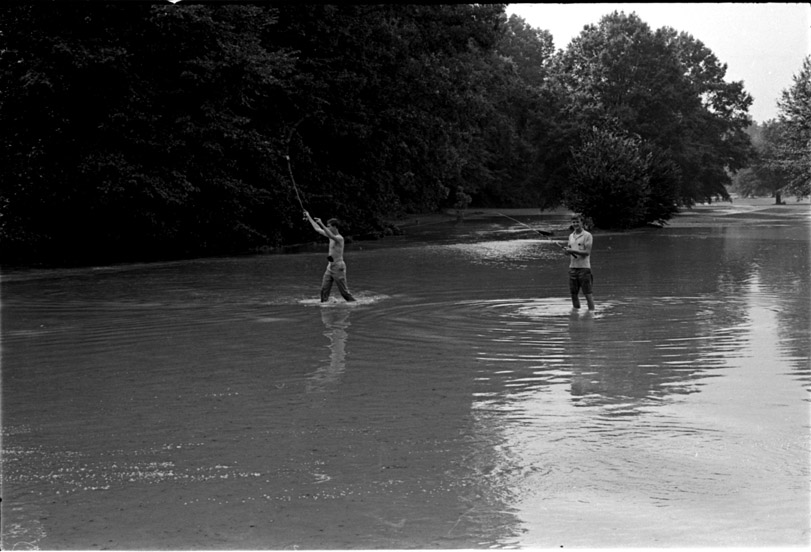 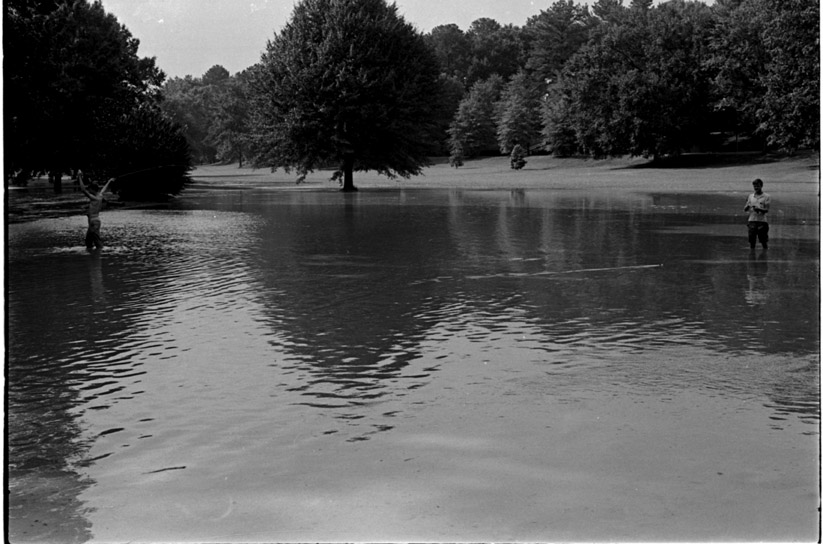 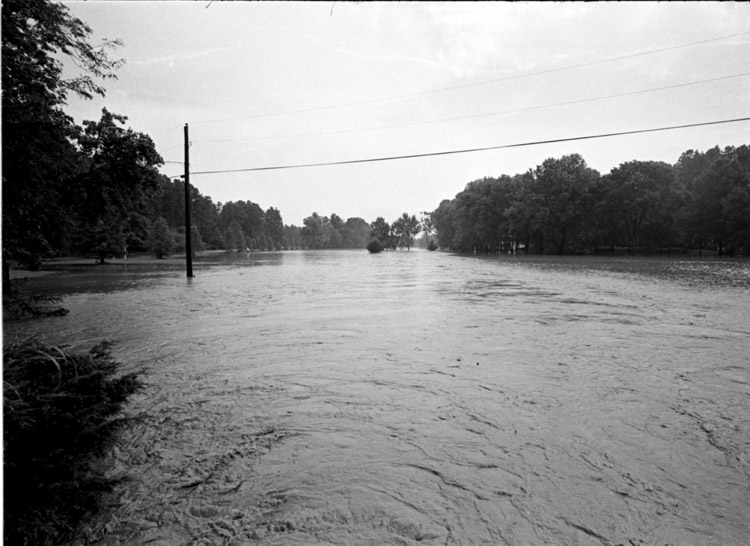 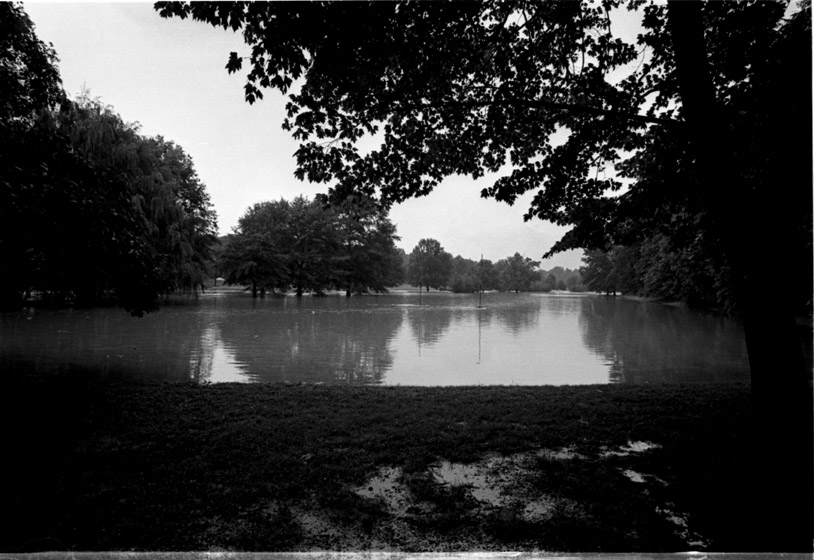 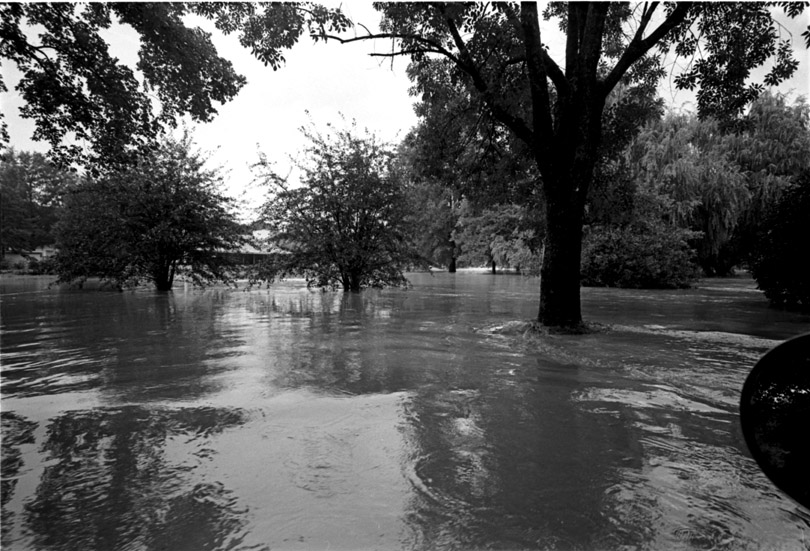 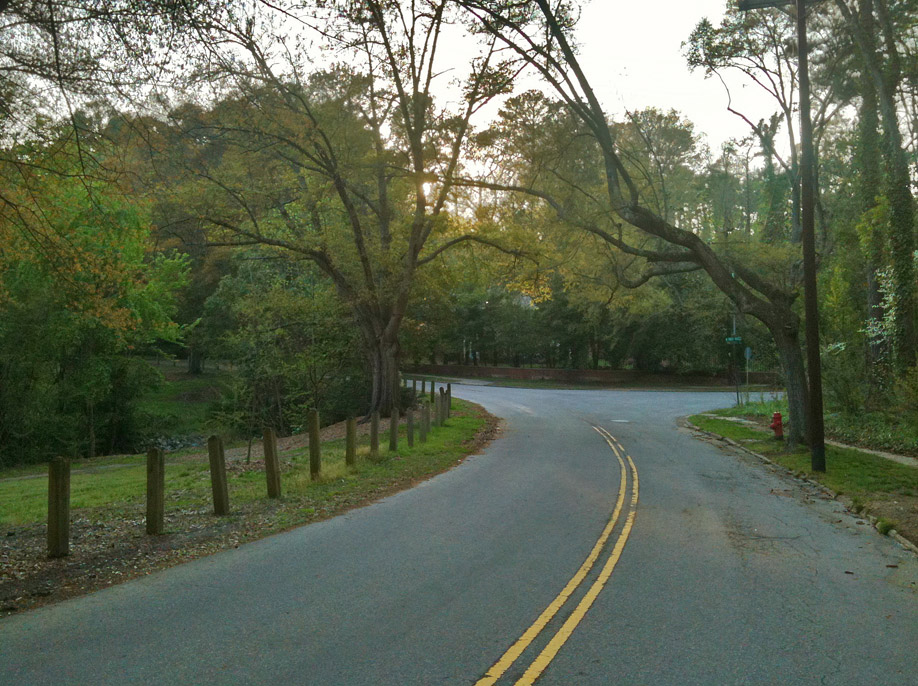 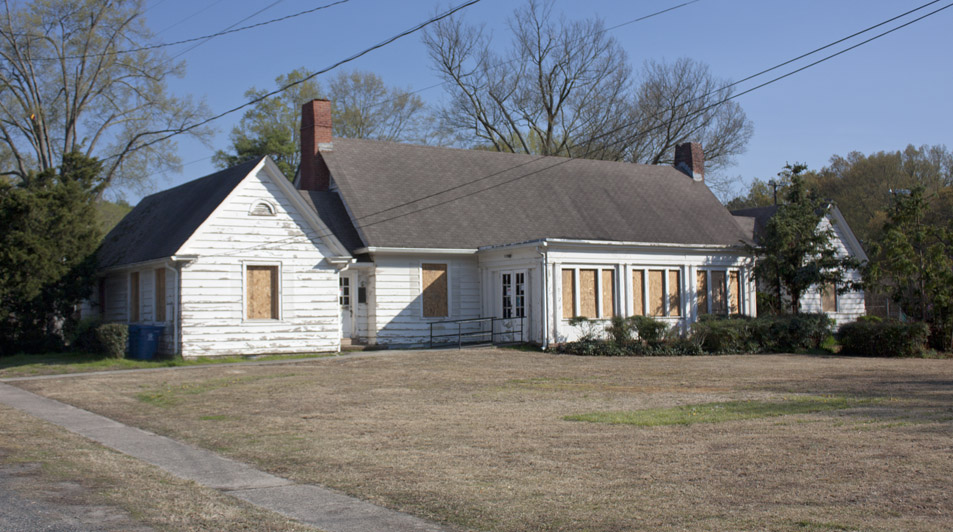 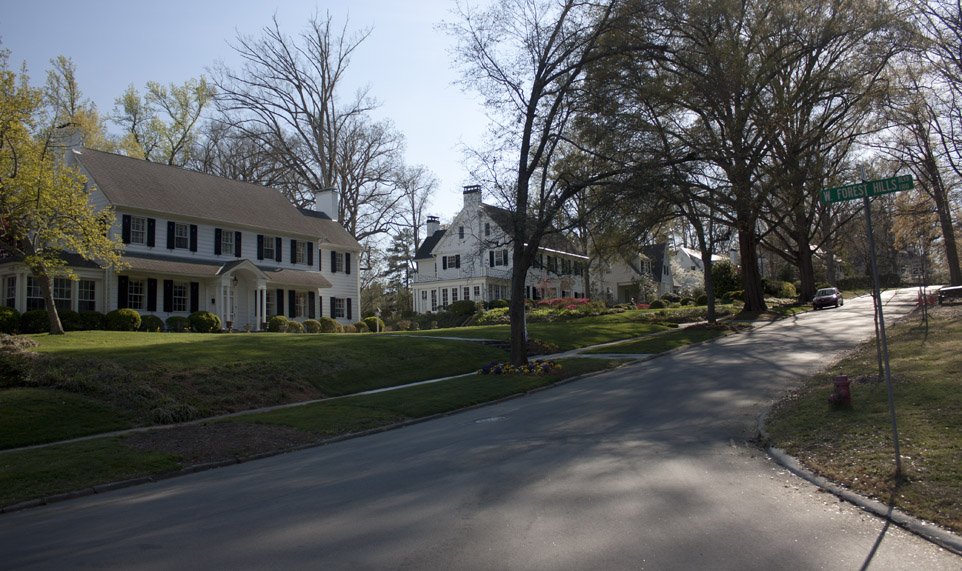 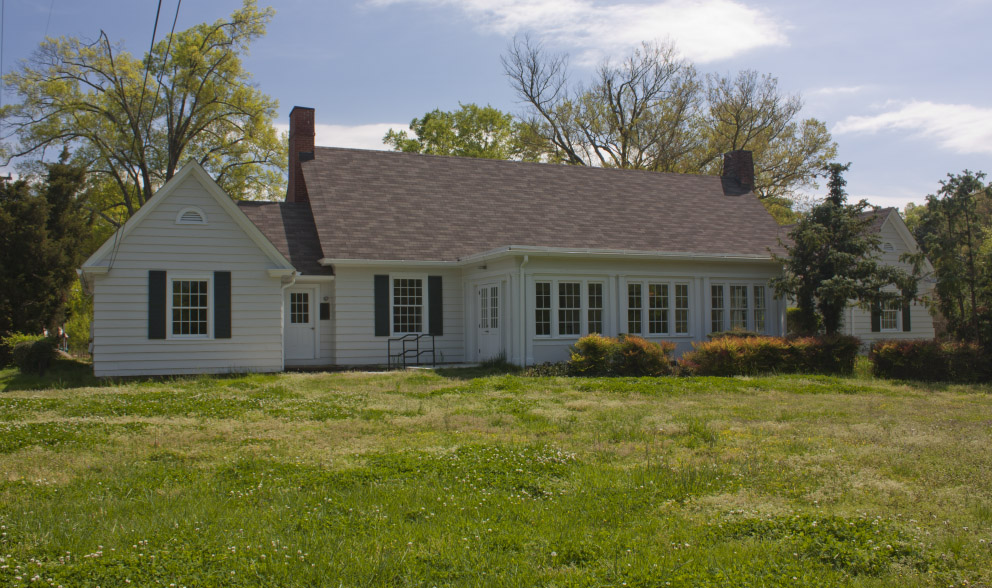