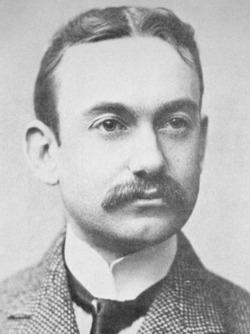 Date of birth
12.28.1868
Place of birth
Philadelphia, PA
Date of death
09.18.1938
Can you help?
You don't need to know everything, but can you improve the description? Maybe add some more details?
Log in or register and you can edit this.

Horace Trumbauer was a prominent American architect of the Gilded Age, known for designing residential manors for the wealthy. Later in his career he also designed hotels, office buildings, and much of the campus of Duke University. Trumbauer's massive palaces flattered the egos of his "robber baron" clients, but were dismissed by his professional peers. His work made him a wealthy man, but his buildings rarely received positive critical recognition.

Trumbauer was born in Philadelphia, the son of a salesman. He completed a 6-year apprenticeship with G. W. and W. D. Hewitt, and opened his own architectural office at age 21. He did some work for developers Wendell and Smith, designing homes for middle-class planned communities, including the Overbrook Farms development.

Trumbauer's first major commission was Grey Towers Castle (1893), designed for the sugar magnate William Welsh Harrison. Its exterior was based on Alnwick Castle in Northumberland, England, although its interiors were French, ranging in style from Renaissance to Louis XV. Harrison introduced him to the streetcar and real estate developer Peter A. B. Widener, whose 110-room Georgian-revival palace, Lynnewood Hall (1897–1900), launched Trumbauer's successful career. For the Wideners, the Elkinses and their circle, he designed mansions in Philadelphia, New York, and Newport, RI, office buildings, hospitals, and the main library at Harvard University.

In 1903, he married Sara Thomson Williams and became stepfather to Agnes Helena.

Architectural Record published a survey of his work in 1904. In 1906, Trumbauer hired Julian Abele, the first African-American graduate of the University of Pennsylvania Architecture School, and promoted him to chief designer in 1909. Trumbauer's later buildings are sometimes attributed to Abele, but this is speculation. With the exception of the chapel at Duke University (1934), Abele never claimed credit for any of the firm's buildings designed during Trumbauer's lifetime.

Philadelphia Museum of Art (1916–28). This was a collaboration between Trumbauer's firm and Zantzinger, Borie and Medary. The commission for the Philadelphia Museum of Art (1916–28) was shared between Trumbauer's firm and Zantzinger, Borie and Medary. Trumbauer architect Howell Lewis Shay is credited with the building's plan and massing, although the perspective drawings appear to be in Abele's hand. When it opened in 1928, the building was criticized as being vastly overscaled and nicknamed "the great Greek garage". But, perched on Fairmount Hill and terminating the axis of the Benjamin Franklin Parkway, it is now considered the most magnificently-sited museum in the United States.

Despite tremendous success and his apparent ability to impress wealthy clients, Trumbauer suffered from overwhelming shyness and a sense of inferiority about his lack of formal education. He had a number of commissions until the Great Depression, but began to drink heavily to help bear his burdens. He died of cirrhosis of the liver in 1938, and is buried in West Laurel Hill Cemetery, Bala Cynwyd, Pennsylvania. 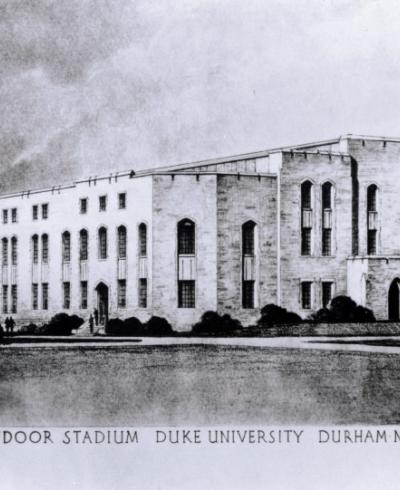 (Courtesy Duke Archives) Like the rest of West Campus, the Indoor Stadium was designed by Julian Abele of the Hoarce Trumbauer firm in Philadelphia. Legend has it that the basic design was sketched on a matchbook by Eddie Cameron and Wallace Wade in 1935. It became the new home to the no-longer-Trinity-but-now-Duke basketball teams, far...
Read More 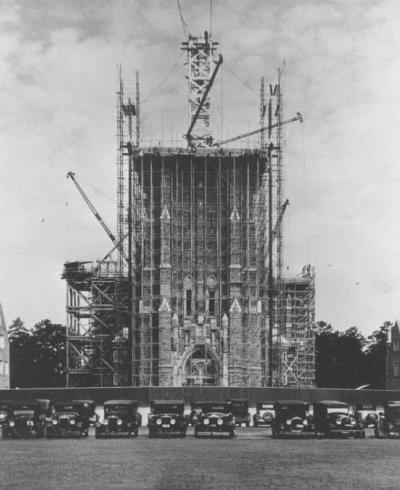 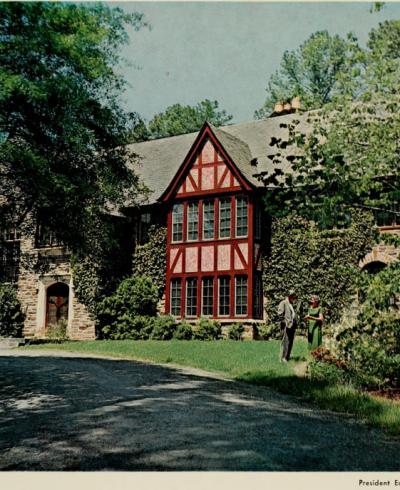 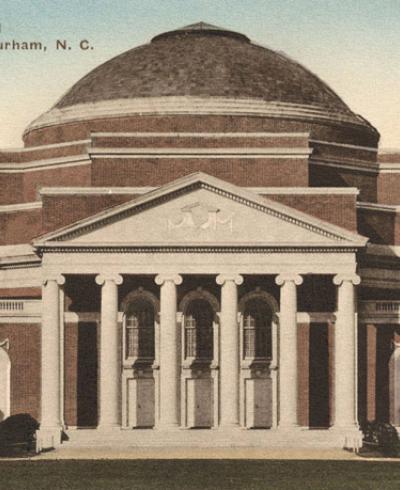 Built as the focal point of the Women's College, the Auditorium was designed to sit 1400 people and was used primarily as a chapel for the college when it opened in 1927. The building is named for Alice Baldwin, who was a professor of history at Trinity, the first female faculty member at Duke, and first dean of the Women's college.
Read More 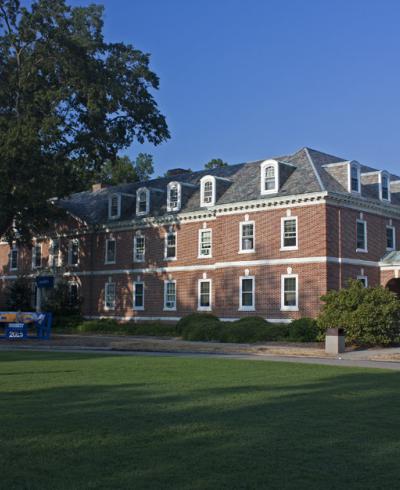 A dormitory named for Professor John Spencer Bassett, most well-known for the 'Bassett Affair"
Read More 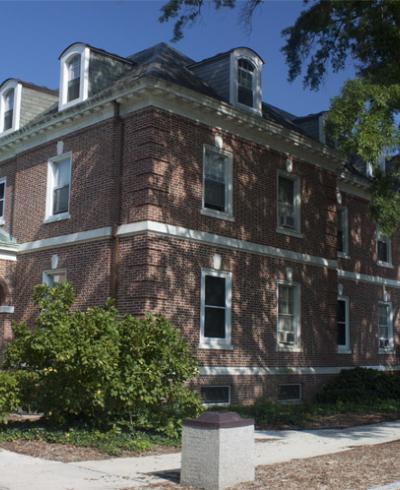 A dormitory, the building was named for Professor William Pegram
Read More 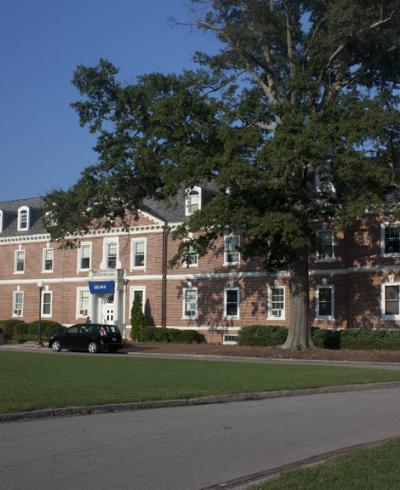 One of the original numbered dormitories, the building was re-named for trustee Joseph Brown, class of 1875, sometime between 1927 and the mid 1960s.
Read More 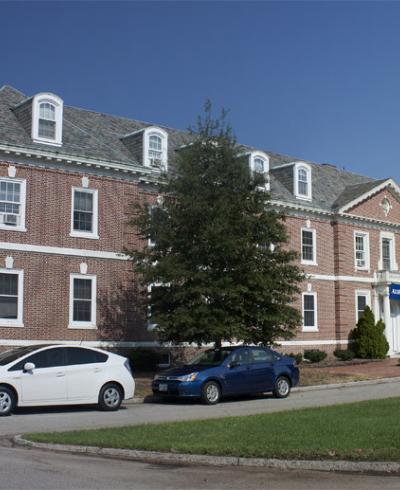 One of the original numbered dormitories, the dormitory was renamed for Colonel Alspaugh (class of 1855,) as the North Dormitory on Trinity's campus had been earlier.
Read More 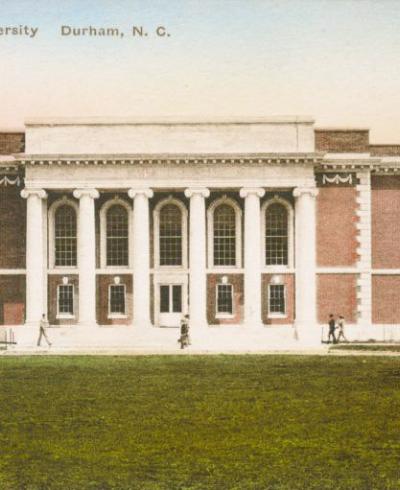 The original Union / dining hall for the Women's College, the the building contained multiple meeting areas and lounges, as well as faculty dining areas. As a small note that seems lost to the annals of time, when I was an undergrad in the late 1980s, there was a fine dining restaurant that accepted 'points' (on the Duke card) in the Union called the "Magnolia Room." The building is now called 'The Marketplace' since an major interior renovation in 1995.
Read More 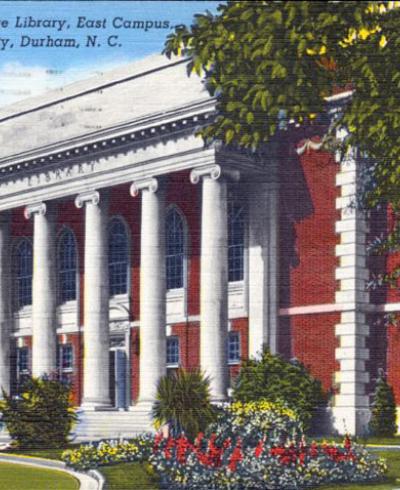 Replacing the Trinity College Library, the East Campus Library also served as Duke's first Art Museum until the Science Building was renovated in 1969 for that purpose. It was renamed the Lilly Library in 1990 for donor Ruth Lilly, and underwent extensive interior renovation in 1993.
Read More 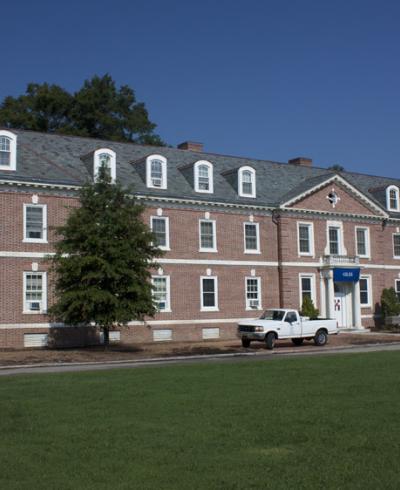 Named for three sisters (Theresa, Mary, Persis) who were the first women graduates of Trinity College (in 1878.) It serves as a dormitory.
Read More 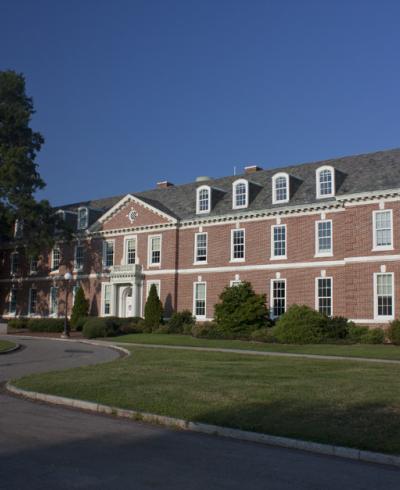 Built as the Science Building for the Women's College, the building was renovated in 1969 to become the home for the Duke University Museum of Art. In 2004, the collection was moved to the Nasher Museum, and the building was again renovated to house "Cultural Anthropology, Literature, African and African-American Studies, Latino/a Studies, Critical US Studies, and the Duke Human Rights Center."
Read More 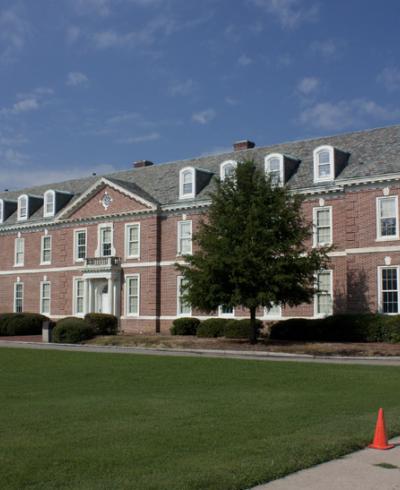 Named after Julian Carr, the Carr building was constructed as, and remains, an academic building.
Read More