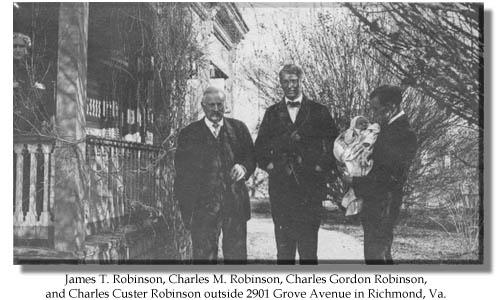 Date of birth
03.03.1967
Place of birth
Hamilton, VA
Date of death
08.20.1932
Place of death
Norfolk, VA
Can you help?
You don't need to know everything, but can you improve the description? Maybe add some more details?
Log in or register and you can edit this.

Charles M. Robinson was born on March 3, 1867 in Hamilton, Virginia. He was the first child of James and Elizabeth Crockett Robinson. James Robinson had worked as an architect.

While Charles was still very young, his father moved his family to Canada, where Charles would receive his elementary education.

In 1889, when he formed his first architectural partnership with G. T. Smith. Their firm became known as Smith & Robinson of Attoona, Pennsylvania.

It was during the duration of this partnership that Charles married Annie Custer of Altoona in 1891. In 1893, his son Charles Custer Robinson was born.

In 1901, Charles M. Robinson wanted to establish himself independently. He moved his family fro Altoona to Pittsburgh. He soon returned to his native state, Virginia, where in 1906, he set up his professional offices in Richmond. His first office in Richmond was located at Ninth and Main, a site now occupied by United Virginia Bank.

He competed for bids on the new State Normal School (teacher's college) that was to be built in Harrisonburg. Now known as James Madison University, Charles M. designed all of the campus' buildings in the period of 1908-1928.

Charles focused mainly on the designing of normal schools in the early beginnings of Charles M. Robinson, Architect. He also designed Mary Washington in Fredericksburg, Va and Radford University in Radford, Va.. In 1918 he started work on twenty-one major pieces of work at Virginia State College in Petersburg.

Also in 1918, he designed for the Virginia State Board of Health. The Department of Health was then realizing that sanitariums were beneficial to patients and the community and were just as necessary as hospitals. The Board accepted bids, and Charles was chosen to build new sanitariums at Catawba, Burkeville, and Charlottesville. The sanitariums were called Catawba, Piedmont, and Blue Ridge, respectively.

In the 1920s, Charles M. Robinson, Architects had moved into a new office located in the Times-Dispatch Building which the firm had designed. A partnership was formed of the primary members of the firm. The partners were Charles M. Robinson, Charles Custer Robinson, Benjamin A. Ruffin, and J. Banford Wallord.

Many other colleges asked for Charles' services. These included:

Charles did not only design public works, but he also created many beautiful private structures in the twenties. Most of these were in his home of Richmond. This category included: The Sunday School at Ginter Park Methodist Church, the old Miller and Rhodes building, Ruger's Hotel (now the Raleigh), and The Times-Dispatch Building (now the Insurance Building). His biggest job in Richmond was as an associate architect with Marcellus Wright, Sr. in the construction of the Mosque. Stuart Circle Hospital, Grace Hospital, and St. Elizabeth's Hospital were also designed by Charles M. Robinson.

Outside Richmond he designed private structures too. Among these are the Rockingham Memorial Hospital in Harrisonburg, the Medical Arts Building in Newport News, the Charles H. Taylor Memorial Library in Hampton, and Masonic Lodge Number Six in Williamsburg, which Charles M. gave to the Masons.

In 1926, Charles retired to his farm, Mirebeth, in Hampton, Virginia. He remained active in his partnership, designing plans at his home, and traveling to inspect the buildings while they were under construction.

In 1929, the stock market crashed and the economy suffered. Charles M. Robinson, Architects remained active, however until the early part of 1932 when the depression was at its peak. Because no one could afford to buy more land or a more expensive home, construction was at its lowest point in decades.

Charles M.'s health was failing, and in August 1932, he entered a Norfolk hospital. On Saturday, August 20, 1932, Charles M. Robinson, on the most prominent architects of the South, died after an operation.

On Sunday, August 21, 1932, the firm of Charles M. Robinson, Architects was terminated. 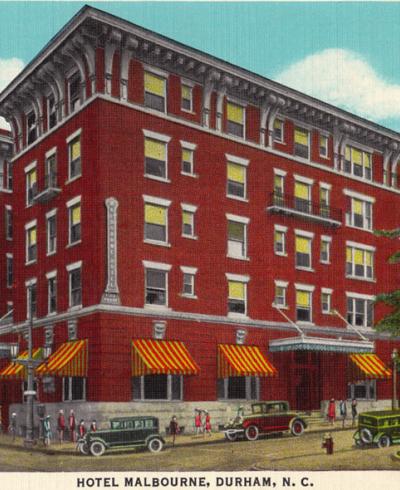 The preeminent hotel in Durham when built in 1912, the Malbourne suffered after construciton of the Washington Duke Hotel in 1925. By the 1950s-1960s, it was seen as a 'seedy' hotel of faded baroque glory. It was unfortunately demolished in 1966.
Read More