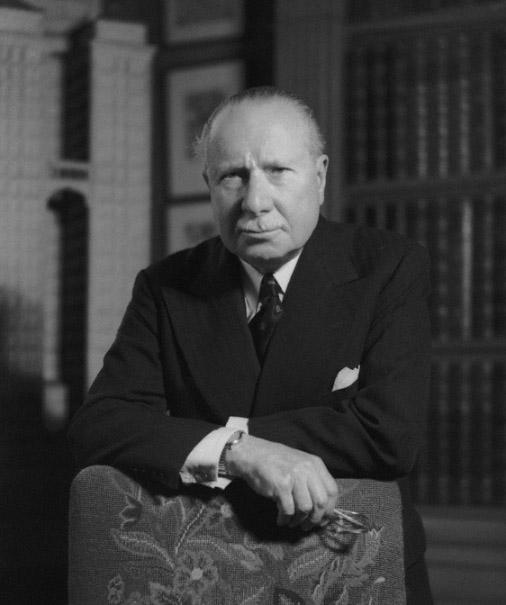 Alfred Charles Bossom (Oct.16, 1881-Sept. 4, 1965) was an English architect who practiced architecture in the United States from 1903 until he returned to England in 1926. A specialist in bank design, he designed both temple-like and high-rise structures, and his work in North Carolina included both types for the bustling New South cities of Charlotte and Durham and the smaller towns of Goldsboro and Salisbury.

During his tenure in this country, Bossom planned banks in many cities in various states including New York, New Jersey, Texas, Virginia, Louisiana, North Carolina, and West Virginia. Known for his imaginative deployment of Roman-inspired classical forms, he also employed motifs from the Italian Renaissance, and his early use of Pre-Columbian Mayan elements--as in the Liberty Bank in Buffalo and the Petroleum Building in Houston--presaged the Art Deco style. Bossom's work in North Carolina came at a time when the state was striving for urban growth and prosperity, and financial leaders wanted buildings to represent the stature and solidity of their firms. Bossom's national architectural reputation in the banking world led North Carolina bankers to commission designs from him.

After a fire destroyed the center of the tobacco city of Durham in 1914, Bossom designed two skyscraper banks on Main Street. His 5-story Fidelity Bank (Geer Building) was derived from a Florentine palazzo, while half a block away, the Merchants Bank featured Greek Ionic elements derived from the Erechtheion on the Acropolis in Athens, Greece. He also used Greek sources for his Charlotte National Bank (1919), a temple-type building where massive Doric columns and entablature gave a sense of severe dignity. For the Wayne National Bank in Goldsboro, he planned a richly detailed skyscraper of 9 stories, which is still the tallest building in that community. For another skyscraper, the 9-story Southeastern Building in Greensboro (100-102 N. Elm St.), built in 1920 for the American Exchange National Bank, Bossom contributed the design for the original bank lobby. Bossom also employed classical elements, most notably a Roman triumphal arch, in the small but monumental First Union National Bank in Salisbury (1920), which still stands as a lawyers office.

Local boosters called attention to Bossom's elegant buildings as signs of urban prosperity. The Wilmington Star of June 10, 1924, reported from Goldsboro, "Tallest building of its home city and striking in its decoration, the new building of the Wayne National Bank, of Goldsboro, will open on June 15 for business. The unusual features of the counting room have been much discussed in banking circles. The room is 30 feet in height, 45 feet in width, and extends nearly the entire length of the building, 110 feet."

Probably using language supplied in part by Bossom, the newspaper explained the choice of style: "The president of the bank, Mr. E. K. Borden, and the directors announce that one reason why their architect, Mr. Alfred C. Bossom, used the rich Italianate effect in planning the bank is that the climate of Italy and North Carolina are practically the same." Moreover, as the newspaper continued, "The ceiling of the counting room closely resembles the famous coffered one of the school of St. Mark, in Venice. It therefore suggests that great city of Italy which for centuries was a financial and commercial center for to its wharves came the products of the surrounding country and the world. The thriving city of Goldsboro is also a central point for the distribution of the products of the vast surrounding territory. The emblem of that great municipality known as the Queen of the Adriatic, the Lion of St. Mark, is also a symbol of financial strength and power. Its use as a motive for the ceiling decoration of the Wayne National Bank is therefore appropriate."

Bossom returned to England in 1926 and became a Member of Parliament in 1931. Among his many contributions was a handbook of parliamentary procedures, Our House: An Introduction to Parliamentary Procedure (1948). He remained interested in architecture, contributing his knowledge to parliamentary bills that involved architecture or planning, providing funds to the Royal Institute of British Architects for prizes and scholarships, and writing about architectural matters. His main book, Building to the Skies: The Romance of the Skyscraper (1934), is a praise of skyscrapers and the United States. Upon his retirement from Parliament in 1959, he was named a life peer, Lord Bossom of Maidstone. In 1910 Bossom married Emily Baynes, who died with one of their three sons in an air crash in 1932. A second marriage ended in divorce in 1947. Bossom died in London on September 4, 1965. 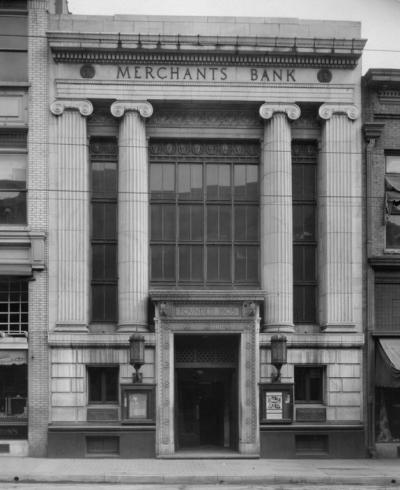 The Bossom-designed Merchants Bank building, built after the fire of 1914, was a beautiful neoclassical structure that later housed the Hood Industrial Bank and First Union Bank. Sadly, the beautiful facade was entirely removed in the 1960s when First Union moved.
Read More 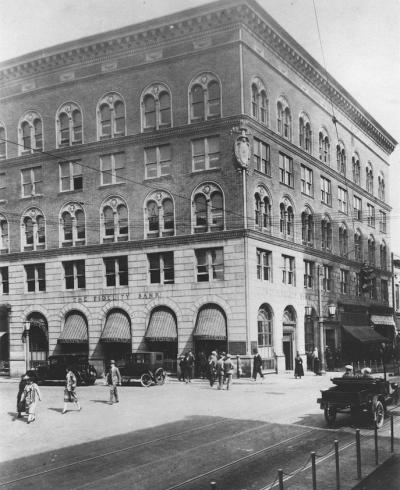 The northeast corner of Main and Corcoran Street has seen its share of building drama. For much of the 20th century, it was the location of one of the buildings on my Top Five list of How-Could-They-Have-Torn-That-Down buidings in Durham: the Geer building.
Read More