Tower Boulevard
Durham
NC
Year built
1986
Architectural style
Postmodern
Construction type
Steel frame
Neighborhood
Western Durham
Building Type
Commercial
Can you help?
You don't need to know everything, but do you know the architect?
Log in or register and you can edit this. 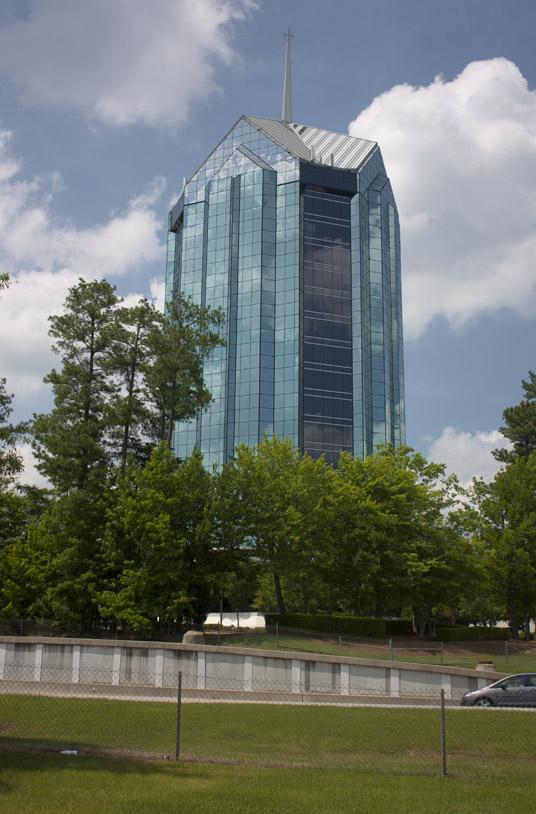 05.29.11     Texas developer Tommy F. Stone built University Tower in 1985. Aside from the typical 1980s postmodern ugliness ("when architects lost their minds" is a quote I heard in a documentary recently about postmodernism,) the tower became a sustained object of derision for its green tumescence, arising alone from the forest below. The story goes that Stone's son was a soccer player at Duke in the mid-1980s, which is what drew his Dallas Does Durham style of development to the South Square area.   I don't know whether Stone envisioned future towers along 15-501, a core around South Square, or simply wanted to build his big green building where he pleased. Interesting how downtown and this area have fared in the interim. Downtown has burgeoned with new activity, and the gravitational pull of young people has moved away from the apartment complexes around South Square and towards downtown. The primary retail center of the county has shifted dramatically to the south - to the area around Southpoint, while strip shopping centers have proliferated along the misery that is 15-501.    While the sprawling mess of single story chains will continue to sprawl between Durham and Chapel Hill, this area hardly feels like it competes with downtown as the, or even a center of Durham anymore.

A lot better looking than your average food truck.

On the subject of postmodern architecture in general -- I think we'll look back on that phase much like we do the baroque period. There will be pieces that stand out, pieces that are forgotten, but the general take on the era will be one of a sort of weirdly expansionist view of architecture. People will look back on it with curiosity, amazement, and humor, but not much in the way of genuine affection.

I kind of like it. I can't say that I approve of such dense building practices away from urban cores or transportation hubs. Nor am I a fan of the mirrored 'Dallas' look. But -- maybe because of those things -- I've always carried a soft spot in my heart for this building. It looks so odd and lonely -- but also somehow cocky -- rising as it does out of Duke Forest. And its lines, its massing, and even its appearance (I agree about the good use of different shades of glass) are really quite good. So I think of it as a kind of guard tower for Durham. Just standing out there, waiting and watching in case the hoards from Siler City or Snow Camp ever try to sneak by. Of course, I too call it the Green Weenie...!

Would that this could be driven (or towed) away like a food truck.

I recall hearing that when this tower was originally proposed it was meant to be one of three office towers, I believe the Erwin Square tower across town was also meant to be a small cluster of towers as well. Apparantely this (and the Erwin Square tower project) either never took off or was affected by the recession around '90 and the additional towers were never built. From what I've heard after this tower was built Durham put height restrictions on land outside of downtown to prevent additional random skyscrapers being built in random suburban locations.

My family's always called it the "Duke cuke," but I've always preferred the "Pickle building," both because of the resemblance and because the architect was Durwood Pickle.

Back again...I was at Duke in 1986 when Tom Stone scored the winning goal in the NCAA soccer championship, Duke's first ever NCAA title. The nickname for the tower which always made me chuckle was 'Dallas phallus'.

The University Club is still in business, my class had its 20th reunion (DHS '91) there just this past weekend. Alas, I didn't get to attend, I would have loved to see how occupied the building is now. When I was in the NCCU Jazz Ensemble in the early/mid 90's, we played at the Club for a fundraiser. It was a nice place then. Never had the opportunity to visit any other offices.

The top of this building, with that thing sticking up, always reminded of a Prussian army helmet with a spiked top. In German, the army helmet is called die Pickelhaube. So Pickelhaube seems a great name for this building, given the pun on the English word, pickle. (Auf Deutsch, it's pronounced: pickle-how-buh).

I just shake my head when I drive by. What is zoning for, again? Just ridiculous.

From the appearances the last time we went in for a meeting, BoA has dramatically downsized their financial offices, mainly as a result of the acquisition of Merrill-Lynch. The University Club (universityclubnc.com) is still operating, as best I'm aware. My favorite name for the tower, was coined by WTVD's Don Ross: 'the big green weenie.'

Does anyone have an idea how occupied/unoccupied the tower is? I remember in the mid 1990s(?) there was a restaurant on an upper floor and when I bought my house in the late 1990s, Bank of America had a mortgage office in the building. I haven't set foot in the building since purchasing our house and have always been curious when travelling by if it's a ghost town in there or not.

Nice combination of different glass colors. I like the facade and the shape is quite interesting. The roof design reminds me of One Liberty Place in Philly.

Re: Leasing at the tower- It appears to be 91% leased right now, and is under contract for sale. Per the Herald-Sun The tower was 91 percent leased , according to data from Karnes Research Co. in Raleigh that had a list date of April of this year. The company reported 15,517 square feet of available space available for rates between $24.50 and $24.75 per square foot. Existing tenants include Wells Fargo Advisors, and Blue Cross and Blue Shield of North Carolina, the state largest health insurer. Blue Cross signed a lease for 45,000 square feet at University Tower in 2006. In the penthouse of the tower is The University Club, a gourmet dining venue. http://www.heraldsun.com/view/full_story/14793130/article-University-To…

Also known as the Texan Erection. We knew it was a mistake even back in the '80s.

It's called the Green Weenie. It is Durham giving Chapel Hill the finger.