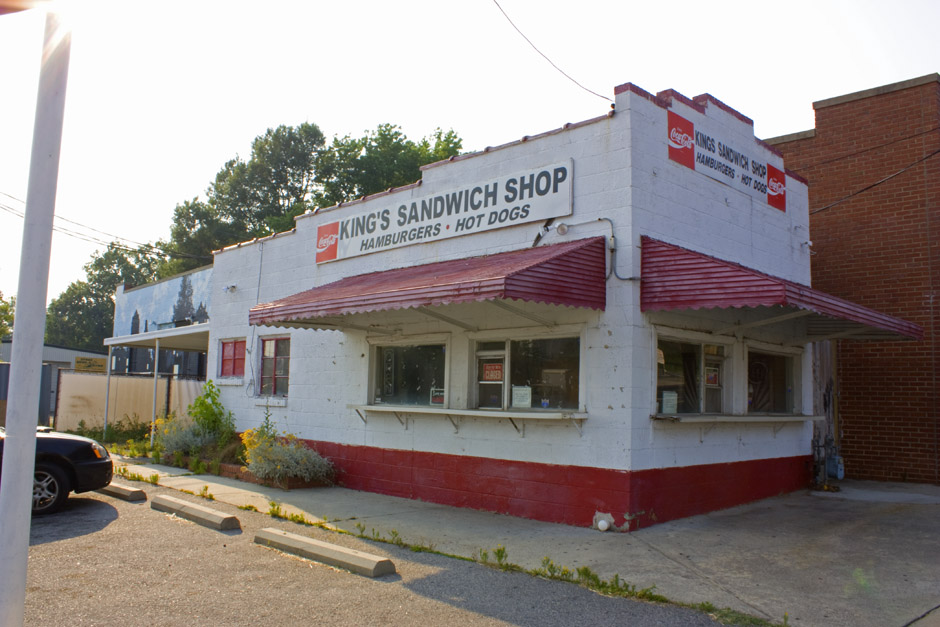 Unfortunately, a break with my usual pattern - no old photo today. But I couldn't let that stop me from writing up King's. From a search of old city directories, it appears that King's first opened around 1950-51. (But may have been as early as 1942.)

Eleanor Cox, who sent me some great remembrances of the curb market (which I added to that post) wrote me this about Kings's and other food places in Durham she remembers from growing up.

"Mama would send me to King's Sandwich Shop when she'd work at the Agricultural Building. My favorite was a grilled pimento cheese sandwich! Everything was great, though. Back then, Durham only had a handful of restaurants and that was our "fast food" joint. Bullock's was where some ate on a budget and the Saddle and Fox Steak House was where people went if they had money or a special occasion. I worked downtown at Belk's while still in High School and also held a part-time job at the Jack Tar Hotel for a short time. There was a great restaurant downtown at the corner of Corcoran and Chapel Hill Streets, and I can't remember the name of it. A Greek family owned it and they had reasonable "one meat, two vegetables" type offerings. Most of the Belk's workers ate there for lunch on Saturdays. The rest of the time, we'd go to Amos and Andy's for hot dogs or the pizza place next door (our first experience with pizza!)."

King's was one of the few 'institutions' that persisted into the modern era, still dishing out greasy-but-delicious fare. It closed in January 2007 - rumors have swirled, as they seem to do in this Central Park neighborhood of high drama but little action - that King's would be torn down to build some condo-y thing. But who knows. What is clear is that we're a bit poorer as a community for the loss of places like King's - places that provide a bridge between Eleanor's childhood and successive generations. 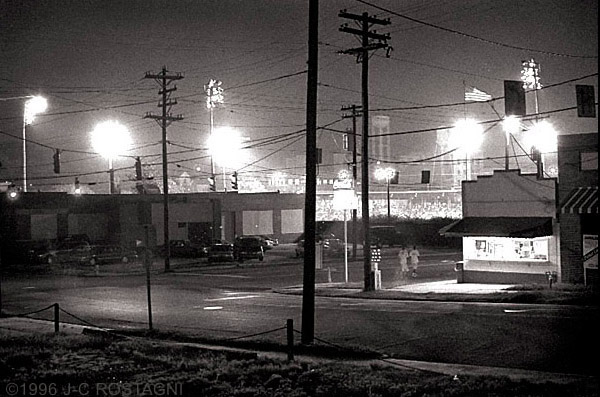 King's at night, looking west during the last season of Durham Bulls baseball at the old ballpark, 1994.
(Copyright JC Rostagni, via DIAQ)

This post is long due for a fuller update, but thanks to entrepreneur TJ McDermott, King's re-opened on August 3, 2010. 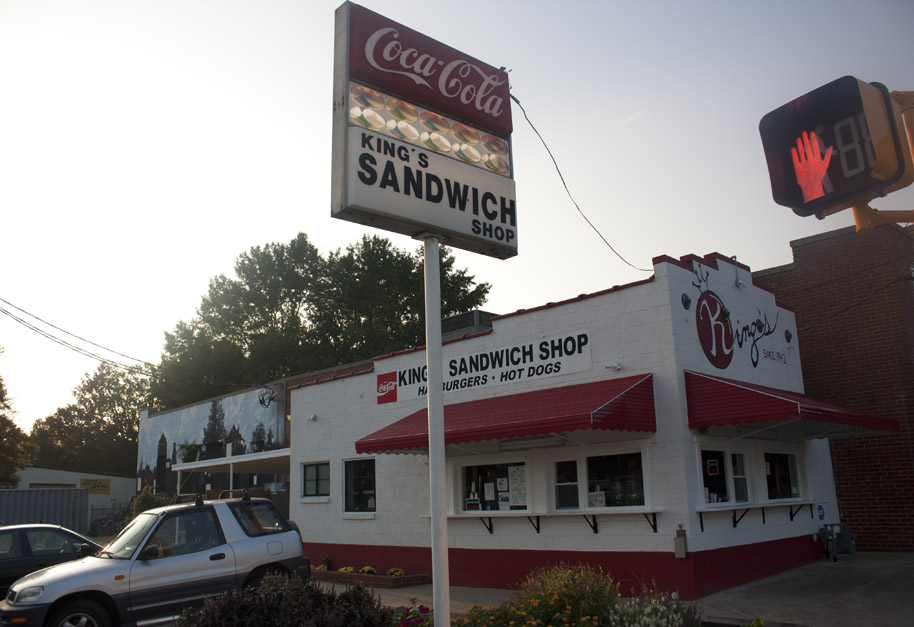 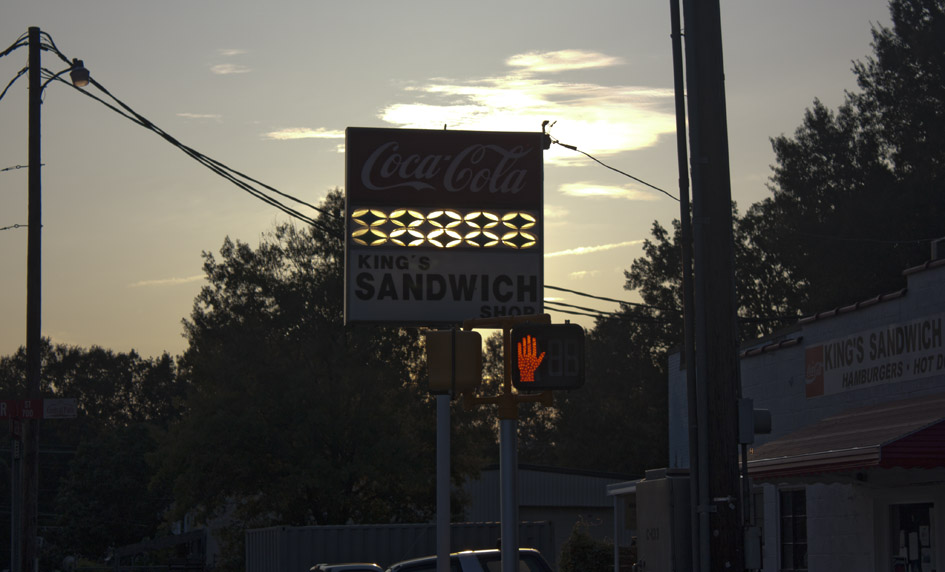 It's a thrilling and unlikely rejuvenation, and one which Durham has embraced wholeheartedly. Moving into 2011, King's has become a fixture in the revitalized and otherwise repurposed West Geer St. corridor, which has long included Manbites Dog and Stone Bros. and Byrd, but has lately seen the addition of Motorco, Fullsteam, the Trotter Building, and more.

Local ABC journalist Lou Davis did a nice video profile on King's on 03.20.11

There's a neat painting of

There's a neat painting of King's done sometime in the 1960s hanging on a wall in Watts Grocery.

My general impression of

My general impression of those rumors that King's would be torn down have always been that people just look at the general buzz in the area, and assume that any old building is in danger.

The problem with King's, though, is that it's on an extremely tiny lot. If someone is going to do condos on the King's lot, they'd have to take out Manbites Dog too, and I would think that rumor would have been buzzing a lot more hotly than the Kings rumor.

Not knowing it was about to close, a couple months before it went under I stopped in and overheard a customer and the staff talking about an off-the-menu item called a "hot cheese," that the customer remembered from her childhood there. It was chili and onions tossed on the grill, with a slice of American cheese dropped on it, then smeared off the grill using a hamburger bun. The newer version they did in the microwave, but I had to try one nonetheless. I can't say I'd make it a lunch staple, but it was tasty enough.

If someone ever re-opens Kings, I hope they'll serve the hot cheese.

People have tried contacting the owners of the building, to no avail. I've even tried, with no response at all.

I wonder how long it's going

I wonder how long it's going to take before come kind soul finds and gives G. a picture of King's taken in, say, 1962 or so? :)

I remember my dad taking me

I remember my dad taking me here over 30 years ago for hot dogs. By far I thought they were the best Hot dogs in town. I moved back to Durham last year and I was disappointed to see it closed. I was hoping it would re-open so that I could show my wife the best hot dogs in town. This is why you show show support for your small hometown restraunts and shops so they can survive over chain stores.

I attended the groundbreaking

I attended the groundbreaking for the renovation of the Durham Athletic Park a few weeks ago. King's got a nice shout out from the producer of Bull Durham, who said that the cast and crew ate there daily while filming in the ball park.

The loss of King's is a perfect example of that old cliche about not missing something until it's gone.

By the way, I think the painting that jhe3 mentions was done by Amy Tornquist's very talented husband.

I grew up in Durham

I grew up in Durham (1957-1974). I lived on Washington Street, and , ate at King's quite frequently. My favorite were the hotdogs all the way with chilie, onions and cole slaw. 25 cents, or, 5 for a dollar. The pidgeons were always a problem, but, then again, we fed them french fries. As a teen, I worked at was then called the Cow Barn on Washington St. It was actually a Pine State Farm Fresh Daity, but, it had this big fiberglass cow on the roof. In high school, I worked at Ken's Quicky Mart at Washington and Trinity Avenue. Back in the 70's, we called the Stop and Rob. On Saturday nights they had Pro Wrestling at the Durham Athletic Park. The wrestlers would stop at Ken's on the way to the park to but beer. Those were the days.

shame it's closed ... I'm coming back home for a visit and was hoping to take the kids there. I have such fond memories of grabbing a dog or a chili burger before a Bulls game, taking a break from Riley's paint store around the corner where my brothers, sister-in-law and aunt used to work.
Having a love of Durham and having grown up in and around downtown, I've commented on a couple entries posted here and I just have to say again ... THANK YOU for this site!

I LIVED IN DURHAM FROM 1945 UNTIL 1967. LIVE IN FLORIDA NOW AND WHEN I GO HOME I USUALLY WENT TO THE HOT DOG STAND

I met my lovely wife Tamara

I met my lovely wife Tamara in Durham. We would always go to Kings on Saturdays to get hotdogs.

That's were she got her nickname: "Mushy" (That's how she liked her hotdogs. Lots of mustard and a little onion.

I wish someone could reopen it. It's sad to see a piece of Durham history go. :(

I contacted the owner a few

I contacted the owner a few weeks after King's closed, looking to keep the business open, as I too, on occasion, loved the greasy fare and tea. He told me he had refused an offer of $250,000.00 but would not give me a price for which he would sell.

So now where do we get a good

So now where do we get a good hot dog? The Dog House dogs are too greasy even for me. Speaking of sandwiches, what was the place on East Main that sold pork sandwiches? There was something special about them, but I can't remember what exactly -- maybe they were steamed? Was it Jimmy's Grill? My grandfather would take me there and he would order up while I picked out comic books from a turn around rack for 12 cents each. Oh bring back those idyllic days!

We used to drive into "town"

We used to drive into "town" from Bahama on Friday evenings to have supper at the King's Sandwich Shop, which we simply referred to as the Ballpark.

Back then, in the late sixties, the menu was on a large sign above the awning. Hot dogs were 25 cents. They were the best.

After college and several years of avoiding that section of town, I went back. The hot dogs were still good, but not as great as they once were. It seems they had started using pre-made slaw.

It's sad to see the place closed. The only place I know like it now is the Roast Grill on West Street in Raleigh, just off Hillsborough Street. But even theirs are not like King's.

Another hot dog eatery in Durham, Amos & Andy's, had dogs as good as the ones at King's, but A&A closed many years ago. Paschal's Grill, on Holloway Street, used to have great ones, but I'm a bit intimidated to go there and see if they're still as good as they used to be.

My father and I ate there

My father and I ate there almost every saturday when I was in elementary school (Hillandale), junior high (Carrington) and most of my high school years, too (northern). First hotdog I ever had on a steamed bun. This is Durham for me. I miss it.

I went by King's the other

I went by King's the other day and said to myself something ain't right There was a new sign on the side of the building
written in script.
Somebody must be going to reopen it.
As long as the hot dogs are the same I will be back.
Later,
Rob

The Durham Herald Sun had a

The Durham Herald Sun had a short comment about the reopening of Kings Sandwich Shop. You can see the article at: http://www.heraldsun.com/view/full_story/6713944/article-Old-favorites-c...

I live next door to TJ, the

I live next door to TJ, the guy who's remodeling and reopening King's. He's doing a great job with it, and we're all super excited!

When I was a child, My father

When I was a child, My father always brings us to King's Sandwich shop. Their Burgers and Hotdogs are the best. Now that I have my own kids. I want to bring them to that wonderful place.

Oh my. I was so glad to see

Oh my. I was so glad to see this post. Been looking for pictures of this place for a while. This was where everyone who skipped school at Durham High went to eat. Me, I was partial to the "hot cheeses" which was some concoction of chili and cheese on a hamburger bun that was then grilled. So greasy and so good. And so CHEAP. You could fill up for a dollar. I have endeavored for a small portion of my life to re-create those sandwiches and guess what? No Can Do. Sigh.

I am 56 years old and grew up on Kings hot dogs. I always got mine with mustard/chili/slaw, but my father got his "all the way".

I remember many a cold night waiting outside the window for them to call my order!

I remember they had a "Judog" on the menu. It was a hot dog without the weiner. Today, the term"Judog" would be deemed offensive, but back in the 60's and 70's folks in Durham didn't think of it that way.