914
Vickers Avenue
Durham
NC
Cross Street
Morehead Avenue
Year built
~1910s
Year(s) modified
2000s
Neighborhood
Morehead Hill
Use
Bed & Breakfast
Residence
Building Type
Residential
Can you help?
You don't need to know everything, but do you know the architect?
Log in or register and you can edit this.

The property at the northwest corner of Morehead Avenue and Vickers was originally occupied by Mrs. WH Berry, who, when James Cobb bought her property in the mid 1910s, moved her house to 713 Parker St.

Cobb worked for as an executive for Liggett and Myers; like Stagg and George Watts Hill, he built his new home in Morehead Hills reasonable proximity to the Liggett (formerly Duke) factory. 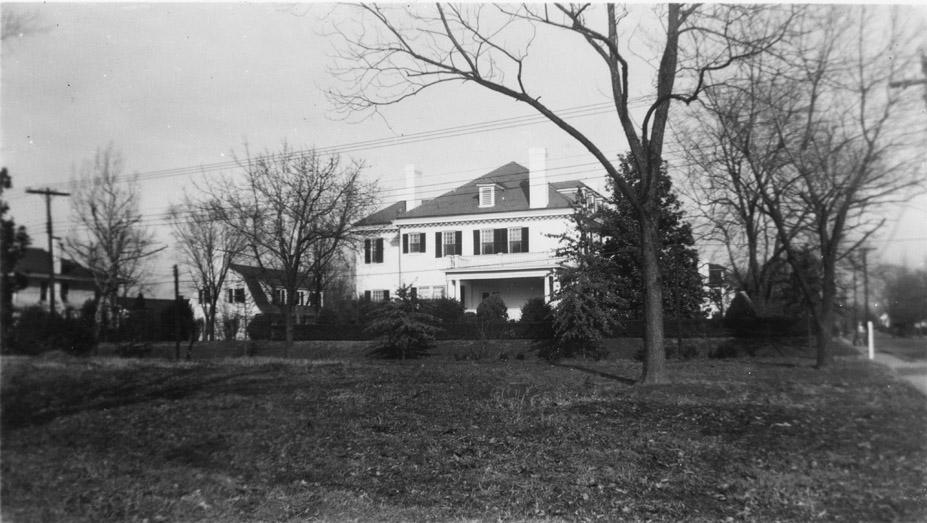 Looking north from across Morehead Ave., 1944

Per the Historic Inventory, the Toms family lived in the house as well; Toms was also affiliated with Liggett. The importance of the two families to the tobacco company is probably best exemplified by the existence of a "Cobb Warehouse" and a "Toms Warehouse" amongst the Liggett buildings. 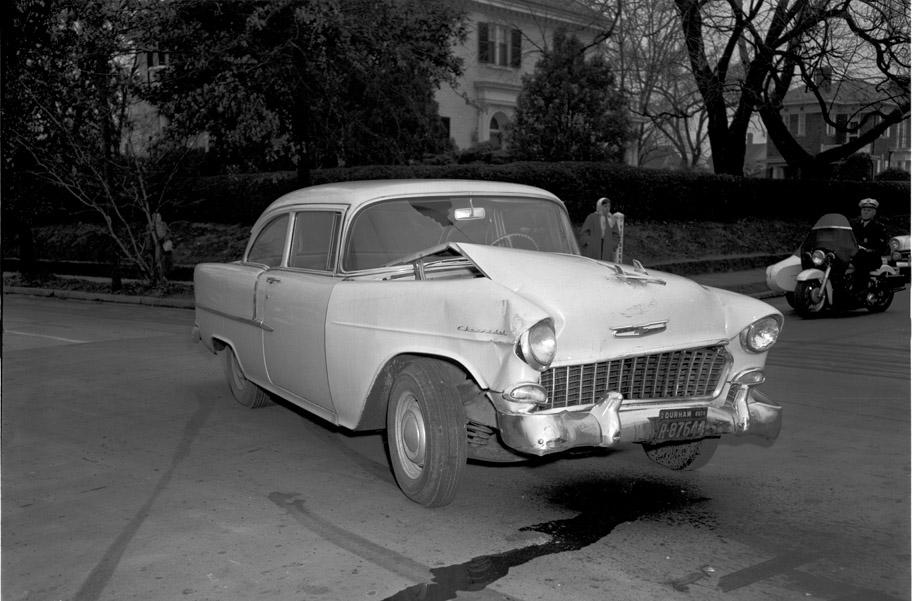 If you can block out the wrecked car in the foreground, a view of the front of the house, 01.14.56.
(Courtesy Herald-Sun)

(As an aside, notice the old street signposts - the white obelisk on the corner. These white posts with black vertical letters for the street name parallel to the face were the ubiquitous form of neighorhood street sign in Durham until the latter half of the 20th century. I only know of one still in existence.) 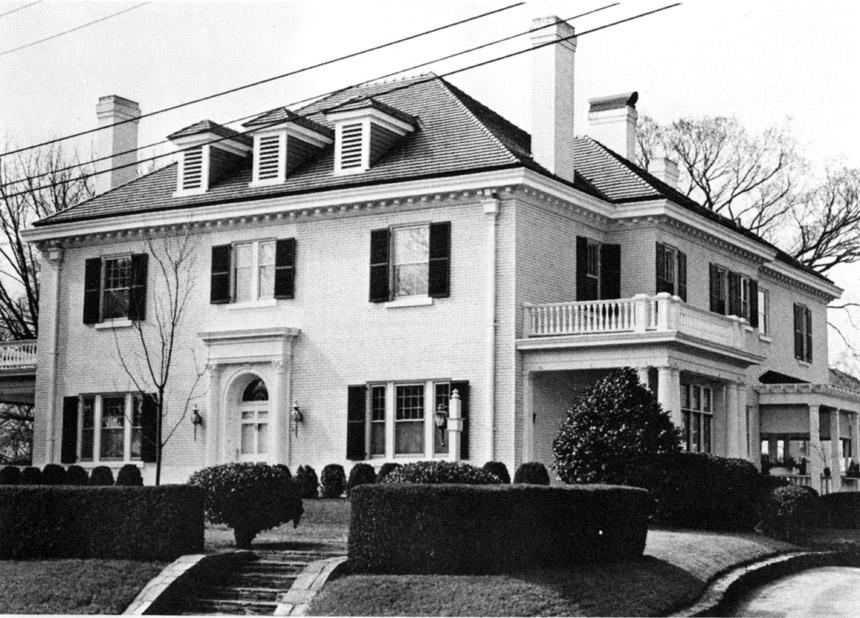 The house was renovated and converted into a Bed and Breakfast several years ago, called Morehead Manor. 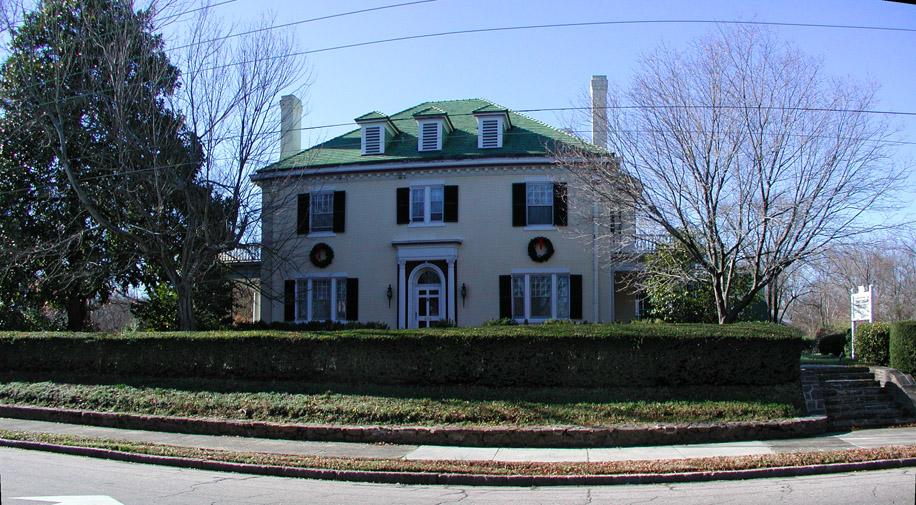 For a "prominent executive" with a warehouse named after him, and a "prominent house" in Morehead Hill, surprisingly little is written about James S. Cobb. Married Nannie (Orr) Cobb. One son was John Blackwell Cobb, an All-American basketball player at UNC-Chapel Hill from 1924-1927.
Read More 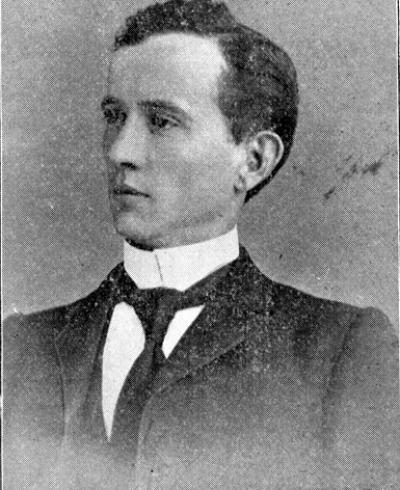 I visited someone at Morehead Manor a few years ago and was surprised at how much I hardly felt like I was in "Durham".

In retrospect, I realize that I spend almost all of my time in homes that have a familiar feel and scale (whether from the Trinity Park set or the public housing set (my aunt used to live in a couple of different places in the Cobb St. area) or in the cookie-cutter-suburbs.) I don't often visit places on the scale of Morehead Manor, much less in Durham. It felt like another world.

Very cool... like the use of the accident scenes for the structures in the background!

Is the one signpost that you know of the one for Jackson Street in front of the Forest History Society building?

In my hometown, New Orleans, a number of the grand homes had been given over to an institutional/business use - I have very fond memories of our branch public library, which was located in a mansion on the scale of the Hill House or Harwood Hall, given to the city in the 1940s. Thus even as a child of moderate (or minimal means) you could experience and wonder at the architecture.

Ah - a fellow urban sleuth! You are exactly right - that is the only one I know of. If anyone happens upon another nestled deep in a neighborhood, I'd love to know about it.

Glad you like the serendipitous view of the house; I darkly joke that I troll for tragedy when looking for pictures, as it's the main reason people took pictures of the landscape/buildings.

Hi, just came across your blog and wanted to say what a great blog it is! I would love to have an "Endangered Bloomfield (NJ)" blog, as our town, which has a historic district and a number of totally unprotected historic resources that are at risk for teardowns, demolition by neglect, etc. This blog is a great way to keep people informed and inspire interest in historic buildings.

Just realized my sentence had no end..."as our town...has too little disregard for its history" is how it probably should have ended! That's what I get for making too long a dependent clause! (Yeah, I'm a grammar nut too).

Your story of the New Orleans library reminds me of my own similar joys as an undergrad at Brown. Many of the school's buildings are former mansions (some of them ~200 years old when I was there) converted into, say, the English Department or the Applied Math Department or the Romance Languages House. Though the term 'adaptive reuse' was unknown to me at the time, I loved the living heck out of what it meant.

Adding to the fun for me was the fact that I grew up in modest means in Asheville NC, which didn't have many buildings older than a few decades when I was there.

Speaking of adaptive re-use, I also enjoyed the same at the School of Science and Math where I was a "pre-undergrad". I think those years are the only time I've ever had 14-foot ceilings in my bedroom. (Along with an oxygen line connection next to my bed. And a sink in the corner of the room. Oh, wait. I have a sink like that right now.).

Speaking of mansions turned into institutions, and other mansions or old buildings fallen down, I'm SURROUNDED by those right now in Merida MX. I'll try to blog some of them just for you.

Growing up in Asheville, many of those old black on white pillar signs were still around in the neighborhoods around the Grove Park Inn. I don't know if they're still there or not.

Although I no longer live in Durham, I specifically remember an "obelisk graveyard" on the grounds of the old water treatment plant on East Club Blvd.  They were lined up Stonehenge fashion to block traffic down a dirt path (Left side going away from Durham).  Are they still there?  I post this serendipitous note in response to equal curiosity in them on this post.  Should there be an "oblelisk" blog?

There's an obelisk at the corner of Pettigrew and Blackwell. I've seen a few hidden around town. I'll start keeping a log as I can't recall the locations.