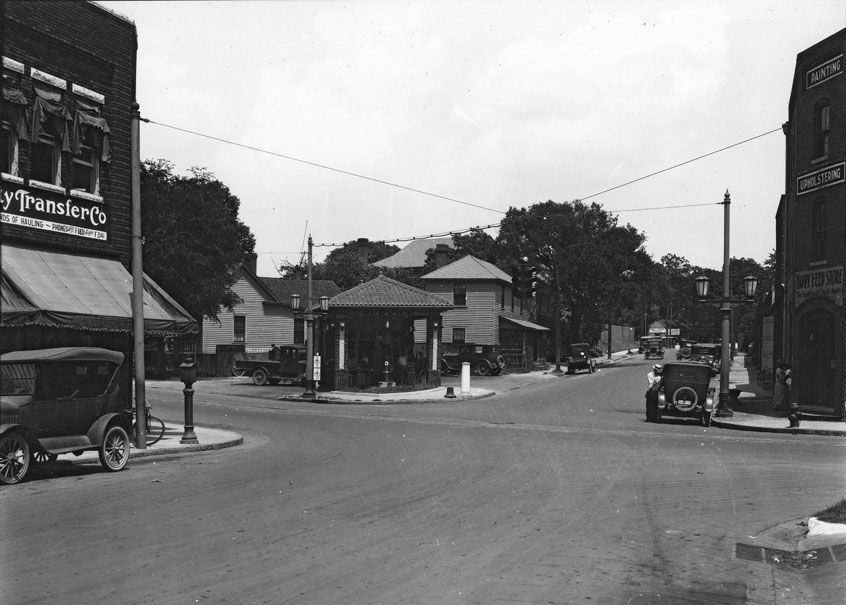 A residential neighborhood during the 1890s-1910s, the intersection of North Mangum and East Chapel Hill was, by the 1920s, the 'border' between the growing downtown commercial area and the residential neighborhood. In the above pictures, you can see the houses just beyond the commercial structures, as well as the roof of the Fuller School, the taller roof just east on East Chapel Hill. The end of East Chapel Hill at Cleveland St. can be seen one block away, prior to the construction of the later First Baptist Chuch.

As noted yesterday, 'filling stations' were a frequent harbinger of the impending transition of the neighborhood. The earliest pumps were simply curbside machines located downtown. The dedicated stations, such as the one above, began to sprout up during the 1920s in Durham, frequently locating on previously-residential corner lots. 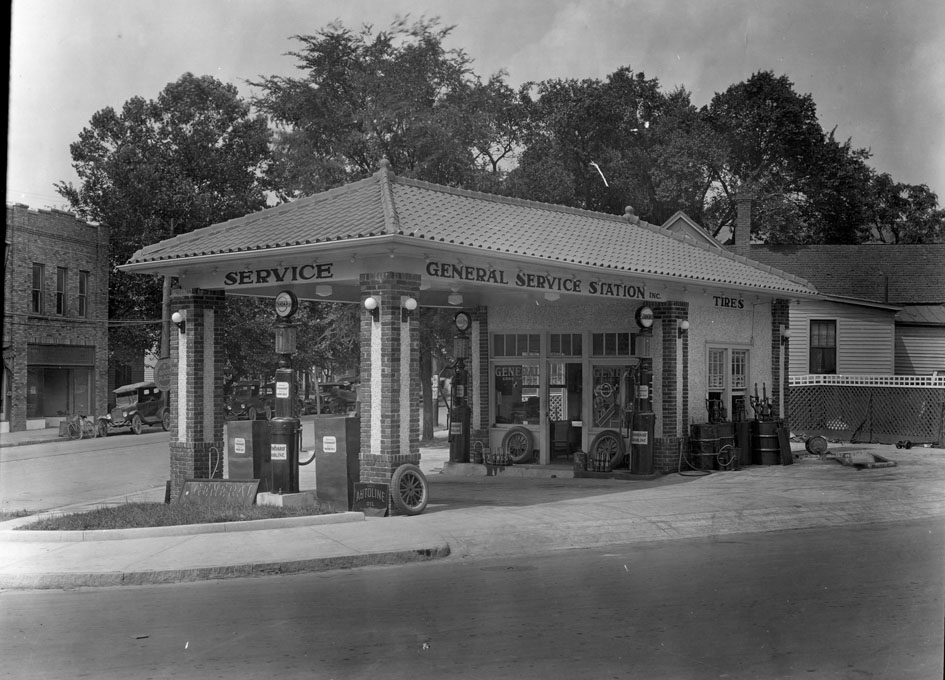 This commercial expansion tapered off somewhat in the 1930s and early 1940s, but the later 1940s and 1950s rekindled the growth, and the massive adoption of cars for transportation meant more and larger parking lots. 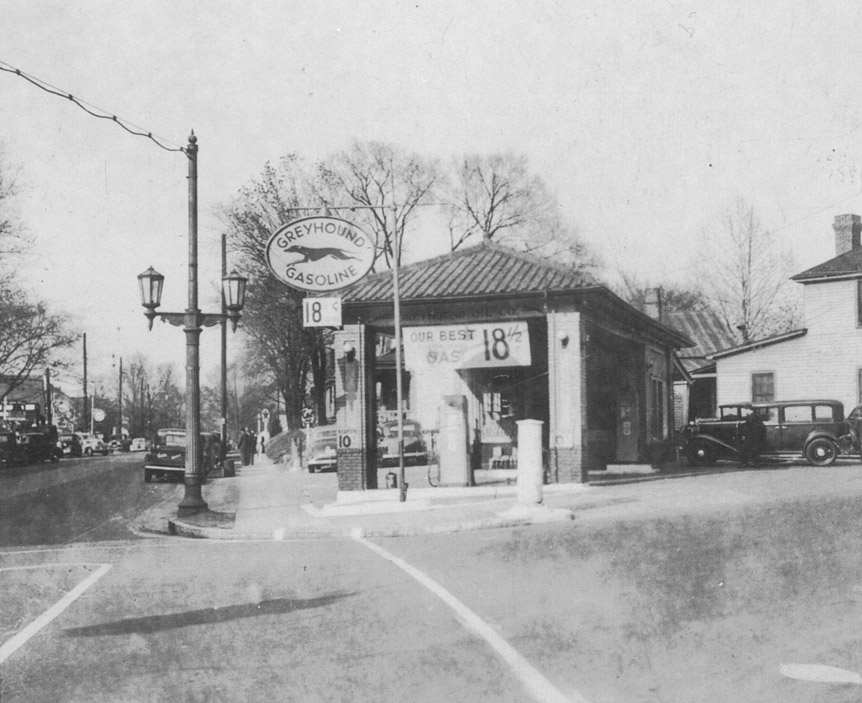 By sometime in the 1950s, the service station and houses had been torn down and replaced by a grocery store, which most likely was a new location for the A&P that had been one block away. 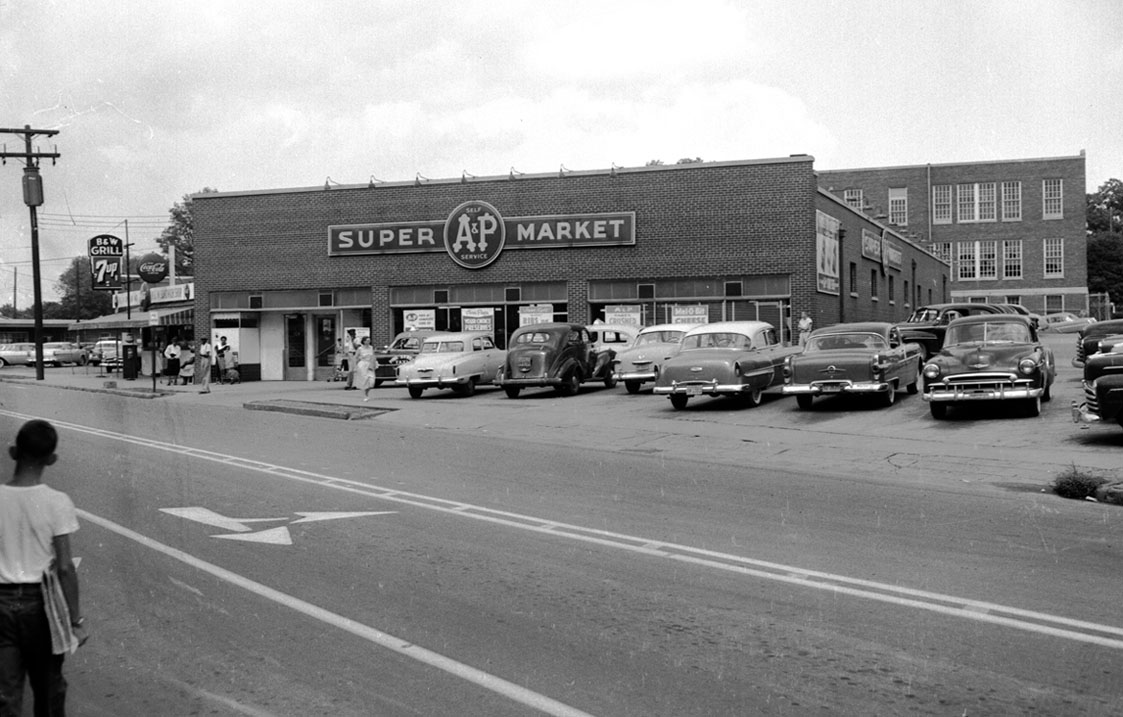 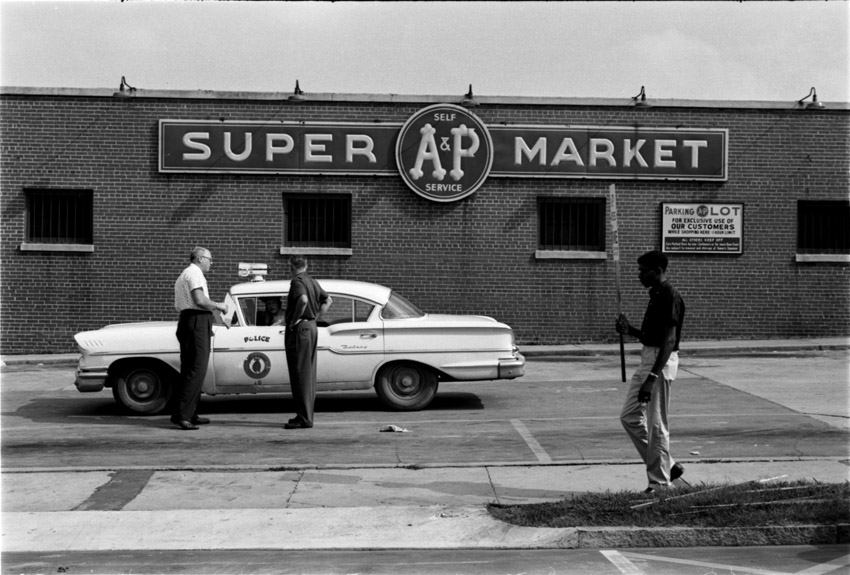 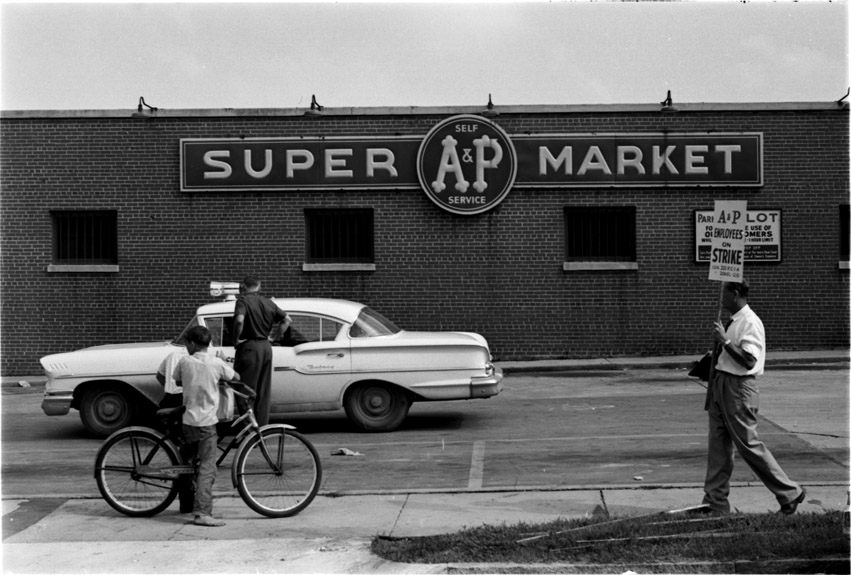 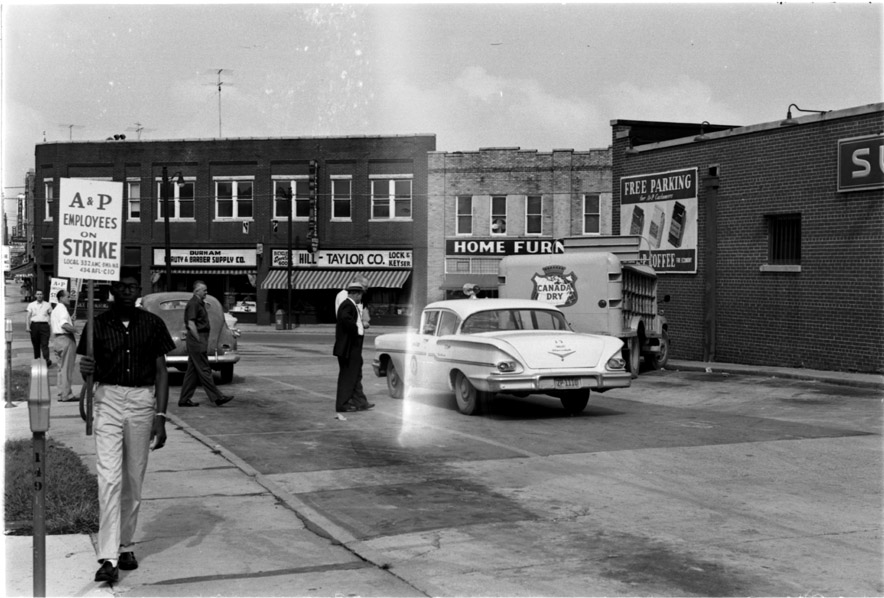 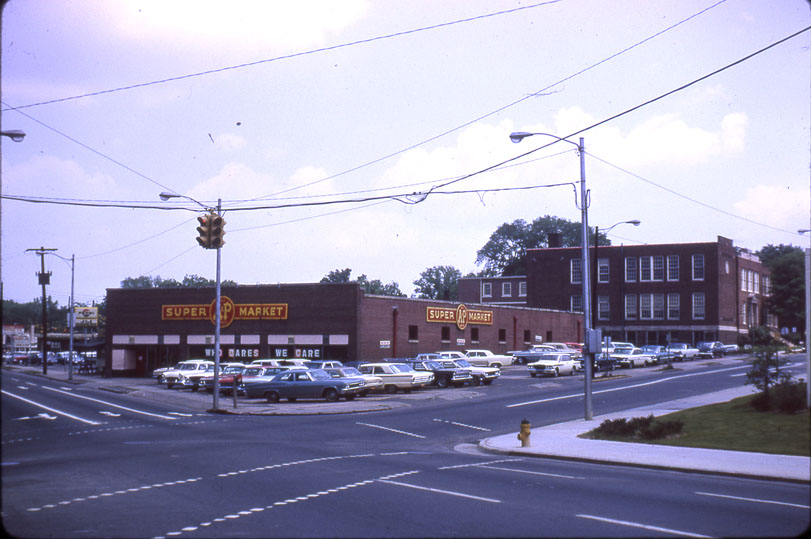 A&P appears to have had the supermarket monopoly in Durham, from what I can tell.

By the 1960s, at the urging of the Downtown Merchants' Association, the city council had agreed to push forward with the Tarrant plan to create a high-capacity circulation loop around the downtown core (what would be left of it) which would allow congestion-free access to downtown, and to the continuous ring of scrumptious parking lots and decks immediately inside the loop.

This was going to save downtown from the mall.

Thus the A&P was torn down. 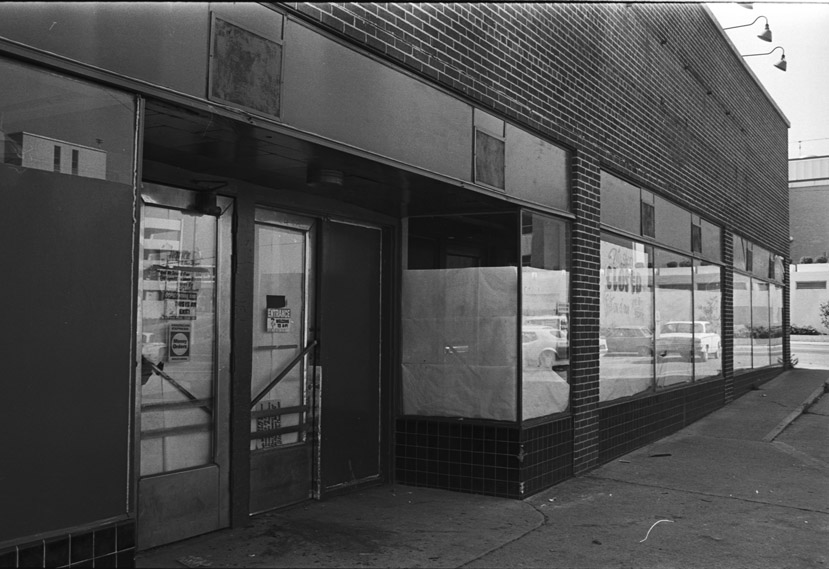 The A&P closed; the sign on the door has fallen down - it says that it will be closed "03.26.7?" I can't read the last number, as it's blocked by the door.
(Courtesy Herald-Sun) 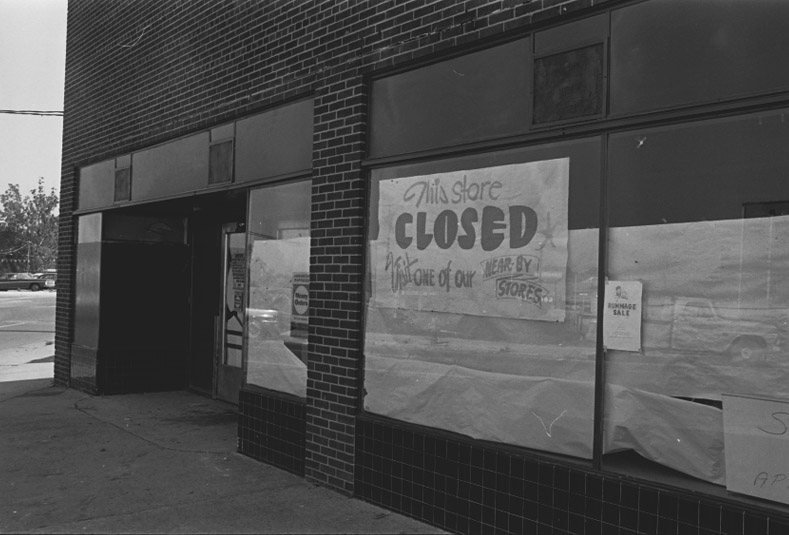 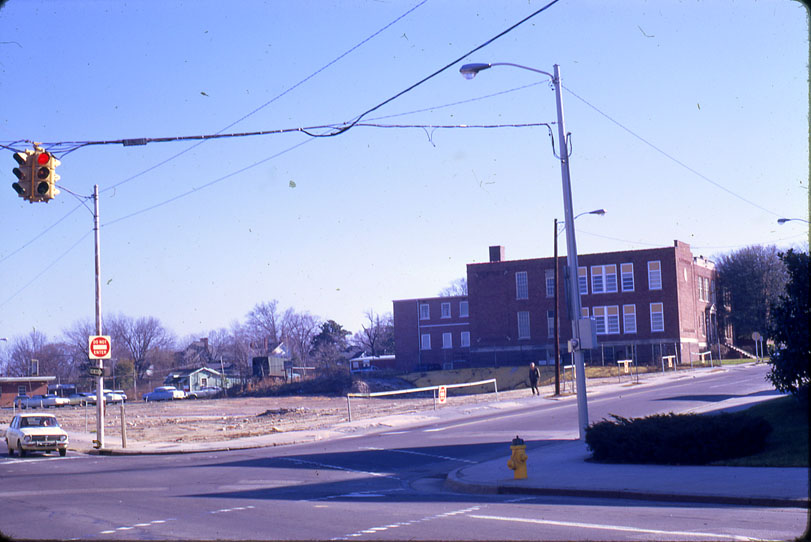 And a tortured piece of roadway was built, connecting Holloway St. (which had previously continued down what is now City Hall Place) with the terminus of Morgan St. at Mangum.
This lopped off the corner of this city block, which the city decided would be a park - a new Rotary Park. The previous Rotary Park had been located at Market and East Chapel Hill, prior to the construction of the Washington Duke Hotel. 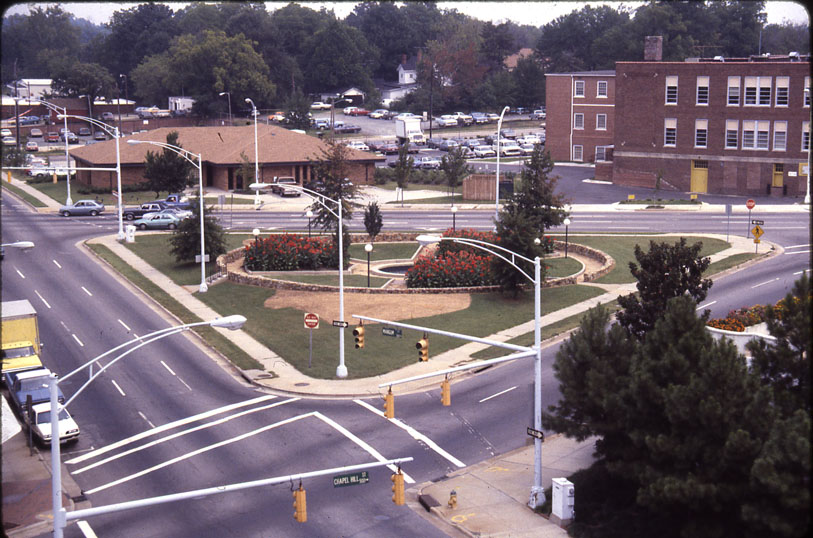 The amputated corner of N. Mangum and East Chapel Hill, 1990.

It's still gamely attempting to be a park today. 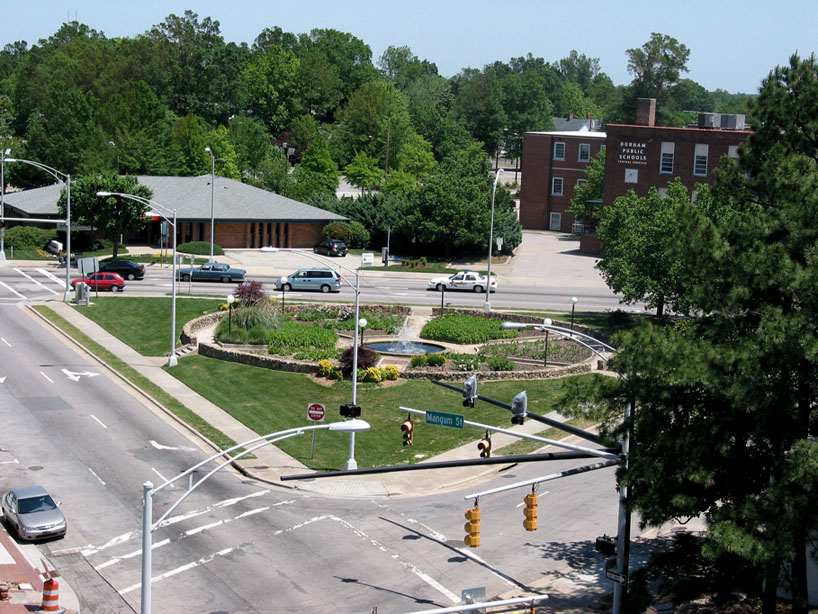 If someone asked me to give a Powerpoint presentation about how the city misunderstands public space, this would be my first slide. It doesn't matter what you do with this space - people will never use it unless you tame the roadways and improve the buildings around it. The primary public use this gets is by the occasional person who takes a bath in the fountain.

What a joke. How can the city

What a joke. How can the city say this is a park when you must risk your life just getting to it? The city seems intent on creating public spaces downtown that are public-unfriendly. I love that downtown is the focus of so much attention these days, but those horrible islands of brick everywhere make me want to scream. This is the South folks. You cannot create a large expanse of brick intended to serve as a park and expect folks to relax there in July. It's too HOT! Plus, all that red brick is overkill.

This is considered a "park"?

This is considered a "park"? I've driven by it for years and never really knew what it was suppose to be -- basically wasted space, or space too small for surface parking. With traffic on all sides, I'm not sure how much benefit anyone gets from this "park". And to think, I'm now driving over what use to be a downtown grocery store -- something downtown really needs now with folks moving in.

AnonsI agree with you both -

I agree with you both - this park is not useful. I've argued a few times on here that the city's approach to public space downtown is failure-prone because the approach is to take leftover spaces - after demolition or after slicing space with roads - and to try to turn them into public spaces. While this may be the cheapest way to generate public space, the space really isn't all that usuable, bringing into question the actual savings.

Our new plaza of 10,000 bricks is a fine example. It is built out of the space leftover from the actual project, which was the desperately-needed Foster-Corcoran connection. As a result it is simply too big and ill-defined. Perhaps if "We Want Oprah" gets torn down someday, someone will build something up to the new streetline, and it will work.

This space will never work as a public park, unless it remains after a radical reworking of the landscape around it. It would be best to scrap what's there and stick a big piece of public art on it, something of a scale that can be appreciated from afar/by cars going by. That would help provide visual interest and definition to this too-flat space.

In addition to the roadway

In addition to the roadway mess surrounding it, the biggest problem I have with this corner is that gawdawful excuse for a building to the south of it, the City Hall Annex. The day that thing meets the bulldozer, I'm popping the champaign. (Or maybe some French cider -- same fat cork, and I think it's tastier... but I digress...)

With the rumblings from DPD about how they're outgrowing their building, and the fact that I'm sure city hall is starting to get tight, I keep dreaming of the day the Annex goes down, and a new building with a new primary entrance for all of city hall gets built on the north side, fronting Chapel Hill St. If the street there were two-way and had some raised, textured pavement in front of it, that park might actually work.

I think that would be one step to making the park, potentially work. I think it is just too small for the amount of asphalt. I think if you fixed the CHA, fixed the DCVB building site, narrowed the street, added street trees - it might work.