Just can't leave the Roxboro corridor for long without some buildings disappearing. I don't know whether it's the angle of the sun on the east side of town, or just some kerosene that accidently keeps getting spilled on some matches, but James Marvin Bradford's buildings keep burning down. In the picture I took for the last two buildings of his to go (502 and 504 Roxboro) you can see the edge of 305 Elliott on the right side of the frame. Here's what it looks like today 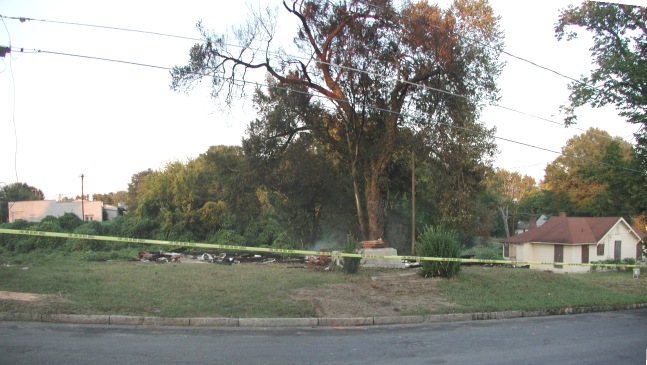 Still smoldering, yet. So to go back and review Mr. Bradford's property holdings, here's the map I drew back in August 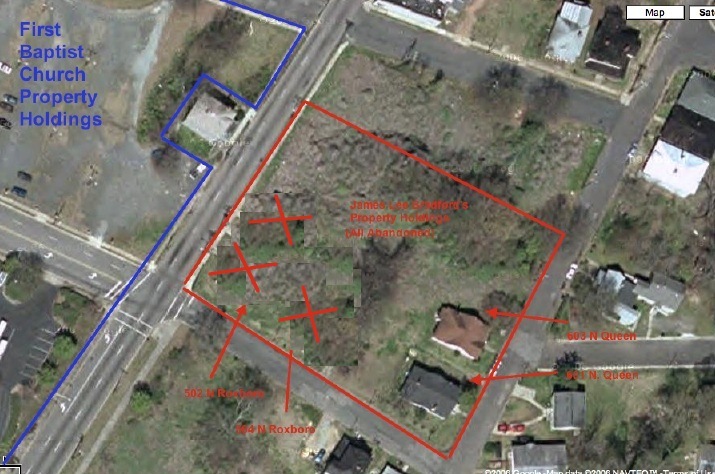 All that remains are the two houses on Queen Street that I've previously profiled. Will anyone prevent these from burning as well? The city or county are the only two entities that can change this dynamic. They throw up their hands, and say "there's nothing we can do" - as if the regulatory environment we live in was delivered on stone tablets from Mount Durham. Of course there is something we can do - change the regulatory environment to protect houses like these. Update 9/13/07: James Bradford, still owner of this trash-strewn lot, angrily confronted me at a community meeting to say that he let the fire department burn down this house for training - didn't I care about the truth? No independent confirmation of that assertion.

I drove by here on my way

I drove by here on my way home tonight and saw the smoldering ruins, and was hoping against hope that another house in the neighborhood hadn't burned down. So, those three houses have burned down in a matter of a couple of months, and then earlier this year two of Fireball's abandoned homes also burned up, also on Roxboro. There are just too many coincidences here to ignore. Abandoned home owned by slumlords are suddenly burning down. Houses that are a part of Durham's history, and could have been restored to their former glory. It really disgusts me to see this happening.

It is disgusting that people

It is disgusting that people would burn houses for personal gain. What distresses me even more is the seeming apathy/fatalism. What would it take to get the city to take this problem seriously (or even acknowledge that it is a problem...)

While the city might not think it's in their interest to make sure these houses aren't burned down, I know a group who would take an interest: the insurer (assuming the owner has insured them and is torching them to get money). Insurance companies have their own investigators for things like this. What I don't know is how to find out what insurance company to contact. I'll ask someone who might know what to do.

Excellent point, and if you can find out some info, please post/ let me know. If there is a central contact point (trade association or the like) it would be in the interest of not only the insurer for those structures, but also surrounding structure that are at risk of burning as well.

Are there people living in

Are there people living in the two houses left on Queen street? It seems like they are in danger!

I had always wondered about

I had always wondered about the possibility of slumlords purposely burning down their own houses. I thought of two possibilities about why they would do this:

1. For the insurance money. But I have a hard time believing any any insurance company would insure these delapidated, worn out of buildings.

2. To get rid of the existing structure in order to be able to "start fresh". If the house burns down (due to squatters, or some other unknown cause) then the owner won't hear much complaint when the building needs to be bulldozed. They now have an empty lot on which to erect a new, soul-less, generic house that they can once again use up until it too will be discarded, burned up, etc.

Or it could just be apathy. The slumlords own so many homes that a few dozen boarded up homes, empty lots, etc don't really matter when they own hundreds of abused, ill-maintained homes that continue to bring in income. And those slums are rented to folks who, because of their being unable to afford anything else, or fearful that they may be deported if they make a stink, won't complain about the squallor. It's vicious cycle with the slumlords preying on some of the most vulnerable homes and people in our city.

I think that only two things will bring and end to the slumlords - rising property values, where it's just too advantageous for them not to sell, or they simply die off.

Thanks for your comment - the slumlords are such a problem in this city. There seems to be no end to the abuse they will heap upon the rest of the world. I don't know if anyone would insure these houses or not - probably unlikely. I think your second theory is most likely. I don't know what the city does about clearing the remaining material from the site - I assume they put a lien on the property, but perhaps it isn't as expensive as a full demolition, so it's the cheapest way to get rid of the building - ?

I don't think prices will ever get high enough to match the insanely inflated expectations of the slumlords. They have it in their heads that they are going to make a killing someday on the property, and there is nothing preventing them from waiting it out. When you can finally get to these guys and ask them a price, it is always outrageous. They have no reason to sell.

I think the penalty should much, much higher for repeated code violations, etc. Let the city hire contractors to repair the property, place a lien on the property for the cost of the work, and recoup on the property tax bill. If the SL pays, fine. If they don't, property goes on the auction block.

That possibility notwithstanding, I generally consider death the only possible refuge, but you then have to hope that the grown children don't want to carry on the slumlord tradition for another generation.

Another possibility occurred to me since my previous comment: If this person is disliked for being a slumlord or because of criminal activity (I believe someone mentioned that possibility earlier), maybe someone else is burning down the owner's houses as revenge. That might also explain the city's reluctance to get involved. I present this just as theory; I certainly don't have any evidence.

By the way, I haven't heard back from my insurance friend.