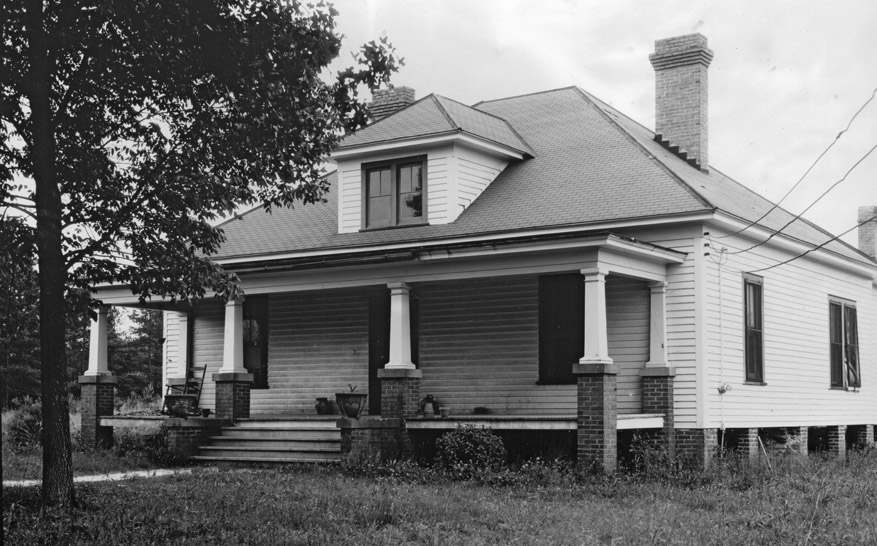 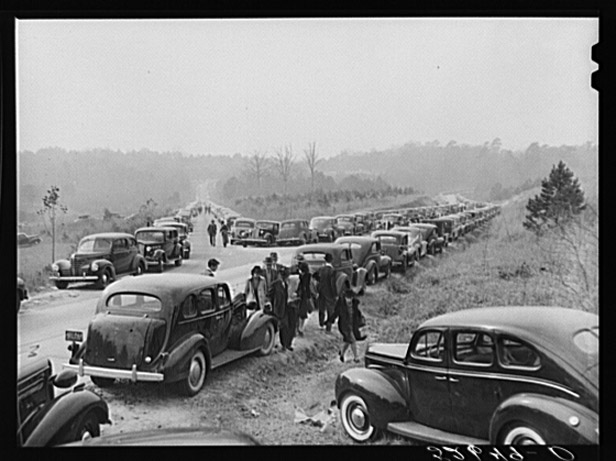 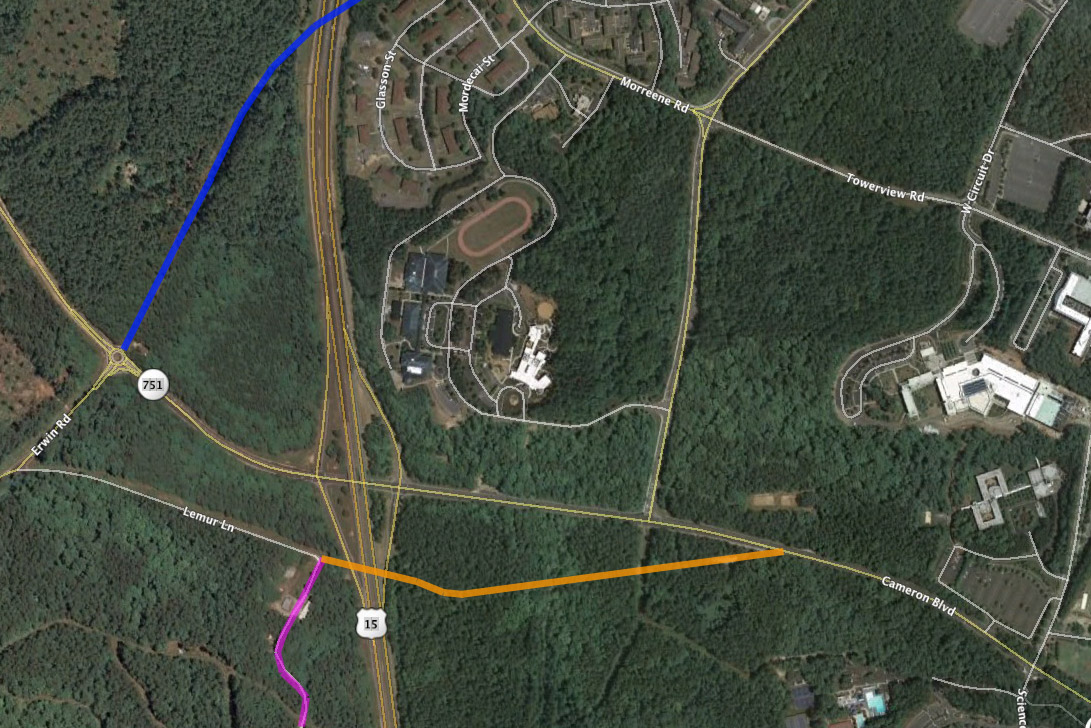 The orange is the path of Rigsbee from 751 to its intersection with the former Forest Road, highlighted in pink. The former continuation of Rigsbee is now called "Lemur Lane", as is the former Forest Road leading south to Cornwallis. Part of the former path of Erwin Road is shown in blue. After the 15-501 bypass was built in the 1950s, Rigsbee Road was severed. Extensively catalogued by Duke Forest management in the 1930s, many of the houses along Rigsbee and Forest were lost - I don't know whether there was a program of demolition after Duke acquired the land.

The eastern portion of Rigsbee Road has been a part of the Duke Cross Country trail (around the Washington Duke golf course / hotel) since it was built in ~1990. If you park off of 751 and walk counter-clockwise down to the bridge, the trail takes an abrupt left turn. However, you can continue straight, which will take you out to 15-501. Along this section, the old asphalt of the road is still visible. The western portion of the road remains accessible from Old Erwin as "Lemur Lane", and serves as the access to the Duke Lemur Center. Where it meets 15-501 is the entry to the Center. The road leading through here to Cornwallis is the former Forest Road. At the intersection still stands one vestige of the old character of rural southwest Durham - the TE Rigsbee house. 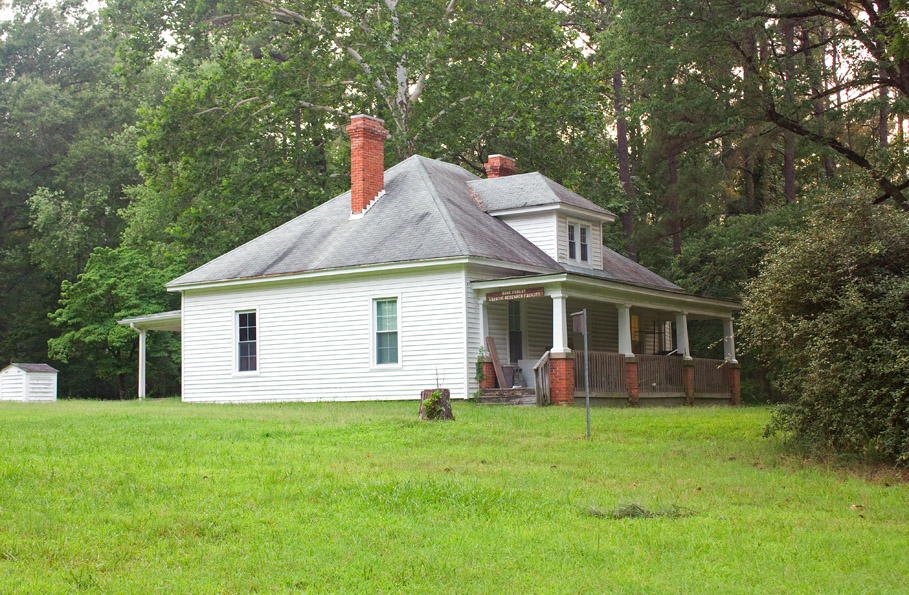 I think the house labeled in

I think the house labeled in the post as "Log Cabin - In NE corner at intersection of NC 751 and Chapel Hill Rd." is still there. Here's a Google Street View shot from a similar angle: http://tinyurl.com/2cewu9n

Here is the tax record for that property: http://www.ustaxdata.com/nc/durham/photo.cfm?parcelID=121891

Looks like the chinked logs have been covered with siding, the shed dormer on the front has been modified to have a peaked roof and taller windows, and the rough-log posts supporting the porch roof replaced with standard milled posts. But the location, form, and chimneys match well.

awesome - this one of my

Thanks for the cool post. My lab (and several others) uses the old TE Rigsbee house as a research building. Very little has changed it seems.

GREAT post! I've always wondered about the old road system in that area.

So what is the bit of

So what is the bit of concrete road that veers north from Cameron Blvd. between Erwin and the 15-501 interchange? I always thought it must have been the original Erwin Road. Its now been covered, recently, by mounds of dirt from some Duke project.

I know this will seem like a stretch, but "JH Shepherd Place #1 - Along Rigsbee Rd b/t Mud Creek and Cornwallis. Second house from Cornwallis" might be the house at approx. 4228 Erwin Rd., before renovation. The front porch columns look identical from Google Street View. Is that possible?

And is it possible that "Log Cabin - In NE corner at intersection of NC 751 and Chapel Hill Rd." still exists, at 2943 Chapel Hill Rd? Here is a Google StreetView pic from the same angle. And the county tax report for that property.

There is one old house

There is one old house visible on Bing aerial view just south of the Lemur Center on the old Forest Road -- perhaps the Bud Smith cabin?

Also, it looks like the parking lot for the Duke cross-country trail is itself part of the old Rigsbee Road?

I live in "Bellevue House -

I live in "Bellevue House - On Forest Rd about 100 yards west of Erwin Road"!
Very exciting and I would love to know how to dig up some more pics of the place way back in the day...

jess -- can you help us locate the house on a satellite image at either Google or Bing maps?

An excellent posting, thanks.

An excellent posting, thanks. The Lemur center has a log cabin for rent and I will bet it is the Bud Smith cabin on Forest Road at the end of the B/W pictures.

i thought this is the

i thought this is the bellevue house, although it is east of erwin... perhaps i'm mistaken...

All the cars parked along the

All the cars parked along the road in the first photo are likely there for a Duke football game.

I don't know what they do now, but up through the early 1980s, the state troopers parked everyone along the side of the road for more than a mile north and south along 751 (Cameron) and up "new" Erwin.

Of course, they had a lot more fans back then. When they played UNC they'd put temporary stands around the concourse and in the end zones and pack 50,000 in Wallace Wade.

Does anyone know where

Does anyone know where "Whip-poor-will Manor" was? Richard Nixon claimed to live approximately 1.5 miles away from West Campus, in a 'shack' in Duke Forest.

hi. curious about your

hi. curious about your interest in this and especially the last photograph. I was raised in the house in the background of the 4th of july picture. wondering if you are anyone i know??