After his first warehouse on the south side of the 100 block of E. Parrish St. burned in the 1880s, EJ Parrish built a second warehouse that eventually extended most of the length of the block, although it was set back from Mangum St. with a grassy area in front and places to park your mule along the north side of the building. 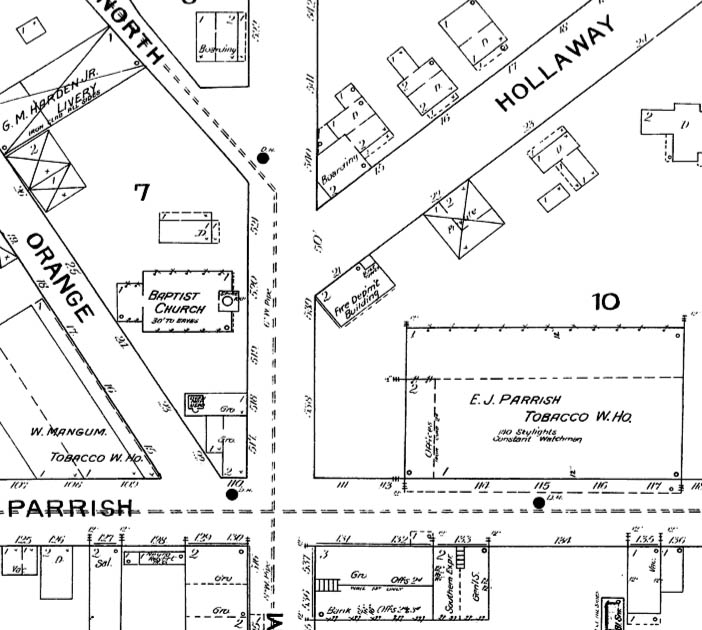 Above, the intersection of Parrish, Mangum, Orange, "Hollaway" (now City Hall Place), and North (later Rigsbee, now parking lot) - 1893. Fire Station #1 is located just to the north of the warehouse, and the Parrish building is just to the south. First Baptist Church is located west, across Mangum St.

Below, a fuzzy bird's eye view shows the EJ Parrish building (with some interesting protruding bays on the front that I hadn't previously noticed), the Parrish warehouse, and the first Fire Station #1. Trinity Methodist Church is in the background. 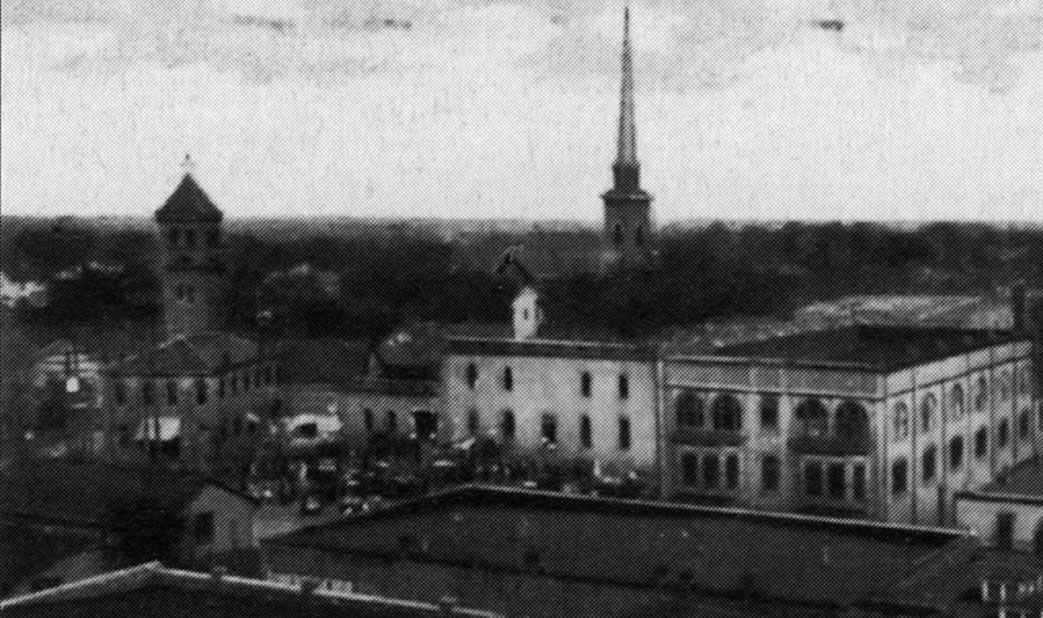 Looking east, 1905.
(From "Images of America: Durham" by Steve Massengill)

By the January 1913, the Parrish warehouse was torn down by RH Wright. He announced that month he would tear down the ware house and begin construction on "six of the handsomest business buildings in the city - four [of which would] face Mangum street while the other two [would] face Parrish street" to be completed before 1914.

Above, looking north from the 100 block of North Mangum St., around 1914. On the right, the EJ Parrish Building, and just beyond that, the northeast corner of Parrish and Mangum. There is a scale outside the front door, and it appears that there is a sign that says _Levin on the Mangum St. side.
(Courtesy Duke Archives)

Public Hardware was an early tenant. By 1923, they had moved a few doors east on Parrish St., and this building became the Rogers Drugs Co. 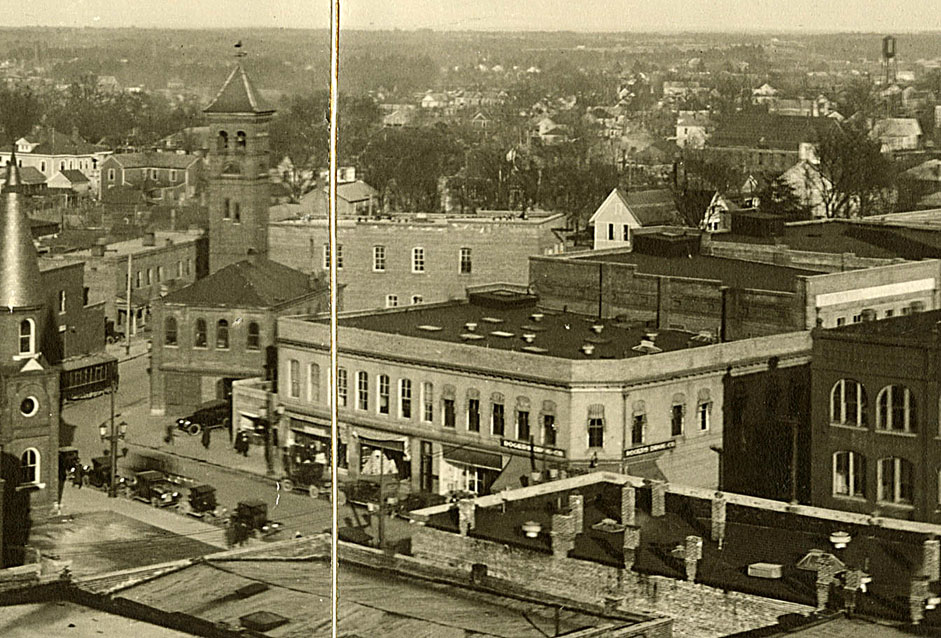 Above, the view looking east-northeast, 1923. Moving left to right, a bit of the First Baptist Church is visible at the left edge of the picture, the first Fire Station #1, Rogers Drug, and the EJ Parrish building. ( I surmise 1923 because Trinity Methodist Church is missing in this picture - it burned in January 1923 and was rebuilt in 1924).
(Courtesy Duke Archives)

The Rogers Drugs Co. was the longstanding occupant of this building during the 20th century, A small view of their sign is visible at the left edge of the shot below, looking east on Parrish St. ~1940. 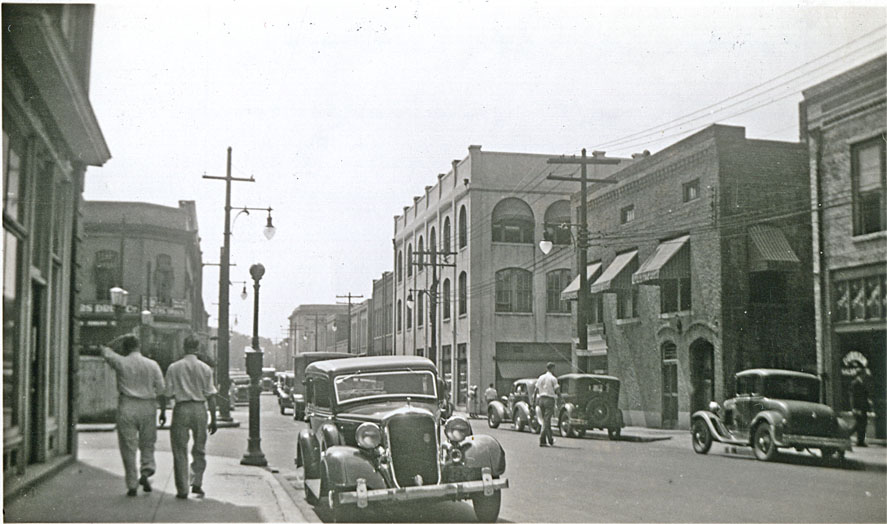 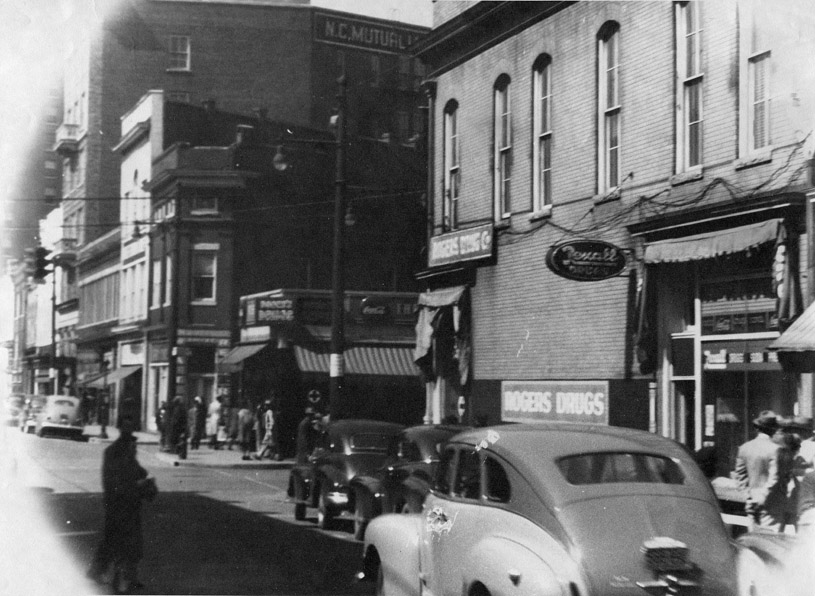 A shot of the south side of the building looking west down Parrish St., 1950s.
(Courtesy Bob Blake)

The business lasted into the late 1960s. 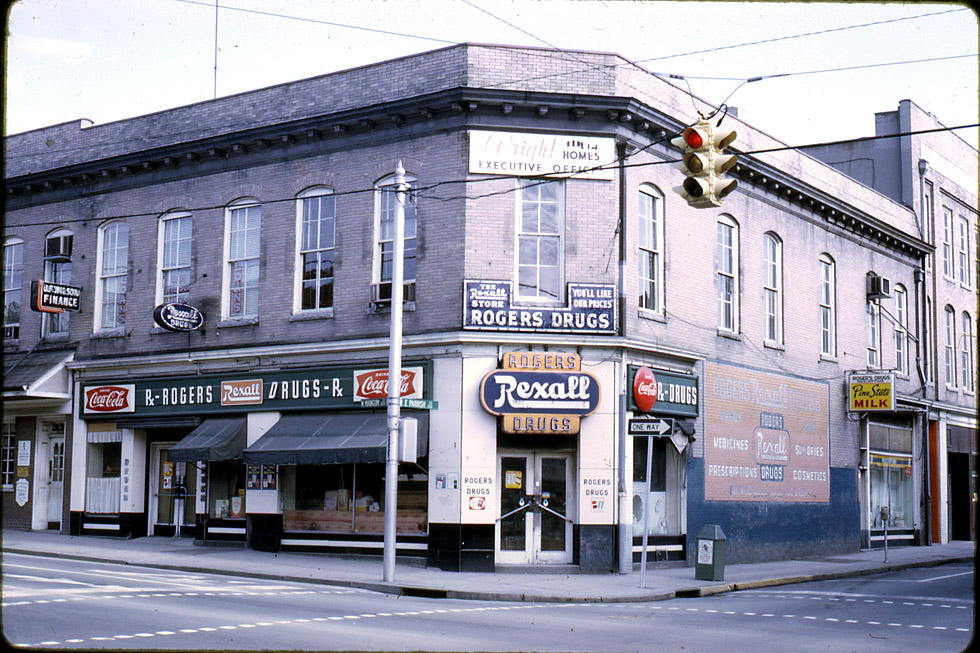 A 1970s redo deprived the building of its original windows and much of its variety of entrances on the first floor for a feast of plate glass, but helped meet the wig needs of Durham. 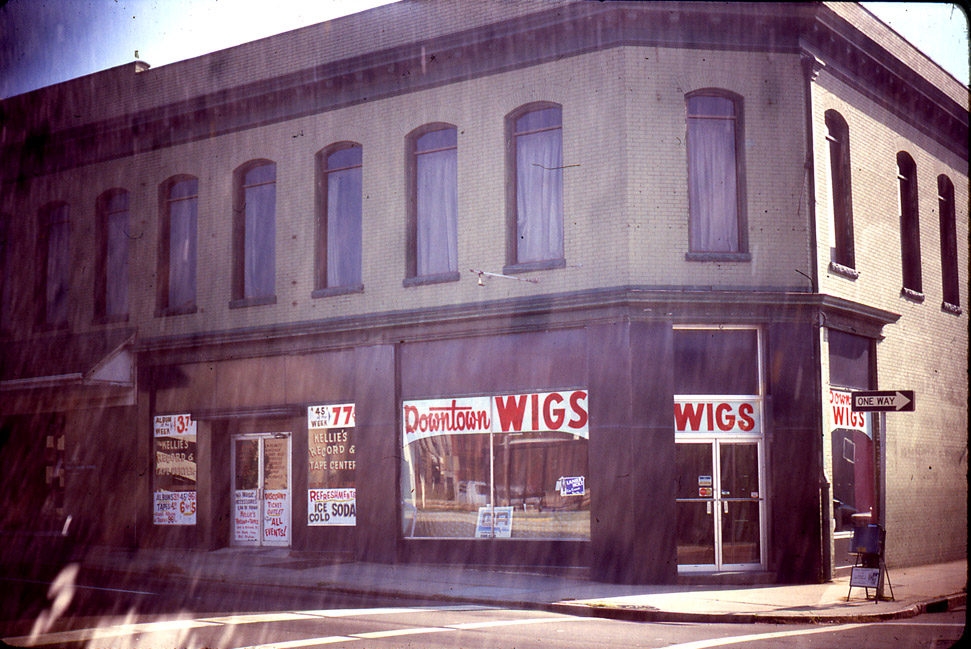 Another redo in 1980 reformulated the entryways with arches and different doors. 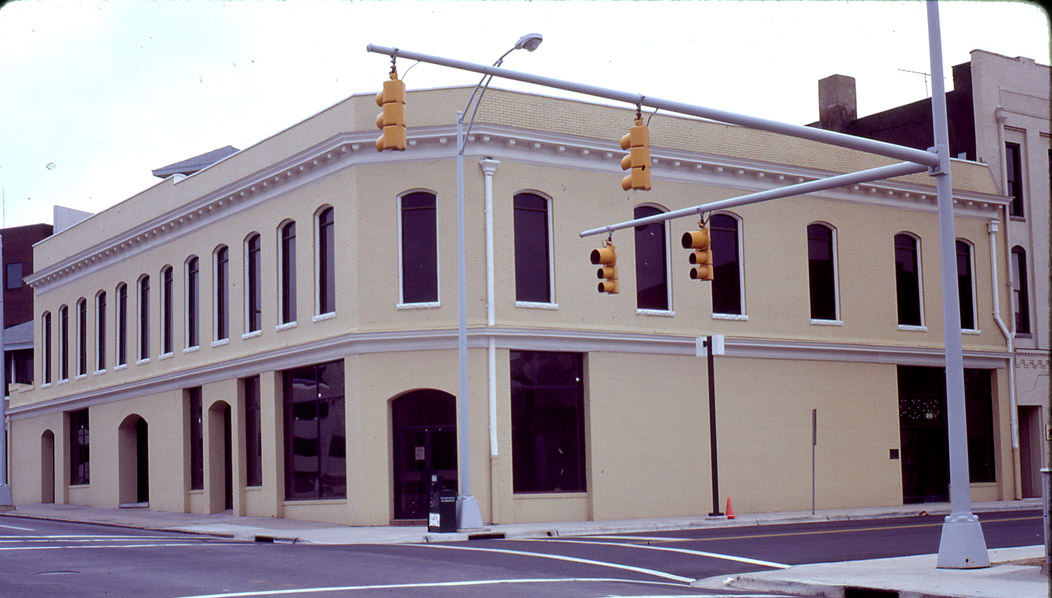 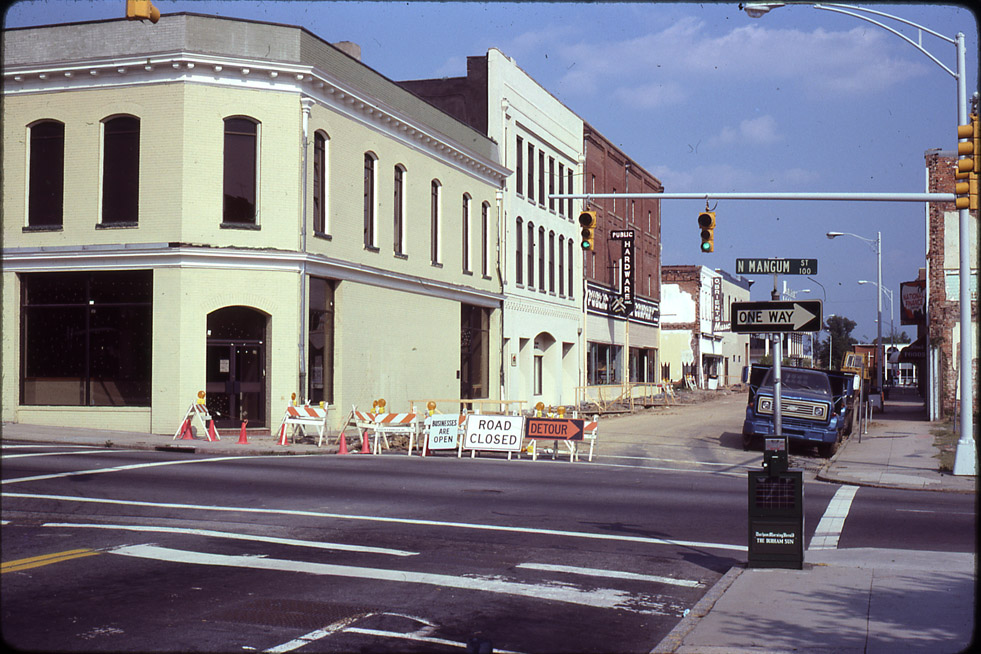 I think this was a Verizon building for a number of years in the 1990s. Most recently it has been occupied by Preservation Durham and the Parrish St. Advocacy Group. It is one of Greenfire's many buildings, and they are in the midst of a renovation of this building, fire station #1, and 107 E. Parrish St. (adjacent to this building on E. Parrish St.) 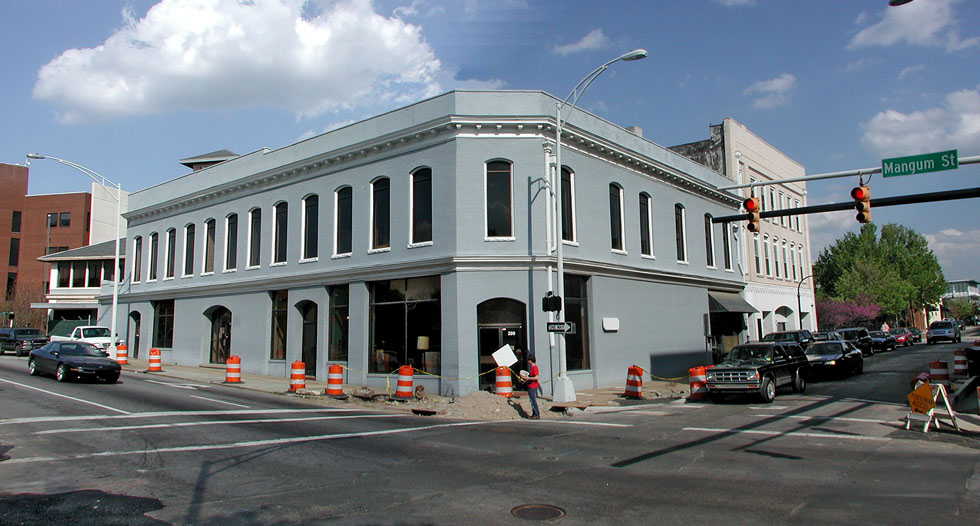 Greenfire appears to have nearly completed renovations on the old Rogers' drugstore, and has "For Lease" signs up. They've done a marvelous job with the exterior, returning to the original form windows, which elicits a sigh of relief after looking at this structure with terrible solid 1980s tinted windows for decades.

I found this blog the other

I found this blog the other day and miraculously a million of my unanswered questions were answered. I've been reading all the archives and I am amazed at all of the work you've done for this blog. It's good stuff. Sometimes it's fun to read and sometimes it is painful but it's all educational.

I was wondering if you've heard the latest news about 610 Buchanan, the lacrosse "scandal" house. They are trying to sell it but some of the neighbors want to tear it down because it's an "eyesore." I looked at it through public records and thought it looked pretty cute. What do you think?

JulieI'm so glad that the

I'm so glad that the blog has been useful to you - thank you for your kind description.

No, I hadn't heard that anyone wanted to tear down 610 N. Buchanan. It seems like a nice little house, probably later vintage than most of the houses along there (?1930s-40s?). Perhaps Duke wants to unload it at a more reasonable price than most of the ones they bought. I'd snap it up if so.

I like the 1910 downtown street scene: garbage here and there, piles of bricks... wait! It looks like downtown Durham circa 2007!

Hey, Gary - Thanks to our

Hey, Gary -
Thanks to our conversation last night, I checked out these incredible shots of where the new Dos Perros is going to be going in. Some of the geography/buildings confuses me though, despite your excellent direction in the photo captions. Would love to learn more when you have the chance! And thanks for putting this together!
Diana Deal