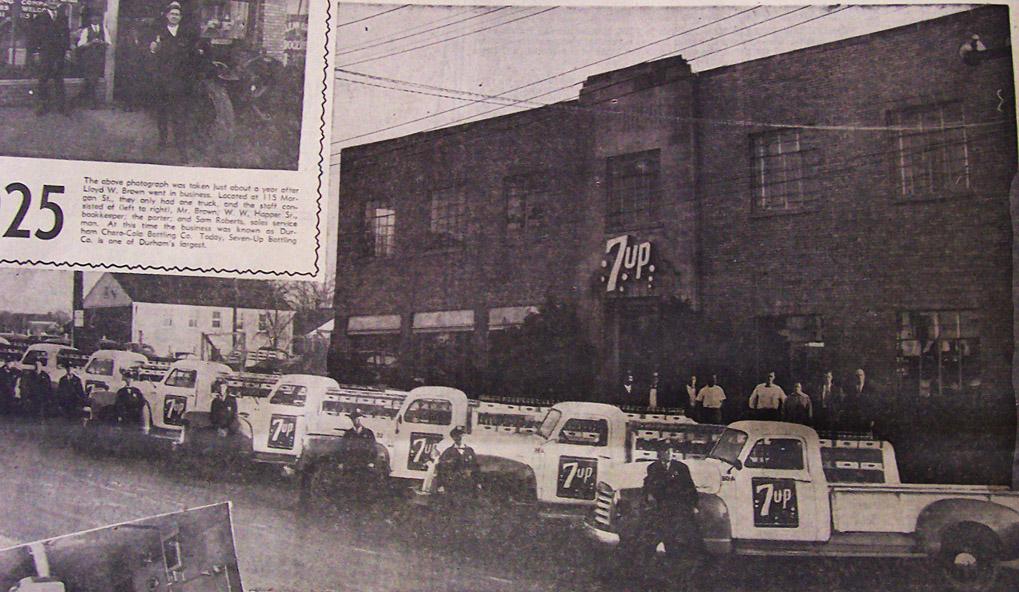 Lloyd Brown started his bottling company on Morgan Street in March 1925, but in 1934 moved to a building on North Church St. when he outgrew this structure. This space soon proved too small as well, and he constructed a new, 'modern' bottling plant at 321 West Geer St., which opened June 1, 1939. Mr. Brown evidently only operated this plant for a few years, selling it to the Royal Crown Cola Bottling Company in 1945.

It appears that the RC Cola bottling company operated out of this building for many years following this sales, later becoming Tru-Ade Bottling Company and then Carolina Beverage Packers by the 1970s. The building is still listed as owned by the "Seven-Up Distributing Company", and it last housed the "Winter Mountain Bottled Water Co." 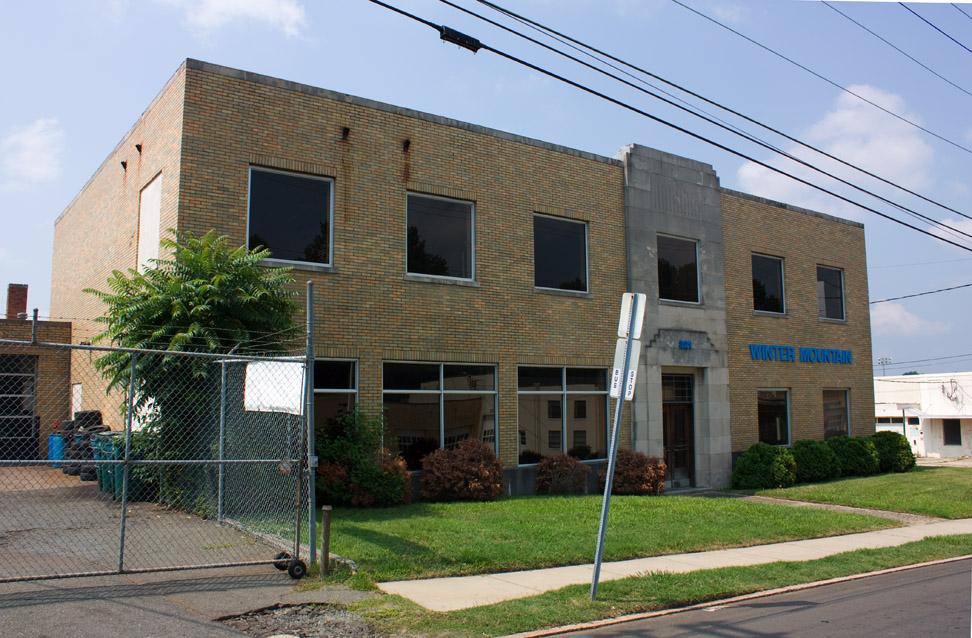 Update: As of August 2010, the Fullsteam Brewing Company is open in the rear portion of the building. It's fantastic to have a brewery once again update the long tradition of producing beverages in this building 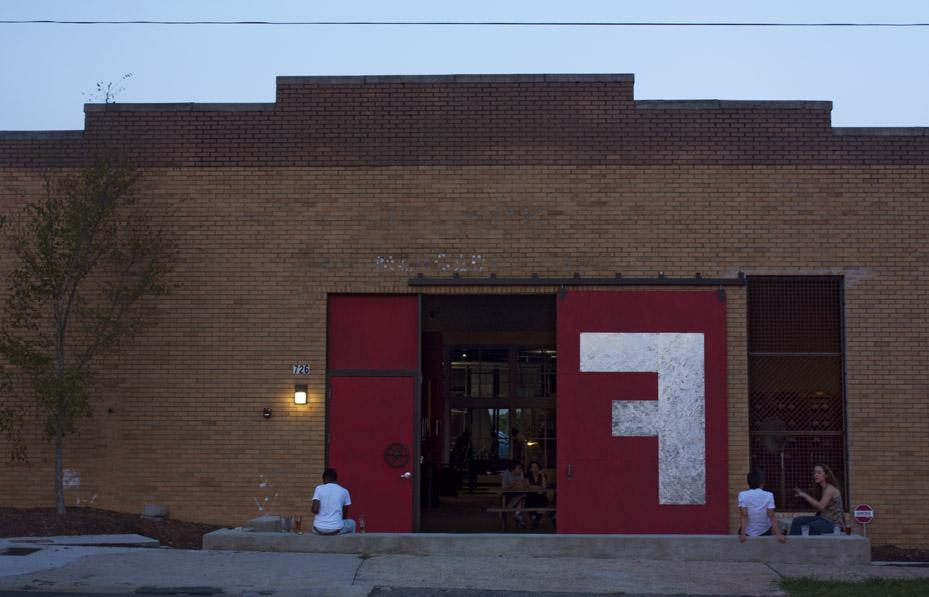 Lloyd Brown constructed this two-story Moderne-style brick building in 1939 as a Royal Crown and Seven-Up Bottling Company. Brown’s first bottling plant, built in 1925, stood on nearby Morgan Street. The plant bottled both Royal Crown and Seven-Up sodas until at least 1963, with Tru-Ade sodas added in 1955. From 1955 to 1960, the C. T. Wilson Construction Company operated here as well, likely in a rear addition.

The large plant, the largest building in the historic district, occupies the block between Rigsbee and Madison streets. The main two-story block, six bays wide and four bays deep, faces north to W. Geer Street. The flat-roof building is constructed of load-bearing brick, with a greenish- yellow brick veneer on all four elevations. The large metal casement windows on all four elevations have been replaced with plate-glass windows in metal frames. An elegant Moderne- style entrance bay forms the focus of the otherwise utilitarian design. The central entrance is set in a shallow projecting pavilion of cast-stone that terminates in a stepped parapet with a central decoratively incised panel. The double glazed-and-paneled wooden door has a decorative aluminum transom with a stepped parapet above it. One other decorative feature is the high cast- stone base on which the first-story façade windows rest. The façade has a cast-stone coping and cast-stone window sills. The west side elevation has three windows and an original garage door opening in the rearmost bay that has been infilled with a single door. The east elevation of the main block has three large windows that are boarded up.

The east side elevation has a ca. 1950 one-story wing of identical brick, configured as an automotive maintenance shop with an office in the outer corner and three garage bays in the remainder of the wing. The garage doors are wood paneled, with glazing. Windows are metal awning type. This wing, with a street address of 319 W. Geer Street, is not in place on the 1950 Sanborn map, but is listed as “Weeks Motor Company’s used car department” in the 1950-1951 City Directory. Later auto shops that operated here include Mike's Transmission, Clark and Sorrell, and now Parrott's Automotive.

The original rear one-story wing of the main block, eight bays deep, was used for bottle storage. It appears on the 1937-1950 Sanborn map. The west elevation of this wing contains a pair of windows, three metal garage bays, and a pedestrian door flanked by another pair of windows, while the east elevation has a covered two-vehicle loading bay and two garage bays. In the early 1970s an additional bay was added to the rear. This is a steel-frame structure with a yellow and brown brick veneer west wall that extends as a parapet roof. The west elevation contains a single tall metal garage door. The east elevation has one open loading dock and one garage bay, and is covered with corrugated metal siding. The rear, south elevation is brick veneered, with a metal double-door. Fullsteam Brewery now operates in this section.

The first floor interior of the two-story block consists of a narrow center hall with a Colonial Revival-style wooden stair to the upper floor, office spaces to the west side, and a bottling room to the east side. The upper story contains a large rear room, accessed from the first floor by a rear service stair. All floors, walls and ceilings appear to have original finishes with the exception of the office area, which was paneled in the mid-to-late twentieth century. The one-story bottle storage and garage spaces to the rear have bare brick walls and concrete floors that appear to be original. 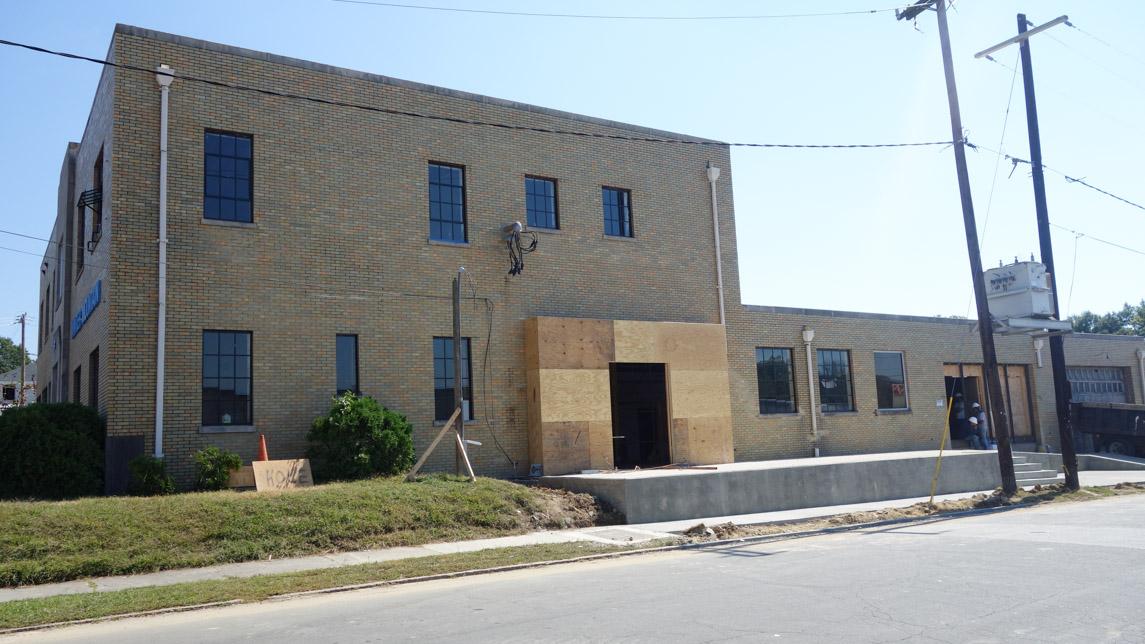 10.1.13 - Under construction - The Pit Barbecue from the Empire Eats group in Raleigh. Photo by Andrius Benokraitis

A "friendly BBQ rivaly" to begin as Diamond View III in American Tobacco is also to gain a new barbecue restaurant soon. The Pit is slated to become one of the largest restaurants in Durham, which will feature an actual BBQ pit for cooking, a rooftop outdoor dining deck, private party rooms, and valet parking. On the day this photo was taken, the giant power transformer was being removed as well as of of the utility poles. The previous bottling plant required a substantial amount of power, which was no longer required with the new restaurant.

Approaching a decade of operations in the Rigsbee-facing portion of this building, Fullsteam Brewery's self-described "Chief Executive Optimist," Sean Wilson, provided the following reflections on their run at this location:

"When we first told people we were opening a brewery and community space in the old warehouse district, we'd receive mostly blank stares. No one really knew where the area was. In spite of its collection of historic buildings and its important role as a tobacco, manufacturing, and service district, the Warehouse District was a mix of empty buildings and auto repair shops (with the important exception of Manbites Dog Theatre, which perhaps foreshadowed the entertainment and nightlife that was to emerge over the following decade).

For a number of years, people kept on trying to give it a name (myself included). But the one that's stuck is Rigsbee/Geer. I like the Esse Quam Videri nature of that simple moniker: 'to be, rather than to seem.'

We're pleased with the evolution of the area, though we know the next ten years is going to play out quite differently than our first ten. And at times we wonder if we're pushing the bones of the building too far: our first full year of brewing we hit 800 barrels; last year we brewed nearly 8,000.

I look at the humble Butler A-Frame and see evidence of its history: dings on the brick where forklift tines scraped the wall from distributing soda and water; evidence of an old auto repair logo on the front of the building's facade. I can't help but wonder what evidence of Fullsteam will be present in the building's bones, and when people might remark on this chapter in its history.

I hope it's a long chapter. We're still hard at work, pen in one hand, paddle in the other."

So this is the Geer Street building, right?

Winter Mountain is gone from there--there's a sign on the west side of the building that says they've merged with another company (Diamond Springs?).

I believe there's a business trying to get into the space, so hopefully they'll be gathering steam soon.

Thanks for the update - I missed the sign. It's a cool building, so I hope some small business can get in there. With some cool period-appropriate windows, this place could shine.

A picture up on the Full Steam Brewery web site appears to show a view our an upstairs window of this building. I'm hoping that this will be their new location since it's only a mile from my house. I can walk over and stumble back home an hour or two later!

I agree GK. This is another startling example of how much windows effect the appearance of a place....in this case, its a negative and not a positive.

Fullsteam Brewery will indeed be in this space! Our location is at the end of the complex on 726 Rigsbee (south of the location shot referred to by anon).

We're excited to continue the theme of producing beverages at this historic site. From "un-cola" to "un-beer?"