Erwin Road
Durham
NC
Cross Street
South LaSalle Street
Year built
1960
Year(s) modified
2001
Architects/Designers
Lyles, Bisset, Carlisle, and Wolff
Construction type
Frame
Masonry
Neighborhood
Western Durham
Use
Apartments
Building Type
Residential
Can you help?
You don't need to know everything, but do you know the builder?
Log in or register and you can edit this. 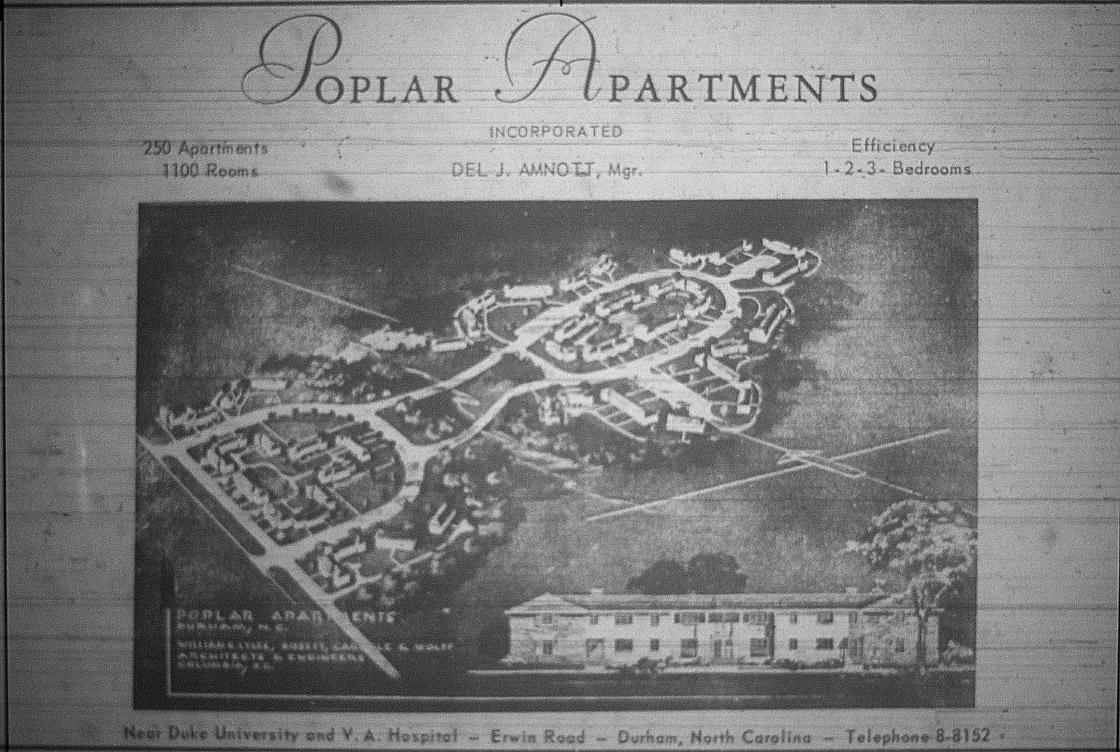 The southern half of these apartments were demolished ~2001 to make way for the Erwin Terrace development. The northern half appears to have been renovated and rebranded as "Poplar Manor."

We paid $65 dollars a month rent for two bedrooms.  At that time, we understood the apartments were built during the war in the 1940s and were never meant to be permanent dwelling.  That may or may not be true.

99% of the tenants were Duke Internship-Residency families; many newborns, toddlers and pre-school children.  Our husbands had brutal schedules.  It helped that the wives formed close, supportive friendships.

Duke Hospital was still the original gray stone building with an ellipse in front of the main entrance.  The Gypsy Queen with her entourage came for her annual check-ups, always managing to by-pass the financial office on her way out.  The snack shop was called "The Dope Shop".  Inter-office mail and charts were sent by pneumatic tube.  The Duke Blue Devil mascot wore a Sears Roebuck union suit dyed with blue Rit Dye and carried a papier mâché trident attached to what looked like broom handle...definitely not our suave Devil of today!

Back to the original subject, though...have I mis-interpreted the information mentioned above about the year Poplar Apartments was built?