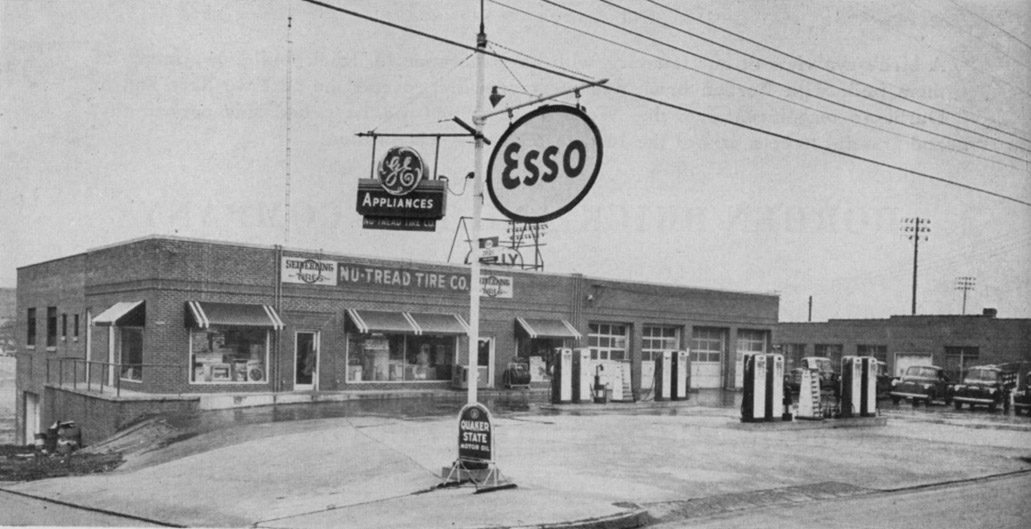 In 1951, the Nu-Tread tire company was described as "rendering a wide range of services to the motoring public," which included a "nationally advertised line of tires, tubes, batteries, and auto accessories" as well as "the General Electric line of electrical appliances such as refrigerators, ranges, radios, etc., including televisions." They were noted to have a 'recapping plant' that was "one of the most modern in this section, and manned by a crew of experienced workers."

The Nu-Tread tire company was started around 1930 in one bay of a commercial structure in the 300 block of McMannen St. (now S. Mangum St.)

S. Coley Ray came to Durham in 1933 after working on his father's farm for several years. He worked for a "local tobacco company" until 1937, when he started a service station at the corner of Pine (now Roxboro) and West Pettigrew. This service station was located on the large open corner next to the Venable Warehouse.

In 1943, he purchased the Nu-Tread Tire Company from the previous owner and in 1947 moved the company to a newly constructed building on Foster St. 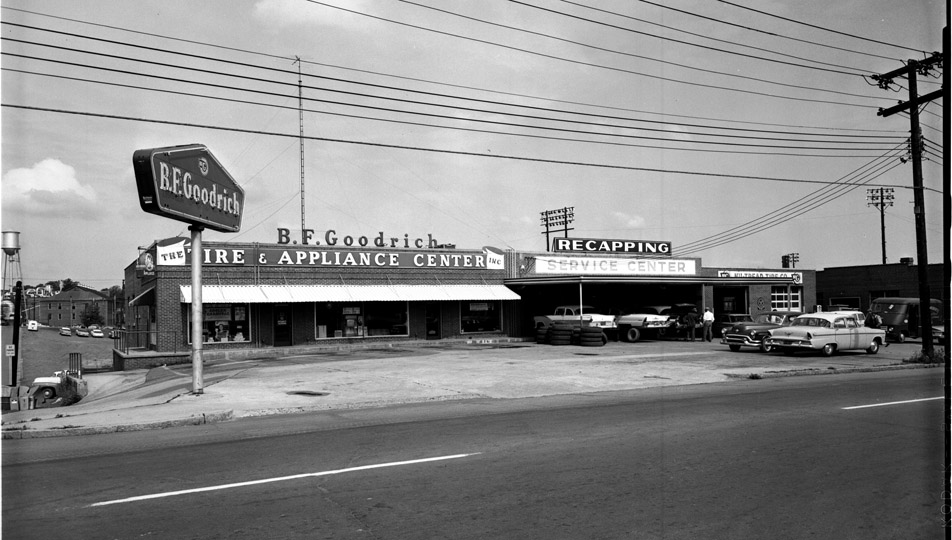 The Ray family ran Nu-Tread Tire until quite recently - I'm not sure exactly when it shut down - 2006?

The building was purchased by Measurement, Inc. and, in March of 2008, they essentially 'swapped' structures with Accent Hardwood Flooring (so that they could control the entire block between Morris, Roney, Corporation, and Hunt - including one of the last remnants of the one-time beautiful houses on Morris.) The former Nu-Tread building became the new headquarters for Accent.

Nu-Tread Tire Company constructed this large brick nine-bay-wide building at the northwest intersection of Foster and W. Corporation streets [in 1947]. The north section of the east-facing building, 605 Foster Street, was listed as the Taste-Rite Sandwich Company in the 1950-1951 directory, but this business lasted only a few years. By 1957, 601 Foster Street contained The Tire and Appliance Center, which sold GE appliances, and 605 Foster Street contained the Nu- Tread Tire Company, although the businesses were run by the same ownership. Both businesses continued to operate at least until 1963.

The site abuts the Durham Bulls baseball park to the rear (west), and the sloping site allows a full story below the street level. The standard commercial construction features one-to-five common bond red brick walls with large metal casement windows with concrete sills and concrete coping. The south end of the building contained a salesroom with a door flanked by large display windows, a soldier course above the openings, and a wraparound concrete deck with a metal railing. The four northern bays contain wood paneled and glazed garage doors. These retain painted signs for "recapping," brake service," "wheel balancing," and "wheel alignment." Two rows of gas pumps were located in front. The side and rear elevations contain large metal windows. A 1953 documentary photo in the Open Durham blog shows the original appearance of the building. Sometime after 1953 two additional service bays of similar design were added at the north end.

About 2009, Barbara Genia Smith purchased the building and renovated it to house Accent Hardwoods, a wood flooring company that uses one of the office spaces as its showroom and the remaining spaces as a warehouse. The southernmost office space is rented to another business. Ms. Smith replaced the display windows of the office spaces with new metal and glass windows and doors. The flat-roof canopy that shelters the four service bays appears to date from the 1960s, but the metal posts are recent replacements. The large building, of standard 1940s commercial and warehouse design, retains most of its original architectural character. Although the office windows are replacements, the remainder of the building has high integrity and is a contributing building in the district.

Anybody know the origin of

Anybody know the origin of the stuffed gorilla that Nu-Tread used to have inside? It had a sign around its neck that said "Service Department" or "Complaint Department" or something. I always meant to get a picture of it and never did, dang.

Anyone know what happened to

Anyone know what happened to Rufus Mitchell?

We bought many tires from Nu

We bought many tires from Nu Tread over the years. I bought recaps too!

They used to be able to "spin balance" the tires, which was at the time more accurate than the machine balancing. Now, computer balancing is superior to spin balancing.

A man named "Cecil" helped us.

My dad (Mike Ray - one of 3 sons of S.C. Ray) went to a tire convention in Las Vegas in the 80's and couldn't resist bringing that gorilla back. Not sure where the gorilla has ended up - someone bought him when Nu-Tread closed in 2006.

Cecil Vaughan is my Dad. He

Cecil Vaughan is my Dad. He's doing well, playing golf, working in his yard in Hillsborough, NC. I meet a lot of people that knew him when he worked for Brunson's at Main / Duke St and for Nu Tread. Many people told me he helped them through the years. Thanks for the recognition of my Dad.