Originally part of a chain of drive ins and diners throughout the Carolinas, the Durham location of Honey's Restaurant opened it's doors in 1961 and was popular with the after church and middle of the night crowds. This Durham mainstay, and the last surviving restaurant in the chain, will close it's doors on Sunday August 18, 2013 for good. 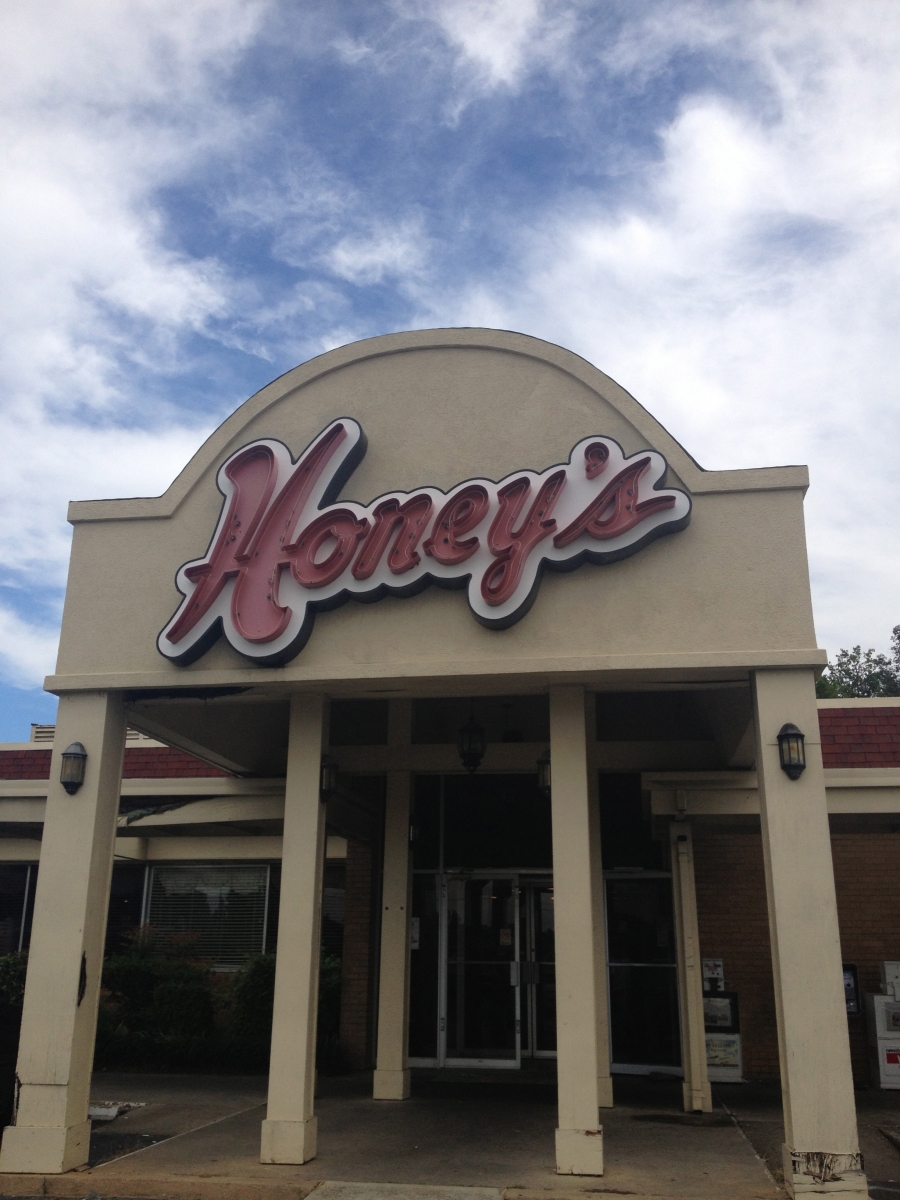 Honey's Resaturant opened it's doors on Guess Road in 1961.  Originally it was one of the nicer diners in the area as you can see from photos below. It was a Durham institution, packed to the brim with families on Sundays after church but also home to drunken late night conversations over Country Ham with Red Eye Gravy.

Honey's was named for its owner, Yates Louis (YL) Honey, a Charlotte entreprenuer who owned various businesses throughout the Carolinas. Honey attended RJ Reynolds HS in Winston Salem, graduating in 1930 and opening his first ice cream stand that same year. Every few years he would open up a new, different business, from ice cream stands to hotels, and everything in between.

Honey's Restaurant was a chain of diners which had locations in the Charlotte area, Greensboro, Chapel Hill near Glen Lenox, and this location in Durham in addition to others in SC. The original restaurant in the chain was called the Minute Grill, and it changed it's name to Honey's in the 1950s. According to an advertisement for a Charlotte location, Honey's was endorsed by none other than.....Duncan Hines. The original celebrity chef. The original Yelper.

The Durham location was one of the last to open of the chain, and was the last remaining. Here is a photo, hanging in the entry of the Durham Honey's, that shows what it looked like when it opened in 1961. 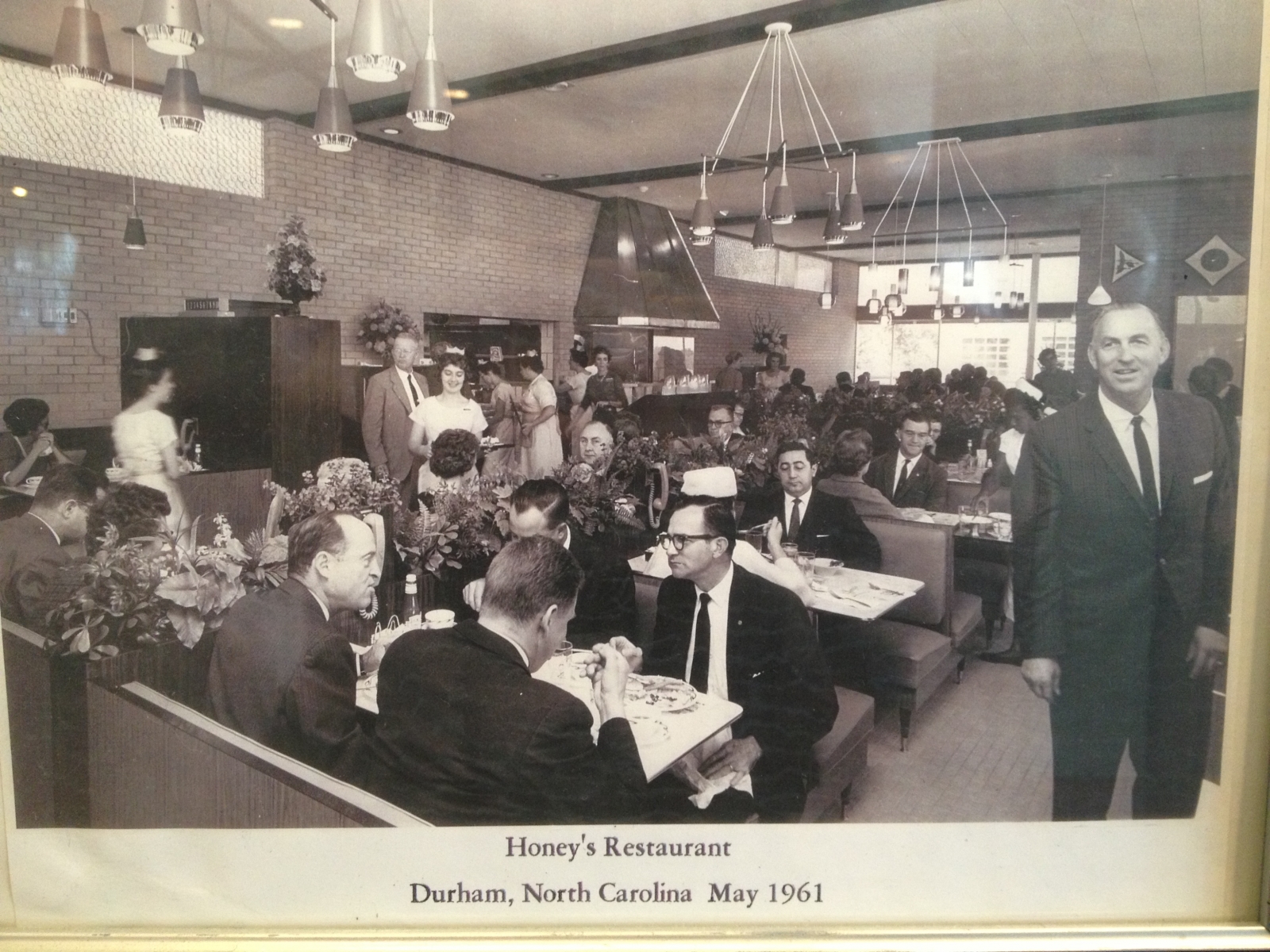 A menu from a different Honey's location from 1962 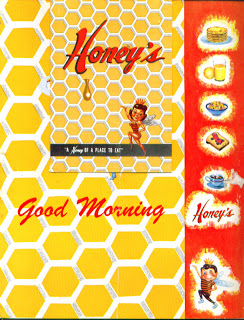 Here is what the restaurant looks like today. There are always regulars lining the counter. This is the half of the restaurant that still had a smoking section up until the state ban. 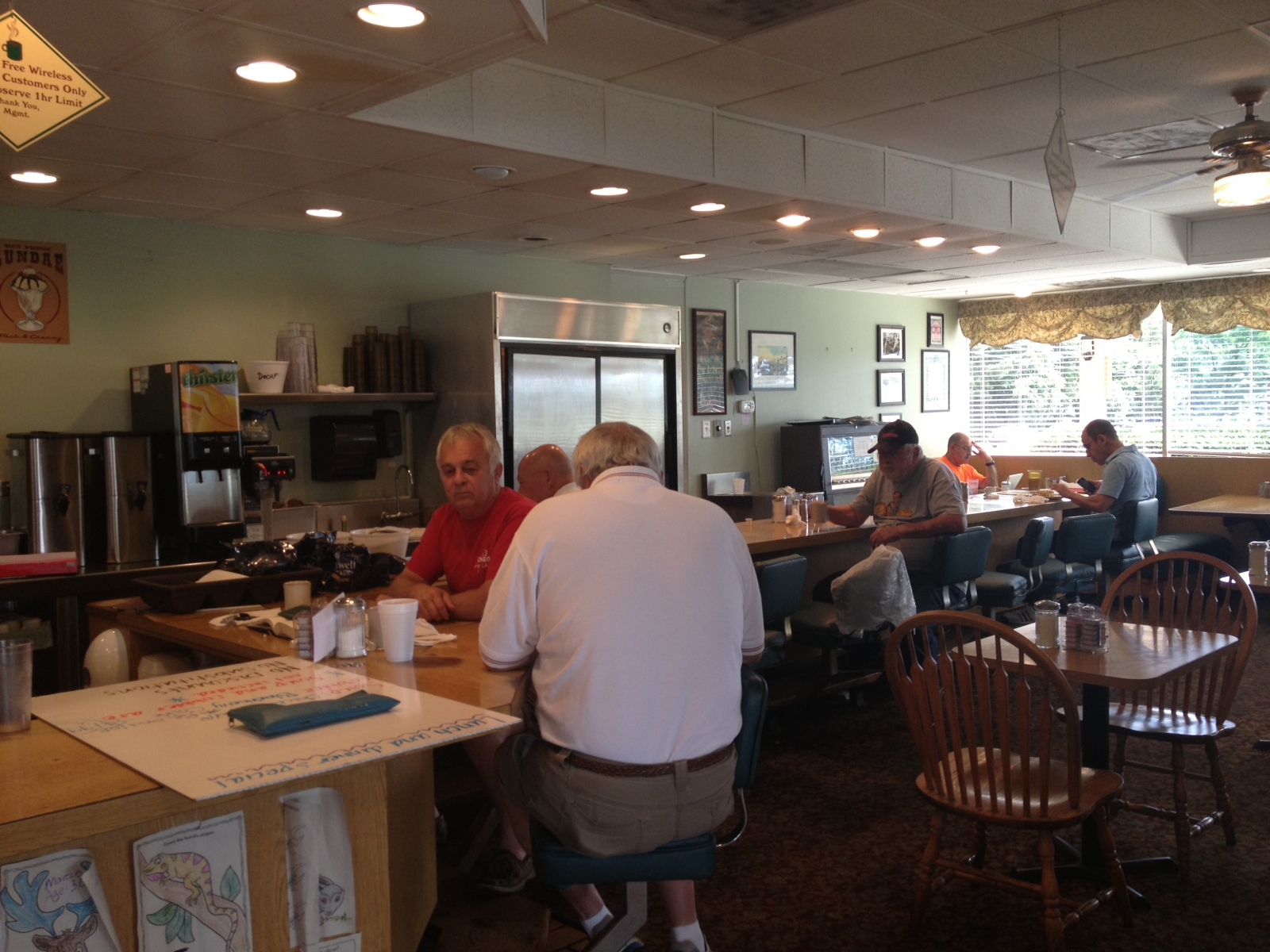 The restaurant went through a slight renovation about 5 years back but has still seen better days. Quite a few of the booth seat cushions slid right off of the platforms or were covered in tape. 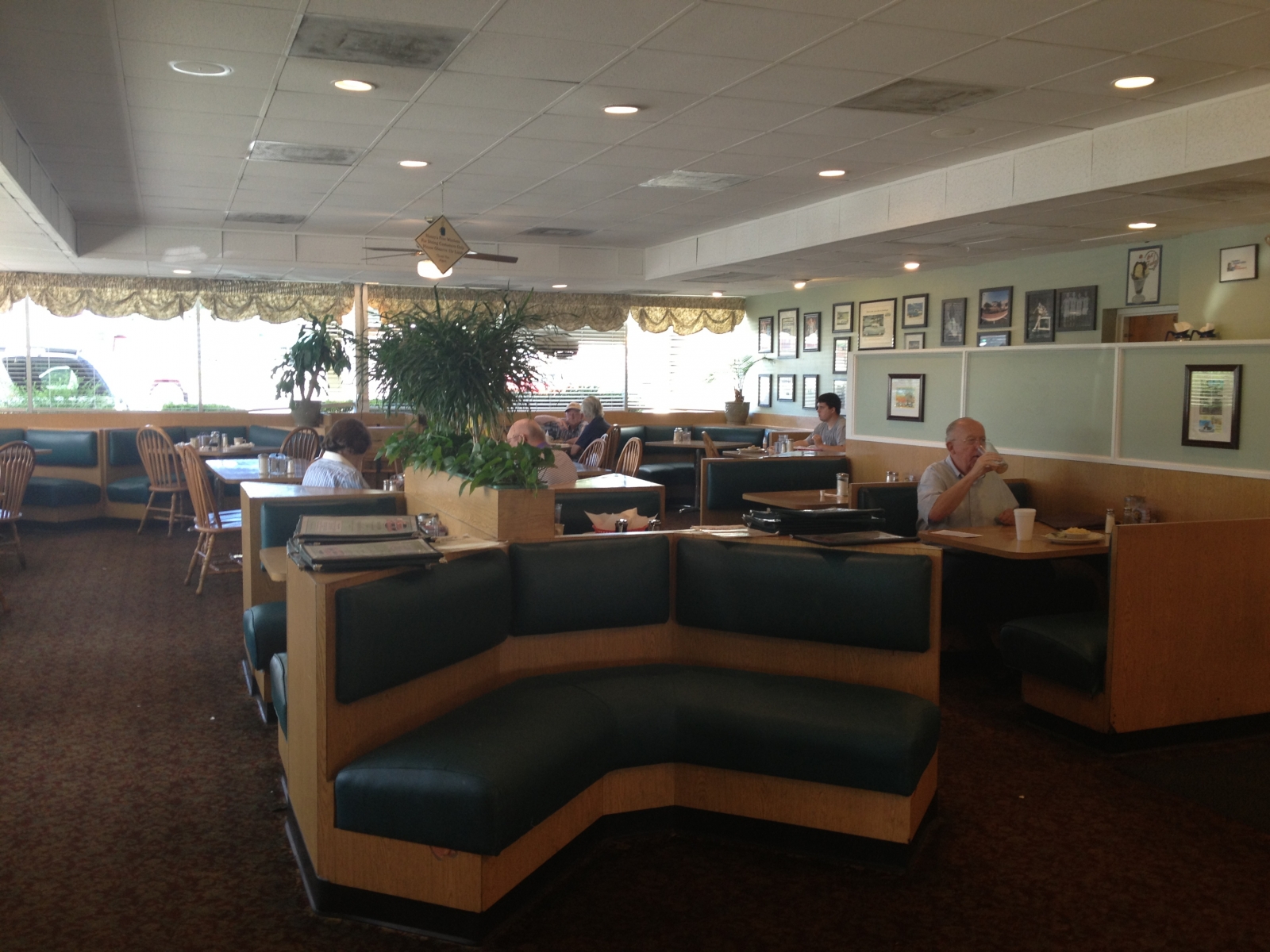 My FAVORITE thing about Honey's was the fantastic music always playing, but I also love the counter area, as it reminds me of what a diner counter should be. Regulars lining the stools, coloring book drawings, dry erase menu boards, stacks of hand written tickets, March of Dimes donation boxes, toothpicks, mints. 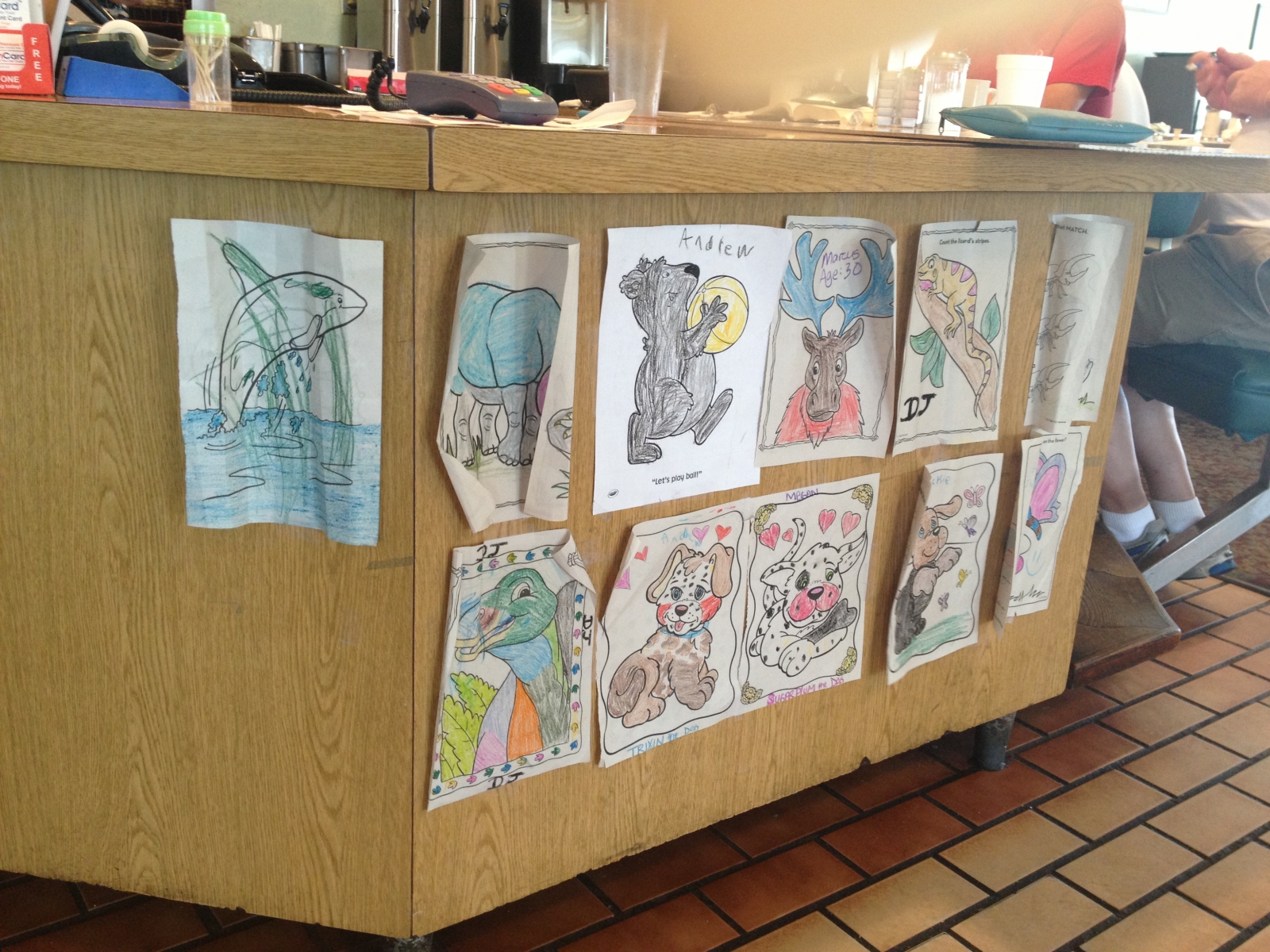 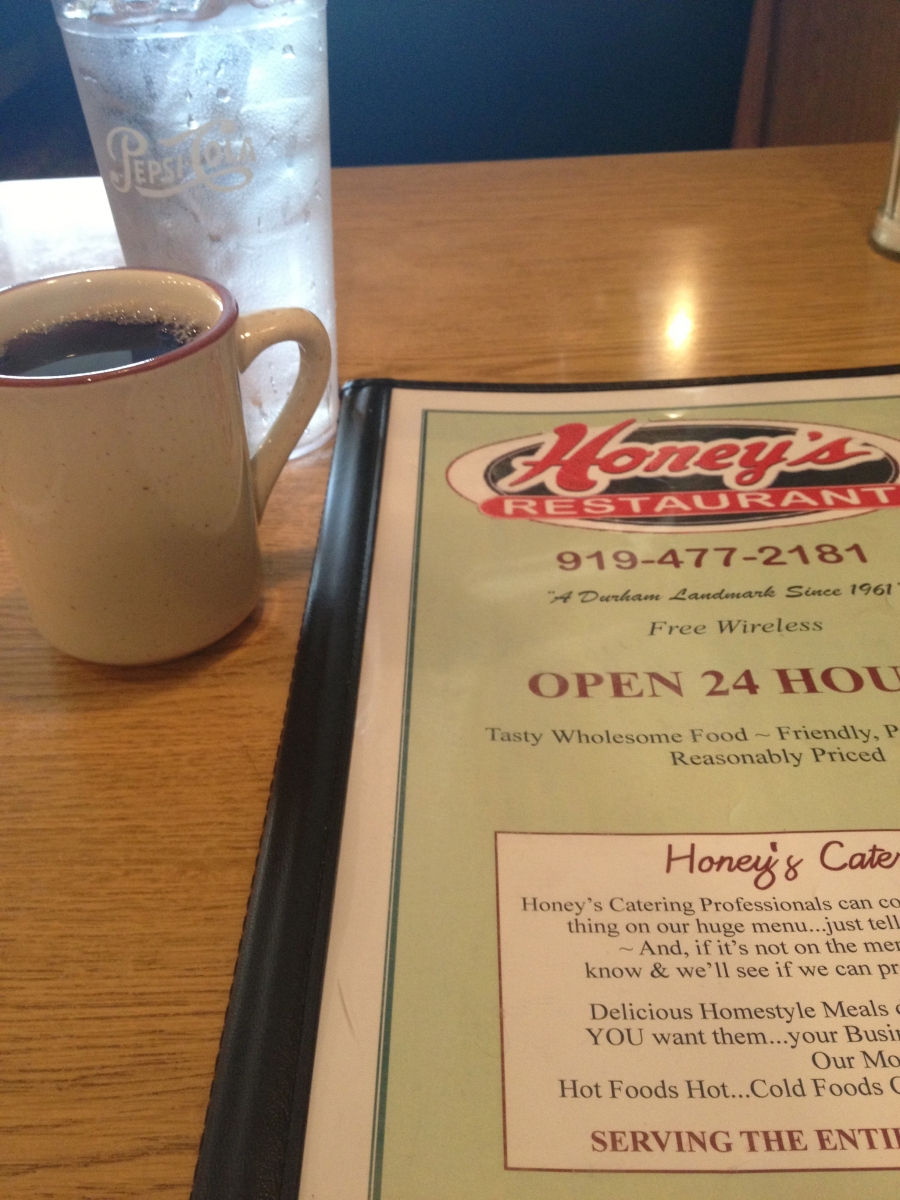 The bee theme was carried on throughout the restaurant until the recent renovation. In the 1990s and 2000s they sold some sort of bee supplement. I remember there always being advertisements all over the place, on the tables, on the windows, hanging from the ceiling, again at the register, just in case you missed it. This rug is the only bee to be found anymore. 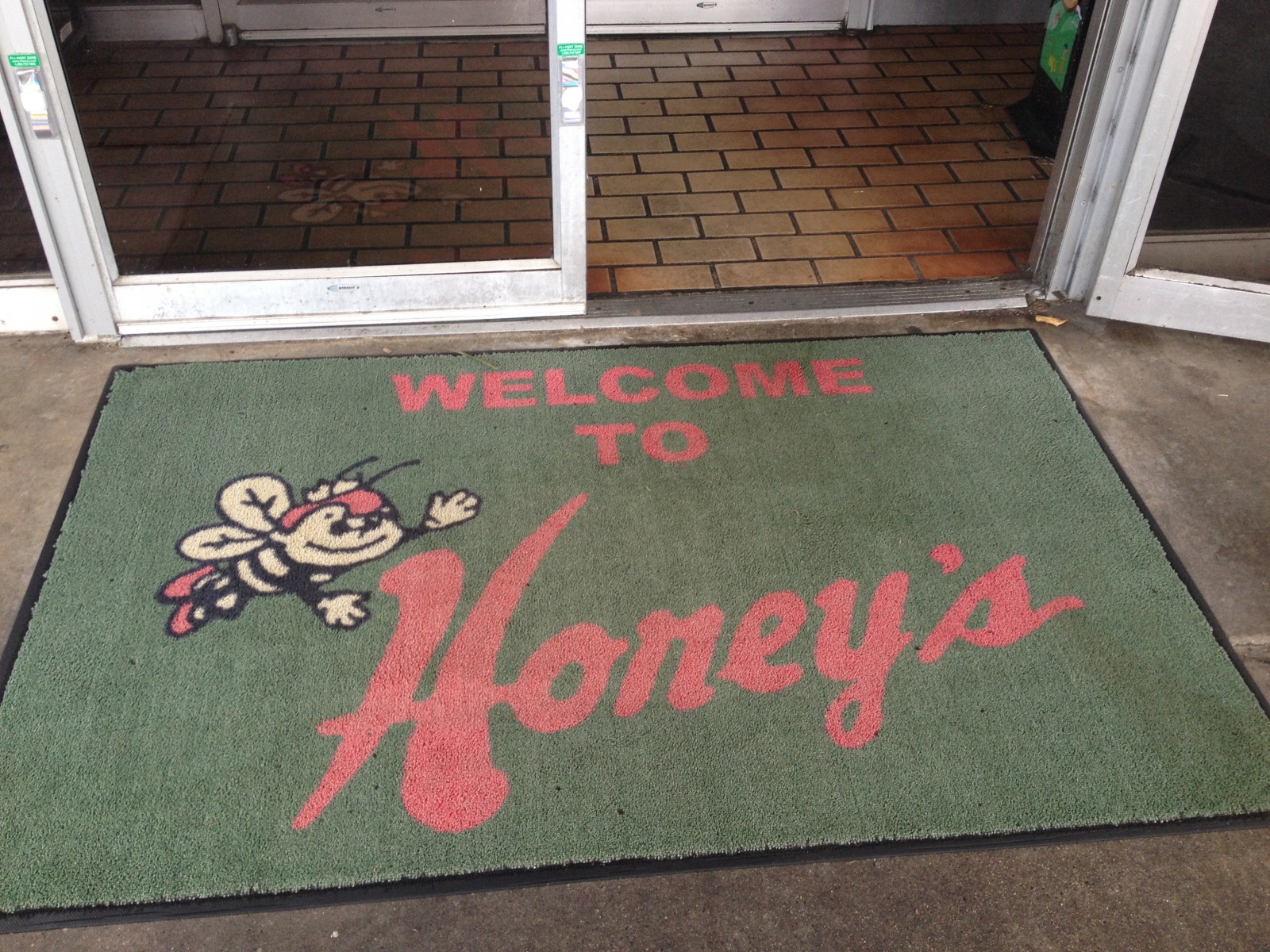 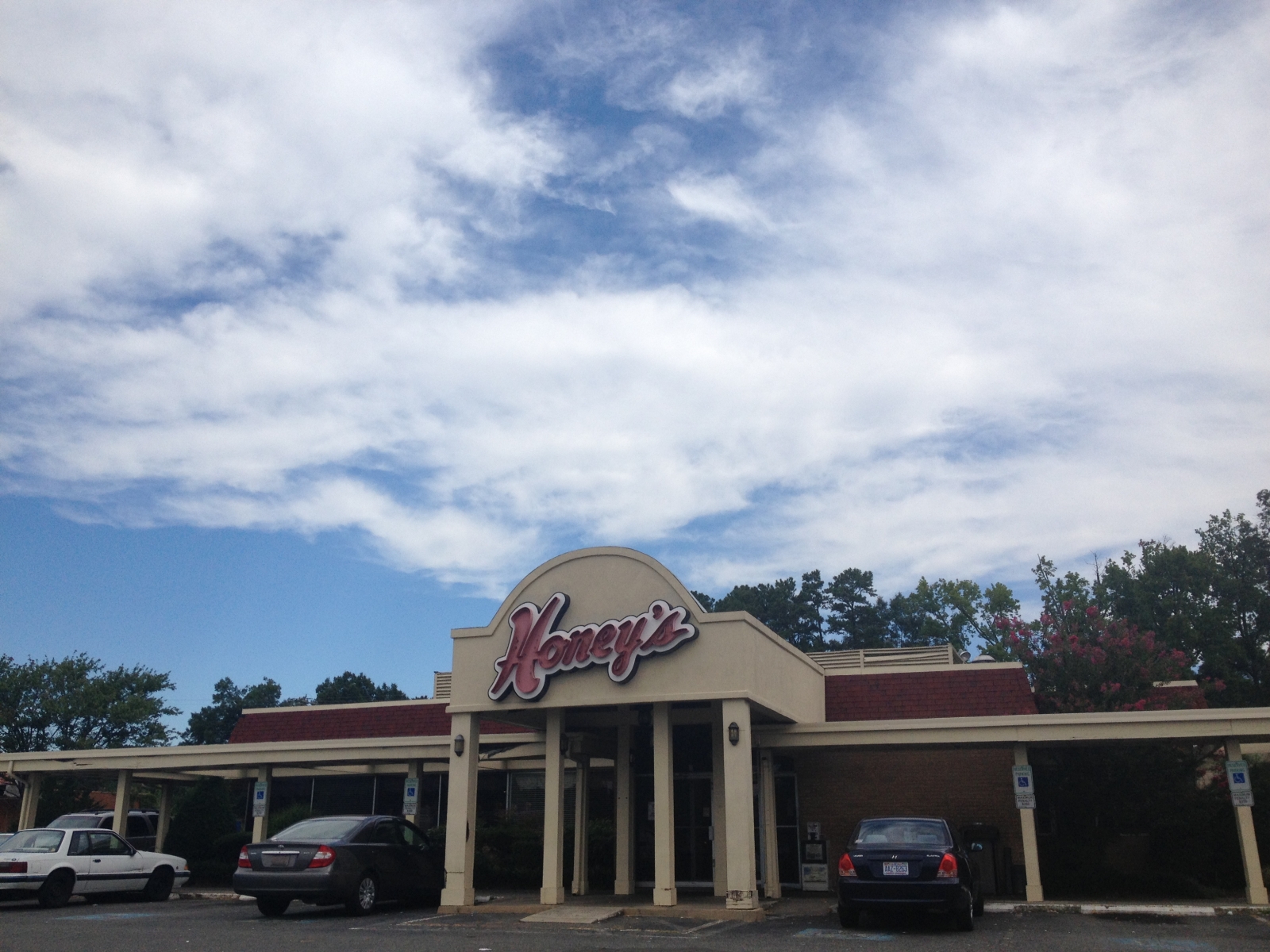 This last remaining Honey's will close it's doors for good Sunday, August 18, 2013.

Holmes Oil Company owns the land, so I imagine it will become a Cruizers gas staion, but who knows? In recent articles the owner of Honey's, former manager turned owner Buck Dickerson, has said that they were looking into other locations in North Durham. It will be interesting to see what happens with this. Make sure you head on over to Honey's one last time for some famous hash brown casserole before it closes this location.

With the heavy equipment out

With the heavy equipment out front it seems the destruction of this building is imminent.

The restaurant has not been

The restaurant has not been competely torn down yet as of this morning, Tuesday November 5th, though the bulldozer is right next to the building.
I had not heard about Honey's closing beforehand, then drove by there one evening on I-85 in late August to see that the lights were OFF!
I was shocked!! I first set foot in Durham in the fall of 1992 to attend Duke. During my years at Duke, we spent so many VERY LATE evenings hanging out there. We usually went there around 2 or 3 a.m., but I recall one time going there around 5 a.m, and it was the only time I remember only a few customers being in there. I always ordered a waffle or french toast with a side order of hash browns, and a cup of coffee. I loved this place!! Somehow I thought it would always be there, I never imagined it would close. It was sort of like your own home- you could always count on it being there and being open whenever you went there. But Durham is a far different city than it was 21 years ago. We have so many more good quality restaurants now. We have so many more late night hangouts now. Downtown is a destination now, not someplace to avoid like the plague, even at night. And they built an IHOP restaurant right next door. I am sure all of these things, as well as the increased value of real estate, influenced Honey's closing. I truly feel Durham as lost something of value. It was part of the culture and fabric of Durham! Whenever my college friends would come back through town, we would go there! I am very saddened by the loss of Honey's, and I truly hope when it re-opens, that the atmosphere and the food will be just the way it always was.

I forgot to add, I used to

I forgot to add, I used to love the total 60s/70s atmosphere! Before the renovation, the seats were vinyl or soft plastic and were that mustard yellow-brown color! Everything was in that earth-tone theme of the 70s! It was awesome! Later they switched to having more green colors for the seats and wallpaper.

That's my old Mustang out

That's my old Mustang out front...I am going to miss Honey's

The left and front half of

The left and front half of the restaurant is torn down as of 8:45 this morning, back wall and right hand side still standing.

As of 9:00 pm on Wed Nov 6th, Honey's was completely torn down. Just a pile of rubble. The only recognizable piece of the structure left was the archway that went over the entrance and once had the "Honey's" sign mounted on it (see top photo). Anyone know what is going to be built in it's place?

I went by this morning the

I went by this morning the building is completly gone...

There have been many local

There have been many local people that have supported honeys all these years! In the last days of being opened everyone was told the owner was looking for another location. So far it appears Honeys will not reopen at all.If the owner had no plans of "ever reopening," he should have stated this instead.

And thru the windows in the

And thru the windows in the 1961 interior photo, I can see the truck service bays behind Servicetown Truck Stop-- where I worked from December '72 thru Sept. "74. My first real job. It was owned by Kenan Oil Co. There were 2 sister stores, one in Greenville, S.C., and one in Fredricksburg, Va. I saw Mr. Frank Kenan once while I was there, he was coming back from a duck hunting trip-- he and his friend were unloading their shotguns and ducks from the trunk of a car. He spotted me and asked if I would like to have one. I politely declined. I would not have known how to clean it and cook it anyway, lol.

It would be awesome if

It would be awesome if someone has and would post a photo of Servicetown Truck Stop Durham. Searched the web with no luck-- Thank you in advance whomever does it !!!!