3832 Somerset is a brick Rambler Ranch, five bays wide and double-pile, with a central recessed entrance porch and side-gable-on-hip roof.  A wide wing creates a carport and screened porch on the right side under an extension of the main roof, with a rear deck reaching out to the back yard behind the porch.

This area of Hope Valley, including Somerset, Churchill, and Westover, were part of a western expansion of the original neighborhood.  While the land was platted out and available in the late 1940s, there was not a lot of interest in the lots set along short dirt roads.  In the mid-1950s, however, the developers brought utilities down the new streets, built a few houses speculatively, and began to create some buzz - it was then that the Lewis family purchased their lot.  Herace W. Lewis, originally from Virginia, had come to Durham after attending Roanoke College in 1937 and began working with American Tobacco Company.  There, he was first in the accounting department, later a purchasing agent, and eventually manager of the Durham Leaf department; Lewis worked for the company for 45 years.  Mrs. Lewis was a homemaker (and a very good one, according to her husband).  Before moving to Hope Valley the family lived in the Watts Hospital neighborhood.

In 1957, Mr. Lewis looked for the lot on the highest ground that had utilities available, and imagined a house that would sit well on the land.  Mr. Lewis designed the floor plan himself, sketching up what would be best for his family, and an engineer friend, Cleveland Kerns, drew it up for him.  Onney Johnson, a second-generation builder who had a hand in many houses around Hope Valley, was the contractor.  Within three or four years of the house’s construction, most of the surrounding lots had been built up as well; a few years later, Somerset and the other streets were paved and extended into their current formation.  The Lewis family lived at 3832 Somerset for a full 50 years, only leaving to enter a retirement home near one of their daughters in 2006.  The house stood empty for a year, and was purchased in July of 2007 by the current owners - partners seasoned in redoing mid-century houses and bringing out their best features.

3832 Somerset is a brick Rambler Ranch, five bays wide and double-pile, with a central recessed entrance porch and side-gable-on-hip roof.  A wide wing creates a carport and screened porch on the right side under an extension of the main roof, with a rear deck reaching out to the back yard behind the porch.  The brick exterior, shutters and simple facade look spare and traditional - but the inside is full of surprises.  One clue from the exterior is the wavy glass in the three-light front door and side-light, a taste of mid-century modern in an otherwise buttoned-up design.

The Lewis family left the current owners with the original floor plans of the house, which gave a launching point to the redesign.  Immediately after their purchase, they embarked on a significant remodel, sensitively playing up the 1950s features while updating many elements.  The original large-paned jalousie windows (called “Miami” windows by the current owner) were a step better than the standard jalousie window counterparts in that they had some weather stripping between the pieces of glass, but still were far less energy efficient and commodious than the average historic window.  New windows were custom-made to keep the horizontal mullion pattern and original large sizes, but reconfigured into casements.  Similarly, the new French doors throughout were made based on the pair that lead from the dining room to the screened porch: not in the best condition, they were still distinctive to the era and worth replicating.  Now, French doors in the same style have been added to the living room and master bedroom.  The strong horizontal lines from the windows and doors continue out onto the expanded back porch, which has custom screened doors and a railing at the same height as the doors’ muntins.

The floor plan still follows Mr. Lewis’s general format, with a foyer opening onto a den, the living room, and the private wing of the house.  The den and kitchen, initially small, knotty-pine-paneled rooms with divided by closets and hallways, have been opened into a large, L-shaped space that makes the most of a narrow area and allows views through the house. (The Lewis’ say this was something they had wanted to do but never got around to it!)    The ten-foot island serves to connect all the spaces and makes it very welcoming; the walnut cupboards and concrete countertops blend modern style with a nod to 1957.  Similarly, cork flooring through the kitchen is new but identical to other houses in the neighborhood where it was installed originally.  Behind the kitchen, the dining room leads both to the screened porch and to the living room; a large, gridded brick fireplace divides the two spaces.  Throughout, there is striking, period-appropriate mid-century modern furniture, including Saarinen, Knoll, and custom-designed pieces, as well as original artwork.

The three bedroom, two bath private wing is still essentially original, as the remodel left the built-ins in one bedroom and the hallway intact and freshened everything with fresh paint and hardwood floors.  The bathrooms have each been remodeled with a light hand, sticking with the original arrangement and materials where possible (like the hall bath’s random tile floor) and updating where appropriate (the master bath’s new double vanity and fully tiled backsplash).   The basement, once a partially finished rec room, is now complete, with wet bar and all.  The knotty pine from the den and kitchen were reinstalled in the basement to polish it in a period-appropriate way.

The current owners have remodeled houses in the past and may well again.  In the meantime, they love the neighborhood and are enjoying the house with their three dogs, one of which is a whippet named Lewis, in honor of Herace and Frances.  Like the Harris house six homes away, the Lewis House has been given a new life by owners that respect its past and recognize its unique potential 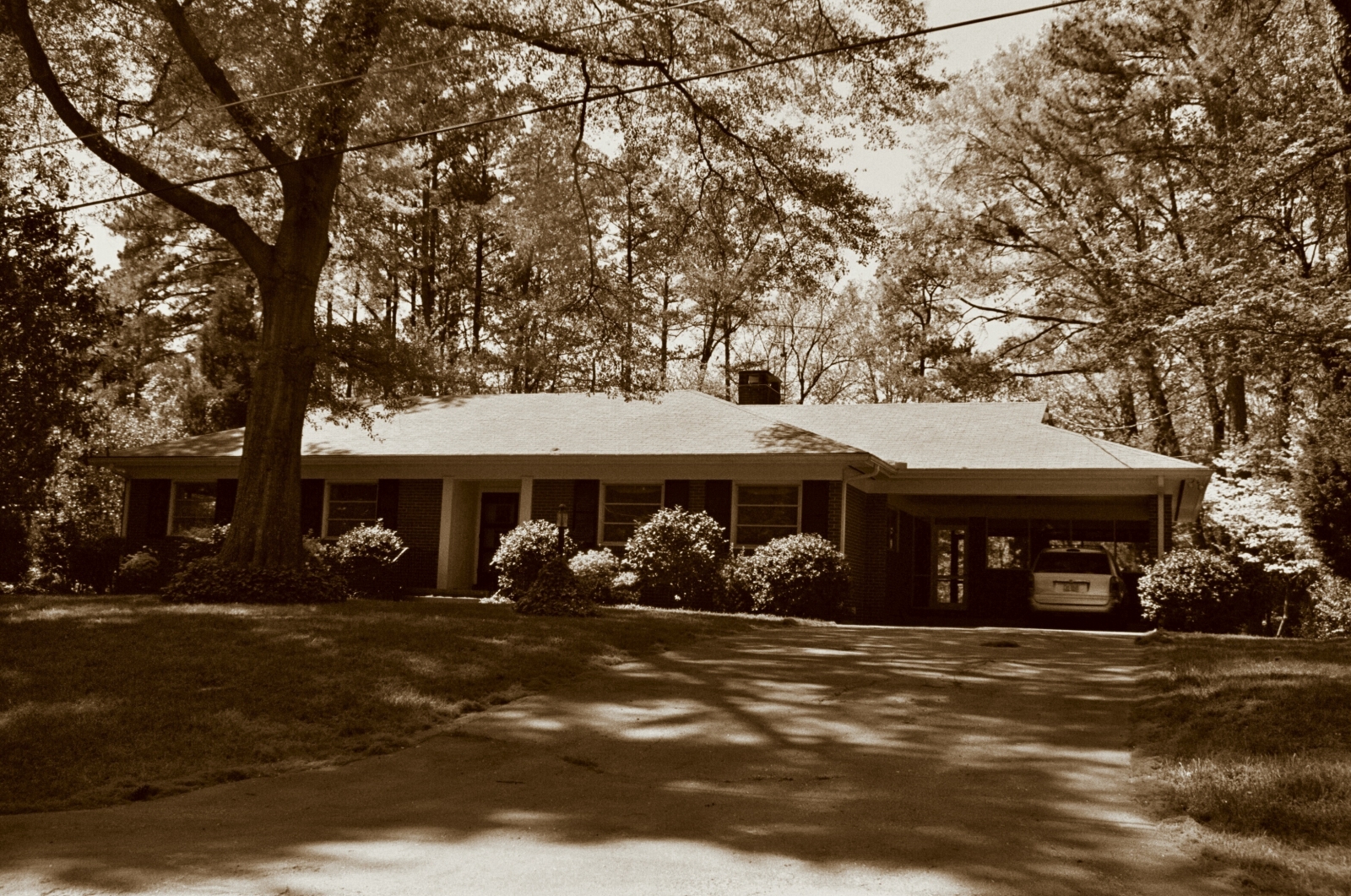