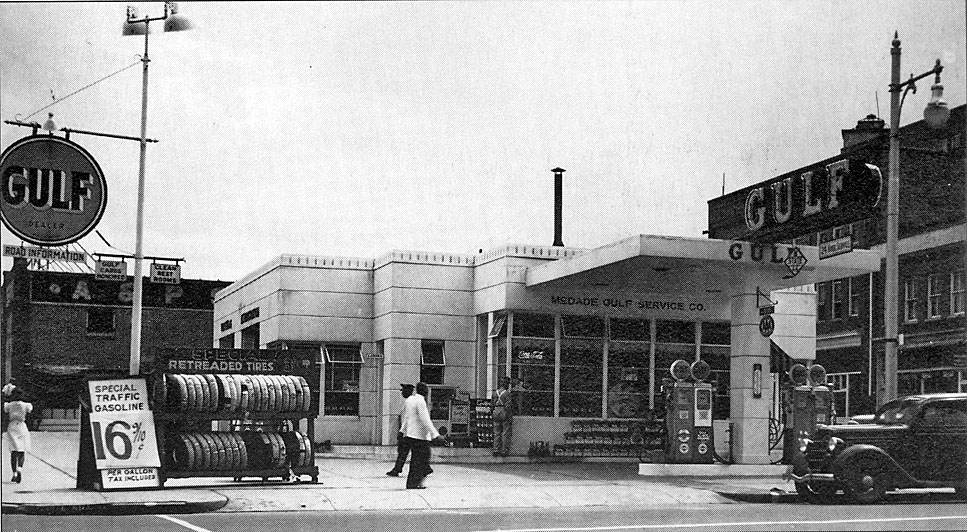 Like the Harris Service Station/Hotel Gas and Storage across the street, the tiny 'block' between Orange St. and N. Rigsbee skipped the 1910s-1920s mercantile commercialization and went straight to the car culture. Prior to the late 1920s/early 1930s, this spot was a boarding house. 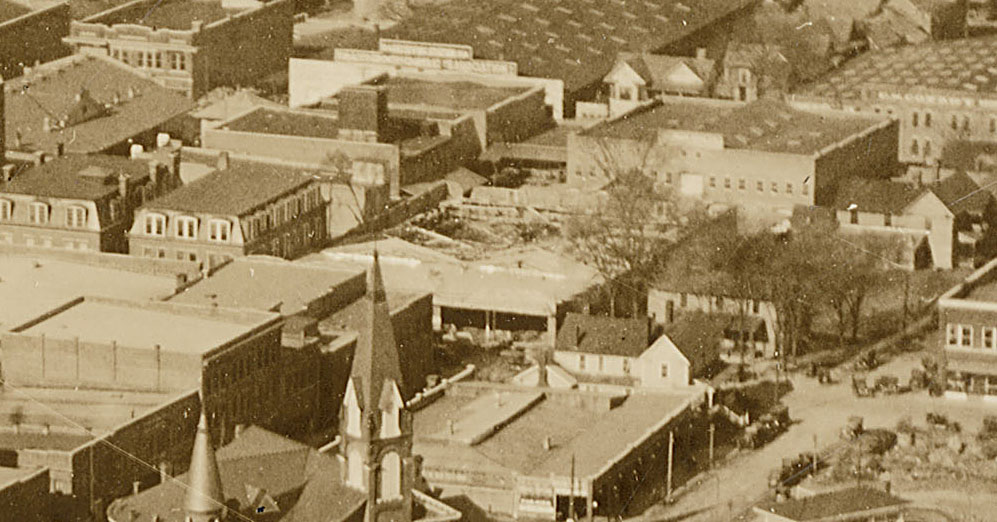 Looking north-northwest, 1924. The First Baptist Church is in the foreground, with the eastern-facing facades on Orange St. immediately behind it. Rigsbee runs parallel to Orange, to the right. 111 N. Rigsbee faces the Willie Mangum house and the Harris Garage.

Soon after that, it was torn down, and replaced with a Gulf Service Station.

Looking south from East Chapel Hill St. (the east-facing facades of Orange St. are visible on the right)
(From "Images of America" by Stephen Massengill.) 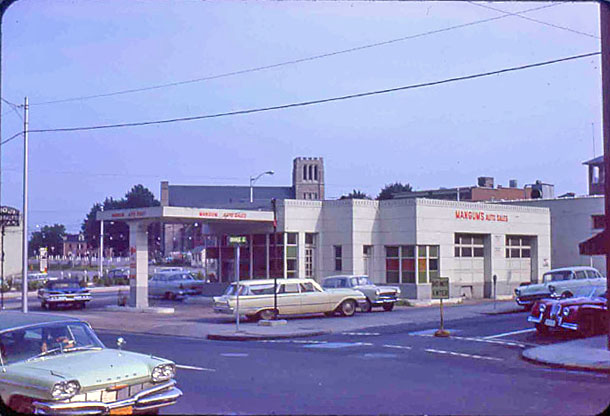 And looking west from the intersection of N. Mangum and E. Chapel Hill St. The triangle of land east of Rigsbee (bounded by Rigsbee, East Chapel Hill, and Mangum) was razed a few years earlier. 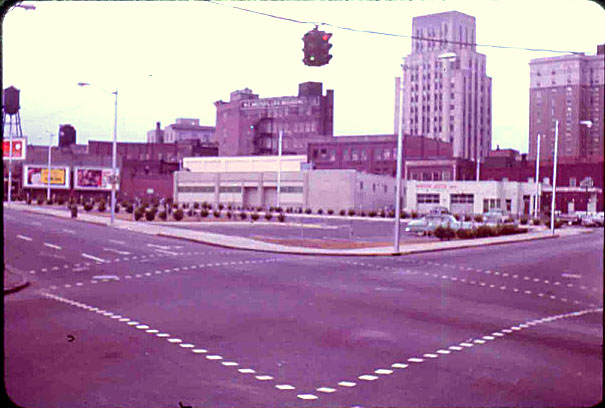 Not long after, this service station was razed. Rigsbee was closed south of East Chapel Hill St., and a glorious parking structure was built, circa 1970. 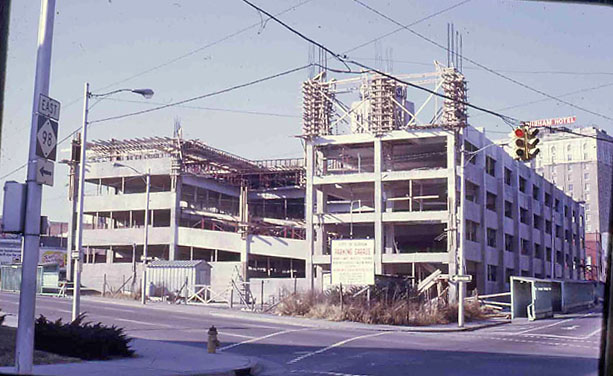 Below, a view of the completed parking structure in 1978, looking southeast. 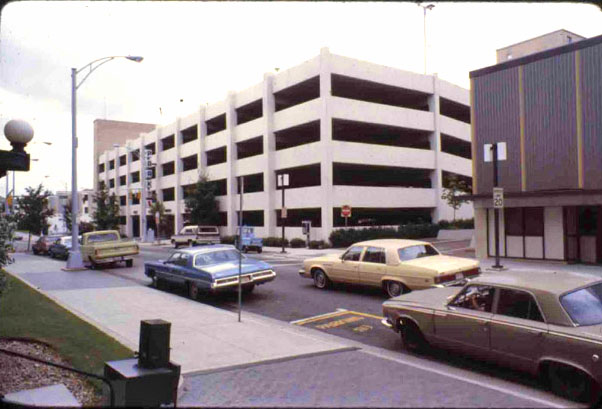 And today, a slightly more multicolored version, looking south where Rigsbee once continued one more block to obliquely intersect with N. Mangum. 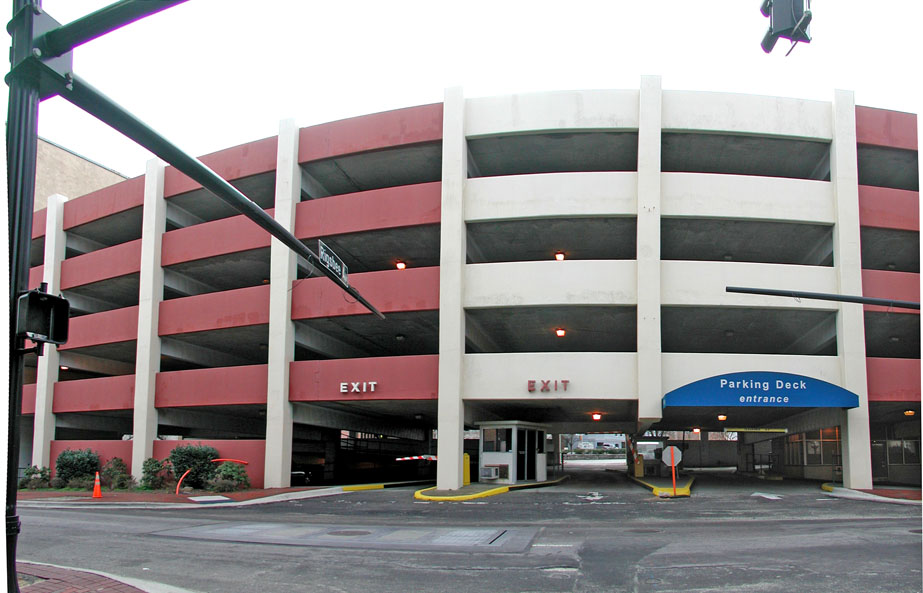 I hope someday this parking structure will go away. If you really wanted to create some effective open space downtown, this area has the elements to make it effective - with the fairly intact facades along Orange St. and East Chapel Hill St., City Hall, and the density of structures around Parrish and Mangum & Main and Mangum - it would work well. (Particularly with improvements to the Loop and a two-way Mangum St.)

If we really need this parking, build structured parking behind the post office and behind the 400 block of East Chapel Hill, with liner buildngs on Rigsbee and Morgan to create a streetscape.

While I feel your pain on the

While I feel your pain on the ugliness of that deck, parking decks are expensive enough and such a better alternative to surface parking that I'd hate to see us start tearing them down before there were good plans to replace them.

I guess it's the equivalent of my stance on nuclear power. Sure, it's noxious, but if we're going to get rid of a much worse blight, we can't throw it out just yet.

I don't disagree that this shouldn't be a top priority, but I think it should be part of a downtown plan. I'm all for making decisions in an interconnected way, such that a decision made on, say, Morgan St. doesn't obviate the ability to put liner buildings on Morgan, which could still be built with enough space to allow parking decks behind them, etc.

This deck makes me think a little bit of
the parking deck in Savannah that stood on Ellis Square, the site of their old city market. In that case, the city of Savannah had given the private parking company a 50 year lease on the space (something like 1953-2003.) It was obnoxious to have this deck (which resembled our CHSt. deck a lot) dominating the center of the surrounding land uses. When the lease expired, the city finally demolished the deck. (Of course, the are combining that with some huge underground parking project.)

And I'm really not sure how I feel about a nuclear power plant downtown... I guess it would be an improvement over the City Hall building. :)

I'm all for tearing it down

I'm all for tearing it down anyway. Is it really much of a problem if people have to park farther away and walk to their destinations? Parking is going to become a thing of the past in the coming decades anyway, so let's put centrally-located land to good use.