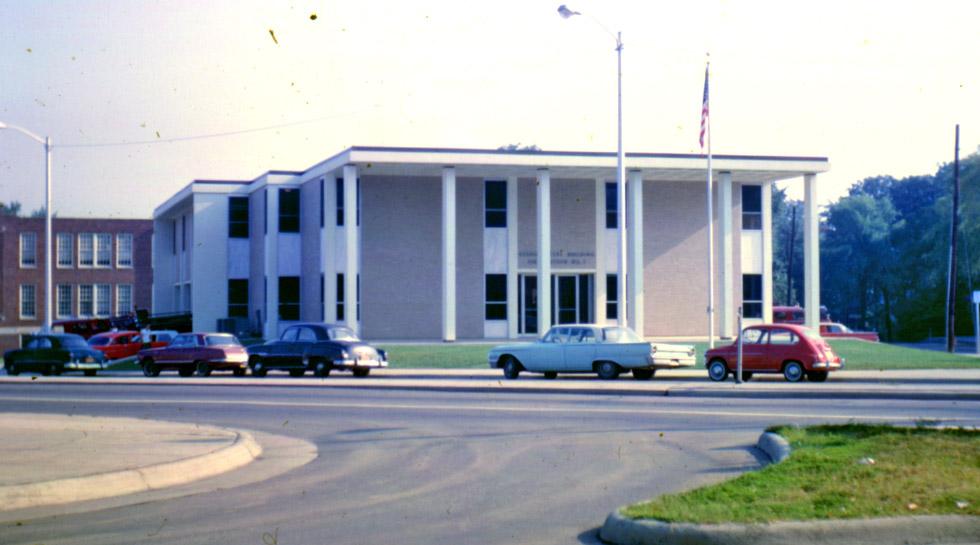 The third iteration of Fire Station #1 was part of an urban renewal project that demolished part of the formerly exclusive Cleveland Street neighborhood north of downtown.

The 500 block of Cleveland St. was, by the early 20th century, filled with large Victorian houses, constituting part of the first wave of fashionable houses of the well-to-do built along Mangum and Cleveland Sts., just to the north of downtown.

By mid-century, these early neighborhoods had seen significant transition due to commercial growth of downtown and outmigration of the wealthy. Many were transformed into rooming houses / apartments, and some were torn down for commercial uses. 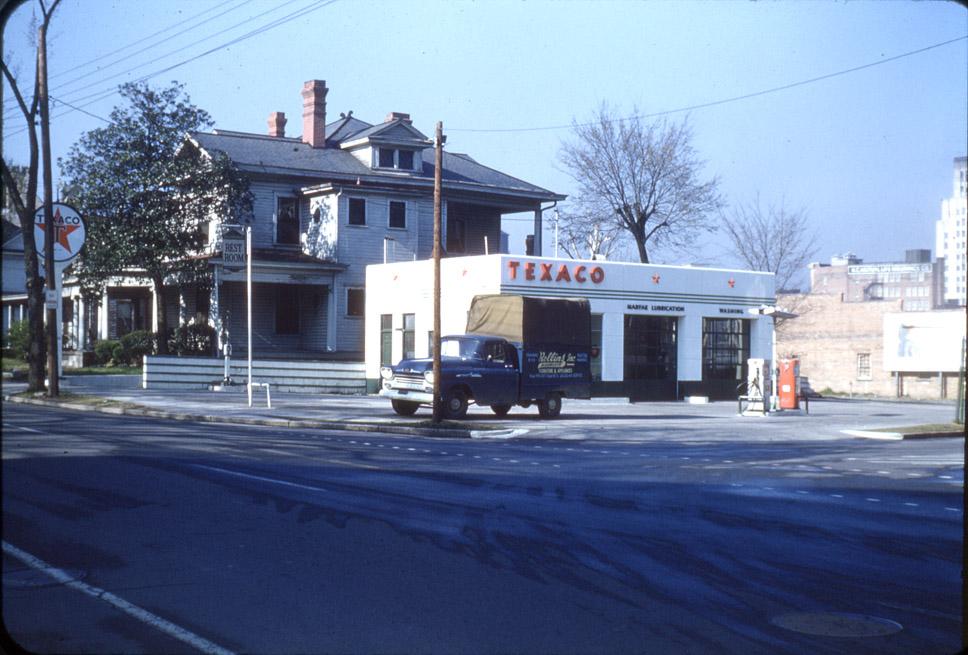 In 1961, the remaining houses on the west side of the 500 block of Cleveland St. were demolished to make way for the extension of Morgan Street east from N. Mangum St. to Holloway St. 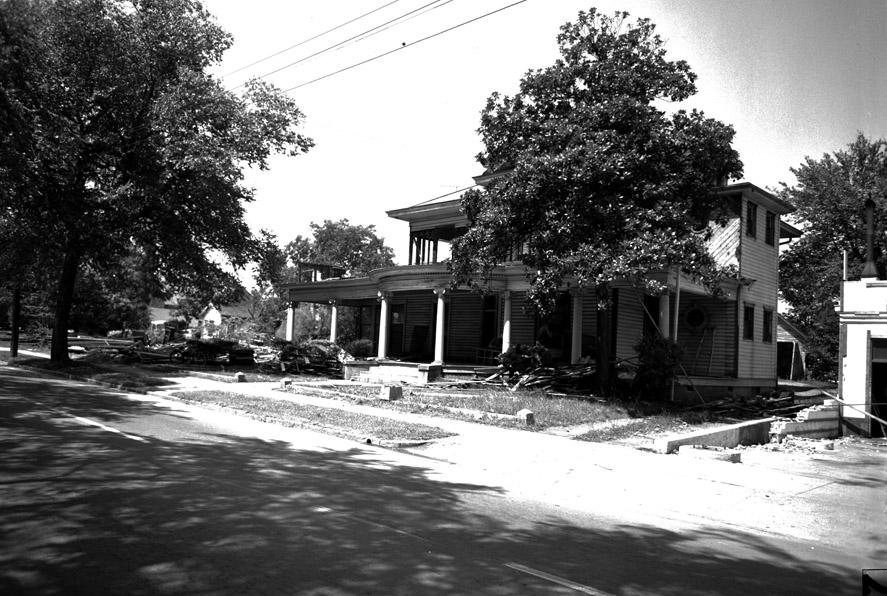 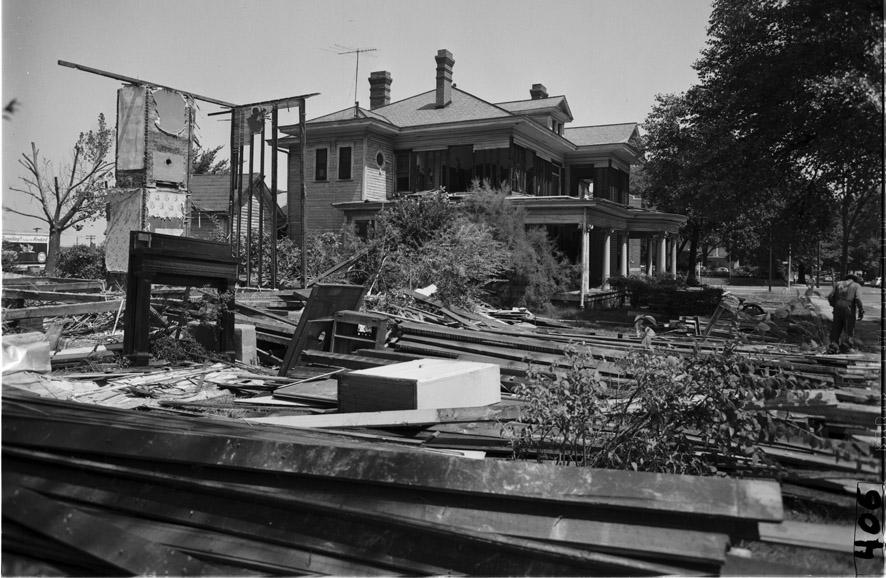 In 1964, the new Fire Station #1 was constructed on the remaining chunk of this block face, when the Fire Department abandoned the original station location on North Mangum St. 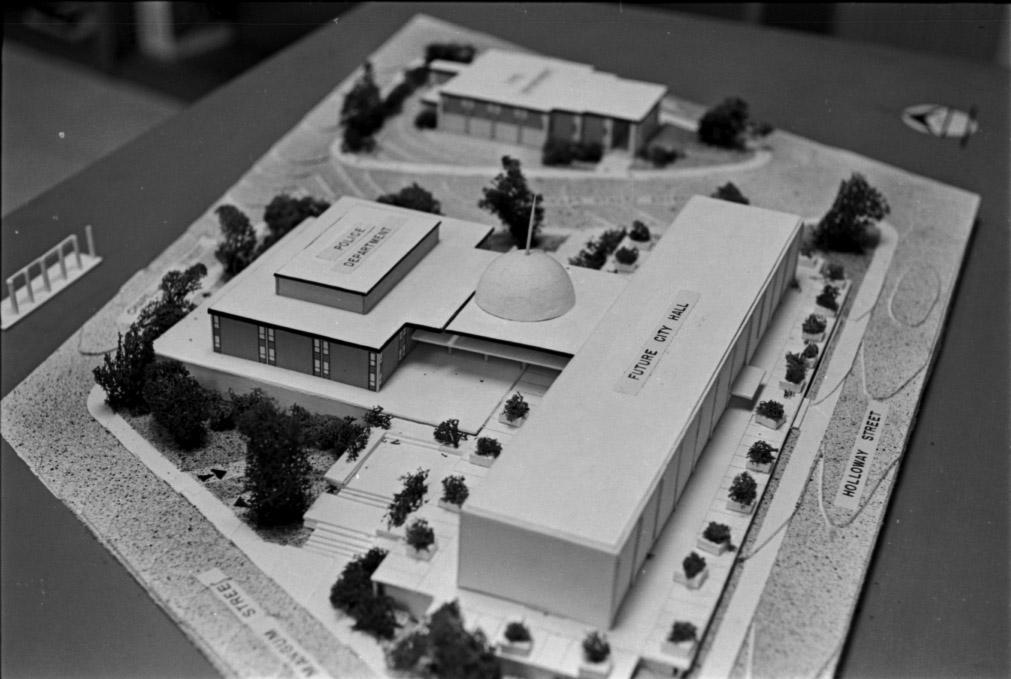 The grand plan for the city government center; fire station in the background. 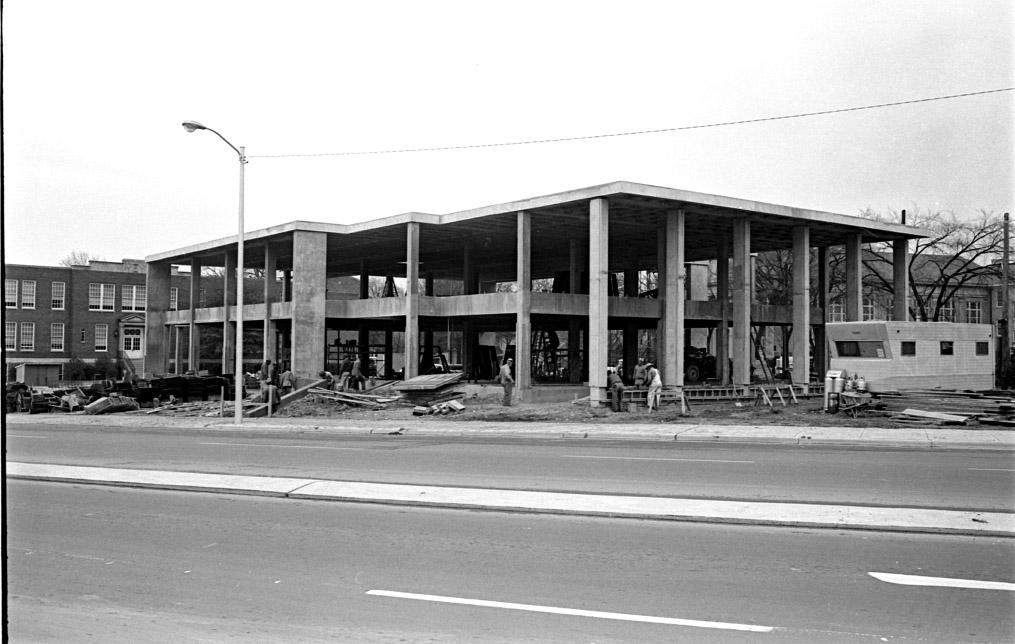 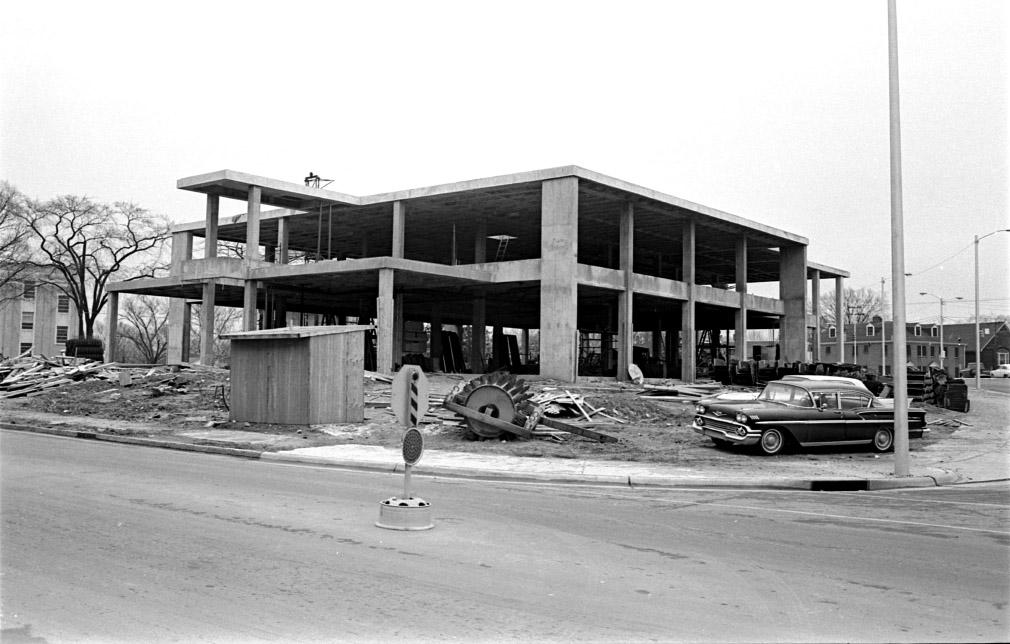 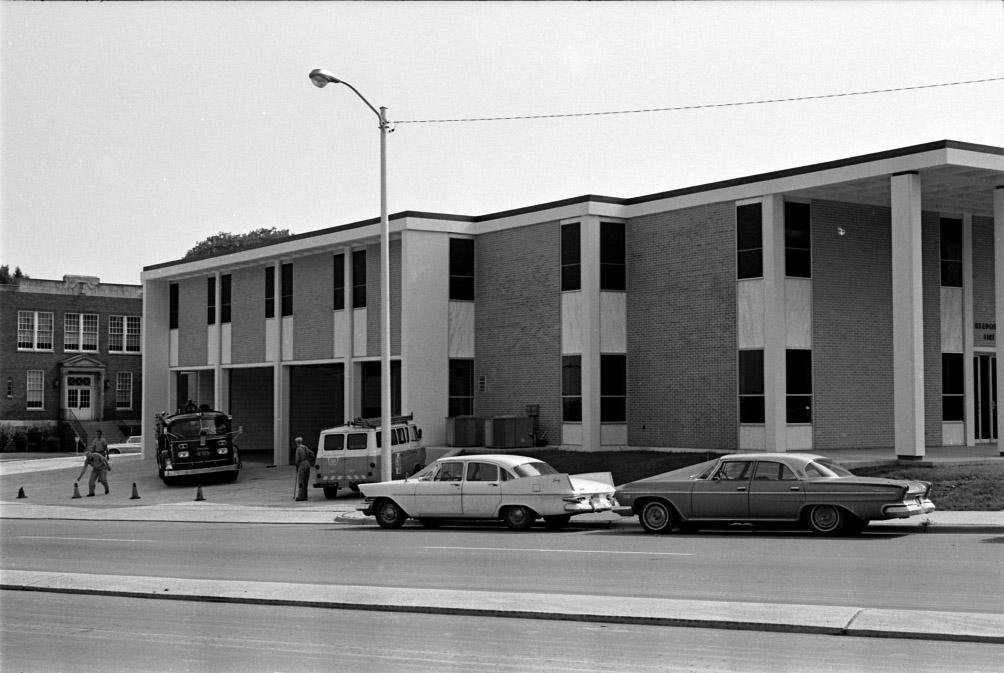 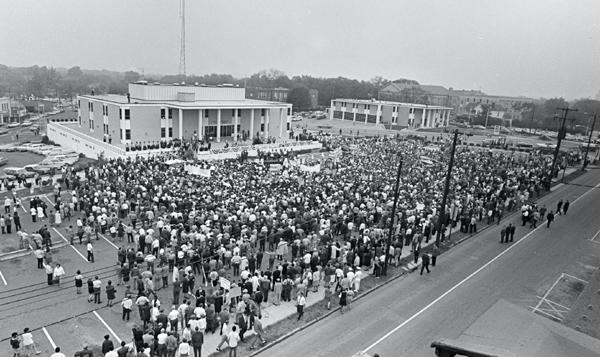 To give you a sense of the times and the divisions in Durham in the late 1960s, this was a George Wallace rally at the police station, 1968.  In less political, architectural analysis, you can get a sense for how the police station and Fire Station #1 were supposed to interact with one another in a modern interpretation of a classical forum. 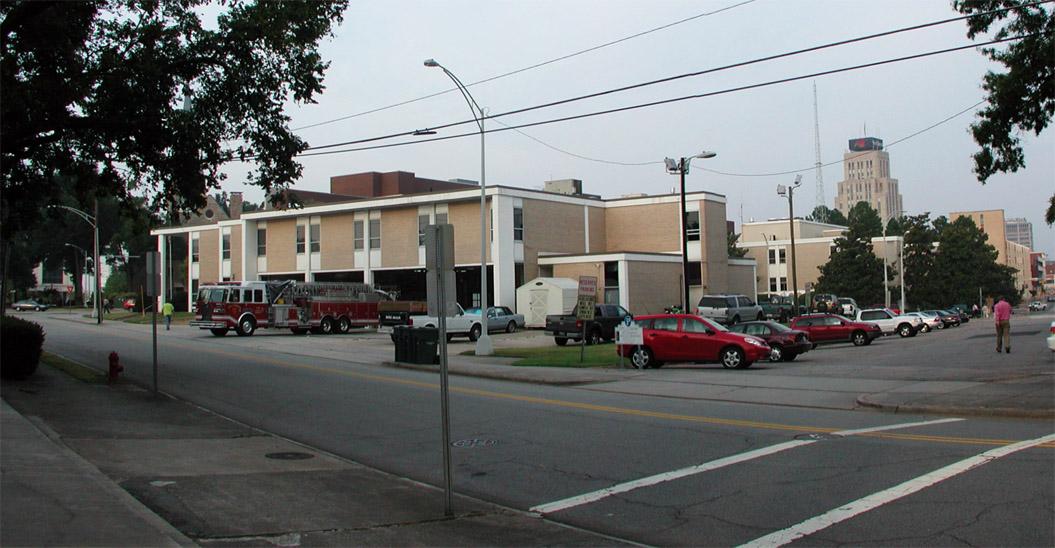 Since you probably know more about this than I do, and since the CCB Building is (barely) in both pictures here, I'm going to go off-topic a bit: Isn't downtown Durham (which I'm assuming is more-or-less the stuff inside the loop) a historic district wherein only certain kinds of changes can be made? If so, how did Suntrust get to take the "CCB" letters off the top of the CCB Building? That really changed the appearance of the Durham skyline.

Joe - thanks for your comment. Downtown (within the loop) is both a national and local historic district. You are correct that the fact that it is a local historic district means that exterior changes should go before the Historic Preservation Commission for approval. I do not know the specifics of how the decision was made, but several factors probably went into the decision: 1) The sign was probably considered a non-integral part of the structure, 2) the CCB sign advertised a specific business in competition with the new business, 3) the HPC is generally quite weak, particularly in the face of business. I agree with you; I've heard earlier generations talk about the Chesterfield sign that used be on top of the Liggett New Cigarette factory in a similar way.

Sven -- thanks. That's about what I figured. I guess a sign is a sign by any other name.

Does anyone actually know what happened to the Chesterfield sign and/or the CCB signs?