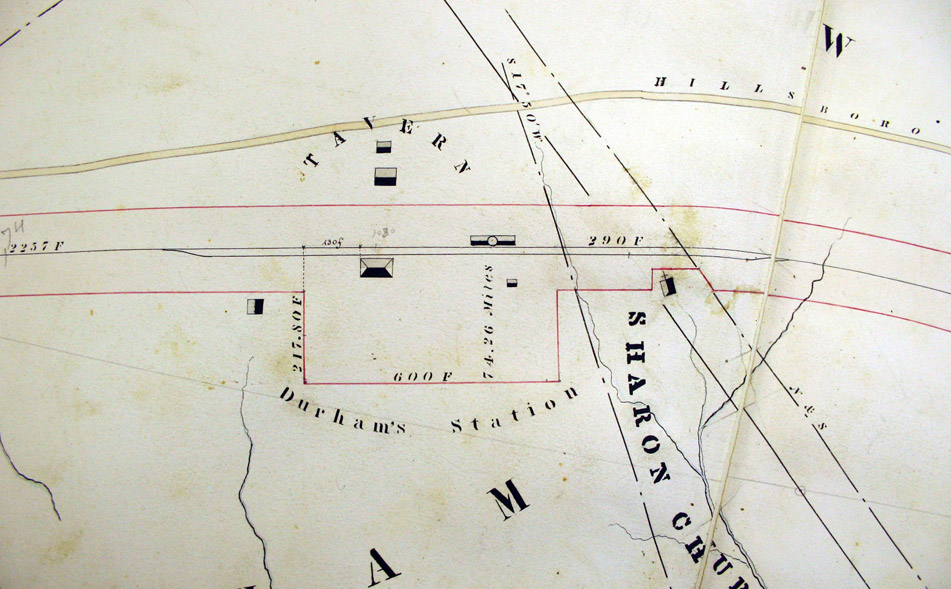 As most folks are aware, Durham's raison d'etre came with the North Carolina railroad in 1854, and the desire to establish a train depot between Hillsborough and Raleigh. I've written previously about Mr. Pratt's high price / fear for his horses (arguably making him the first in a very long line of recalcitrant Durham-area landowners with an overly optimistic view of the value of their land/suspect improvements theron) that led the NCRR to seek out Dr. Bartlett Durham for land upon which to locate their depot. 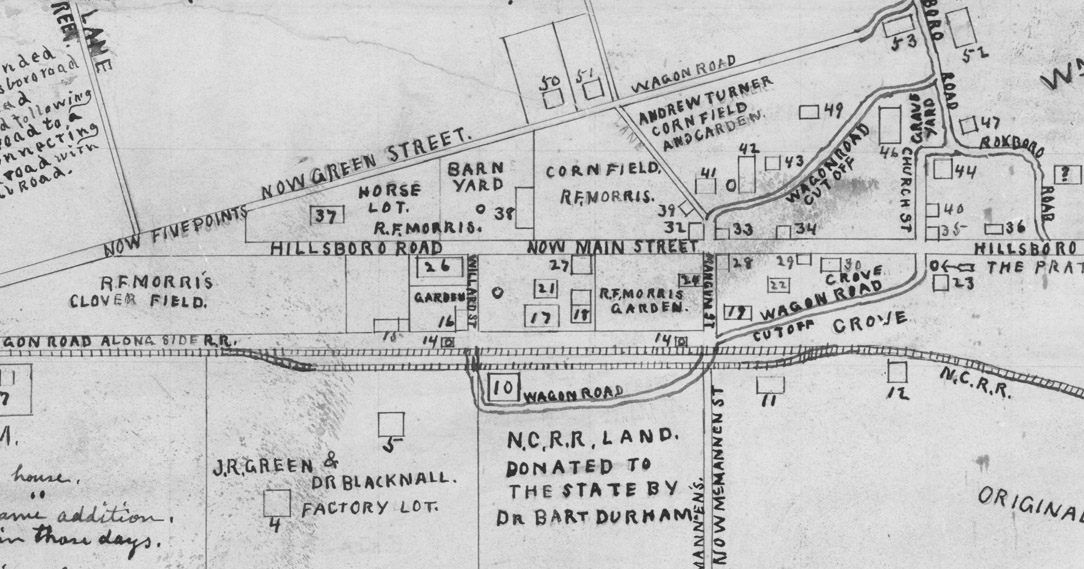 Blount's map of Durham in 1865 - #10 is the railroad depot
(Courtesy Duke Rare Book and Manuscript Collection. Scanned by Digital Durham)

Durham's early passenger service has always been a bit of a mystery to me. The Southern Depot, located north of the railroad tracks and just west of Corcoran St., clearly provided passenger service by the 1890s, and it appears that the Seaboard Station, located at Dillard St., did the same. (Both prior to the establishment of Union Station in 1905.) But I can only assume that passenger and freight were handled out of the same Durham Station Depot in the early decades; Hiram Paul describes only one passenger service station in his 1884 history, and he describes it thusly, reproduced with its original cringe-worthy elements of antiquity intact:

"Railroad facilities are hardly adequate, only one train a day each way being allowed by the liberal policy of the Richmond and Danville system. The depot is a reproach, there being no reception room for either ladies or gentlemen, and the apartment used as such, and adjoining the ticket office, being so filthy an[d] offensive that ladies never apply for tickets, except in cases of absolute necessity. It is about 12x14 feet, and is used almost continuously by negro section hands as a kitchen and sleeping quarters. The walls are black with soot and grease, and the floor is caked with grease and dirt. It is just to add, that the managers are perhaps not aware of the real condition of things. It is to be hoped, however, that the importance of the city will arouse this mammoth monopoly from its complacent lethargy, and that decent facilities at least will soon been afforded."

By 1905, passenger service was provided out of Union Station. Several other freight depots would be constructed along the main line and the belt line; the original depot site became the site of the Southern and D&S Freight Depot by the 1890s, and would remain such through the 1920s. 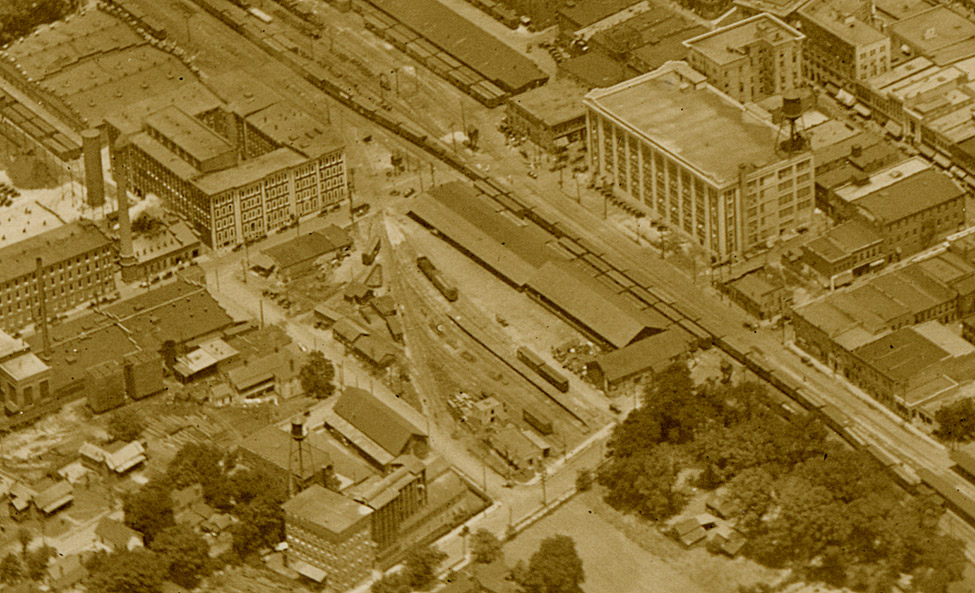 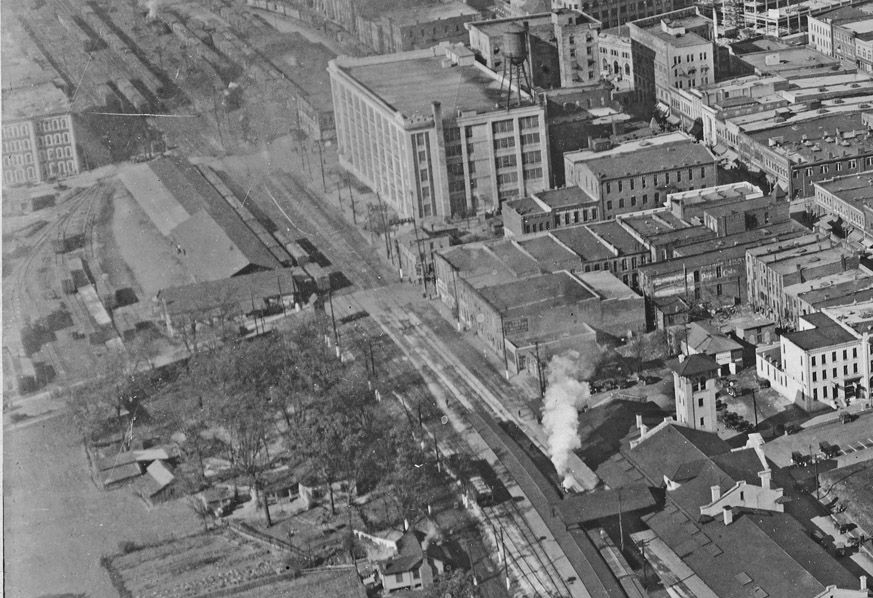 Note how this depot sits to the north of the front facade of the Bull Building at American Tobacco - abutting the railroad tracks and sitting on top of present-day West Pettigrew St.

Between 1924 and 1937, the depot buildings between Vivian and the railroad tracks were demolished. Pettigrew Street was opened between Blackwell and McMannen (Mangum) Sts, and a new series of freight depots were constructed fronting Pettigrew St. A new, block long freight depot was built between McMannen and Pine St. (its eastern terminus a handsome neoclassical office building that was unnecessarily demolished for vacant land when our Ivory Tower of Incarceration was built in 1993.) Between McMannen and Blackwell, an auto unloading platform was built. Both were constructed by the Southern Railway Company. 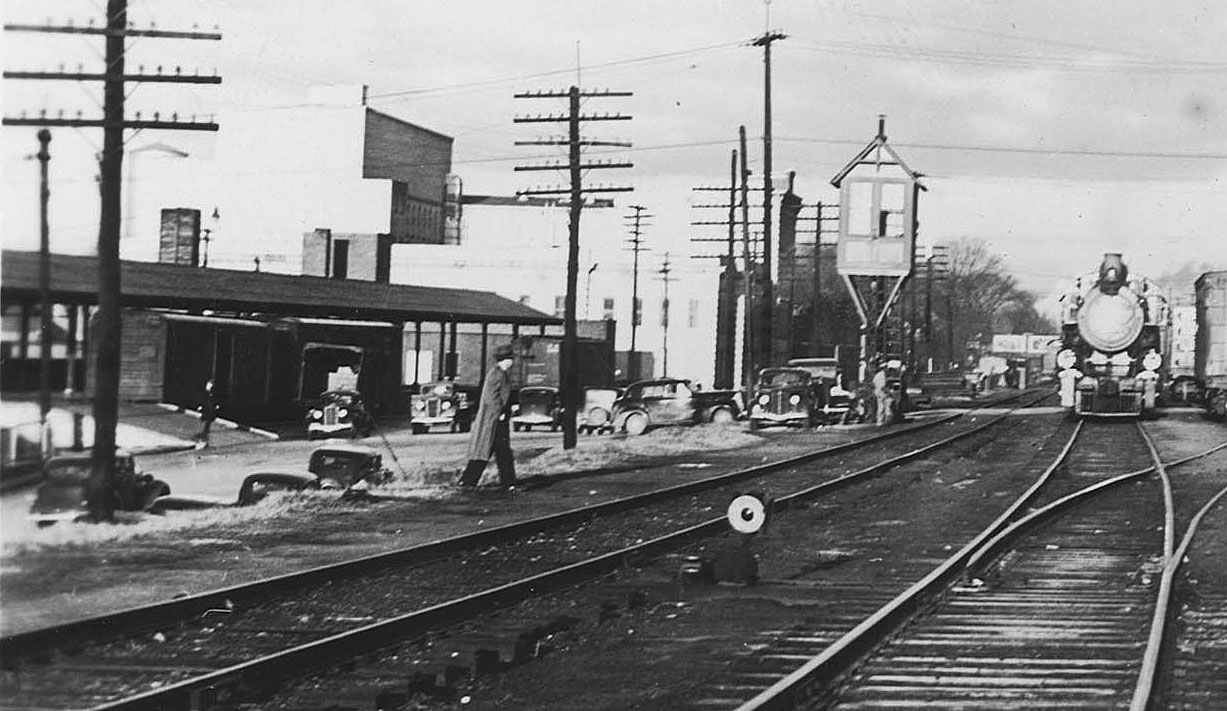 December 1941, as Oregon State arrives to play in Rose Bowl at Duke post-Pearl Harbor. The depot can be seen on the left side of the photo. (Courtesy Duke Yearlook.)

The auto platform became a bit of a curious anachronism - built in recognition of the new exploding popularity of the automobile, and the number of cars that would need to be freighted into Durham to meet that need - but without the foresight that truck transport would quickly supplant train transport to bring these vehicles to Durham. This building is rarely referenced, but a 1953 newspaper article notes that the auto unloading platform was "[then] seldom used" and that the enclosed portion of the building had been rented out for storage for some time. (However, if anyone was curious why this platform was designed the way it was - long and skinny, with a sloping grade down to street level, you can picture the idea of cars being driven off of it.)

Likely from the 1930s or 40s onward, this building was used as a warehouse structure.

It's not really specific to the building, but the corner in front of the platform (at McMannen and Pettigrew) was sometimes referred to as "buzzard's roost" by the African-American community - a spot for day laborers to get work. Billy Barnes termed it as such in his 1966 photo, below. Interestingly, this term was also sometimes used by the community for the segregated balcony at the Carolina Theater. 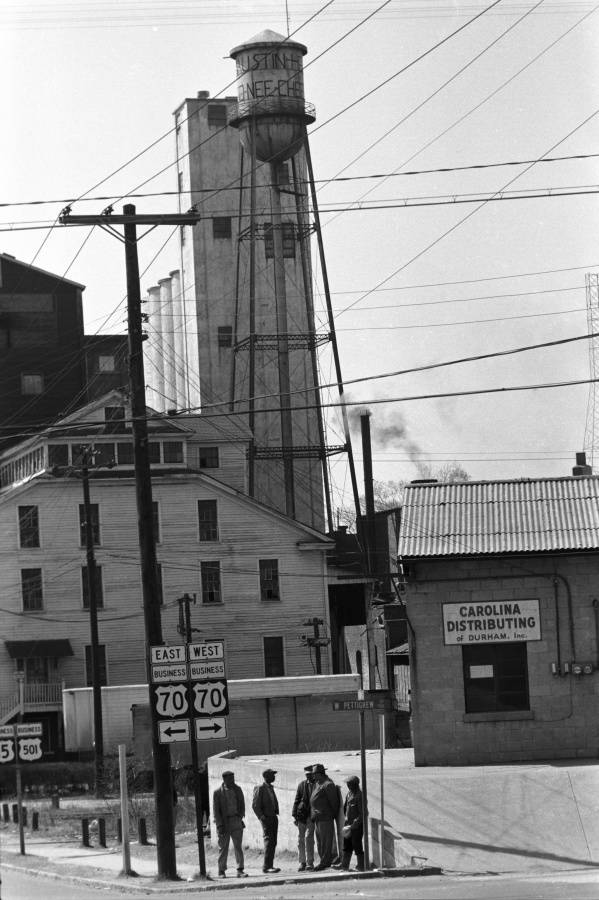 Looking south from McMannen and the railroad tracks. The Austin-Heaton flour mill is in the background.
(Billy Barnes Collection, North Carolina Collection, UNC) 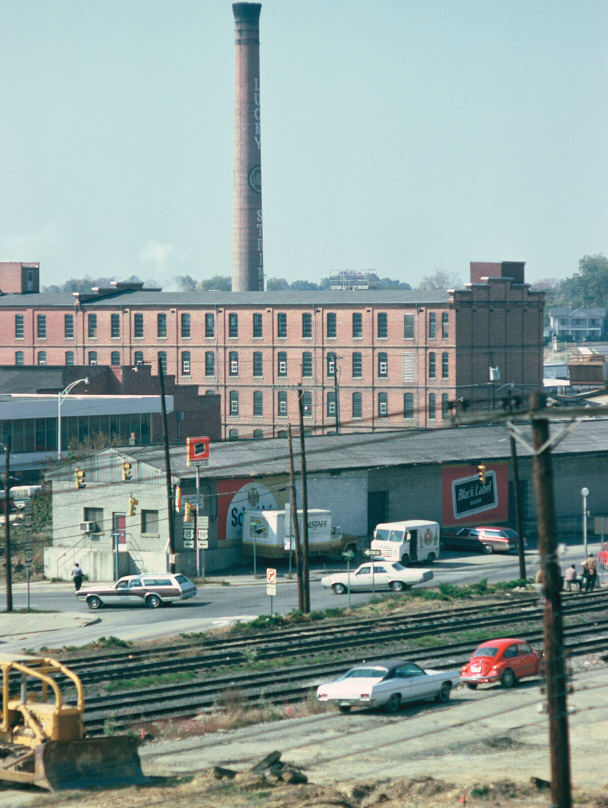 After the demolition of Union Station in 1968, the Southern freight depot in 1993, what I believe to have been the remnants of the Seaboard Airline station in 2007, the auto platform remained the last early 20th century vestige of the train industry in downtown Durham - interestingly, at the train industry's first location in Durham. 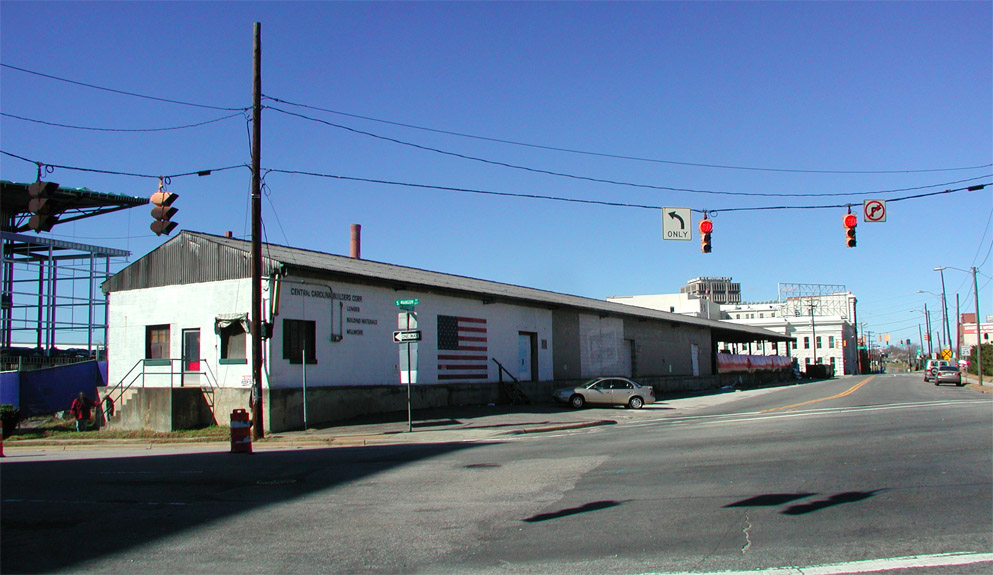 I don't know much about the details worked out between Capitol Broadcasting, the city, and the NCRR that allowed the auto platform to be demolished - the railroad, as is clear from the trackage visible in the historic pictures owns/owned the land southward to and including Vivian St. Regardless, the depot was demolished in September 2008. 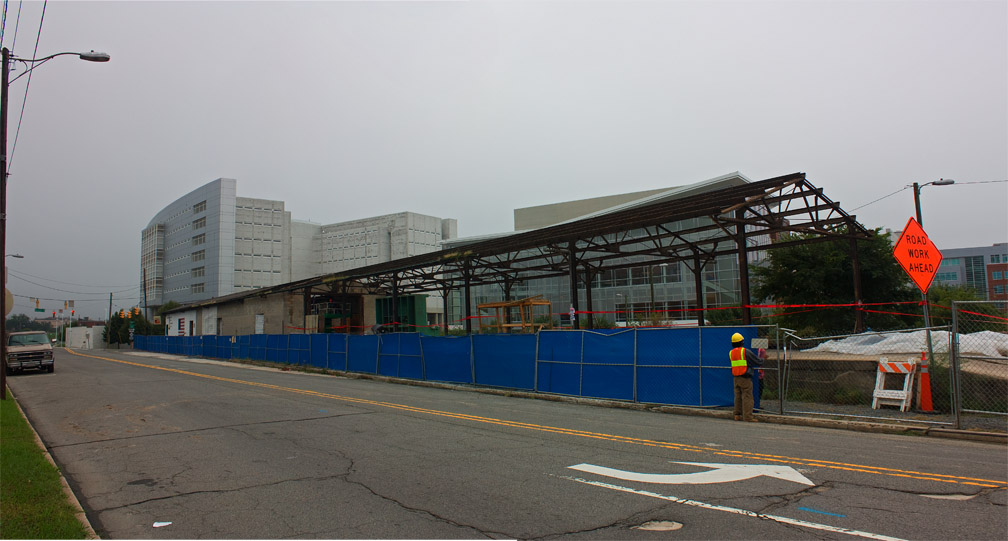 I admit that I felt rather ambivalent about the demolition; it was always a fairly ugly building, in my opinion, and I appreciated the desire to open up the vista to the DPAC. I felt less ambivalent when they started to remove the roof and I saw the steel truss structure underneath - I thought the naked steel truss structure and platform - devoid of roof and concrete block, actually would have made for a very cool public space, with enough transparency to show the buildings beyond, but enough architectural character and structure to make for a neat gathering spot and tie-in to our railroad history.

Not to be. So the land is green space, which I can say is at least more attractive than the concrete block, piles of storage and padlocked chainlink that fronted West Pettigrew St. for so long, and asphalt space, our thirst for which remains ever unquenched. 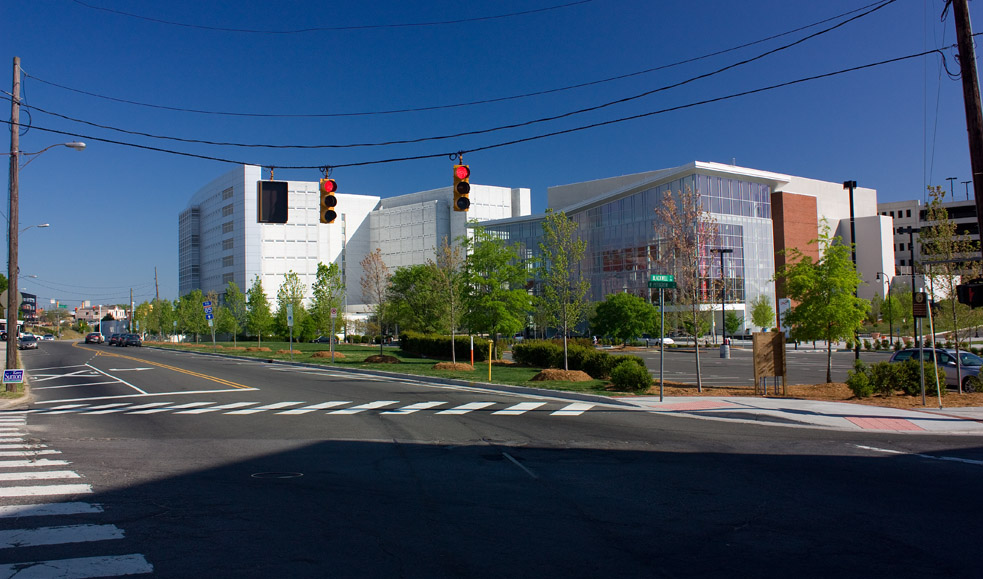 Long term, the plan from Capitol at one point involved new construction on this site; my guess would be that that would be on the far back burner at this point, but I'm not privy to their plans - since Diamond View III, the planned next step for Capitol, seems to be moving forward, the question as to what comes after DVIII is in the air.

A personal hope would be that some organization gathers adequate funds to make a Durham Museum a part of the site with Capitol - or perhaps something more train-specific. It remains a shame that the core of Durham - Dr. Durham's house and the first train depot, split by the NC RR, are vacant parking lot/grassy space, with no sense or acknowledgement of the importance that land played in the genesis of the city.

The wooded area east of

The wooded area east of McMannen and south of the tracks in the 1920s photos has some 50 year old trees and several old houses. This might be 'real' old Durham.

I always heard that the

I always heard that the origin of the nickname "Buzzard's Roost" came from a slaughterhouse once located immediately behind SR Automobile Platform that attracted buzzards that would perch on the Austin-Heaton flour mill.

According to the city GIS,

According to the city GIS, and to my knowledge, the parcel is still owned by "Southern Railway Co.," although I assume that's the part of Southern that became part of NSX. (I'm forgetting my RR history here.) Last I heard, the RR declared they intended to do some kind of development on it of their own, but unsurprisingly, they've failed to do so. Getting the old depot torn down was probably about as much as the Capital could get them to do.

Southern merged with Norfolk & Western to form Norfolk Southern. The other major east coast RR is CSX, which combines Seaboard with the Chessie System (itself a merger of C&O and B&O).

The Indy published an

The Indy published an evocative photograph after the depot was torn down. It's viewable here:

What I always remember about

What I always remember about the auto platform was the "Black Label" beer advertisement that was painted on the building.

You can see it white washed over about the gold car in the picture.

Oh yeah, Buzzard's Roost. It was still in effect right up until that building was demolished. When demolition started the perch moved across Pettigrew St.

I'm with anonymous on the Carling's ad.... I've remembered that ever since I was a kid. Great post Gary.

"Hiram Paul describes only one passenger service station in his 1884 history..."

That would seem to make sense, given that the NCRR line thru Durham, which by 1884 had been operated under lease by the Richmond & Danville RR for some 13 years, was the only rail line in town till the opening of three new lines connecting Durham with Clarksville, Henderson, and Lynchburg via South Boston between 1888 and 1892.

Perhaps the shack described in Hiram Paul's history was the original station erected on Bartlett Durham's donated land in the 1850's, but I don't know. Although the NCRR had to replace some of its stations that had been destroyed during the Civil War, the Durham station wasn't listed as one of them.

As a kid in Durham in the 1970s, I definitely remember the beer ads plastered along the walls of the later freight depot. It seemed to me that during those years the depot was being used as a warehouse for a beer distributor.

Maybe if that parcel gets

Maybe if that parcel gets developed, they'll finally require a sidewalk on the south side of Pettigrew St. between Blackwell and Mangum.

I would say that structure

I would say that structure was built post-WWII. The concrete block and steel girder system seems to date from the period...

But, perhaps the foundation was from an older structure

It appears on the 1937 Sanborn map; I doubt they would rebuild it within a few years on the same footprint. Steel frame structural elements like this were commonly used in warehouse buildings by the late 1920s. The CMU section may have been added later, but I feel comfortable saying that the steel and platform were in place by 1937.

Didn't realize it was

Didn't realize it was demolished so recently. What a waste!