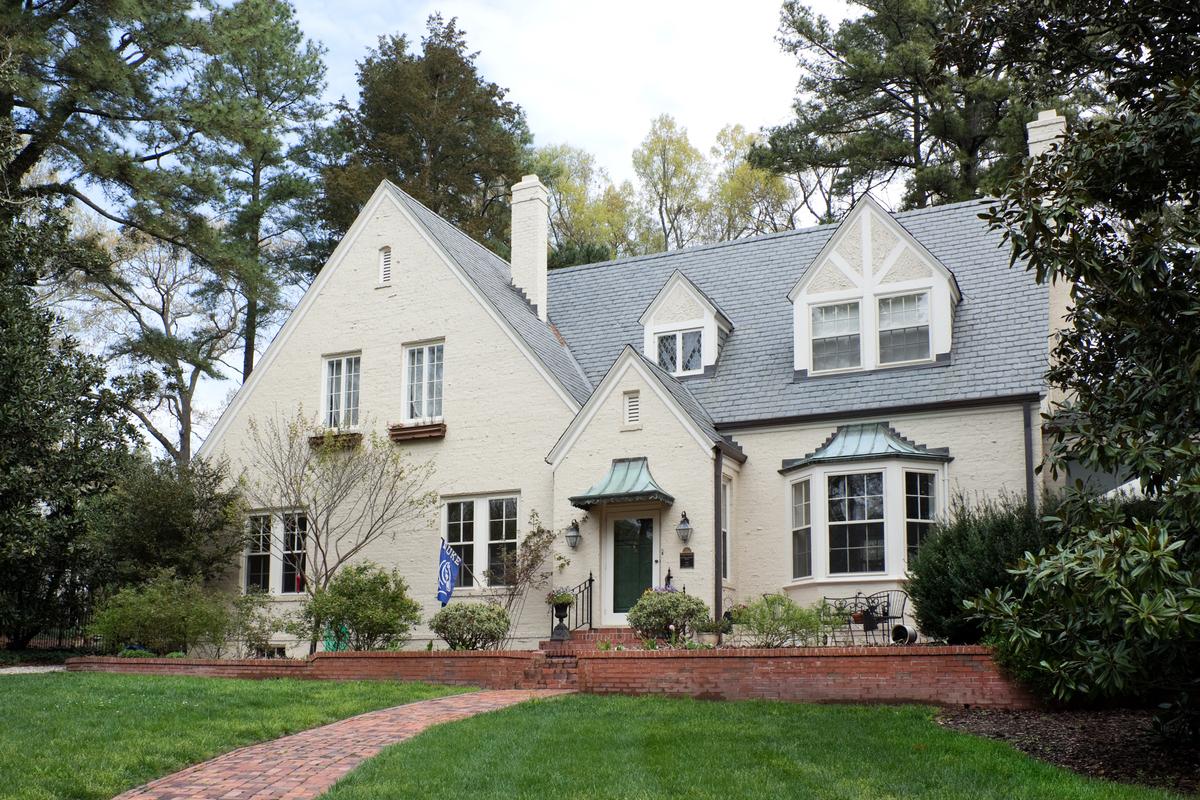 Situated on a slight hill on a large parcel of land overlooking Forest Hills Park, the welcoming Coppridge-Hobart House exemplifies the restful graciousness of the city estate.  Built in 1925 for Dr. and Mrs. William Maurice Coppridge, the Tudor Revival home has been lovingly cared for throughout its 87 years.  The home has had only three owners, all of whom have been physicians.

William Coppridge was born in Virginia in 1893 and educated at the University of North Carolina at Chapel Hill.  He earned his M.D. at Jefferson Medical College in Philadelphia in 1918, returning afterwards to Chapel Hill to teach pathology and to begin the organization of a clinical pathology laboratory at Watts Hospital in Durham.  He married Ferrie Patterson Choate, a University of North Carolina infirmary nurse, in 1919.  Early in their married life, they lived on Ward K in Watts Hospital, where Mrs. Coppridge was operating room supervisor.  They are listed in city directories at various other addresses in Durham before settling into their new home in Forest Hills in 1925.

The architect of the home may have been Arthur C. Nash, who moved from New York City to Chapel Hill in 1922 to serve as campus architect overseeing the expansion of the University of North Carolina at Chapel Hill.  He and engineer Thomas C. Atwood formed the firm Atwood & Nash, which had an office in Durham in the Loan & Trust Building at 212 West Main Street downtown.  Working at both UNC and at Watts Hospital (where Atwood & Nash had been hired to design the Valinda Beale Watts Pavilion, completed in 1926), Coppridge would have known the architect well, and it seems likely that Atwood & Nash would have been his architectural firm of choice.  Another clue is a set of 1948 plans for an addition to the home which carries the title-block Atwood & Weeks.  This is the firm that succeeded Atwood & Nash after Nash’s retirement in 1930.

For well over a decade the white house on the hill was the only one on this section of West Forest Hills Boulevard.  Until 1929, the park in front of the home was part of a golf course.  The Coppridges raised two sons in the home, James and Alton, and the family had two servants – a man and a woman – who lived in a building (now gone) behind the house.  The man served as the gardener and chauffeur, and the woman was the maid and cook.  Alton Coppridge’s best friend was the boy growing up in the large thirteen-acre estate “Pinecrest,” across the street.  One of architect George Watts Carr’s early commissions, “Pinecrest” is a Tudor Revival home built in 1927.

The visitor approaches the Coppridge-Hobart house along a beautiful brick walkway that leads to the entrance terrace where iron rails on either side of the door welcome visitors like open arms.  The copper awning over the door and the similar awning over the bay window are two of the home’s most distinguishing features.  Tudor details on the exterior include the brick wall cladding, the half-timbered gable over the bay window, the diamond pane casement windows in the dormer above the entrance gable, and the dominant front-facing gable with overlapping small entrance gable.  Tall, narrow windows – like those in the main gable – are also a hallmark feature of the Tudor style.

One enters the home under an arched transom into an attractive front hall.  Through an opening on the right is a large living room with a fireplace.  A bay window was a later addition by the original owner, though it appears that it has always been in place.  Notice the symmetry in the original plan, with matching doors on either side of the fireplace leading to the porch, matching door openings on the opposite wall leading into the front hall and dining room, and an identical pair of windows along the back wall.  Off of the living room is a lovely, large screen porch with arched bays.

In the dining room is another Tudor-inspired diamond-paned bay window, also a later addition by the original owner, Mrs. Coppridge.  The pair of scalloped corner cabinets were also added by Mrs. Coppridge.  A story is told that the installer unknowingly placed the cabinets upside down until Mrs. Coppridge set him straight!  From the dining room, one enters into what was the original butler’s pantry, which once contained a breakfast nook.  The attractive newly-renovated kitchen and added breakfast room are part of a just-completed project taken on by the current owners, who hired architect Sasha Berghausen of Blok Architecture to redesign an underused, unconditioned space with cracked-tile flooring which had been a later addition to the house.  Berghausen reconfigured the kitchen, added the tastefully executed breakfast room, and took over much of the unconditioned space to create a guest bedroom.  With what remained, he created a mud room where the visitor can see the original tile flooring.

The other downstairs rooms – those on the front east side of the house – were originally much as the visitor sees them now.  The room off the entrance hall was originally a den, with a sofa and many bookshelves.  The larger room was Dr. Coppridge’s office and personal bathroom.  The Coppridges later removed the wall between these two rooms to make one large family room.  The current owners have had the original wall re-erected and will use the back room as a family room and the room off the entrance hall as an office.  Upstairs, one finds three spacious bedrooms, two baths, and much storage and closet space.

After William Coppridge died in 1959, the family sold the house to a Watts Hospital colleague, Dr. Seth Hobart, Jr., and his wife Mary, who lived in the home for over forty years.  The current owners, who purchased the home from Mrs. Hobart in 2004, have gone to great lengths to respect the historical integrity of the home, making minor changes reflective of this respect.  The home remains a peaceful yet happy haven within the Bull City.