West Trinity Avenue
Durham
NC
Year built
1892
Year(s) modified
1914
Architectural style
Shingle Style
Construction type
Frame
Stucco
Neighborhood
Duke East Campus
Use
Residential
Building Type
Institutional
Can you help?
You don't need to know everything, but do you know the architect?
Log in or register and you can edit this. 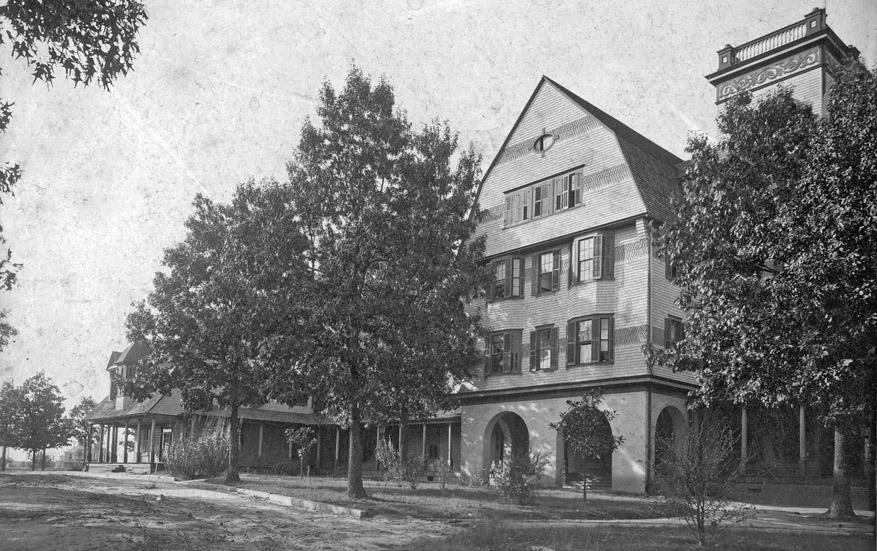 The College Inn was built between 1890 and 1892 with a $30,000 gift from Washington Duke. A large, rambling Shingle Style structure, the building was a center for social activity at the college, a dormitory, and hotel. The first floor contained a dining hall, parlor, chapel, and guest rooms. The second and third floors contained 75 dormitory rooms. Board was $10 a month at the dining hall. An on-site dynamo provided electricity sufficient to provide a light bulb in every dormitory room - more than the vast majority of the city of Durham could claim at the time. 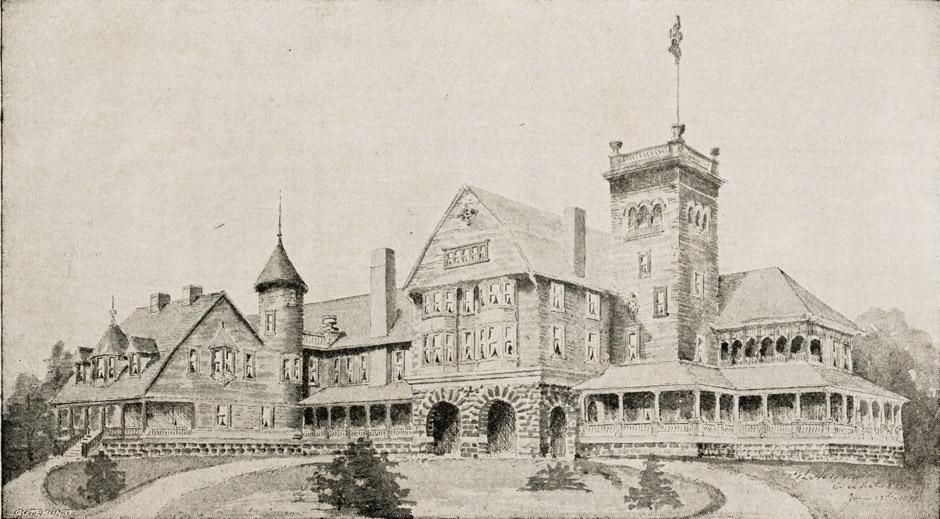 Wyatt Dixon wrote a recollection of Epworth in the 1930s which gives a sense of life in the all-purpose building.

The Inn, as it is known today, is only one wing of the structure which once covered nearly half an acre [...]. In its original state, the Inn's gables, dormers, towers, arcades, and porches projected in all directions. It was built in the style of an old English tavern. The building has been the subject of admiration from visiting architects. Even though a large part of the building was destroyed by fire, it continues to attract attention.

One wing of the destroyed portion of the building was known as Cat’s Head and housed many generations of Trinity alumni. It is said that a group of students known as the "Dirty Dozen" occupied the wing. They so terrorized the freshmen and scandalized the dean that they were dubbed "the cats." For two years the building was not used as a dormitory. In the summer of 1914 it was remodeled when the eastern portion of the building, three stories high, was torn down, including the tower.

Epworth Inn was constructed at a cost of $31.679 and was the gift of Washington Duke, who gave many thousands of dollars to the college. The dining room had a seating capacity of 250 persons in its original state, but in 1914 the 75 bedrooms were reduced to 45 rooms. An old alumnus wrote in his memories of the inn that "at the very mention (of its name) there leaps out of the past the sound of a thousand hearty voices . . . and a thousand hands reach to me across the span of a seeming age,"

Dr. H. E. Spence, in his book "I Remember," gives an excellent description of the building as it was in its original state. "Closely rivaling the main building in importance was the Epworth Building, commonly known as the Inn," he writes. "Here was located the only public dining room managed under college auspices. The building was four stories high. On the first floor was the YMCA hall, a spacious room accommodating a couple of hundred students. Here public debates, religious exercises of all sorts, class meetings, and other public gatherings were held. Some dormitory room was available on the first floor. The majority of the rooms, however, were on the second and third floors. Fantastic names were given the various sections of the building. Among these were Ragged Row, Wall Street, and an alley whose qualifying adjective is unprintable. The fourth story consisted of one lone room - a fraternity initiation room. Just before its mysterious door was reached, there was a long circuitous stairway opening out of nothing but a four-story drop. The candidates were reminded of this as they entered the hall. A part of the initiation consisted of blindfolding the candidate, bringing him to where he could feel the edges of these open arches and then throwing him downstairs. Of course, he was thrown down these steps instead of out the window, but the thrill of the 10 or 15 foot drop before he hit the blanket, held by waiting students, was a rather graphic experience. "

According to Dr. Spence, the first floor contained a lounging room where many students met after supper to engage in some spirited bull sessions. Here was formed what he described as the most unusual organization he has ever known. One night a group of students were sitting in the room when a student walked in. Without previous arrangement, the men sat silent for a moment, then broke into loud and prolonged laughter. The student looked puzzled. The more puzzled he looked, the louder was the laughter. In this fashion the Damn Fools Laughing Association was formed. The lounge became one of the most popular gathering places on the campus. When a new student came into the group. every man in the the room would laugh as though he was looking at the most ridiculous spectacle they had ever seen. If the student couldn't stand the treatment, he left and didn't come back. 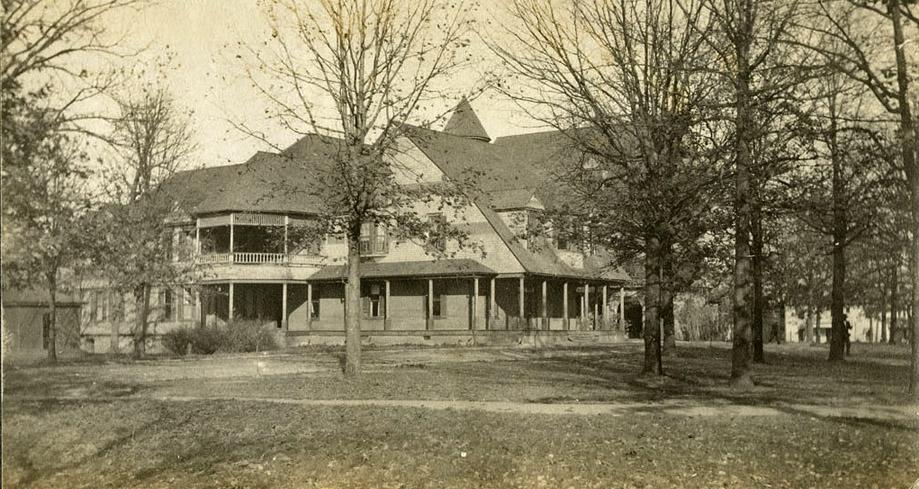 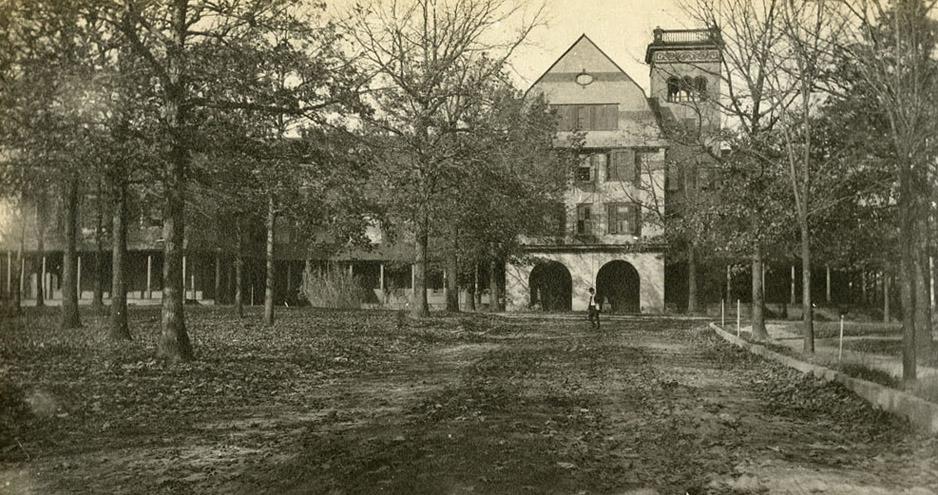 ... and another, equally colorful description from an alumnus

"Memory of the Old Inn" is the topic of a story about Epworth Inn written by C. R. Warren of the class of 1906 of Trinity College which appeared in the first issue of the Trinity Alumni Register. [It reads, in part,] ‘One of the first buildings erected on the new campus in Durham was the Inn, afterwards named Epworth Building. This was a building of great beauty from the standpoint of architecture. Here lived the majority of students for many years, and around this dormitory have centered some of the most cherished memories and traditions of generations of Trinity men.

This was the center of the activities of college life. On the first floor were the large dining hall, YMCA hall, and parlors. Chapel exercises were held here, and until Craven Memorial Hall was built the commencement exercises were conducted in the large dining hall. On the verandas of the Inn students were accustomed to gather, sing their college songs, and discuss questions in which they were interested.

The time came when extensive repairs must be made to the building, and for two years it was not used as a dormitory. It was decided last summer to overhaul the building and thoroughly remodel it. The eastern portion of the building, which was three stories high, was torn down together with the large tower. The portion preserved was covered with slate. plasticoed on the outside, replastered, repainted and refloored. The building bas been divided into two sections and has been furnished with all modern conveniences. Shower baths have been provided for each section and running water for each room.

I shall never forget the impression made upon my mind when I first had the pleasure of looking the old inn over. I mean a part of it. I do not think there was ever a man who really knew every turn and corner of it. It covered nearly an acre of ground and faced to all points of the compass except north. It had a roof which from above looked like most anything you might think of that had no special shape or outline. I cannot describe it, for I am not sure that I ever saw it all. The halls, alleys, winding stairs. and various passages formed such a labyrinth of intricate turnings and twistings that truly one, on entering, must leave a skein of thread in order to get out.

The old inn had some rooms. It was like the widow's meal barrel and oil can. It never was full to my knowledge. It was the home of the freshmen. Almost every freshman that came to Trinity landed at the old inn for at least half of his first year.

The old inn was an entire institution within itself. There was a chapel, dormitory rooms galore, a library room, offices, recitation rooms, kitchen with basement and storage and a large dining room.

When I was there, the college had been making wonderful strides, and the recitation rooms had been converted into dormitory rooms. It was in one of them that I spent two of the happiest years of my life. A large porch ran about half way around the entire structure and there were two entrances.

It was in the old inn that Zack Beachboard had his boarding house and starved us all while he got rich. It was here that Warren had his barbershop and chopped the hair and faces of his trusting victims. It was here that Joe Pitts had his Regal Shoe Agency and took our money while he made us wait for the shoes. Here Aiken bad his candy. pop, chewing gum. and tobacco joint, and would not sell us his poison on credit. Here Zalph Rochelle had his pressing club and burned up our clothes, but didn't care: it was college and we were there.’ 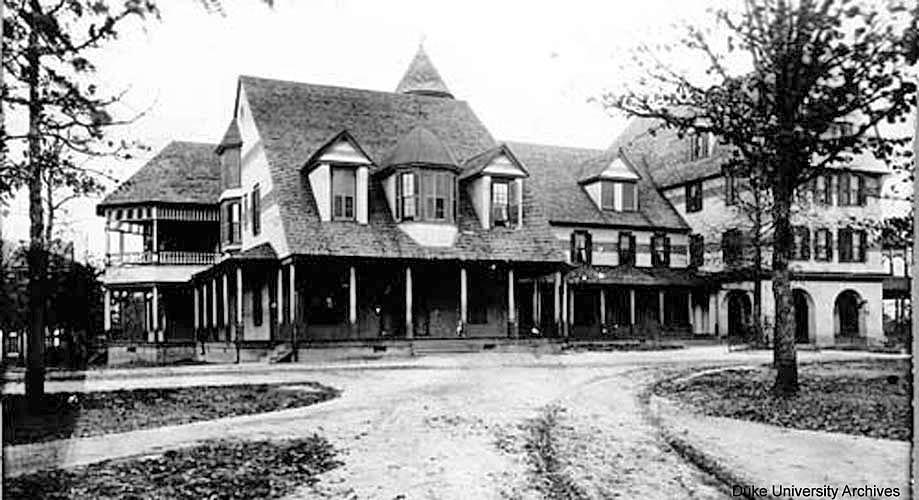 By the 1910s, the Inn had fallen into disrepair, and fire had damaged a portion of the building, In 1914, the eastern 2/3 of the building was demolished. The remainder was remodeled; the shingles were removed and the exterior stuccoed. 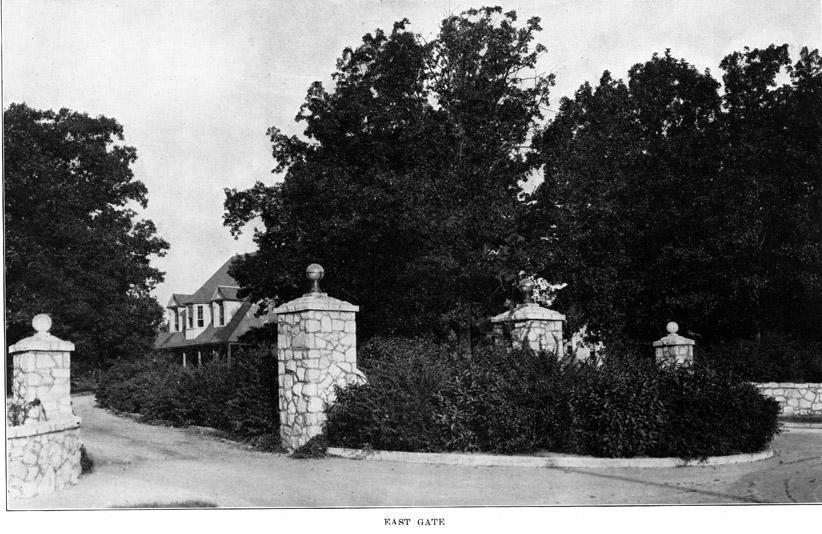 While the structure has been remodeled multiple times in the interim, it remains a dormitory. 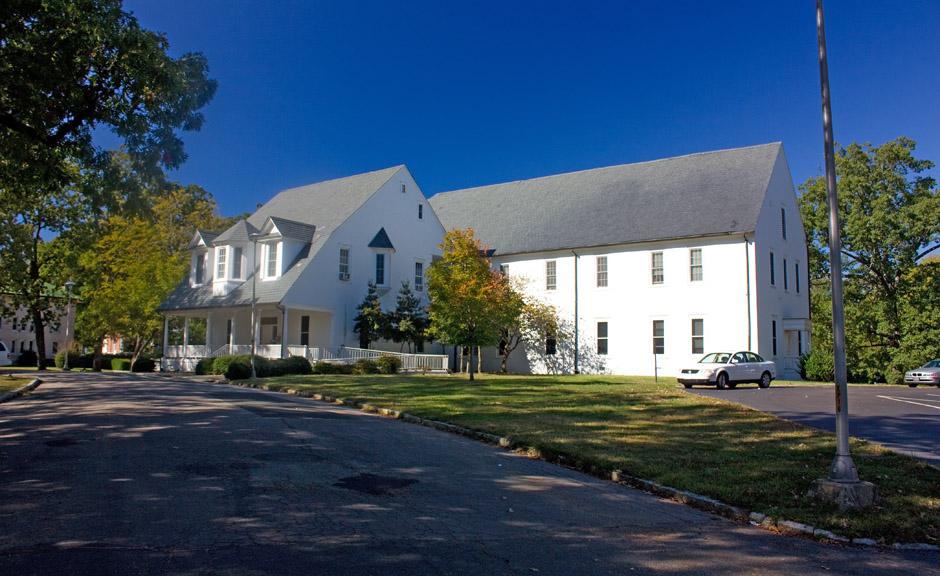 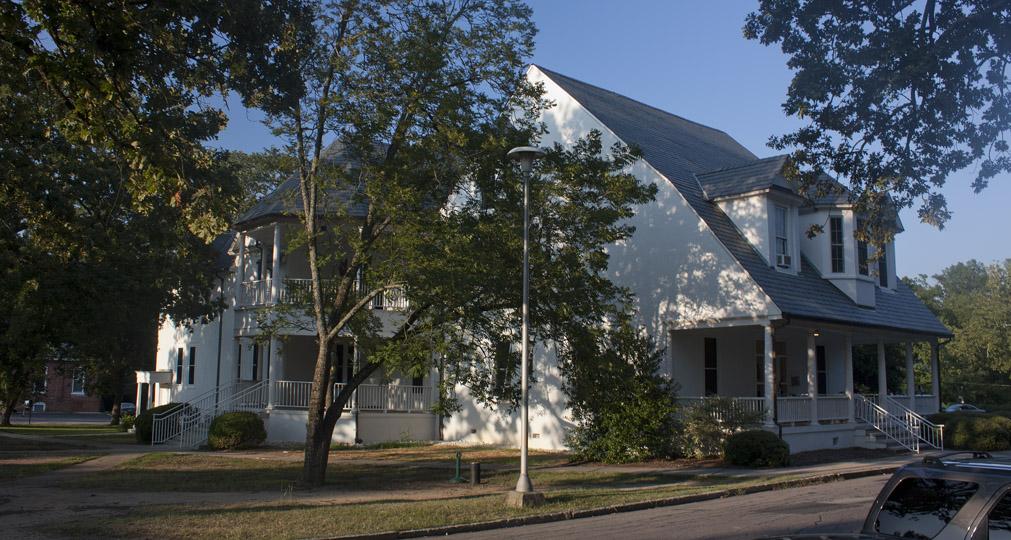 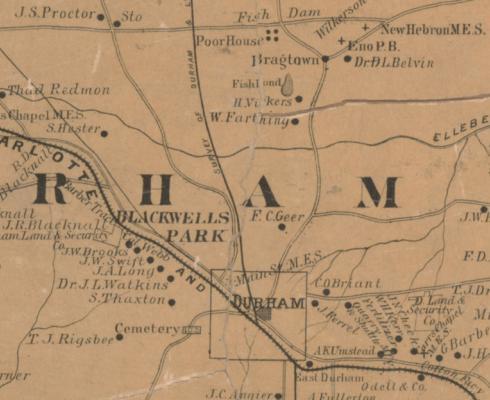 1890 Map showing Blackwell's Park The land that would become the Durham site of Trinity College, later East Campus of Duke University, is first noted in Durham history as a horse racing track and occasional fairgrounds, known as Blackwell's Park. The 67.5 acres was acquired by James W. Blackwell in 1880-1 from Archibald Nichols and developed as a...
Read More
Related Businesses/Organizations