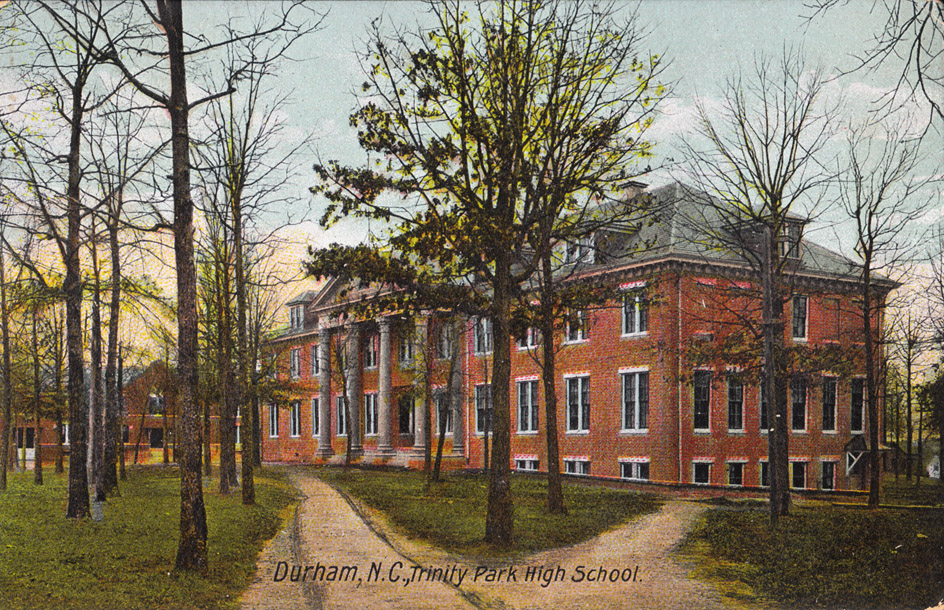 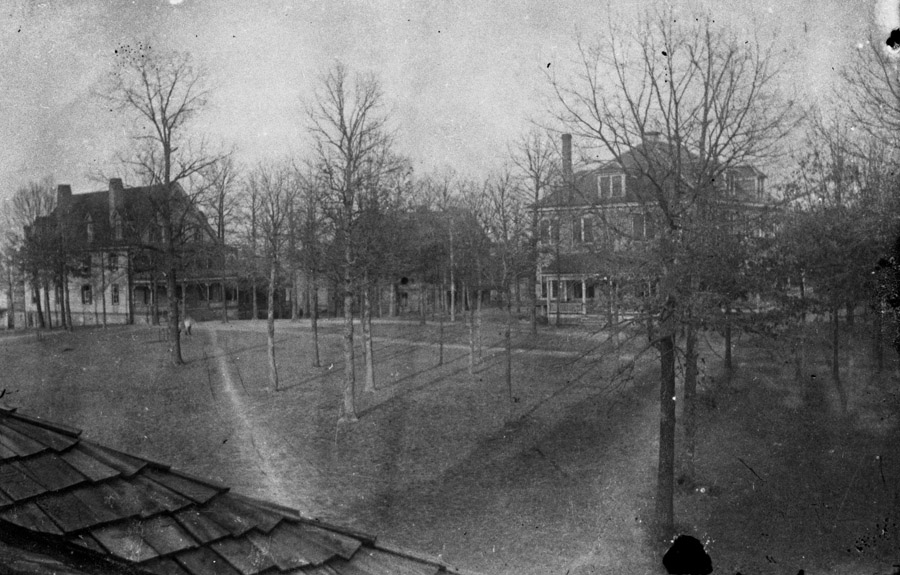 In other posts on this website, I've detailed the slow creation of an adequate school system in Durham, which consisted of a patchwork of private tutors and schools and rural schoolhouses until the creation of the City Graded School in 1884. That large step was to create one public school for the city for all ages.

This is the environment into which Trinity College moved in 1892. As a result, they often found that potential undergraduates from the community were woefully unprepared for college. I suspect that as the college sought to attract professors and their families, the sorry state of Durham's educational system might have been seen as a deterrent as well.

Trinity College's view on these applicants is clear from contemporaneous materials:

"The period of a boy's life between the ages of twelve and eighteen is the most important one in his educational career. In most cases his habits of study and his character itself are fixed at the age of eighteen. If he has had slack preparation and loose discipline, he becomes disheartened, and abandons all hope of entering college and properly fitting himself for life."

"Very many young men apply for entrance to Trinity and are found upon examination unprepared and hence are not admitted. The idea of providing for this class of students at the college and under the immediate direction of the college, originated at the Western North Carolina Conference [of the Methodist Church]."

The Board of Trustees of Trinity College supported this proposal and agreed to oversee the new school, which would be called Trinity Park High School in June of 1898. The first class enrolled in September 1898.

It's unclear where the school operated in its first few months. However, by 1899, at least one building had been constructed: the Asbury Building, which served as the main academic building and chapel. 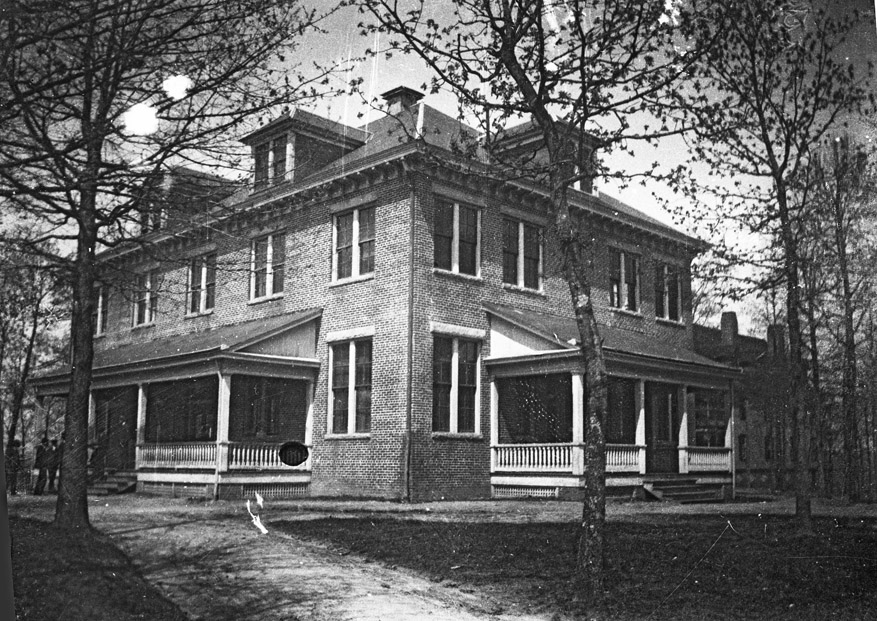 Three additional building were built - perhaps in 1899, but certainly prior to 1902: Lanier Hall and Branson Hall, both dormitories, and York Dining Hall.

In 1905, the Bivins Building was built to provide additional dormitory space. The Duke archives also mention "Harnett and Drummond dormitories", but I don't see these on the Sanborn maps. 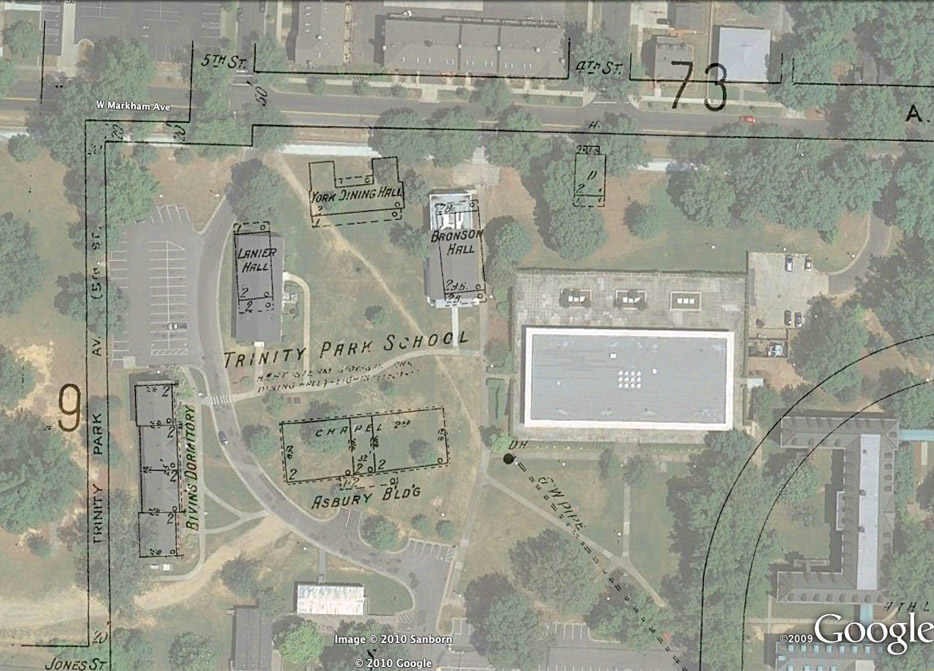 The school was located in the northwest corner of the Trinity College Campus, just to the east of the growing mill village of West Durham. The West Durham street grid extended farther east south of College Road/Markham than it does today.

Sometime between 1907 and 1913, the Asbury Building was significantly expanding, and a large portico was built on the front facade. 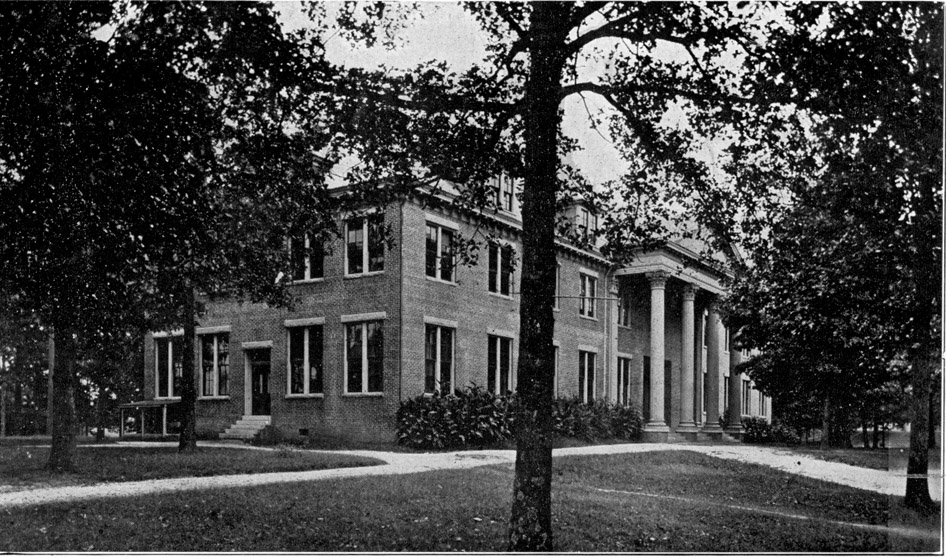 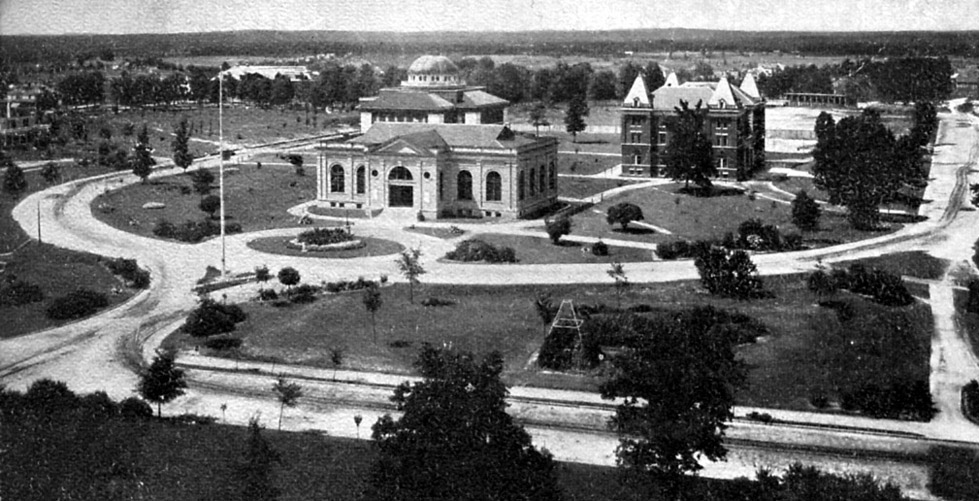 From Trinity College (with Craven Memorial Hall, the library, and Alspaugh dormitory in the foreground), the roof of the Asbury building can be seen in the left background.

Although the school was located on campus, it operated with a fair degree of autonomy - although students had access to Trinity College facilities.

The first headmaster was J. F. Bivins. Per the Duke Archives website:

"The school had a junior class, one or two intermediate classes, and a senior class. Among their required subjects were arithmetic, geography, Latin, English, Greek, algebra, history, and physics. Because the school was located so close to Trinity College, the students were allowed to use the college library and attend lecture courses, as well as have use of the gymnasium. When the school opened in 1898, 71 students were enrolled, including 11 girls. Two students came from Virginia, one from Tennessee, and the rest arrived from points across North Carolina, although most came from the Durham area. According to Earl W. Porter's Trinity and Duke, 1892-1924: Foundations of Duke University, the school quickly became a success, and increased its enrollment and became financially stable within a few years.

Trinity Park School (the name was changed from Trinity Park High School to differentiate it from public schools) was a source of pride--and students--for Trinity College. According to Porter, 'As late as 1907 only eight secondary schools in the Carolinas even offered as much as fourteen units of work'--the minimum required to be considered for admission to Trinity College.

Two major courses of study were offered: the classical and the Latin-scientific. Both courses were quite similar, with classical students required to take several languages and Latin-Scientific required to focus on natural and physical sciences. Students were expected to attend school from approximately 9am to 2 pm, and to study from 7pm to 10pm. Afternoons were reserved for physical activity.

Students were expected to periodically make declamations pertaining to their courses of study. Two organizations, the Grady Literary Society and the Calhoun Literary Society, offered their members the opportunity to practice their declamation and debate skills. An annual competition between these two societies occured each year at commencement, when the top speaker was awarded a medal. Other extra-curricular groups included the Young Men's Christian Association, the Athletic Association, and the Park School Gazette. Mandatory chapel services were held daily. Although Trinity College had a Methodist affiliation, students could select the church of their choice in Durham to attend on Sundays.

Students were expected to behave properly at all times, although 'Foolish and unnecessary rules are avoided; only as such are necessary to the safety, peace, and well-being of the whole community are adopted,' according to the 1904-1905 Trinity Park School catalog. Most students conducted themselves with decorum, but those who 'are addicted to loafing or disorderly behavior at night and who are careless in their study are required to attend the 'Night School' and study under a master's [teacher's] direction.' In rare cases, when warnings and Night School did not achieve their desired effect, a student would be asked to leave Trinity Park School permanently."

Slowly, the school system in Durham improved, with the construction of the city high school in 1905, conversion of the former city graded school into Morehead Elementary, and the establishment of multiple city graded schools in neighborhoods outside of the core of Durham, such as Edgemont School, the Fuller School, North Durham School, West Durham Graded School and East Durham Graded School.

As the local schools, and schools throughout North Carolina and the south improved, enrollment at Trinity Park School waned. In summer 1922, the Board of Trustees decided to close the School, and use the buildings and space for the growing undergraduate class of Trinity College.

Despite the need for additional space, the buildings of Trinity Park School began to incrementally disappear. York Dining Hall was torn down in 1928. Per the archives "the Harnett and Drummond buildings, both dormitories, were destroyed by fire in 1928 and 1932, respectively."

In 1930, the former Trinity College Campus officially became East Campus of Duke University, home of the Women's College. The former Trinity Park School was used for the engineering department of Duke, however, which was dominated by men. Men in the Engineering School initially were housed in Southgate Dormitory, but this soon reverted to a female dormitory.

Branson Hall was replaced in 1935 with a new Branson Hall, which evidently used some of the materials from the original building. It was remodeled in the 1950s. In 1951, the Engineering School moved to Science Drive off of West Campus, and the Trinity Park School buildings became part of the Women's College. 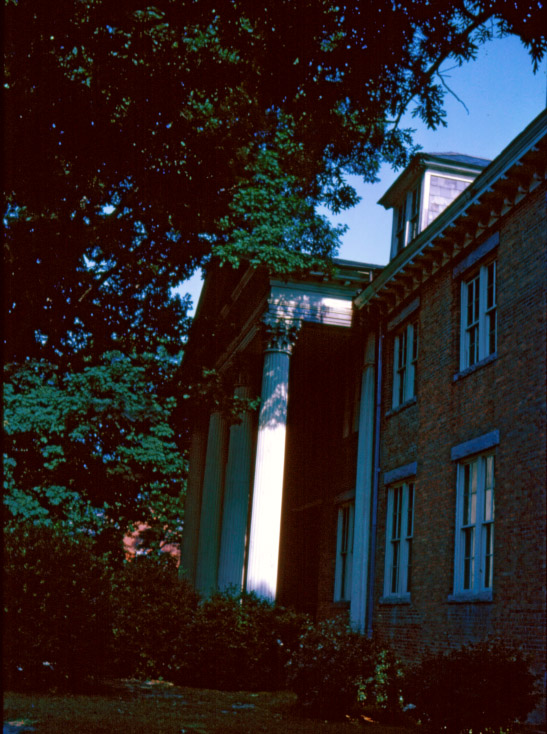 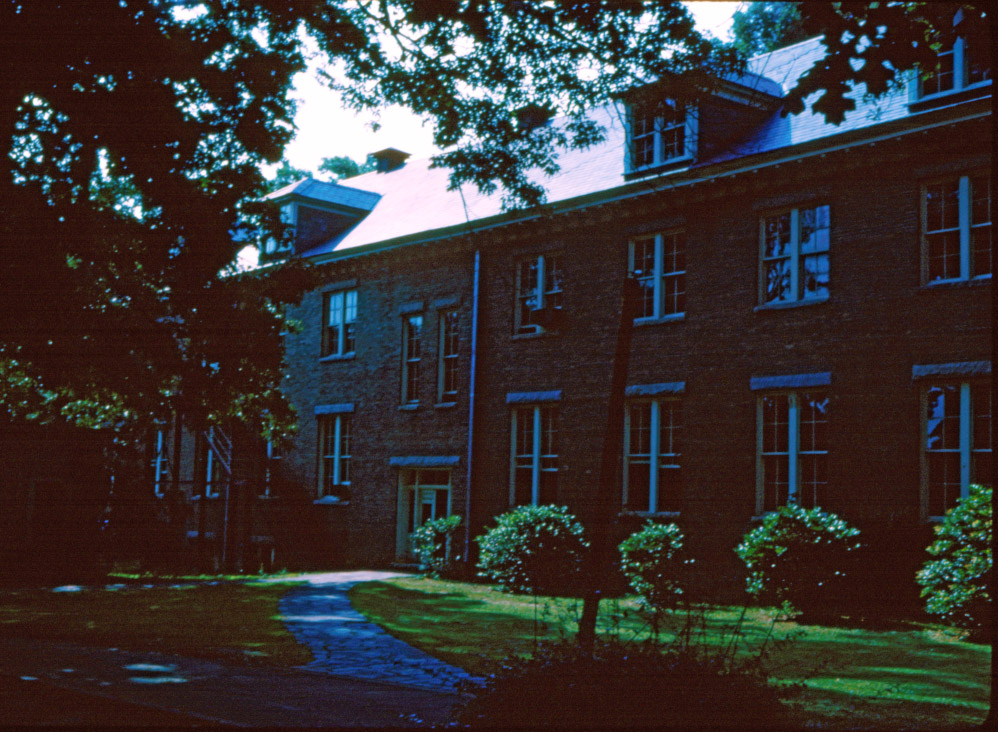 After both East and West Campuses became co-educational in 1972, the single engineering school became the one located off of West Campus on Science Drive. The former main building of Trinity Park School, the Asbury Building, was unfortunately destroyed in 1974 during construction of the Mary Duke Biddle music building.

Today, only Bivins hall remains standing from the original school - it has been used as a college dormitory, then the headquarters of the Departments of Botany, Zoology, and Civil Engineering, and later, home of the Duke School for Children. Today the Bivins Building houses several arts departments, as well as WXDU radio. 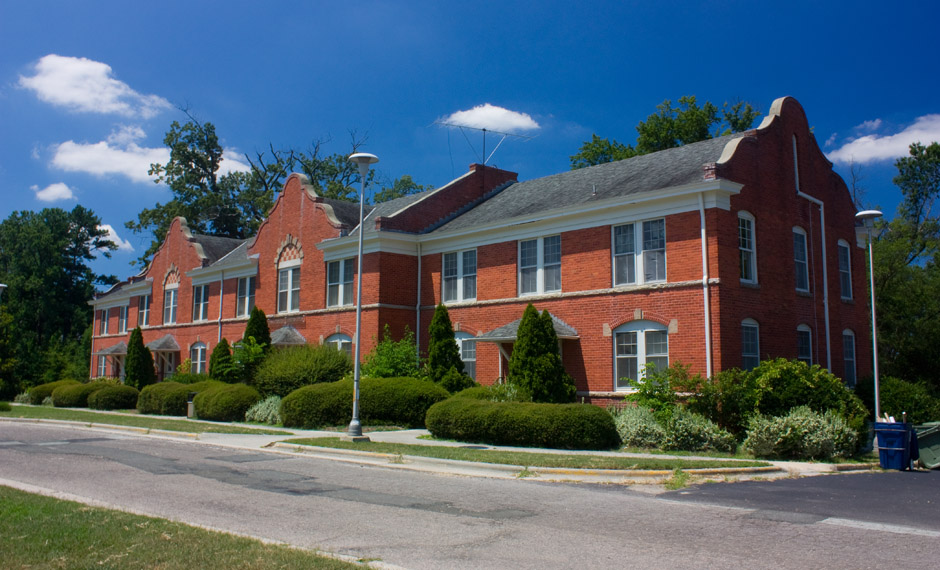 Hey! Someone in my Facebook group shared this site with us so I came to check it out.

I'm definitely loving the information. I'm bookmarking and will be tweeting this to my followers! Wonderful blog and outstanding design and style.

I graduated from Duke,

I graduated from Duke, Trinity '60. All of my art courses (I was an art major) were in Asbury building. I am sorry to see that my mini alma mater building is no longer standing but the great strides that Duke has made in the Art curriculum more than compensate.