A narrow, vehicular bridge that connected the neighborhoods of Southside/St. Theresa's and Forest Hills from 1956 to 2009. 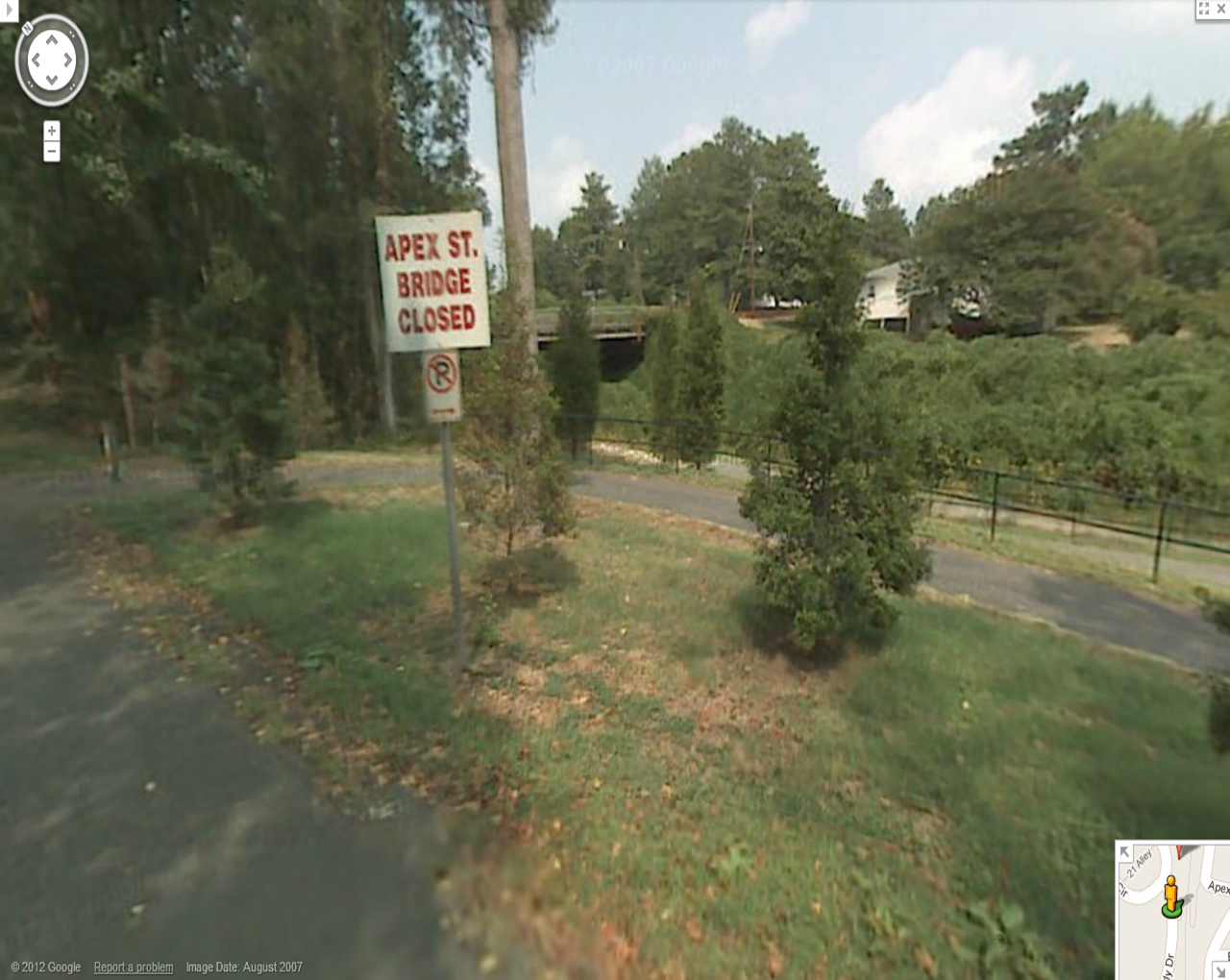 Sheleia Brown, a staff writer for the NC Central Echo newspaper, wrote this about the Apex Street Bridge in an October 11, 2006 article entitled "Bridging the Gap":

The Apex Street Bridge that lies blocks away from N.C. Central University is not just an ordinary bridge.

To many, it's a historic monument that is irreplaceable.

Twenty-four years later, the American Tobacco Company constructed and reformed the bridge, making it the City of Durham's property.

Built by the American Tobacco Company, the Apex Street Bridge enabled commuters to bypass nearby Enterprise Street.  Long trains on their way to and from American Tobacco would idle on the single-lane track and block the at-grade crossing of Enterprise Street.  Though such train traffic ended sometime around the 1980s, by the turn of the 21st century several hundred cars a day still traversed the Apex Street Bridge.

The City closed the bridge to vehicular traffic in May 2001 because of concerns about its structural integrity.  While City officials debated for years whether to replace it, stabilize it, or demolish it, the bridge remained open to bicyclists and pedestrians travelling between the Southside/St.Therea's and Forest Hills neighborhoods.  Meanwhile, the American Tobacco Trail took shape from the rail corridor that extended beneath the Apex Street Bridge.  A NCDOT-funded rails-to-trails program converted 3.2 miles of former rail line from Morehead Avenue to Cornwallis Road and opened for use on June 3, 2000.

By September 2006, City Council had decided to demolish the bridge and to build pedestrian ramps from the streets abutting the bridge to the trail.  A ramp to Beverly Drive (on the west side) was constructed first in 2008, at a cost of $152,000.  In 2009, a ramp to Fargo Street (on the east side) was constructed and the bridge finally dismantled.  The decision to close the bridge to vehicular traffic - and then to demolish it altogether - was contentious and inspired many news stories and letters to the editor, both for and against.  Some saw racism and economic segregation in the choices and in the symbolic destruction of a literal bridge separating the nearly exclusively white, affluent neighborhood of Forest Hills and the predominately Black, impoverished neighborhoods of Southside and St. Theresa's.  Others believed that issues of safety (from a failing bridge, from 400 additional cars on the roadway) were paramount.

During that year Carol Thomson, a Durham-based multimedia producer and videographer, created a seven-minute documentary about the bridge to accompany a website she built to explore the history and stories of the entire length of the Amrican Tobacco Trail.  Unfortunately, the website - entitled Bridging Rails to Trails - was constructed on Adobe Flash technology, which is no longer supported any modern web browser. You can still access the website's blog, however.

Robby Poore, whose immediate family and grandparents briefly lived in two houses along nearby Carolina Circle, is the subject in several late 1960s photographs that show the bridge.  The bridge can be seen in the distance in one shot from 1967; close-ups of Robby on the bridge in 1968 also reveal the single-track rail corridor that travelled under the bridge before the American Tobacco Trail. (It appears that kudzu has been crawling the hillsides in this stretch of the trail for decades.) 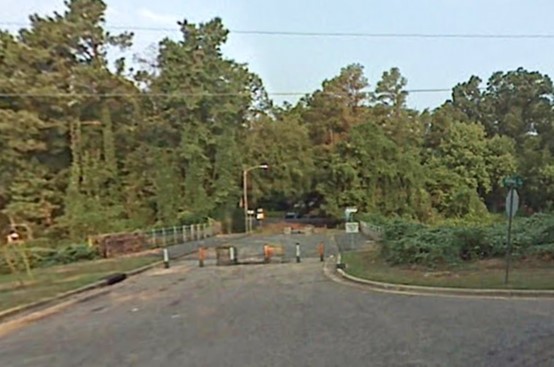 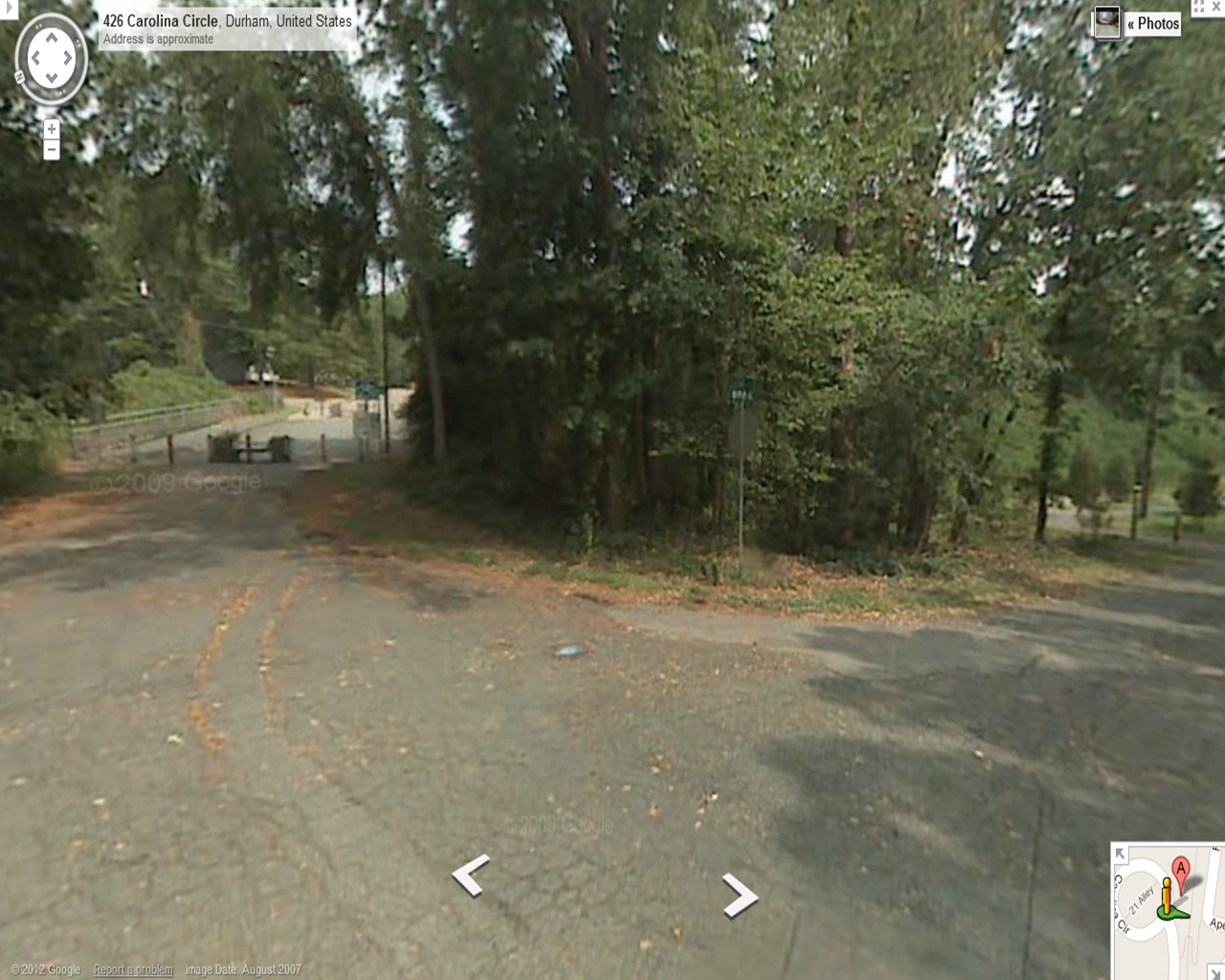 Looking north along the American Tobacco Trail, 1/2021.  The Apex Street Bridge stood about 50 feet further north from ramp entrances seen in the middle edges of the image. 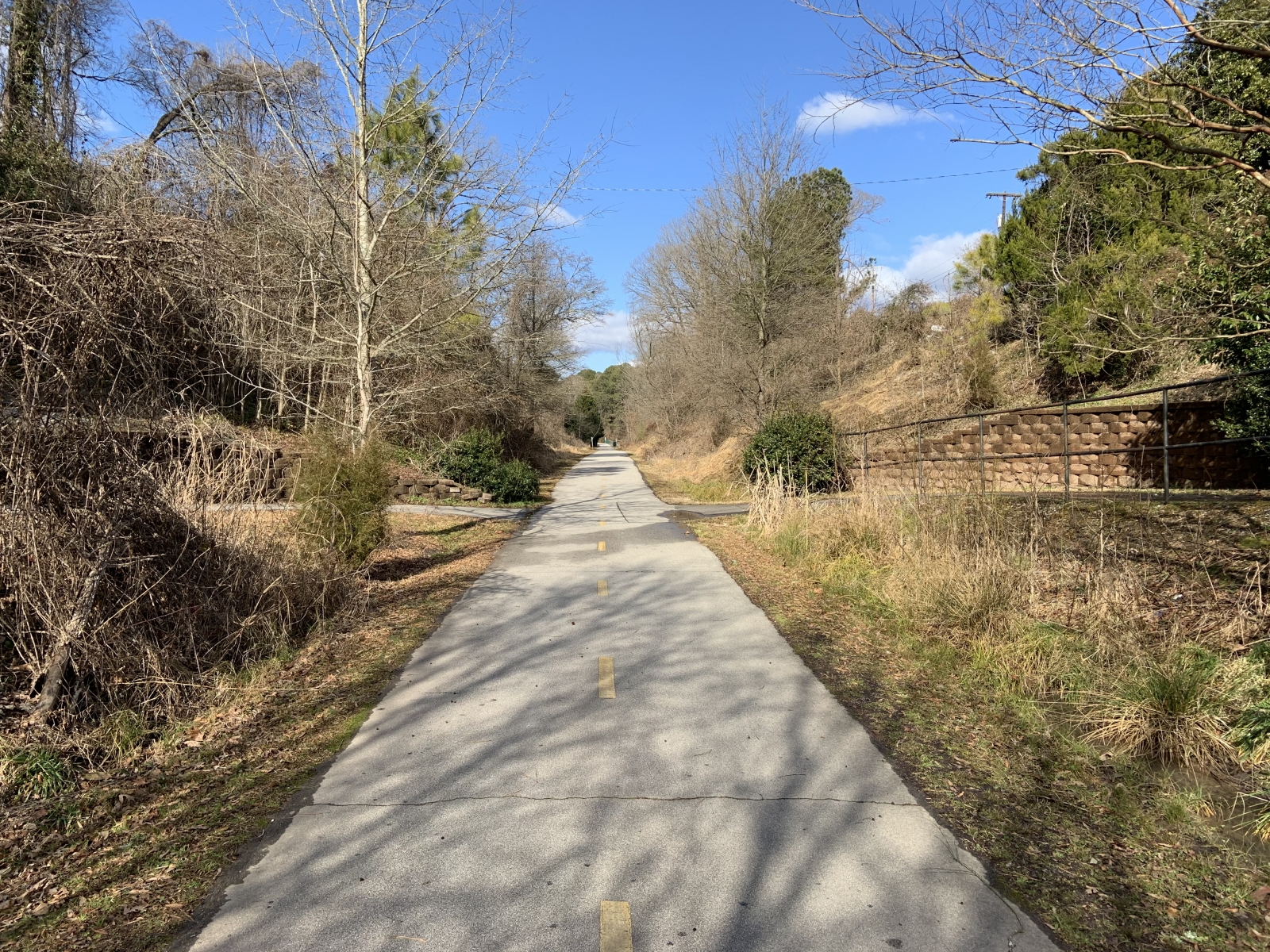