The 800 block of North Mangum Street, between Little Five Points and the renovated houses north of Geer Street, continues to experience significant transition. The busy intersection of Geer St. and Mangum St., with a large auto repair shop, forms a significant barrier between sections of the neighborhood. The 800 block retains more houses than the area of Mangum St. south of Little Five Points, but the area is not stable. 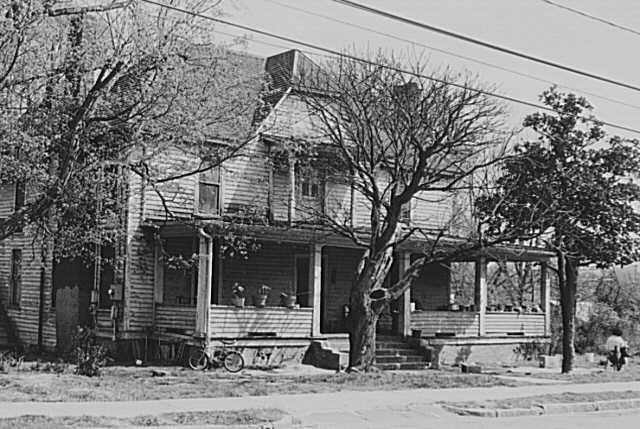 Suburban-style cul-de-sac development has taken the place of the Mangum-facing housing, including 822 N. Mangum

The changes in the 800 block of N. Mangum have removed life from the street. This is why I really dislike the cul-de-sac development above. Unfortunately, my dislike might be construed as a dislike of affordable housing; nothing could be further from the truth. My dislike comes from the fact that this development turns its back to the the street, and puts up a long, unbroken fence to treat the street as something untouchable. Unfortunately, this view was encouraged by the decision to turn Mangum Street into a two-lane one-way southbound highway in the 1960s. The street actually becomes less safe, less appealing, and the cars drive faster with this type of development along the 'roadside'.

Unfortunately, although the 800 block of North Mangum is a part of the Old North Durham National Register Historic District, this provides no protection for the properties in the district, or oversight to be sure that the design of new construction is compatible with the historic architecture (it only allows tax breaks on renovation). Only certification as a Local Historic District provides oversight by the Historic Preservation Commission. The neighborhood certainly has the ability to seek Local Historic District protection, but they have chosen not to. This can occur, as it has in Trinity Park, where homeowners are afraid that the HPC might prevent them from altering the front of their house in a historically-inappropriate way. Maintaining this perogative comes at the expense of transitional areas of the neigbhborhood, such as the 800 block of N Mangum, and ultimately, of the entire neighborhood.

you are very talented with

you are very talented with piecing together your pictures for a wide angle view! do many houses have only one sidelight like the mangum 824 house? was this single family?
what do you attribute the clipping of the gable to on 822 mangum? is this a design or functional or both feature?
The cul de sac is reminiscent of the new building down by forest hills, across from Galaxy. They round out their little site and keep out the evils by showing their behinds instead of inviting front doors.

cul de sac reminds me of new development across st from Galaxy by forest hills...they section off their area by showing everyone else their backsides.
why do you think the gable was clipped? function or form?
is the church from wake forest expanding here? do we really need more churches?
i can't recall my username/pswd right now...coco

No talent involved; just computer magic. There are houses around with the single sidelight - it does seem to be a recurring theme in these pictures. I think the 'clipped gable' is purely an aesthetic feature; I can't imagine a functional use for it.

I don't know about the church expansion. It may be a church that is already in the neighborhood somewhere, but the ownership is in Wake Forest.

The "clipped gable" is also

The link above says that sort of gable is characeristic of Stick style houses, but I can't find any such indication in my copy of A Field Guide to American Houses (BTW, anyone with any interest in house styles would love the above book; there are even some Durham examples in it, which is kinda cool). The house Sven shows with the feature doesn't look like a Stick-style house, either, but I guess that doesn't necessarily mean much.

Anyway, the hipped gable (IMO) looks like some sort of medieval holdover to me, like the rolled edges one sees on some roofs being a holdover from when roofs were sod? I'm just speculating, of course. I'm not an architect, nor do I play one on TV. :)

Thanks Joe, for the info.

Thanks Joe, for the info. I've definitely never heard the term 'jerkinhead'. Sounds sort of like an insult.

I do think the hipped roof motif is reminiscent of a medieval/thatched roof. Looking at some examples on the website you linked make it seem less odd; I guess the rest of the house is so classically North Carolina that this alteration seems to really stand out.

WRT "Historic District protection": It seems to cut both ways. In Watts-Hillandale, some people did as much renovation as possible before the H.D. protection came about. And some people wanted the H.D. protection mainly so (I'm told) the city couldn't do anything to Club Blvd., like make it four lanes or the like. Basically I got the impression (like with Trinity Park) that many of the homeowners were acting like spoiled brats and using the presence or absence of the H.D. protection simply to further their own aims and increase their own property values; it didn't seem to have much to do with historic preservation. I think the person who put the colored bathtubs in their front yard on Club Blvd. is a hero. ;) By the way, I've lived in both neighborhoods (on Watts St. and Club Blvd., to be precise), and I know most the vast majority of residents of both neighborhoods aren't spoiled brats. :)

i have always felt that the

i have always felt that the house with the windows removed looked like it was blind. it always makes me sad for it.

It is really odd; I try to

It is really odd; I try to think of what reasons motivate people to remove all the windows from a house - it becomes easy to ponder the most bizarre of reasons.

It's the perfect emblem to me of what happens when you don't have, as Jane Jacobs put it, 'eyes on the street'.

Hi there, I am a neighbor of

Hi there, I am a neighbor of the "Blind House" and have been told that the windows were covered over it to make it more secure. Apparently it is used as a storage area... although I must admit I have no first hand knowledge of this. Although I agree that its appearances could greatly be improved upon, I am thankful that someone went to the trouble to make this house usable and that the owners maintain it. It is still there, its neighbors aren’t. CM

Thanks for your comment. I agree that it is good that the house is still there, even with the windows removed. But it does have the effect that you describe as the motivation - the same 'bunker' effect conveyed by the cul-de-sacs. But hopefully someday the windows will be put back.

Thanks for stopping by!