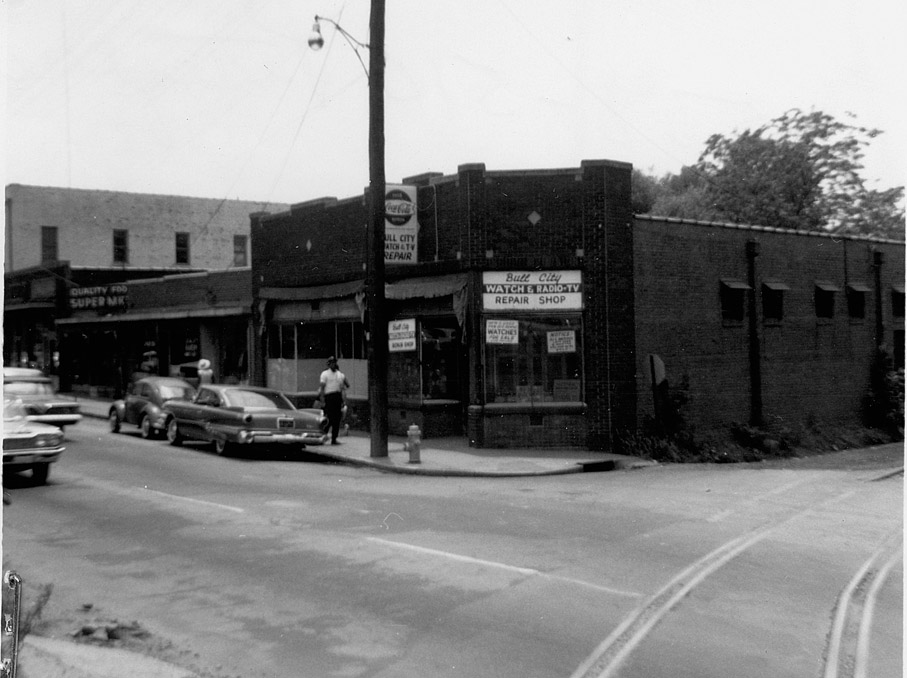 506 and 508 appear to have been consolidated as Albert Rosenberg's meat market by 1941. 510 housed Progressive Stores, a grocer. In 1947, Progressive was replaced by the Grace 5 and 10 cents store. In 1958, Rosenberg's became the Riteway food center, Midway Dressmakers/Durham Laundry in 1959, and in 1961, Bull City Watch. 510 briefly held American Photographic Services in 1968, and then remained vacant. Bull City Watch remained in 508 until the building was demolished in 1977. 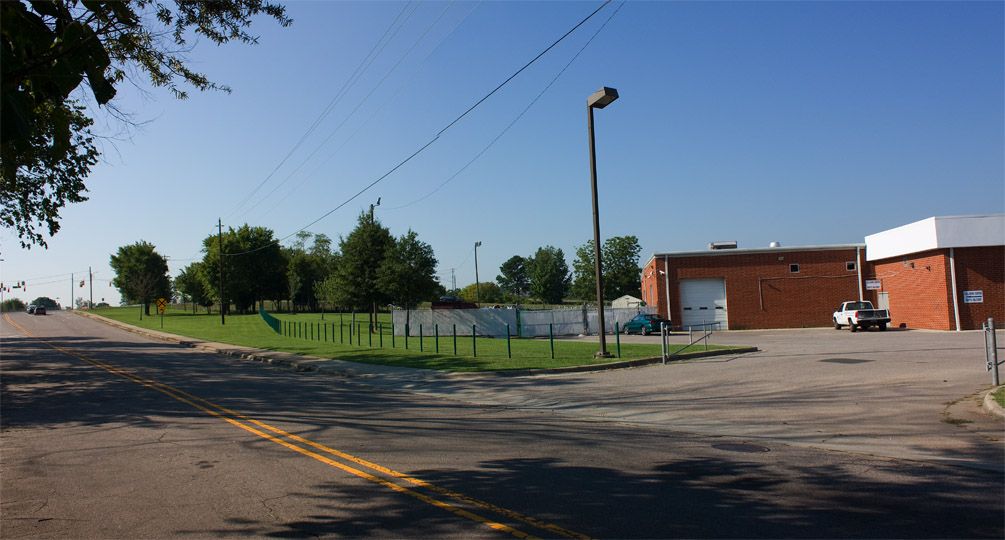 Show this location on a Google Map

Argh. This is getting

Argh. This is getting depressing. Post after post of buildings that were torn down by "urban renewal" and replaced by... nothing. Sorry Gary, I know it's not your fault, and this deserves to be documented.

But it's enough to make me wonder. I didn't entirely buy the claim in Lewis Shiner's Black and White that urban renewal was intended by some to destroy Hayti and salt the earth so that it couldn't be brought back, as some kind of misguided revenge for the civil rights movement. But if you look at the bare facts of what was done by urban renewal, without being aware of the complex and messy history behind it, you could certainly come to a conclusion like that.

Personally, I lean towards the "well-intended but misguided" theory of urban renewal. I just hope that the history covered in this blog is enough to prevent some of our current well-intentioned leaders from making the same misguided mistakes again. I really, really don't want you to be blogging thirty years from now about the development blunders of the first decade of the 21st century.

It's going to be a depressing

It's going to be a depressing couple of months.

I didn't read Shiner's book, although many have recommended it to me, so I can't comment on it directly. I'm sure there were people that really wanted to destroy Hayti permanently out of spite/racism, but mostly I think it was not all that different than today. There are and were places that were viewed as valueless because they were old and decrepit - for some people, this lack of value was compounded by race. But the lack of value ascribed to the places was held by many in the African-American community as well, who were thrilled with the notion that 'old Hayti' would be replaced with new housing and a big shopping center.

Where things really fell apart in the grand plan was when the promised shiny new facilities never came. To a great extent, I think this was a fundamental misreading of city dynamics, and a mistake that we continue to make. We, as they, expect that if all of the 'blight' is cleared away, private investors are going to jump at the chance to build something on the nicely cleared land. It must be the 'blight' that is preventing all the shiny development from coming to the neighborhood.

Of course, it doesn't work that way, and it wasn't the 'blight' that was keeping the private investment out. Nor was it the lack of giant parcels on which to build great masses of parking. It was the flight of wealth - both African-American and white - from the inner city. Many good intentioned folks believed that remaking the inner city in the image of the suburbs would bring folks back, but it didn't work. So the pretty renderings of Hayti-as-suburbia came to be seen as a lie. And they were a lie. The notion that the proponents of urban renewal would create a fake 1970 newscast in 1962 to show the pride the city had in a completed Durham Freeway, a new Hayti Shopping Center, and a "man on the moon" would be laughable if it weren't so inappropriate.

But it isn't as if folks don't do the same b.s. today, as NCDOT talks about the economic benefits of widened Alston Ave., or the county talks about how a new Human Services Complex will really improve the east side of downtown. History shows that these things aren't true, but that doesn't mean the proponents don't actually believe them.

Urban renewal is working (after a great deal of time) in cities like Pittsburgh, St. Louis and even New York City if you recall how seedy Times Square was 40 years ago. However large parts of say St.Louis, are still blighted and have bleak hopes of coming back. The downtown area has a much better prognosis.

However, Durham is NOT one of those cities: ineffective planning, flight to the burbs as Gary points out, and an economic base much weaker than the cities noted above. Sad for Durham, but the motto, "Scrape it and they will come" does not apply there.

AnonI agree with your overall

I agree with your overall point, although I wouldn't term that 'working'. My contention for Durham, and for other cities, is that urban renewal delayed rejuvenation. The ability of a small entrepreneur to purchase one (small) old historic building and renovate it, and then another, and then another is what we lost. When you create a huge swath of land that requires new construction, only a private real estate developer is going to come in and do something with that. And for that to happen, the (local) economy and national economy has to be good, and, up until the last 10 years or so, developers gravitated towards low cost/high profit car-centric gimmes like fast food, drive-through pharmacies, self-storage facilities, etc.

Since the 1960s-1970s, we've had such a small supply of small, historic, commercial buildings that 1) it's been easy for single owners to control the fate of a historic area, and 2)because the supply is so limited, owners that sit on buildings waiting for a pay day can dominate the market.

My ongoing contention is that, if Durham had avoided urban renewal altogether - or simply used it as originally intended - to demolish and rebuild the worst-of-the-worst housing - it would have seen a revitalization occur rapidly when it began to in other cities - the mid-1990s. We have so many gaps and swaths of emptiness that it will require large-scale infill projects to make things whole again. And with the economic news lately, that is hardly a sure thing.