406
Formosa Avenue
Durham
NC
Year built
1931
Architectural style
Tudor Revival
Construction type
Frame
Stucco
Neighborhood
College Heights
Use
Residence
Building Type
Residential
Can you help?
You don't need to know everything, but do you know the architect?
Log in or register and you can edit this. 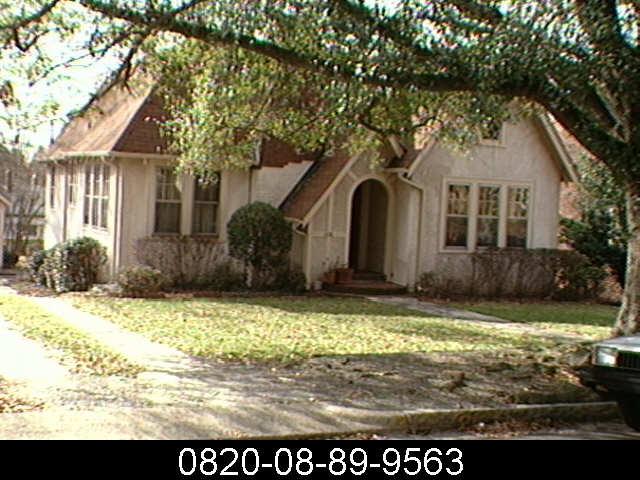 A house-plan book of the late 1920s would surely have described the Alfonso Elder house as "A Bungalow of English Inheritance." Indeed, the design of this well-built, nicely-detailed house appears to be influenced by the book "Small Homes of Architectural Distinction, published by the ARchitect's Small House Service Bureau in 1929. The Bureau, a joint creation of the American Institute of Architects and the US department of Commerce, worked all through the 1920s and 30s to provide inexpensive and imaginative house plans during the prosperous years following World War I. Two and three bedroom bungalow plans were turned out in a variety of styles including Craftsman, Colonial, Tudor, and Spanish. These designs helped shape the appearance of neighborhoods across the country at the dawn of the motor-car era.

Alfonso Elder was Dean of the still new North Carolina College for Negroes when he had this house built in 1931. The location was ideal - Dean Elder could walk to work and the neighborhood was home to Durham's most prominent African-American families. The Elders would have the Michauxs as their neighbors on one side and the Kennedys on the other.

The house itself is a compact but finely detailed expression of the Tudor Revival style. The facade is asymmetrical. The steeply pitched and complicated roof is typical of the Tudor style. Also typical are the prominent cross gable with the slipped or 'jerkinheaded' peak., decorative half-timbering, stucco wall finish, and tall windows arranged in multiple groups.

In Tudor houses, chimneys are often the focal points of architectural display and the Elder House is no exception. Although the chimney might have suited the interior arrangement of the living room better had it been placed on the end gable, it has been pulled around to the front of the house and joined with the complicated entry alcove. The chimney's design is fanciful - it is tapered steeply to echo the steep rooflines in the gables. The irregular union of the brick and stucco portions of the chimney are meant to suggest the rough building techniques of late Medieval England. The effect is heightened by the brick 'rubble' protruding from the stucco at eye level on the base of the chimney.

Originally, the interior was divided into spacious living and dining rooms, two bedrooms, and a single bath. Later, this bungalow layout was modified with the addition of a large master bedroom and sunroom on the rear of the house. One of the original bedrooms was redesigned and became a second bath, larger closets, and a small office.

Dean Elder ultimately became President of North Carolina Central University. During the 1950s, he promoted the school's collection and display of African and African-American art. The Elders resided in the Shepard House while he served as president and rented their house to another professor. Upon his retirement, they returned to their newly expanded and remodeled home. Louise Elder remained there after her husband's death until 1989, when she sold the house to Jackie WIlliams, who remains the owner as of 2011. Ms. Williams grew up in the neighborhood and has an biding interest in preservation.