United Dollar Stores Company was started by Eli and Jenny Nachamson after they moved from Kinston to Durham in 1921 - the Nachamson family had evidently been successful retailers in the eastern part of North Carolina for at least a generation prior to their move, though I have no details. The United Dollar Store first appears in the city directories at 319-321 West Main in 1923. Their daughter Sara attended Duke University during the late 1920s, and began to manage the store when her father fell ill.

In January 1928, she married Emmanuel J. ("Mutt") Evans, who had come to UNC from Fayetteville, at the Washington Duke Hotel - the couple became the sole owners and proprietors of the store in 1929, and the buildings at 322-328 West Main were built by the late 1920s, taking the place of earlier frame structures. At some point thereafter, it became known as "Evans United Dollar Store" 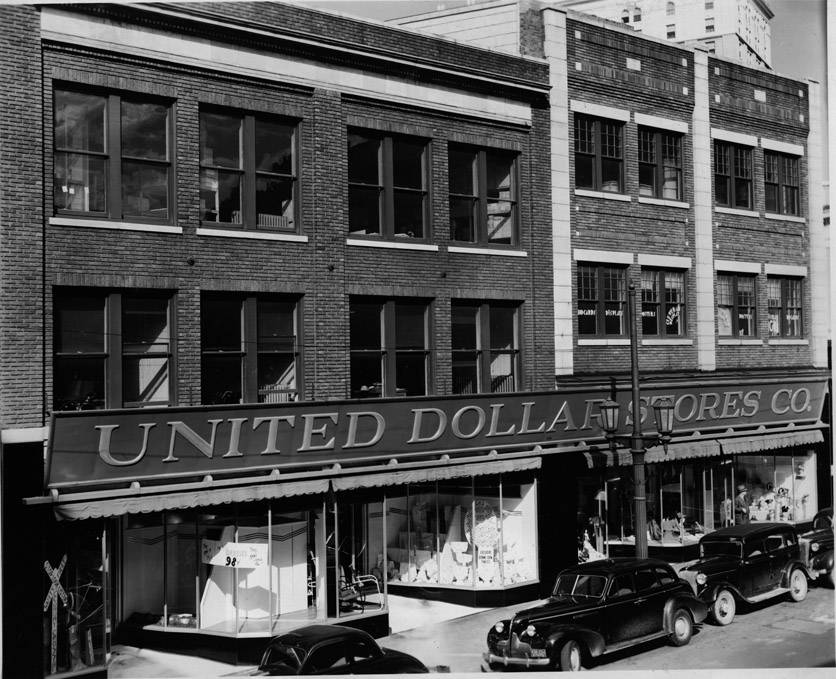 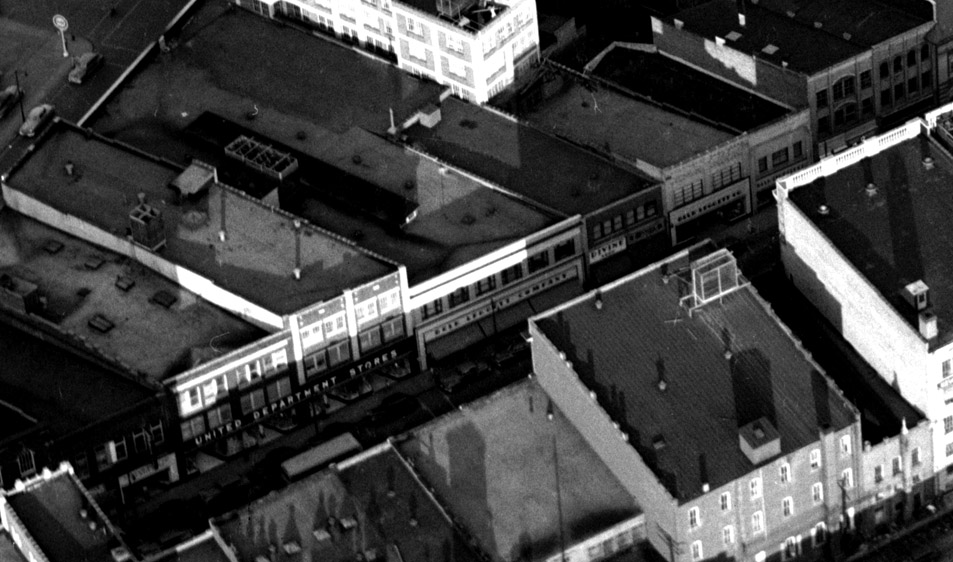 Aerial showing the United and Belk facades along the north side of the 300 block of West Main St., late 1940s.
(Courtesy Herald-Sun)

In the 1950s, 'Mutt' Evans became mayor of Durham and served for six terms, holding together a diverse coalition of interests. United had been notable as one of the very few white-owned establishments that served African-Americans and had an integrated lunch counter. (There is an interesting anecdote in the excellent "The Provincials," written by Evans' son Eli, about how a judge told Evans that he would need to segregate the lunch counter; Evan refused, telling the judge (Bus Borland,) "Bus, you'll have to close the store if you want me to do that." Evans counsel discovered that the legal precedent had only included seated counters - so Evans raised the entire counter to elbow height and took out to stools, arguing that the case law didn't apply to standing counters. The judge agreed.) 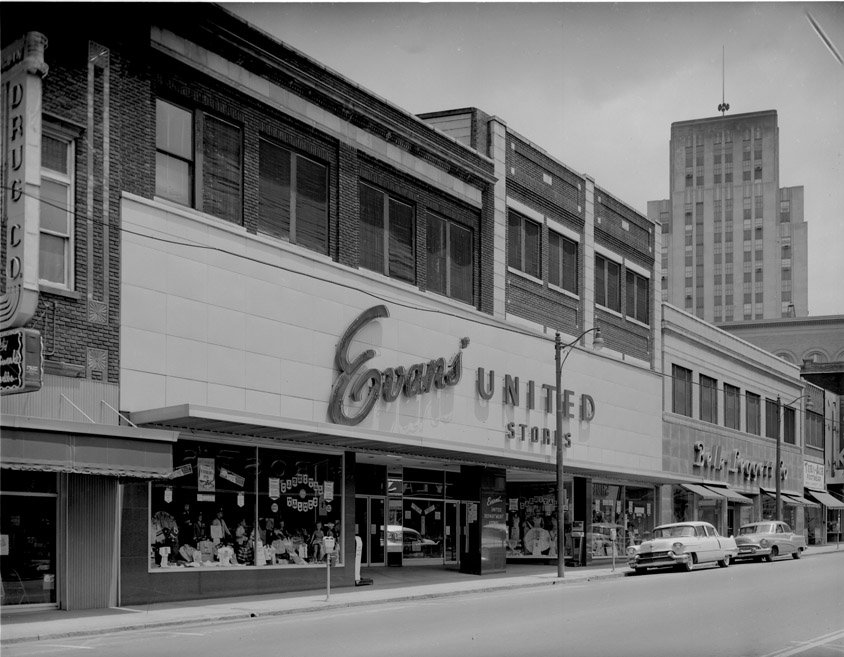 In the early 1960s, it became clear that neither of the Evans children were going to take over the family business, and Sara and Mutt sold the business to Belk, which expanded into the former United buildings. In bricking up the windows and covering the facades, they managed to make 326-328 partly collapse. 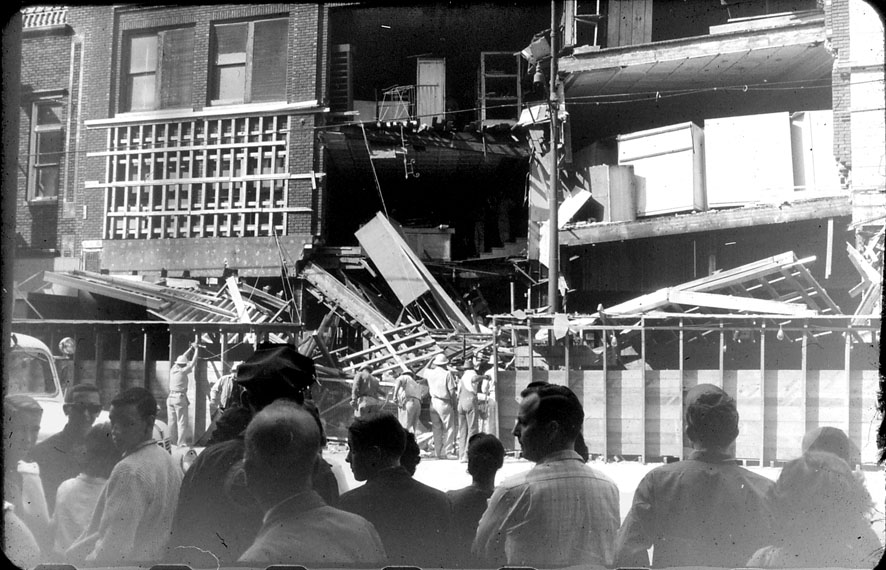 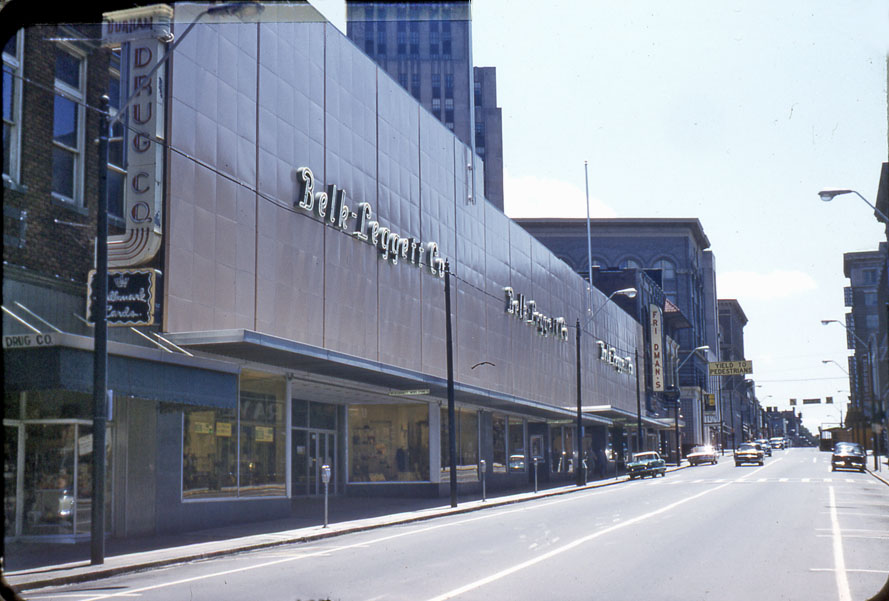 Belk lasted longer than most of the other department stores downtown. But eventually, the lure of the mall was too much, and in 1975, Belk departed for the now-departed South Square. After attempts to sell the building (and attempts to find a 'shopping center' tenant to turn it into a "minimall" by the Zuchelli, Hunter and Assoc. consulting firm, hired by Nello Teer to "try to bring something back to downtown") the owners prepared to demolish the buildings. John Flowers, president of the Historic Preservation Society, said that the historic society had no interest in the future of the building, according to contemporaneous Herald-Sun article - that this group of buildings "[was] not a great piece of architecture." There was a great deal of conviction that the vacant lot would be more appealing for future development than the buildings. 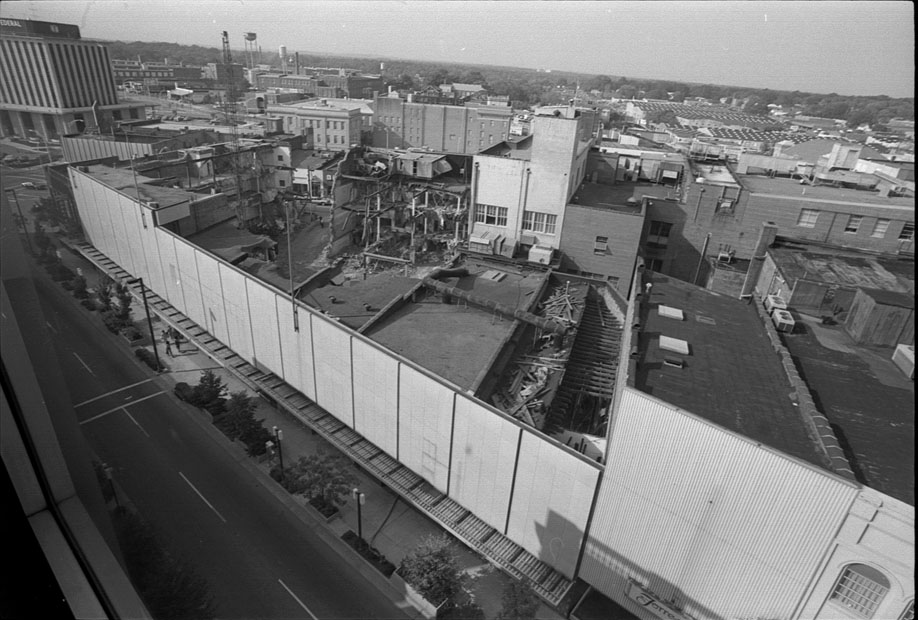 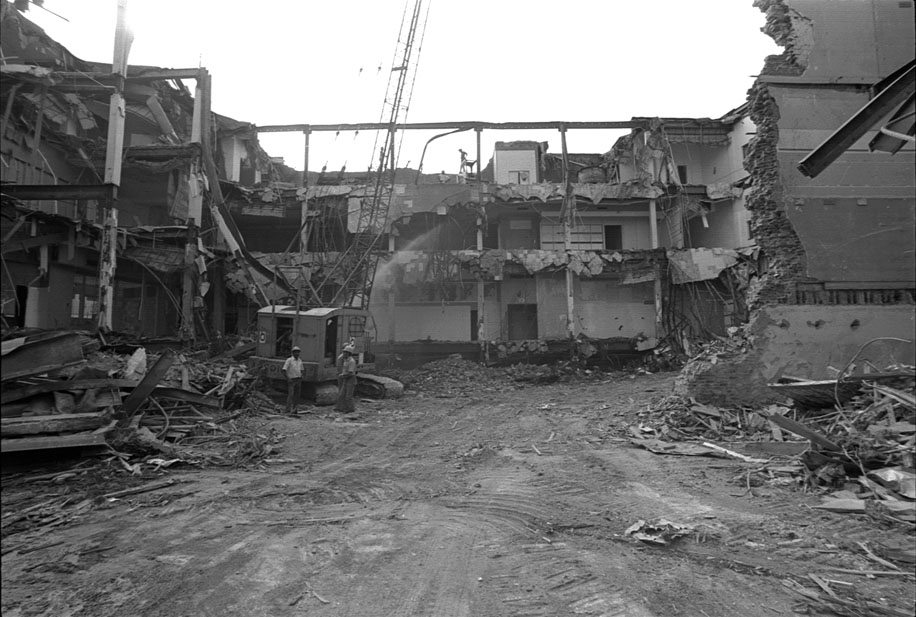 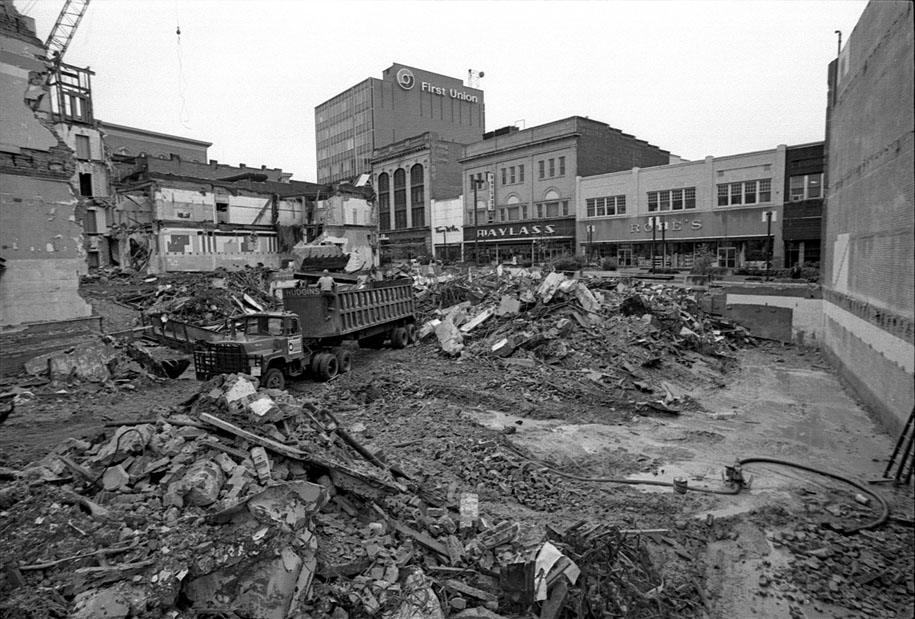 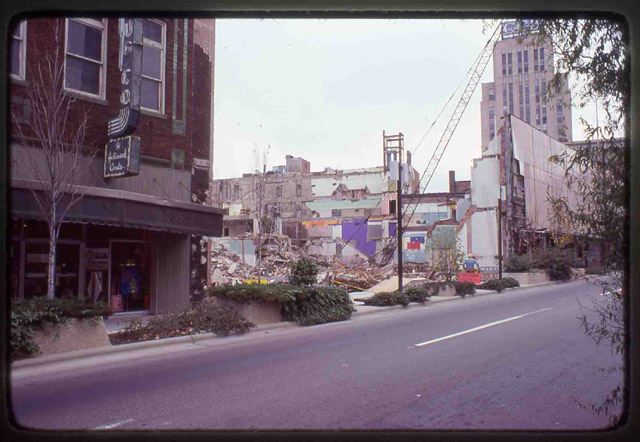 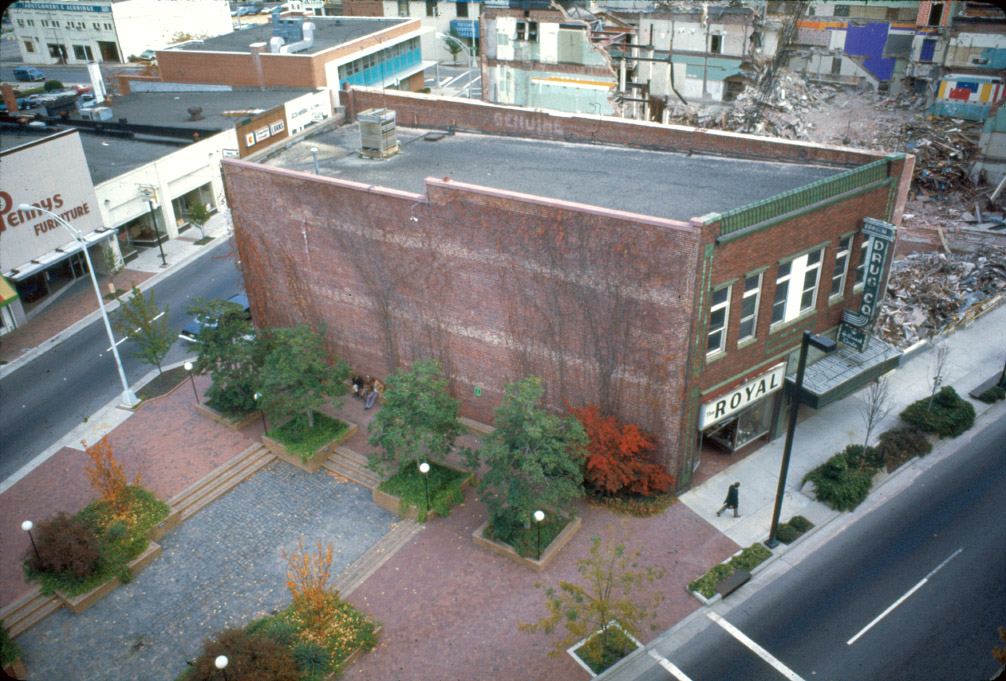 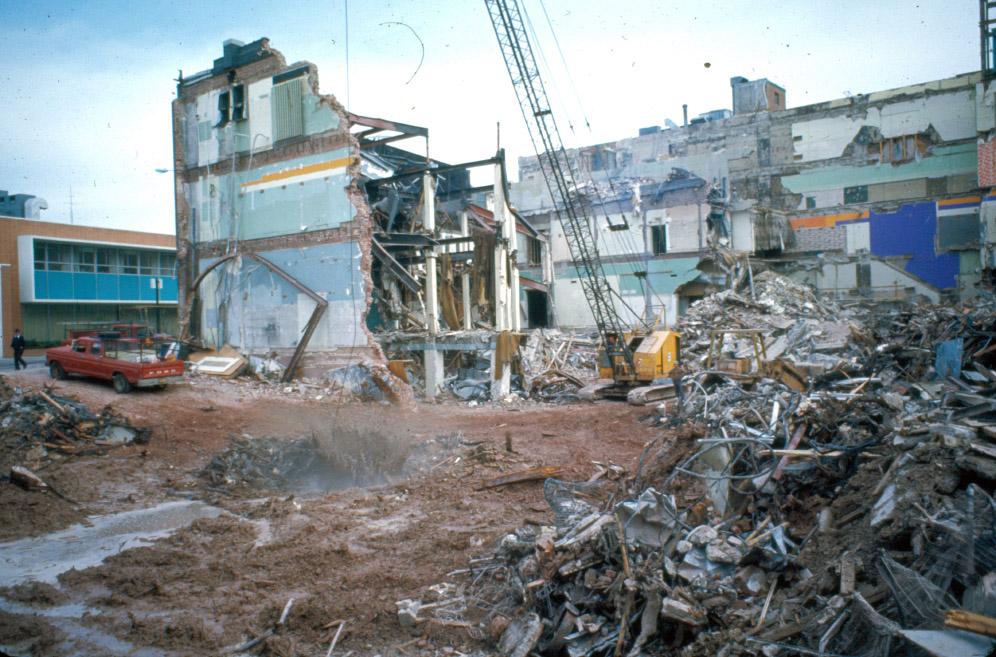 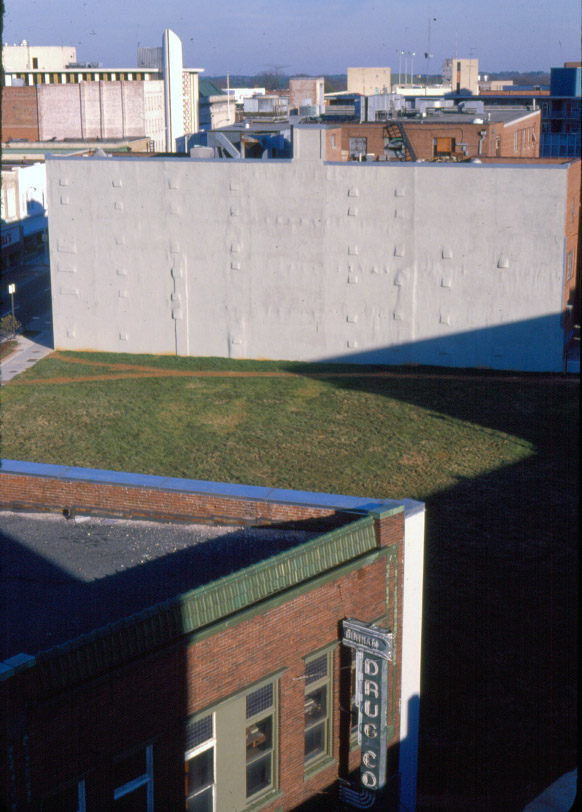 The development never came - as was the case with any number of 'speculative demolitions' downtown. This space became surface parking, for the barely-used addition to the Herald-Sun, which it remains. 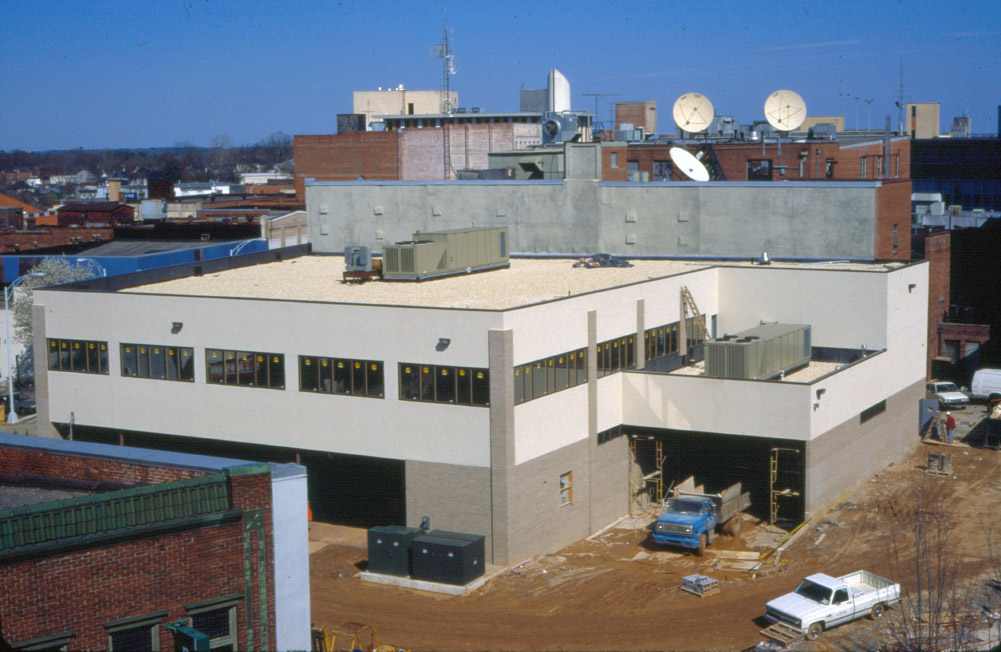 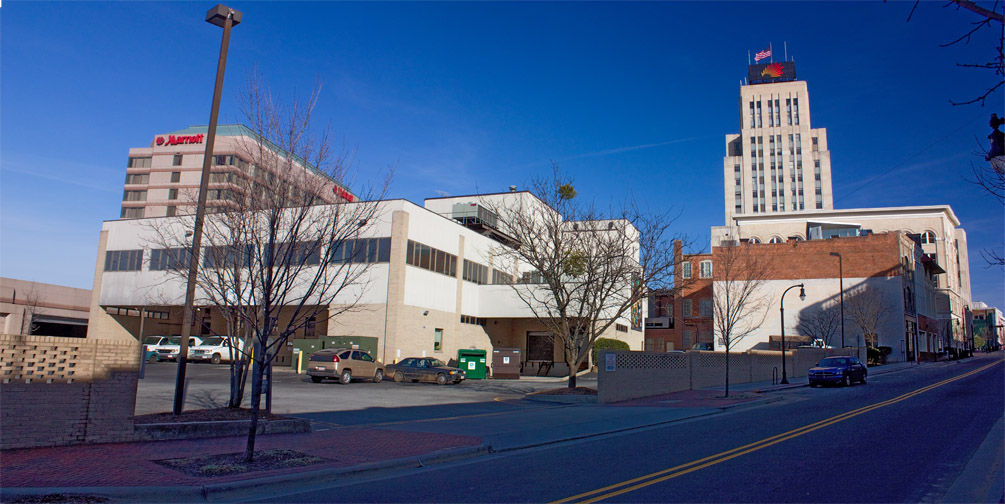 I hope that Self-Help, the owner of this parking lot, eventually brings facades back to the north side of West Main St. along this block - it would be truly transformative. There is the opportunity to leave the access to Ninth St. Bakery open from East Chapel Hill, with some accompanying parking there - perhaps NSB would actually occupy one of the storefronts on West Main.

The United Dollar Store is somewhat "famous" for i

The United Dollar Store is somewhat "famous" for its contribution to the Piedmont Blues. In late 1934, businessman and part-time talent scout/A&R (Artist and Repertoire) man for ARC (the American Record Corporation) James B. Long was transferred to the Durham United Dollar Store (from the Kinston, NC store) to manage the store for the Evans family. While at the Durham store, Long sold phonographs as well as records and on the side conducted musical auditions; musicians would come from throughout the area to try out for Long. The store was where Long was introduced to Fulton Allen (a.k.a. Blind Boy Fuller) by washboard player George Washington (a.k.a. Bull City Red). Long gave Allen some new clothes from the store, and soon got Allen recording. The store is also where Long met talented local musicians such as Brownie McGhee, Sonny Terry, and "Reverend" Gary Davis. In 1935, Long was transferred to the Burlington United Dollar Store, where he continued his relationship with local musicians.