317-325
West Main Street
Durham
NC
Year built
1920s
Construction type
Masonry
Local historic district
Downtown Durham
National Register
Downtown Durham
Neighborhood
Downtown Central
Building Type
Commercial
Can you help?
You don't need to know everything, but do you know the architect?
Log in or register and you can edit this.

As with many of the structures on Main St., 317 West Main began by providing space to multiple small retail establishments. 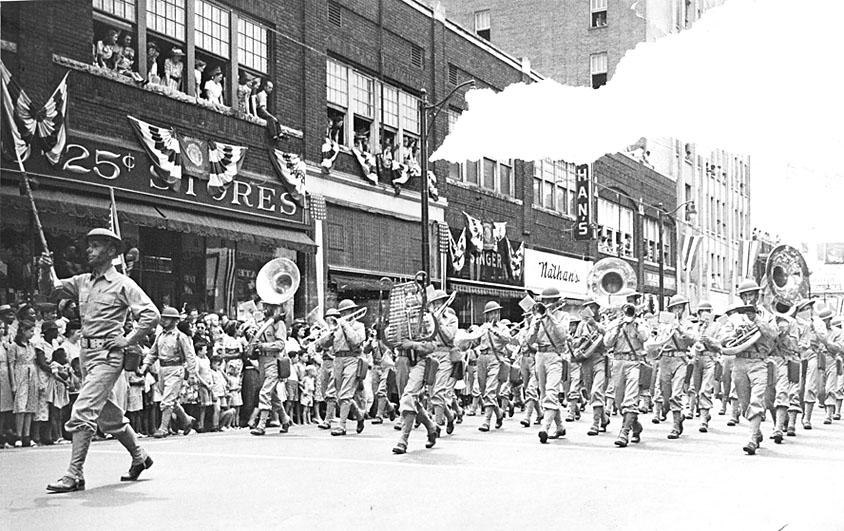 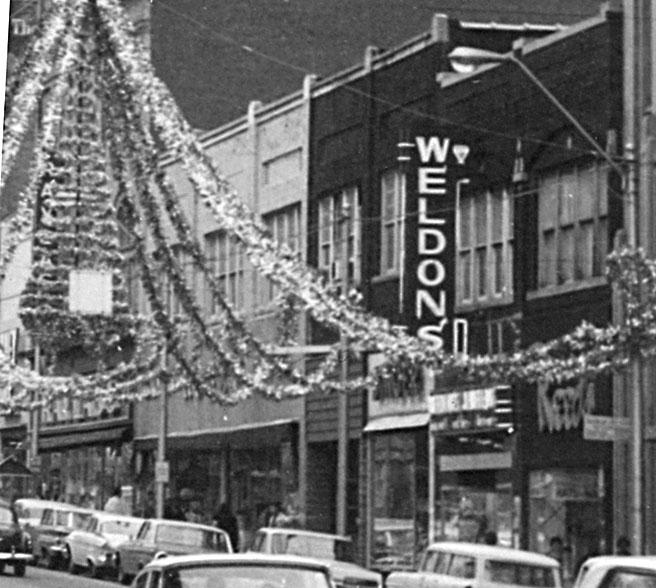 By the 1960s, many of stores on Main St. had grown to take over several of the spaces. 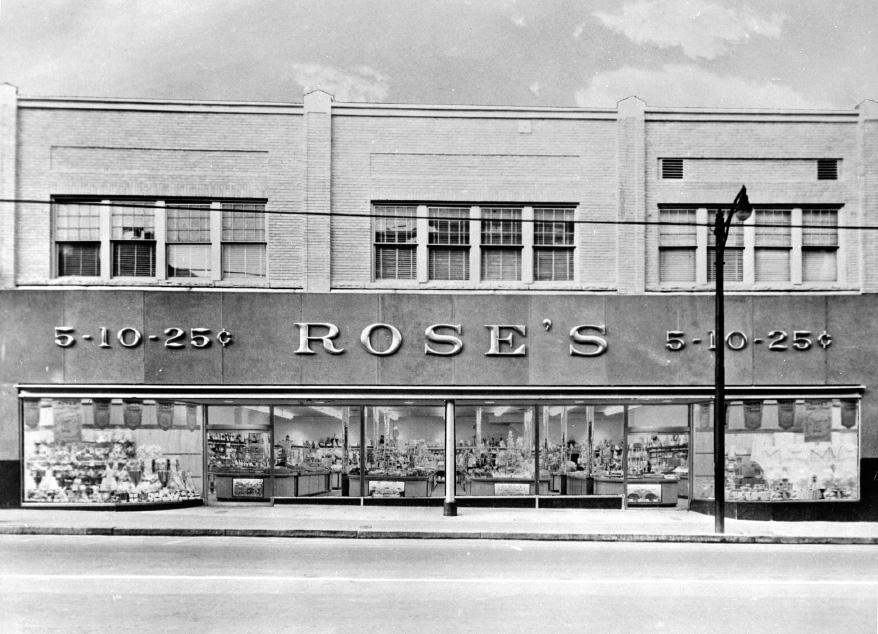 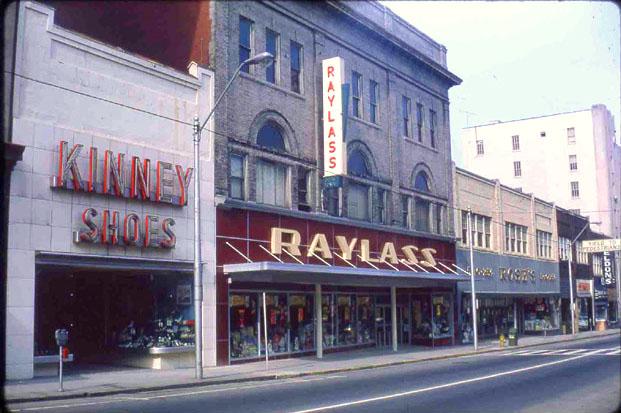 Rose's has taken over the eastern 3 storefronts, while another business remains in the 4th.
(Courtesy Durham County Library) 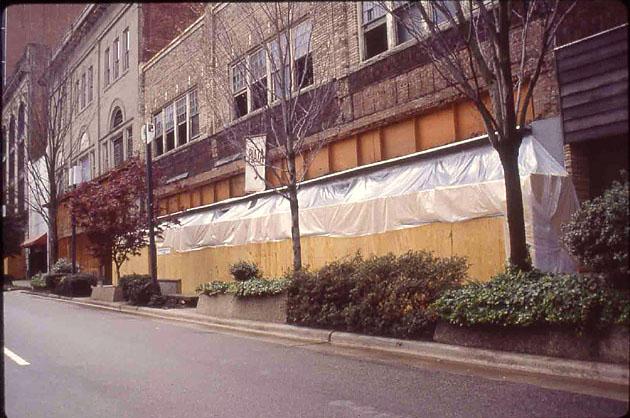 These businesses then closed down and moved out to the malls during the late 1960s and early 1970s; their large storefronts were dismantled.
(Courtesy Durham County Library)

And the storefronts have returned to individual use. This building is divided into condominiums.

I also find the brickwork curious on this building, as it appears dark in the oldest picture, and then the eastern three sections appear light during the 1960s, while the 4th remains dark brick. At this point, all 4 sections are light. Although I suppose it is likely painted, it doesn't have the appearance of paint. 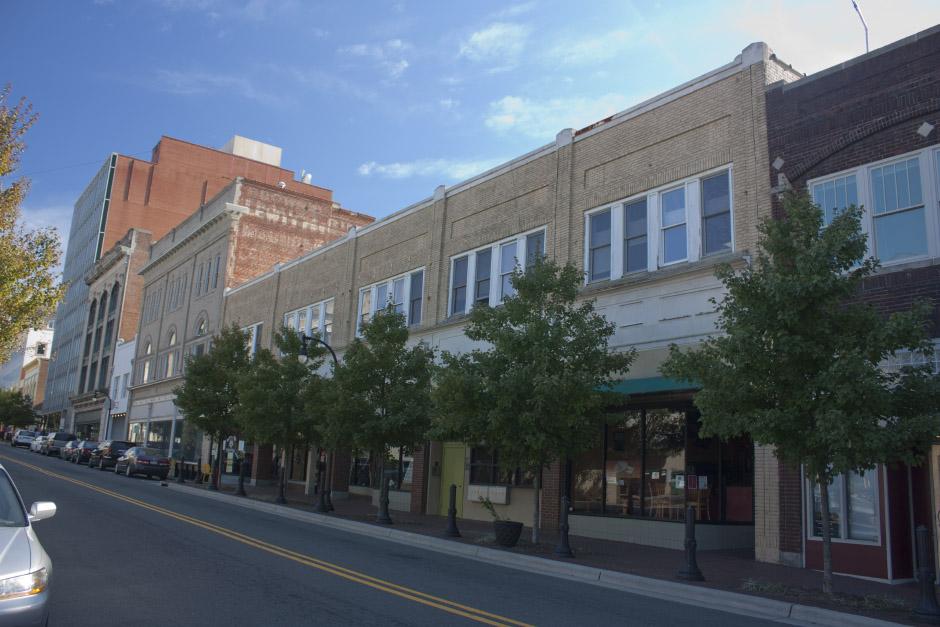 From the HPSD tour booklet: In the years following World War II, America's love affair with the private automobile came into full flower. By 1960, there were finally enough cars so that nearly everybody had access to one. The roads were wide open; we had conquered time and distance. In the heady drunkenness of our new love, our hands and arms grew...
Read More

Driving along Ramseur, you can see some funky residential loft-style places in between the karate studio and "Teasers" (wasn't that place a gay dance club when we were in school?). I'd consider living there.

The Maverick building I considered buying is on the north side of Parrish between Orange and Corcoran; in Google Maps it has a red roof and a surface alleyway to its west. If I could figure out the address I'd love to look up what it sold for.

Those are great lofts; they were on the two Preservation Durham home tours downtown in the past several years - very cool spaces inside.

I've been trying to remember what the name of the now-Teasers when we were in college - it was oriented towards a gay clientele. I'm getting to that building in a few days, and I'd like to be able to recount some of its recent history, so if you think of it (or know someone who can) let me know.

I couldn't see a building with a red roof on Google, and I'm not sure I understand the alley to the west - was it on Orange instead of Parrish? The only alley I know in that block runs N-S, parallel to Orange, but dead-ends before it gets to Parrish.

re: gay club off Ramseur - Are you thinking of 42nd Street, later the Power Company?

Teasers was originally the Power Company, once a mixed club and one of few dance clubs in Durham. It later became a hip hop club and police were called there regularly upon closing due to troubles in the lot and parking garage. The adult club now operates out of the basement.

323 West main has 9 residential lofts, two that run front to back and the other split between front and back. There is one mezzanine level condo as well. There are five commercial units downstairs. As of 7/2007 they are left to right, Blue Mountain Catering, Exotique, Martinez Creations, In Flight Hair Salon and Guajillos Mexican Restaurant. 323 is known as "The Lofts" and was renovated as such around 1994. I believe it was one of the original residential condo projects in downtown done by Mark Properties.

"323 is known as "The Lofts" and was renovated as such around 1994. I believe it was one of the original residential condo projects in downtown done by Mark Properties."

What DS says is correct. From 1994-2003, I lived in the loft condo directly above the green awning that is pictured. I believe that an earlier incarnation of the building was as a Rose's Department Store. I remember upon moving in, that an old metal Rose's sign was in one of the condos.