314-316
West Main Street
Durham
NC
Year built
1880-1919
Neighborhood
Downtown Central
Use
Auto Repair
Building Type
Commercial
Can you help?
You don't need to know everything, but do you know the architect?
Log in or register and you can edit this. 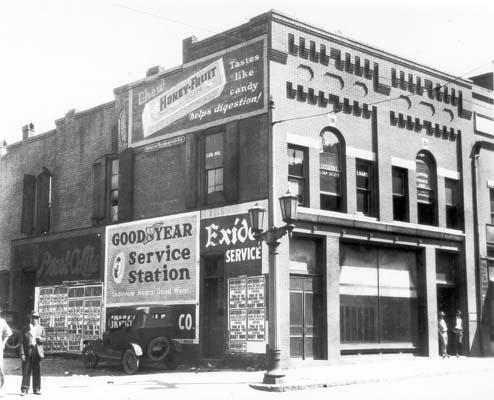 Belk-Hudson, later Hudson-Belk, and, still later, Belk-Leggett was one of the (if not the) first chain stores to enter Durham. A partnership between the Belk company, which had started in Monroe, NC in 1888, and the Hudson brothers of Anson County, NC, Durham's store opened in 1919, 4 years after Belk's first incursion into the Piedmont with the Hudson brothers - located on Fayetteville St. in Raleigh. 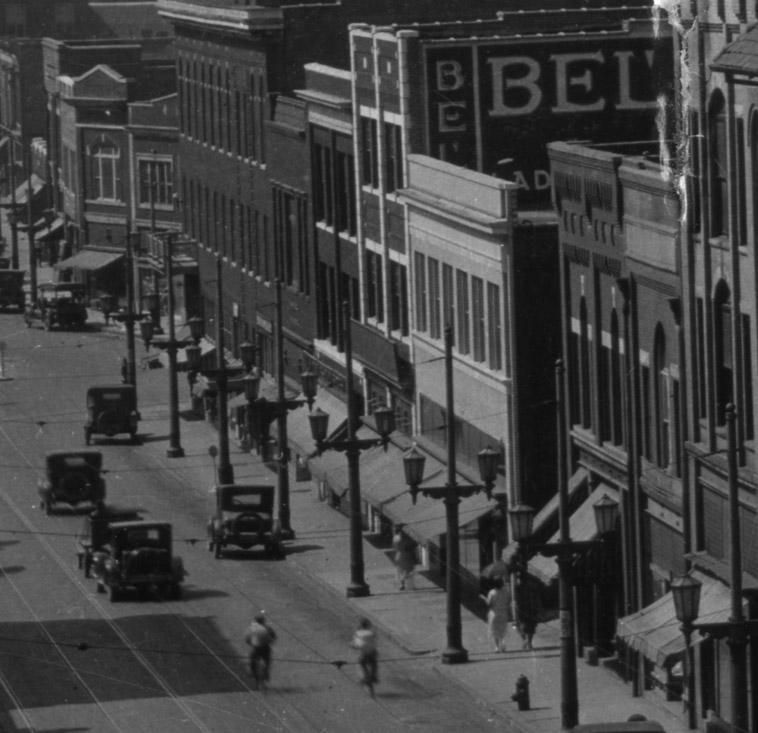 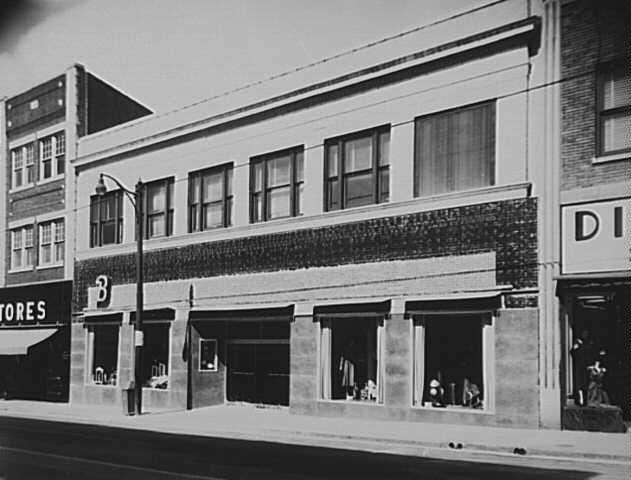 Looking north from the south side of West Main st.
(Courtesy Duke Archives)

All of these buildings extended through to East Chapel Hill St.

Here is a much older picture of 314-316 West Main St. before the building with "DI(vine)" in the above picture was built.

This less-than-optimal photo shows all of the facades by the 1940s. United Department Stores (formerly United Dollar Store) had taken over 326-328 West Main in the late 1920s, and Belk had expanded to the east by the 1940s. 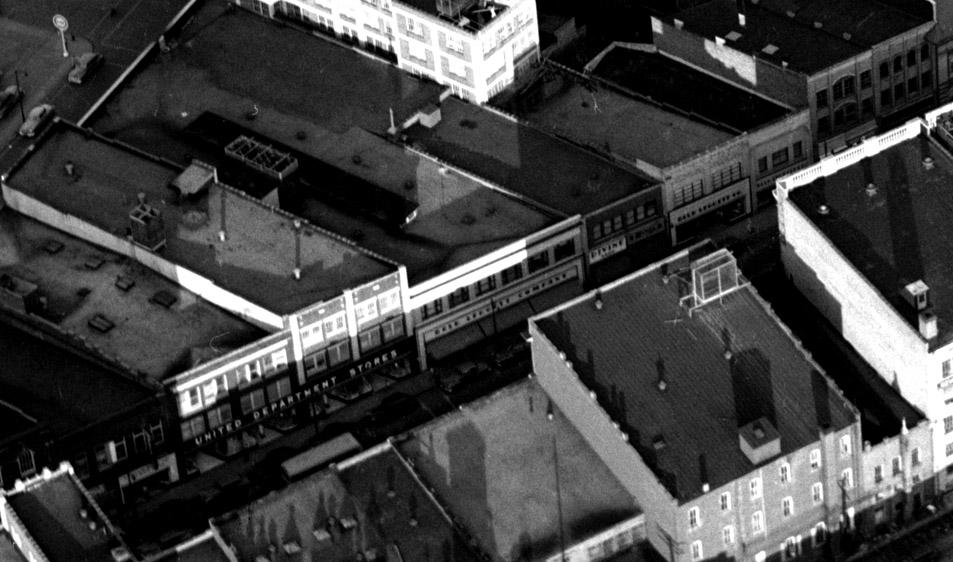 And below, another oblique view looking northeast-ish up West Main St. 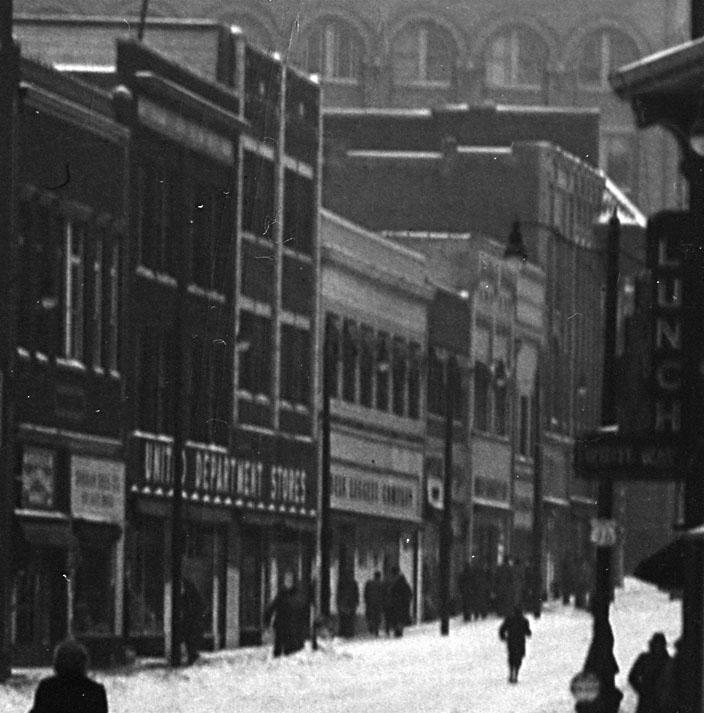 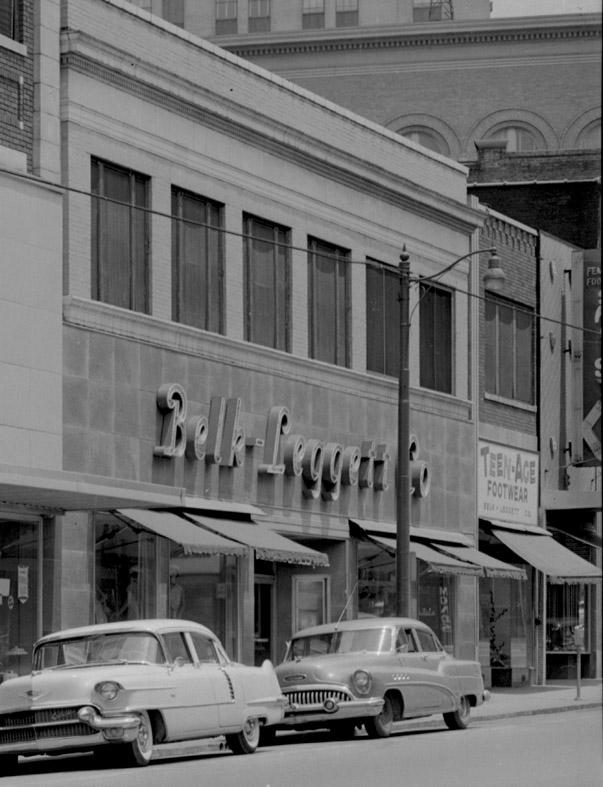 By the 1960s, United had gone out of business,and Belk took over those buildings as well. The false front facades took over downtown en masse. Belk bricked up all of the windows and put on a uniform facade. 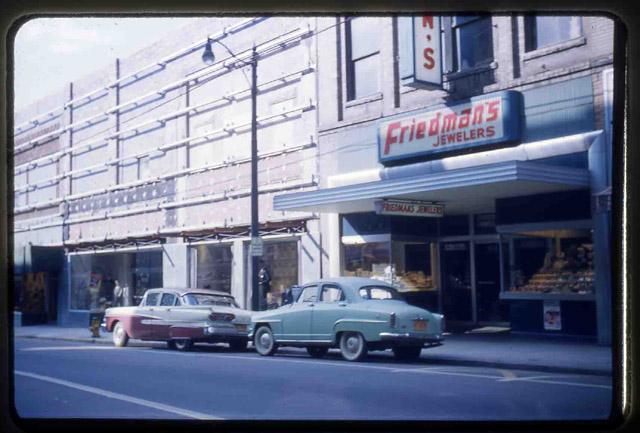 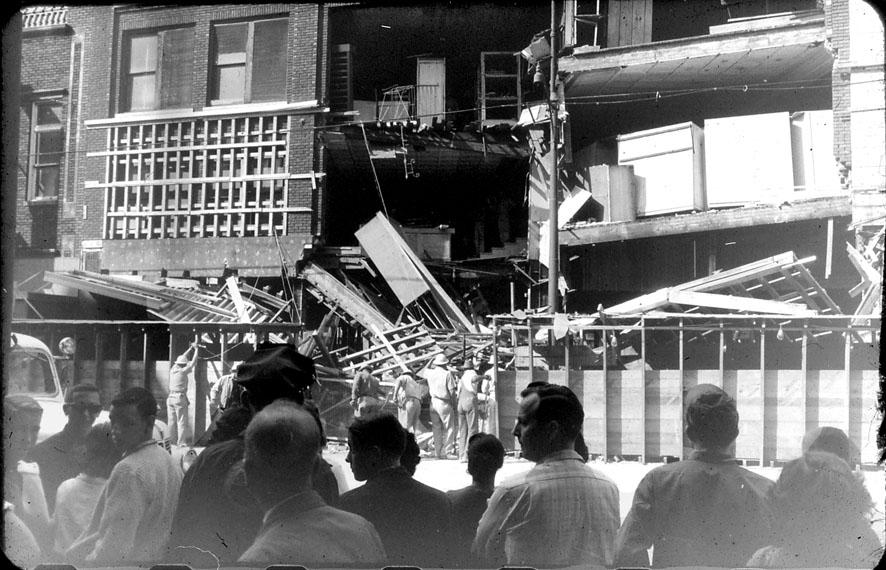 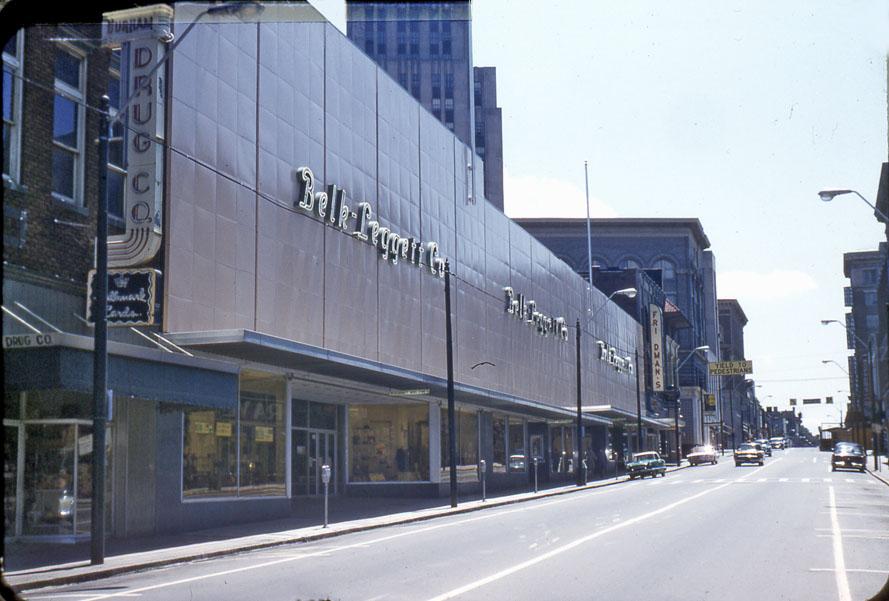 Perhaps because of its stature, it lasted longer than most downtown. But eventually, the lure of the mall was too much, and in 1975, Belk departed for the now-departed South Square. After attempts to sell the building (and attempts to find a 'shopping center' tenant to turn it into a "minimall" by the Zuchelli, Hunter and Assoc. consulting firm, hired by Nello Teer to "try to bring something back to downtown") the owners prepared to demolish the buildings. John Flowers, president of the Historic Preservation Society, said that the historic society had no interest in the future of the building, according to contemporaneous Herald-Sun article - that this group of buildings "[was] not a great piece of architecture." There was a great deal of conviction that the vacant lot would be more appealing for future development than the buildings. 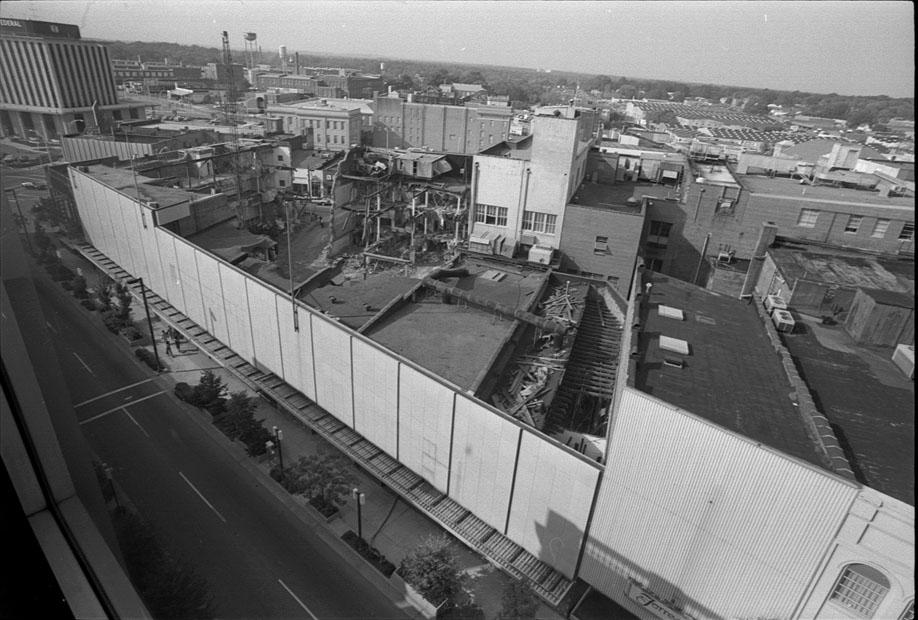 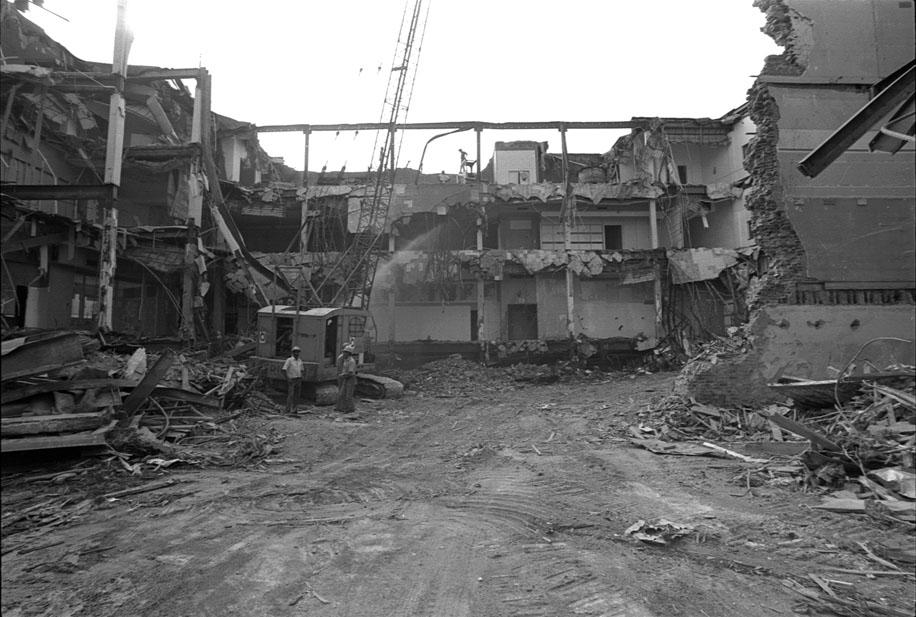 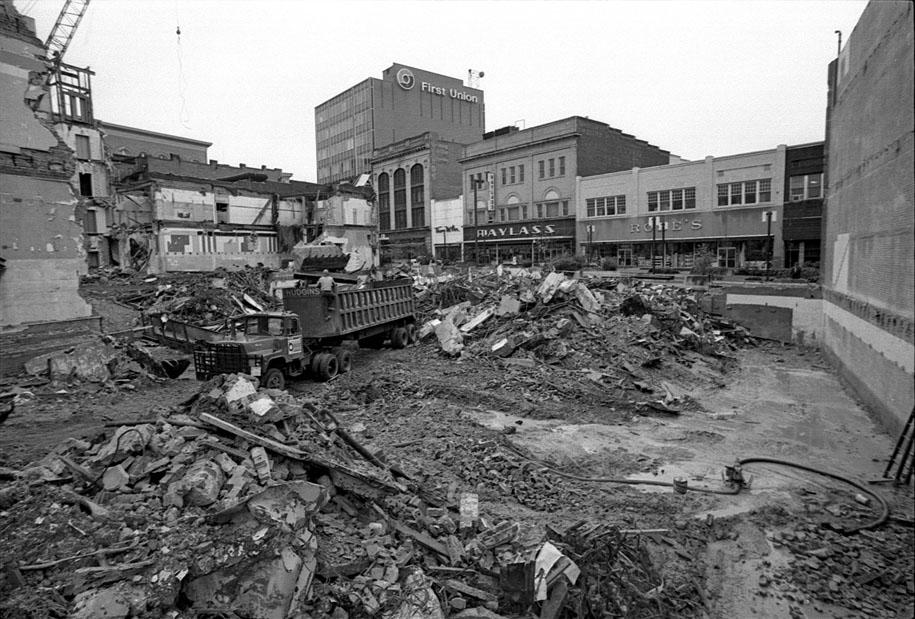 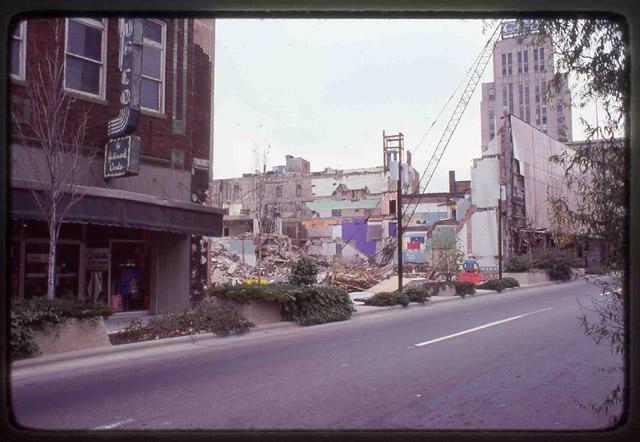 The development never came - as was the case with any number of 'speculative demolitions' downtown. This space became surface parking, which it remains. 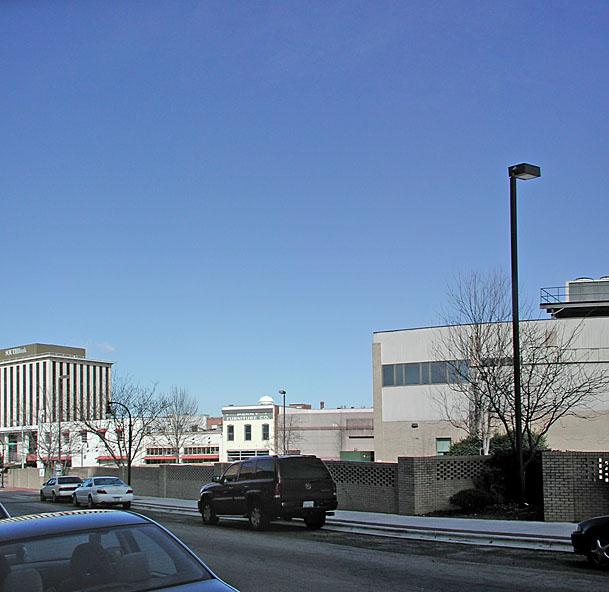