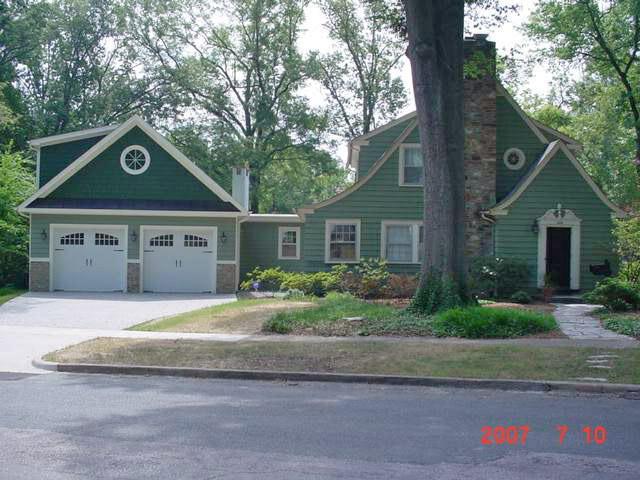 The story told of 1532 Hermitage Court begins that it was built for the builder's daughter as a wedding present, although it is unclear if the daughter and her husband lived in the house.

One and 1⁄2-story front-gable Tudor Cottage with concave eaves, a front stone chimney, and a gabled entrance bay with a swan’s neck pediment above the door. Windows include 8-over-8 and 6- over-6 sashes, a shed dormer on both sides, and a bull’s eye window in the front gable. At the left rear is a 1-story flat-roofed addition. Alton R. Holland, of Holland Bros. Furniture, was the occupant in 1930.

At some point soon after WWII, during the 1950's, a renovation and addition was completed.  It is believed that this work was done by C.T. Wilson for the owners, Hans and Winnie Dee Hoefler; Hans was an attorney in Durham.  The porch on the east side of the front was enclosed, central air conditioning was added, an addition was built on the west side that raised the roof (part of the original slate roof is still visible in the attic) and a single story, flat roof addition was added at the rear of the house.  Before the addition, the house originally ended at the dining room, which is now in the center of the home.  Part of this rear addition was a large room with a fire place that had a cork floor and acoustical ceiling tiles - the room was used as a practice room by one of the family members that played the piano.

During the '70s the Forest Hills neighborhood was in transition from the families that had been there for the past 20 or more years to young families just beginning to raise families of their own. In 1972 the Hoeflers sold the house to Lang family.  The Langs continued to improve the house through the '70's and '80's including work on the bathrooms, paving the gravel driveway and adding a large brick patio in the backyard.  Dr. Lang also had a fondness of the squirrels of Hermitage Court and kept them fed over the years.

Through the mid and late 2000's Hermitage Court is again in a generational transition and in 2006 the Langs sold 1532 to the Niedels.  Ian Niedel and Libby Lang had been friends throughout their school years and after both moved away for undergrad and grad schools, but both eventually returned to Durham.  Libby, now known as Ms Lang to her 2nd grade class at Durham Academy, has been pleased to know that Ian and his family are building their own family memories in the great house and neighborhood that she loved.  The Niedels completed another thorough renovation of 1532 in 2007, adding approximately 1000 sf, replacing all of the electrical, plumbing and HVAC systems in the house, relocating and expanding the kitchen to the rear to overlook the Lang's brick patio and adding a two car garage and a driveway on the east side of the house.

Thank you to Virginia and Libby Lang for providing history.