122
West Main Street
Durham
NC
Year built
1914
Year demolished
2015
Local historic district
Downtown Durham
National Register
Downtown Durham
Neighborhood
Downtown Central
Building Type
Commercial
Can you help?
You don't need to know everything, but do you know the architect?
Log in or register and you can edit this.

The two buildings at 120 and 122 West Main St., immediately to the east of the Geer Building, were constructed in the late 1910s, replacing earlier buildings that had been destroyed by the fire of 1914. 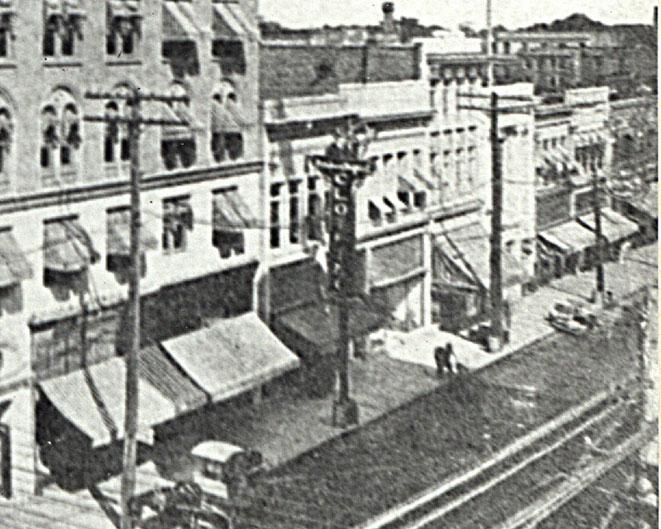 Above, a picture of the north side of the 100 block of West Main St. looking northeast. It was taken a few years after the rebuilding of the block. The Geer building is at the left. 122 West Main has a big vertical sign out front that says "Clothing". 120 West Main is immediately to its right.
(Courtesy Durham County Library)

And a nighttime shot that shows little except the lit-up clothing sign, late 1910s, looking northeast. 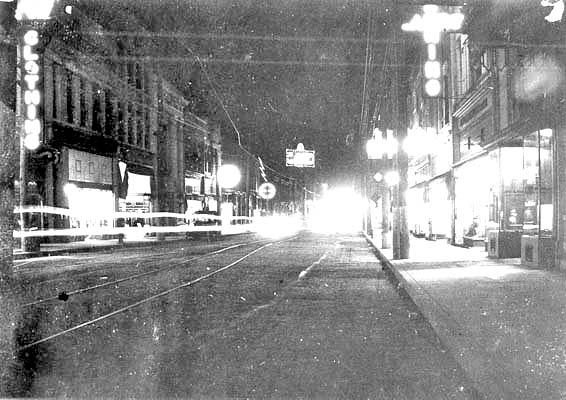 (Although the big, lit-up "Durham: Renowned Around the World" sign is visible in the distance atop the building on the northeast corner of Church and E. Main.)
(Courtesy Durham County Library) 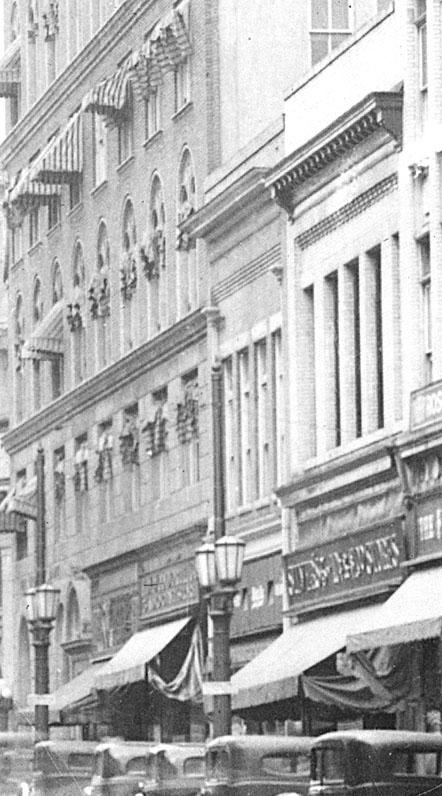 122 West Main became an Eckerd's drugstore sometime between the 1920s and 1940s, and Silver's reamined. Although it barely shows a relevant piece, I have to throw in this picture. 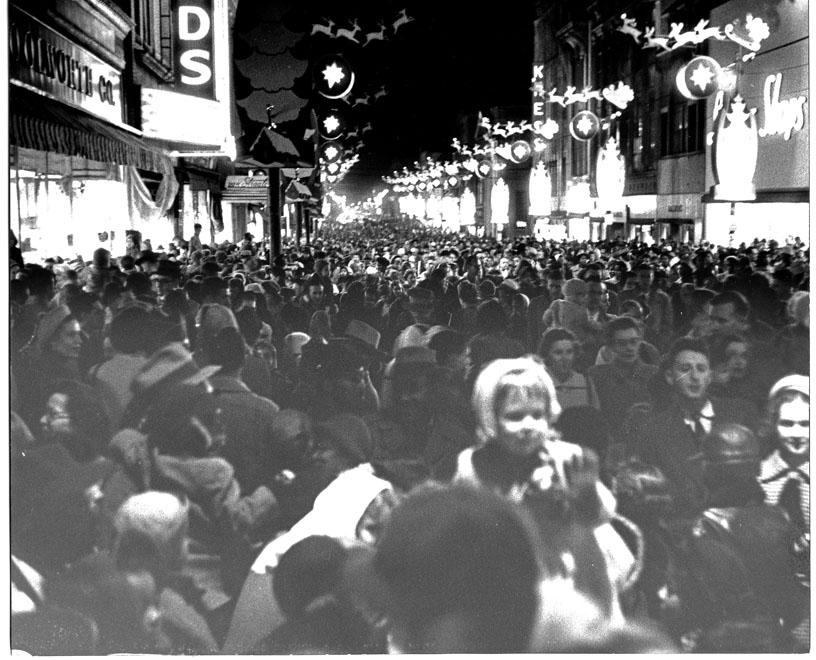 That's the 100 block of West Main St. at Thanksgiving-time, late 1940s. The bottom of the Eckerd sign is visible on the left, and the lit-up Kress sign visible at the end of the block on the right. Amazing.

By 1965, the bloom was decidedly off-the-rose downtown, and this street fair in the 100 block of W. Main looks pretty contrived. 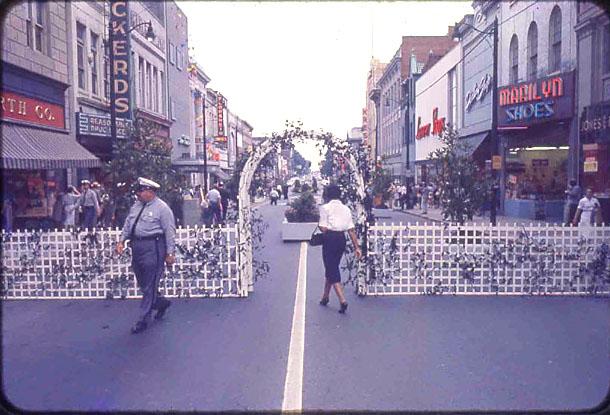 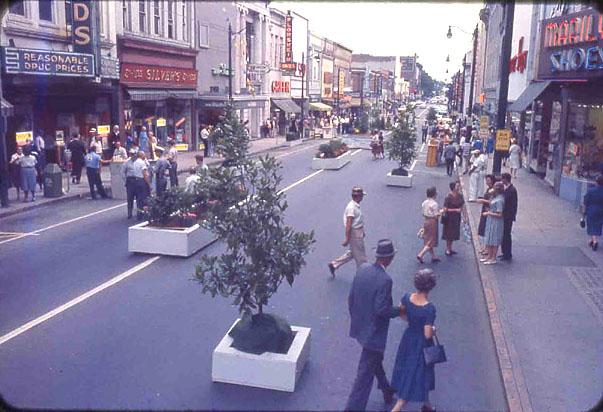 The Eckerd's and Silver's signs are visible on the left-hand side. Although the full building facade isn't visible, you can see that there is a bit of deferred maintenance beginning to show.

I don't know when these businesses left downtown. But they were certainly gone by the 1990s. In the late 1990s, 122 West Main was the home of "Mr. Shoe" and 120 West Main housed a club called 'Wonderland'. Unfortunately, in 2001, there was a fire in 120 West Main, which essentially gutted the building. 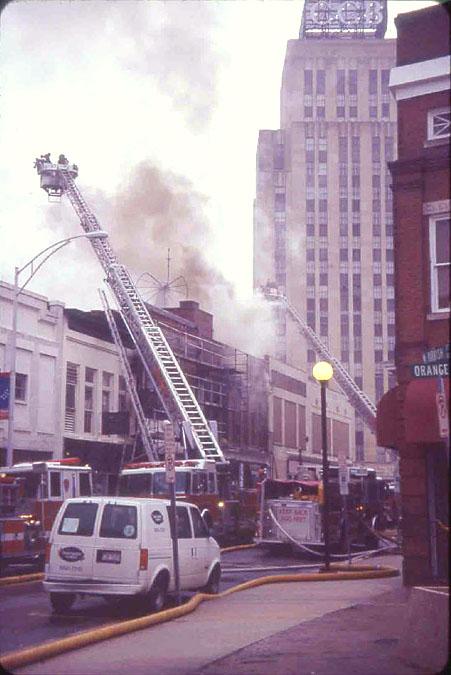 From the Parrish St. side, 2001.
(Courtesy Durham County Library)

From there 118 W. Main sat empty for several years. 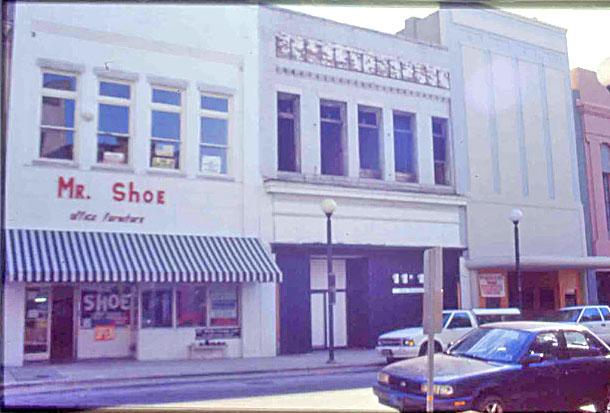 And then the jockeying among the downtown development folks began in earnest.
Webb Patterson and Zaploski and Rudd submitted a proposal to build a fancy new building on the spot where the rest of the Geer Building (Woolworth's) was being demolished back in 2003. The city owned this land because Woolworth's gave them the land and the remnant of the Geer Building in the late 1990s.

Tom Nieman of Blue Devil Ventures seemed to have procured options on 122 and 120 West Main around this same time, with the hope of proposing "the largest signature skyscraper possible" - evidently for the combined site.

Somehow, Zaploski and Rudd fell out of the picture. Carl Webb of Webb Patterson purchased the Geer Building site and joined Lemanski in Greenfire. So it then became a Greenfire project.

The options on 120-122 West Main switched from BDV to Nieman Capital. Tom Nieman stated in June 2005 that he had been negotiating with Carl Webb to join the project in order to expand the size of the shiny tower, but that had broken off.

In late 2005, more implications arose that an even-more-special building could be built with 120-122 West Main out of the way.

In - I believe November 2005, I learned that Housing and Community Development (the portion now split off as 'Neighborhood Improvement Services') had officially put these buildings on the nuisance-abatement chopping block because they were listed on a "Housing Update" sheet from a PAC5 meeting. I attended the Historic Preservation Commission meeting in December 2005 where these buildings came before the Commission (as they are in the downtown local historic district.) I listened as Constance Stancil said the buildings were a safety hazard and structurally unsound. She seemed unconcerned with any historic significance of the building or the opinion of the HPC more generally. Bill Kalkhof stood and gave his "We don't have river, but we do have historic architecutre - but sometimes [we have to tear it down]" speech. The owners, the Ocholas, were not present at the meeting, and Constance Stancil (or perhaps Gray Dawson) said that they had been notified, but were unresponsive and unreachable.

I spoke for the historic significance of the buildings, and the iterative loss of structures downtown that had left us with so few historic structures. A few others spoke as well. The HPC deferred decision, pending more information.

After the meeting, I looked up the Ocholas' address and drove out to their house. I knocked on the door and spoke with a family member and left a note for the owners to call me. Which they did, that night, and asked me "What meeting?"

Now, I'm not naive about what they may or may not have known, but this whole thing, given the timing of the shiny bauble of an office tower, felt pretty suspicious to me. I mean, suddenly, when there's talk that the shiny office tower could be even shinier with more space, the nuisance abatement process shifts into high-gear, and 120 W Main must be torn down immediately? C'mon.

I met with the Ochola's (with others) and they informed us that they did not have they money to fix the building, but they had worked to try to comply with H&CD to secure the building. They had been trying to sell the building to Tom Nieman for months - per them, he had a contract on the building with an open-ended closing date - which kept pushing later and later. In fact, because it was under contract, they could not modify the building. Should the city demolish the building, they would be saddled with the lien.

The smell of manipulation of the nuisance-abatement process had become overpowering to me at that point, and I wrote a letter on ABCD, which the Herald-Sun asked if they could publish as an op-ed, stating, essentially, shenanigans.

Everyone went into a tizzy, and HPSD wrote a letter to the Herald to say that what they believed in was "historic preservation in the context of economic development" and had no problem with their friends downtown. H&CD, DDI, and everyone else maintained their position that the buidlings were "too far gone" that they there was "nothing there to work with" and that it "hard to make economic sense out of that building."

Somehow, though, demolition was temporarily staved off. And then Greenfire managed to buy the buildings from the Ocholas and Tom Nieman. They've covered the unrenovated facades and painted the side walls green. Somehow, despite the imminent structural failure predicted in 12/05, the buildings have remained standing and, from all appearances, unchanged in the subsequent 15 months. 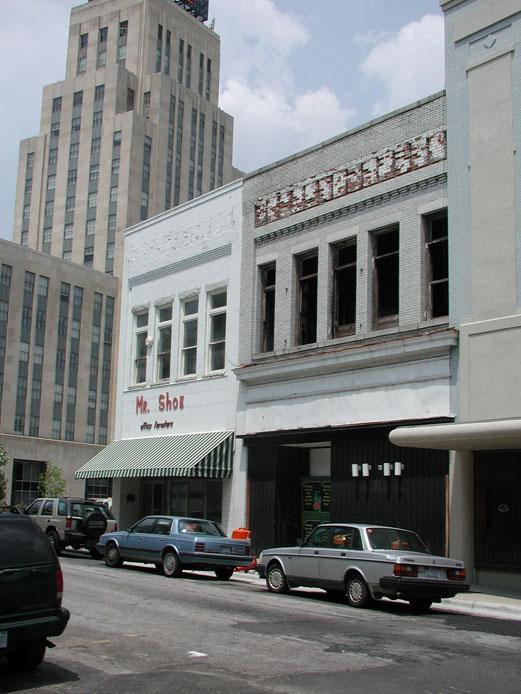 The lesson from that process was the same mantra that I keep preaching, as I did a few days ago. We need tools other than demolition for dealing with demolition-by-neglect. I am in no way in favor of these buildings sitting vacant and deteriorating; I simply didn't think the solution to that problem was to tear the buildings down - particularly in a rather unseemly linkage to new development (a framework that would be recapitulted a few months later at Little Five Points.) They are contributing structures in a local and national historic district. Surely, given the gobs of money being thrown around downtown, we can save these structures.

So what will happen with these buildings? Does Greenfire treasure what remains of our architectural heritage enough to renovate these buildings and integrate them into the shiny tower on the Geer site? Or do we lose two more buildings in the endless cycle of demolition in Durham?

Finally demolished, much to the happiness of the everything-must-be-new-and-shiny downtown boosters. In its place, a 26 story building called, inspirationally, the "city center project." Yay - generica. 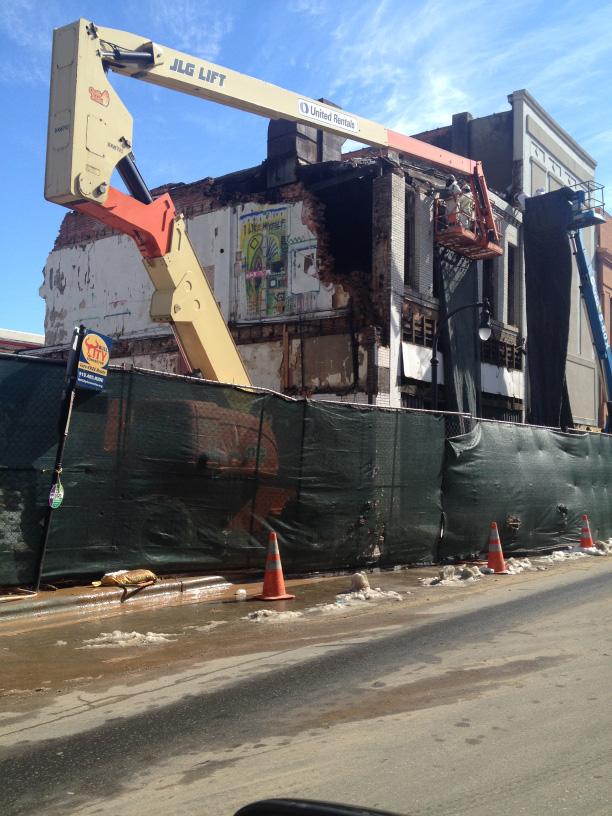 The developers of the 'City Center' tower built a brand new replica of this storefront in front of the continuous steel and concrete structure behind the former 122, 120, and 118 West Main Sts. I'm honestly not sure how to feel about that. I guess, architecturally, it's nice to have something with more human-scale detail than the rest of the new construction, but I wouldn't call it historic preservation.