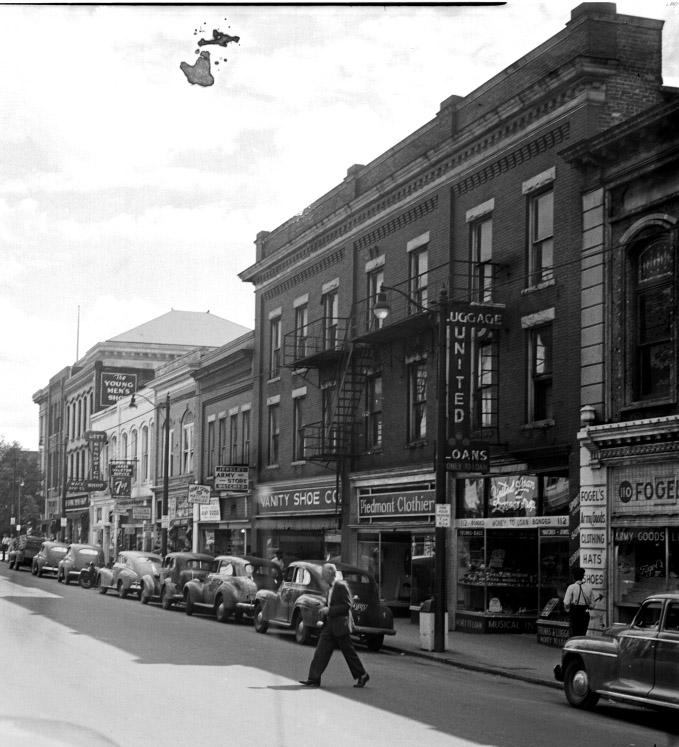 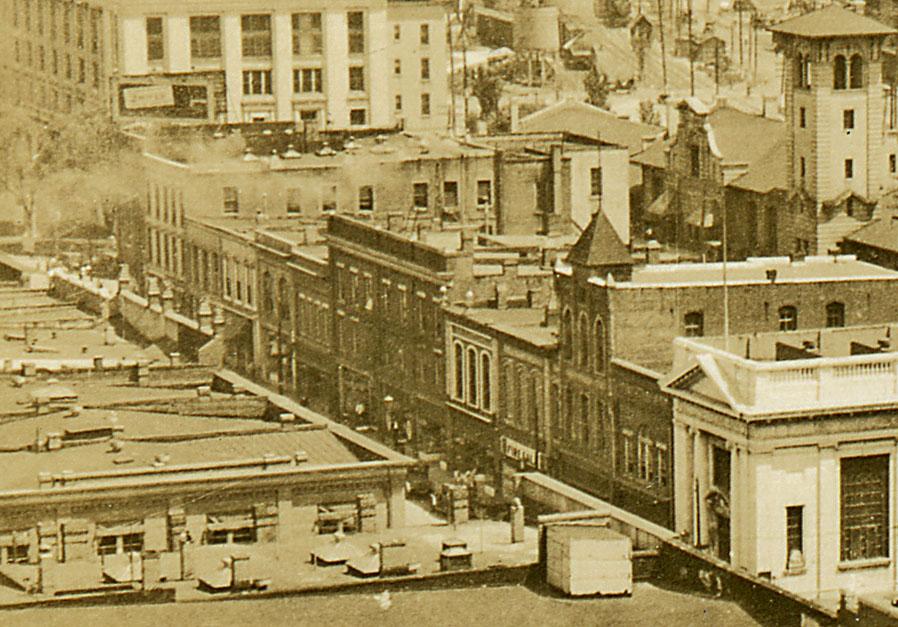 Above, the south side of the 100 block of East Main St., looking southeast, 1924. 112-116 East Main is the three-story structure mid-block
(Courtesy Duke Archives)

No one, distinct, business occupied most of these structures. Rather, a parade of dozens of different businesses utilized the spaces. 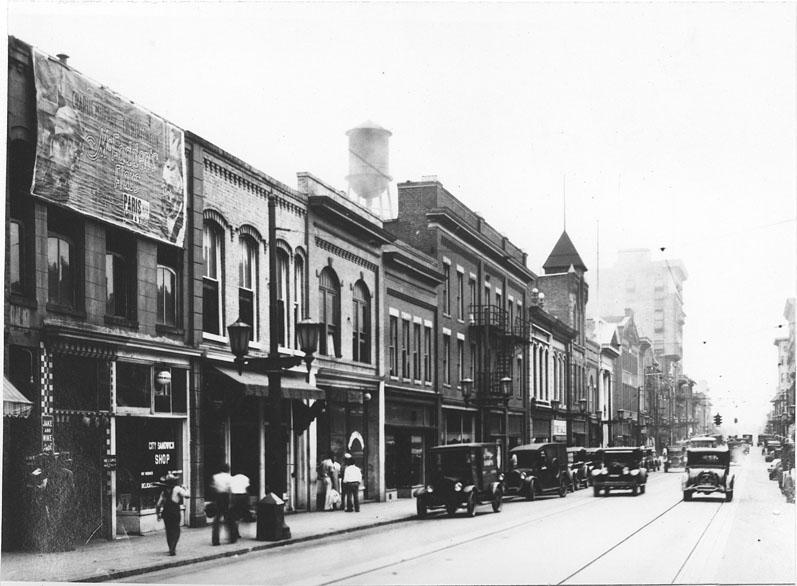 The south side of the 100 block of East Main St., looking west-southwest, 1927. The banner is advertising "McFadden's Flats" at the Paris Theater across the street, which would later become the Uptown Theater. 112-116 has a fire escape on the front of the building. 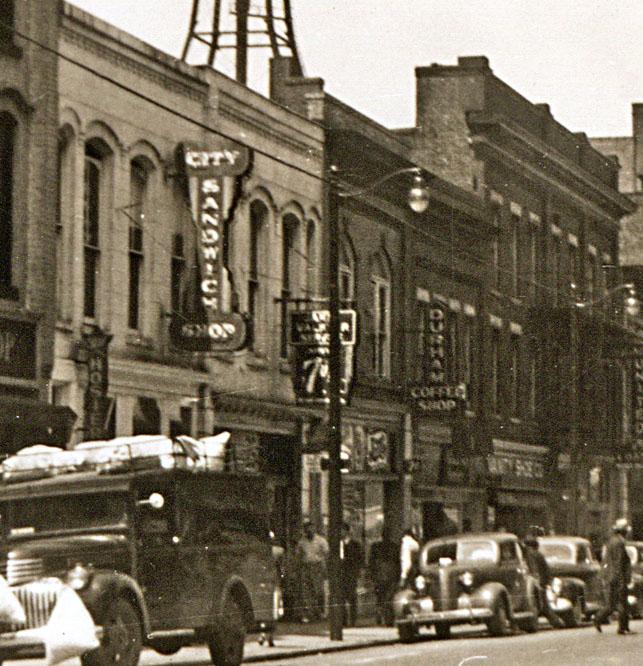 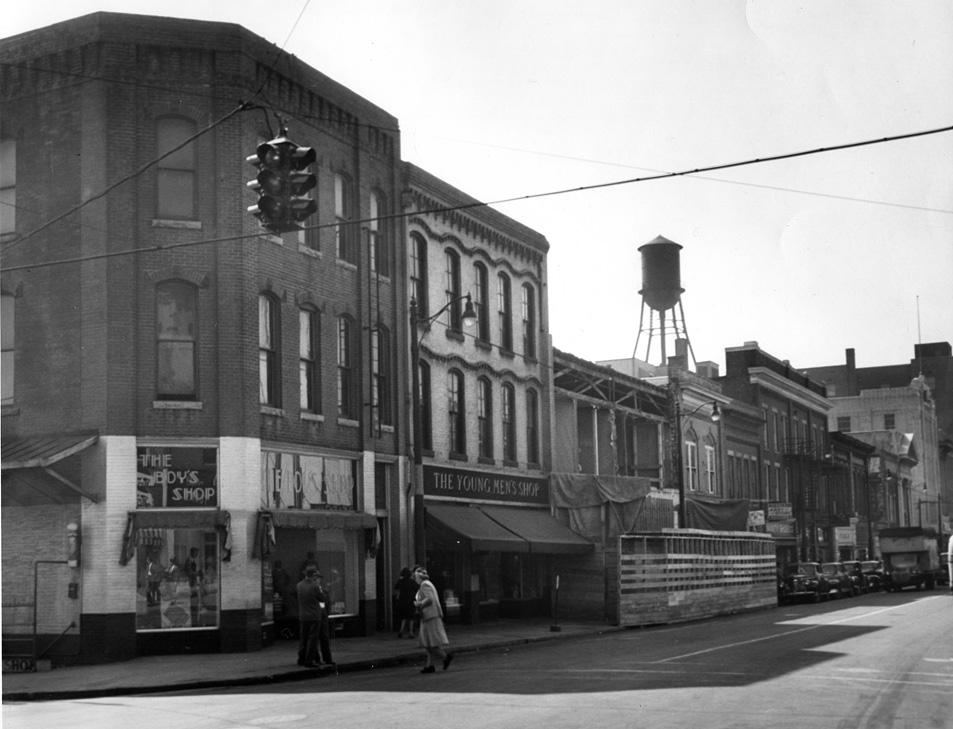 And secondly, removal of the upper floors of various buildings. By 1952, 112 housed The Hub, 114 Piedmont Dress Shop, and 118 the Vanity Shoe Co. Sometime shortly thereafter, the entire third floor was chopped off. Maybe just to get rid of the fire escape? 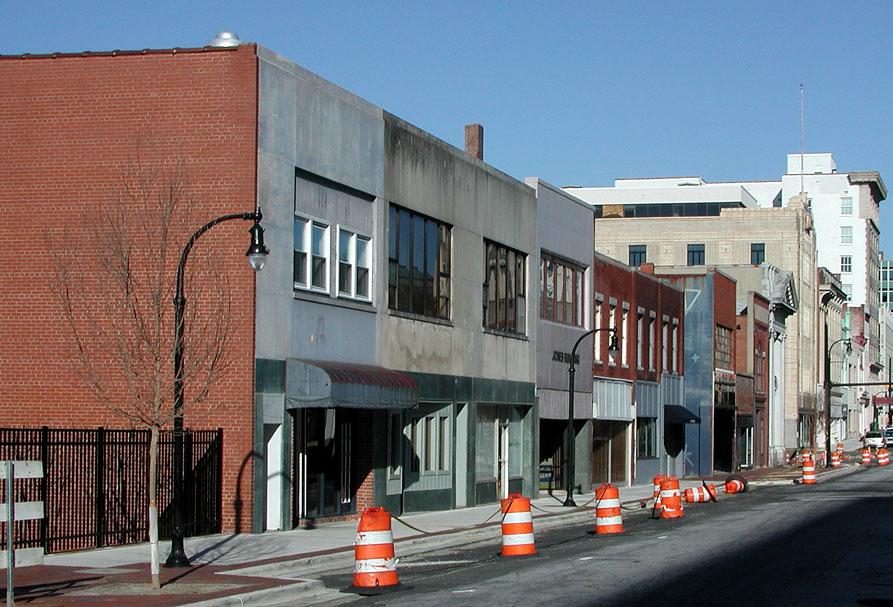 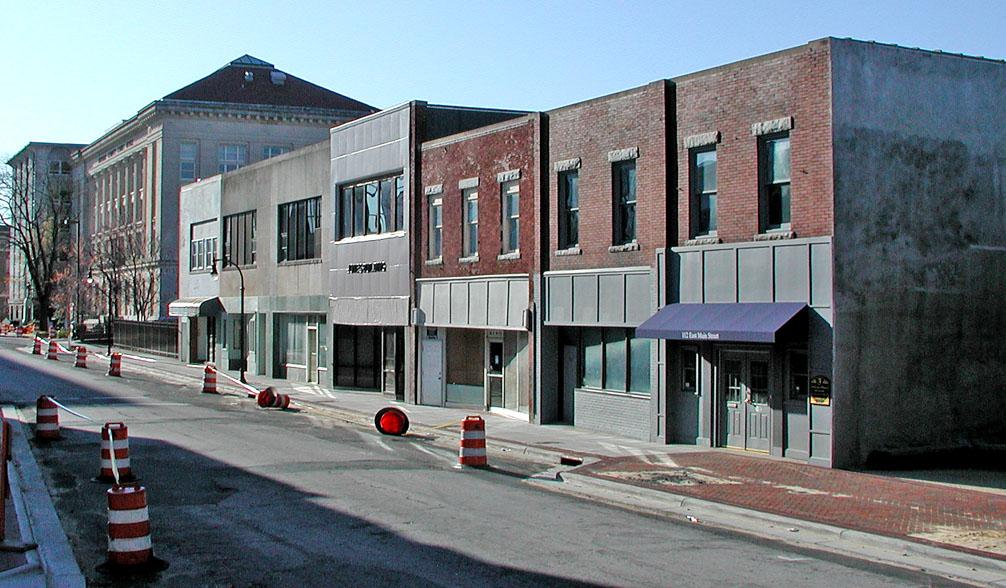 And the view southeast of a decapitated 112-116 East Main St. 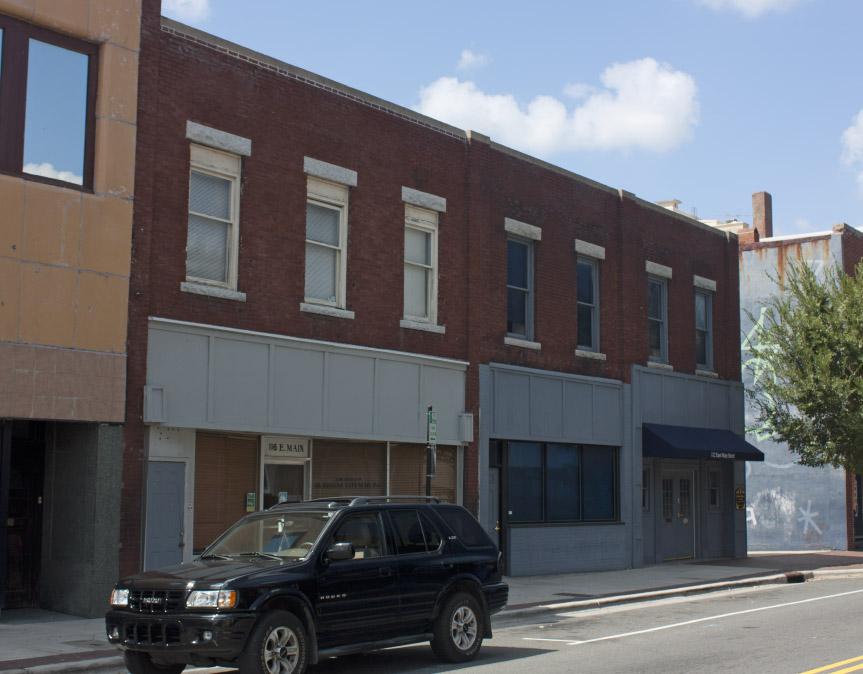 One explanation may be the fire marshal requiring the buildings to be code compliant (a sometimes expensive endeavor) -- or removal of upper floors.

This explains why the old Duke & Sons tobacco factory, built in 1884 with four stories, is now only two. See pic here... http://www.dclibrary.net/prod1/ncc/schelp/js014.htm

Fires have played an important role in downtown's built environment -- everything from the decorative fire walls at Brightleaf... to the metal fire doors (which slide shut when flames burn through the rope) at Baldwin apts.

The code enforcement piece makes sense, although it still seems like removing floors from atop one's building wouldn't be a big cost-savings over code. There was certainly a lot of grandfather-ing with code, so I'm not sure what elements would apply and which wouldn't. The oddest thing about this to me was the shrinking of older buildings while, at the same time SouthBank and 301 West Main were going up, up, up downtown.

Thanks for your input!

I was wondering what your opinion is on preserving historic buildings that have been completely stripped of their original character. Those buildings you profiled today may have been built in the 1920s or earlier, but they appear to have nothing left of their original appearance, and in my humble opinion, look rather dull and pathetic now. I am guessing that a full restoration of their old form would be economically impossible. Hypothetically speaking, if somebody proposed a new, high-quality building(s) that respected the street, was built with high quality materials, had nice architecture, etc., would you be in favor of removal of these decapitated and compromised historic buildings for something new?

I am just curious to get people's opinions on this matter. It may be a case-by-case basis, but it is something I haven't been able to figure out myself.

I think it's a case-by-case. I think I would start with the inside of these buildings. If there is good fabric that you could strip down to on the inside, I would opt for redoing the facades (I don't mean re-creating, which would be prohibitively expensive, as you point out.) I'm not among the preservation purists that think you should freeze an ugly building in time. I'm a big fan of the cornice added to the Professional Building on West Main, as an example.

I still try to opt for renovation, even if the inside isn't special, where feasible - addding more floors if the foundation will support, etc. That's more about sustainability (recycling) than preservation, though, for me.

I would probably have to weigh the proposed project against whatever is there - hard for me to come up with a hard and fast rule.

That first building has apartments upstairs, one of which is for rent. The ceilings are very high but I would think it would not be economically feasible to make that a 3 story again. When I saw the inside I wondered why the ceilings were soooooo high and had cabinets that you have to get on a ladder to get to. LOL thanks for the explanation.