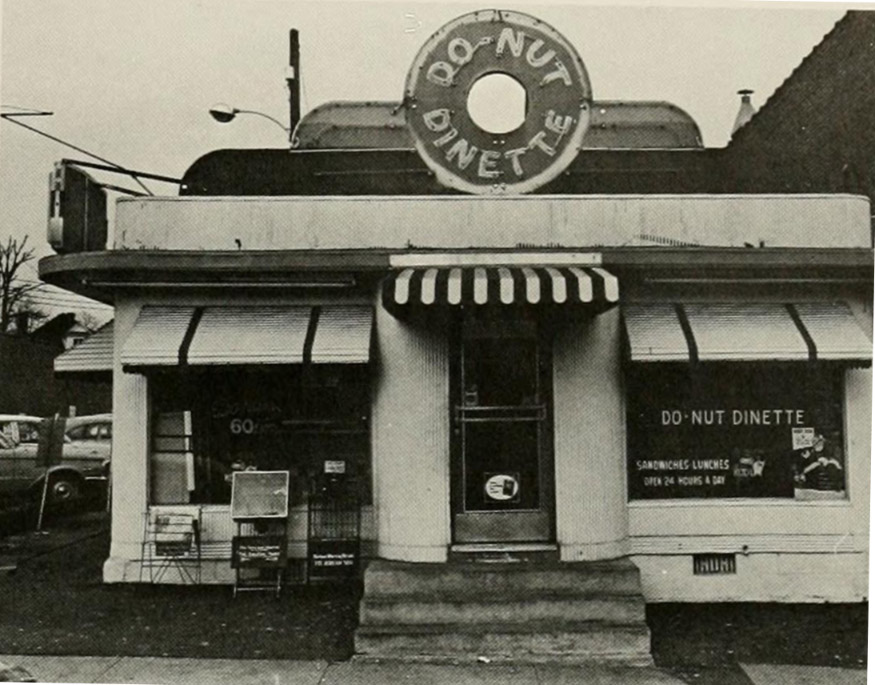 I remember going there as a

I remember going there as a kid and watching donuts being turned in the fryer with a wooden stick. There were a few stools at the counter and you could watch the whole process. I'll never forget those wonderful donuts. The closest thing to them is Britt's at Carolina Beach. I've been wanting to see a pic of the Dinette since first finding this site. Thanks Gary for the memories.

My dad worked at Sawyer &

My dad worked at Sawyer & Moore next door, and we went there all the time.  You could watch them roll and cut the donuts through the doorway into the back, then watch them cook, get frosted, and immediately eat one still hot.  Dunkin and Krispy Kreme can't hold a candle to that!

I was raised close by at 1024 W Peabody Street across from the Southern Railway train tracks behind the Toddle house.  My daddy used to take me there to watch them make donuts ...  They would line them up on a long stick and spin them in the hot sugar...  We also eat a few while we were there too.....

I remember the Do Nut

I remember the Do Nut Dinette...had forgotten all about it until I saw that one photo on facebook...and now I am remembering the donot glazing on a stick...My dad has cafes downtown and my son is getting ready to open a place in the old building at five points where the Plaza restaurant used to be...corner of Morris and Chapel Hill Sts...(Scott Harmon's project)....I love my Bull City and love seeing the historical places being restored.

Hi all, I am working on a story about the old Donu

Hi all, I am working on a story about the old Donut Dinette.Does anyone have a story to share about it? Please get in touch! I would to hear them--what you liked to eat there, when you visited, what you recall about the place.

Hi BC, I am working on a story about the Donut Din

Hi BC, I am working on a story about the Donut Dinette and would love to hear more of your memories regarding the place. Please let me know if you're interested.

I remember it well. We went there after getting o

I remember it well. We went there after getting our shots. Our mother took me and my two brothers there often, in the 50's. Our grandfather lived around the corner and we would get donuts , pick up a newspaper at Sherry's newstand and go for a visit.

I grew up at 310 Watts Street and we walked to Donut Dinette almost daily after school at George Watts and Carr Junior High. Afterwards we made a quick tour through Sawyer & Moore next door to look at the toy department and the camera shop. The best thing to eat there were the donuts--hot and dripping with sugar--and huge! Most of all I remember being there on winter days when the glass walls were so fogged you couldn't see outside (or inside). Of all the donuts I've eaten in my life, these were the best. Sitting on the bar stool at the counter eating donuts and a drinking a coke---that was the life! By my high school years we were going to the Ivy Room daily and I think the Donut Dinette had closed by then. I have always missed it and talk about it all the time.

Remembering the aroma and nothing better than a ho

Remembering the aroma and nothing better than a hot donut on a cold day. Sawyer and Moore was "the" drugstore, full of the Duke students (made us feel as if we were "grown" too). [Side note: Duke freshmen in their beanies and ribbons.] Does anyone remember the Zesto ice cream store beside Sawyer and Moore, to the back of the Donut Dinette? That was the first soft ice cream I'd ever eaten.

Yes. I remember this place.

Yes. I remember this place.

Thanks so much for this photograph. If I am not mi

Thanks so much for this photograph. If I am not mistaken, they glazed the donuts with liquid sugar. Krispy Kreme, at one point, I think, stopped the liquid sugar, and started with sugar mixed with something hydrogenated, to prolong shelf life, when they started to get out of fresh cooked donuts, into retail, (in stores). When they stopped train passenger service in Durham, then stopped it Raleigh, to NYC, we had to drive to Greensboro to pick up the last passenger train to NYC -- that was at, I think, around 3 am departure time. There was a Krispy Kreme bakery there, that was still open at that hour. So before we got on the train we could eat 2 just before leaving.

The heated liquid sugar on the dipped donuts at Donut Dinette, came out of the liquid with a kind of flakey clear glaze. The hydrogenated one's had a kind of white flat glaze. They were just not as good -- and not hot.

Again -- hazy memory: didn't the Donut Dinette have a stainless steel outside, before the stucco?

Does anyone know if Do-Nut Dinette was a chain?

Do Nut Dinette was a chain .Mostly

Do Nut Dinette was a chain .Mostly in NC and VA. similar buildings are standing in Raleigh (sadlaks) and Burlington NC
I thikn they were metal prefab portable units.I think Virginia Beach? is still open

Dated a guy from Duke in the 70s. Our last stop late in the evening was the Donut Dinette. Best donuts in the world! Always sat on the stools to eat them with cold milk. I remember the windows steaming up too. Great memories.

DOES ANYONE HAVE A PICTURE OF