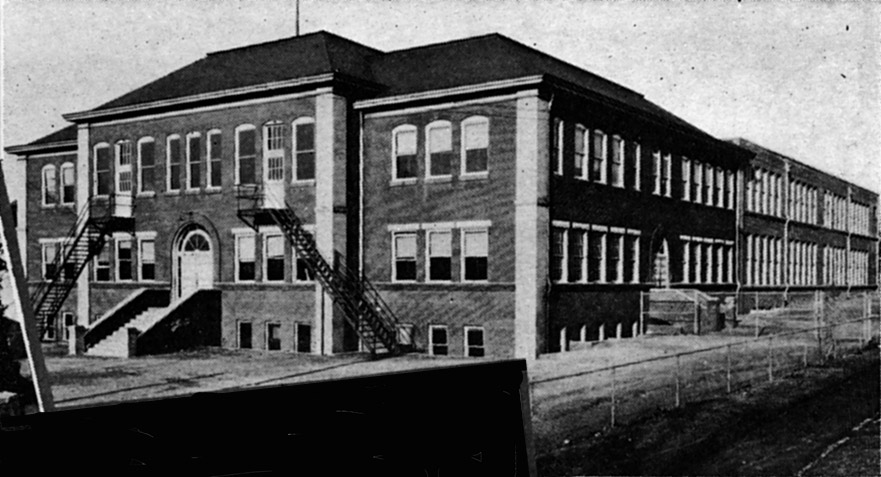 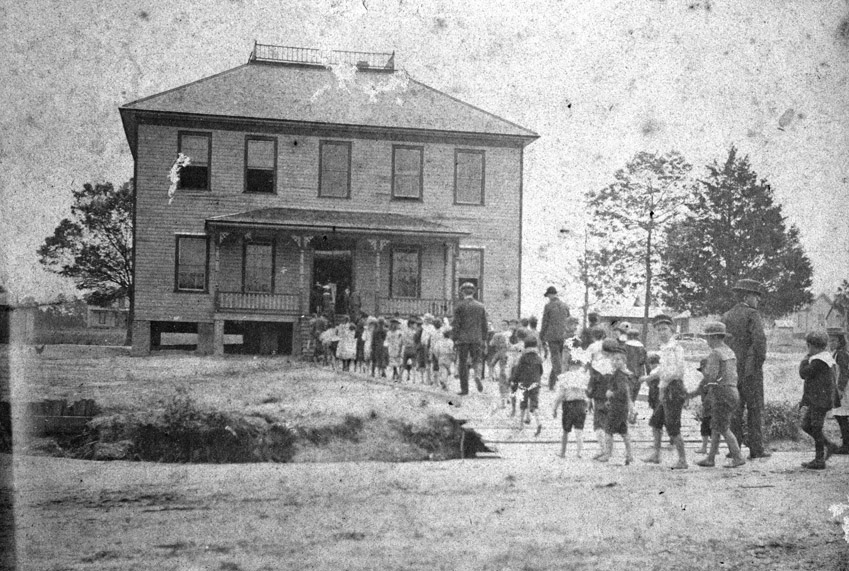 The earliest schools in East Durham were two one-room schoolhouses - one, called the Cherry Grove School, was located near the present-day intersection of Liberty St. and North Driver St. The second was the Oak Grove School, located south of the railroad tracks on the later site of the Durham Cotton Manufacturing Company.

The first East Durham Graded School was built in the 1890s on South Driver Street, just south of East Main Street. The frame structure, pictured above. It contained 7 classrooms and an assembly hall. It was an 8 grade school with a 36 week term. In 1903-1904, the total enrollment was 337 students with an average daily attendance of 192 students. The building and grounds were valued that year at $4000, and the school sat on an acre of land. LH Kincaid was principal, and the teachers were LW Cameron, Bettie Barber, Mary McIntosh, Bessie Proctor, and Zora Habel. Their salary was $34 per month.

In 1905, a special tax election allowed the school to expand to a nine month term with five teachers paid $45 per month; it had "one grade of high school"

In 1909-1910, the original school building was replaced by a new masonry brick structure, designed by Fred Githens of New York architectural firm Tilton and Githens. Githens also designed the West Durham Graded School No. 2, completed in 1912. The two schools bore a strong resemblance to one another. The new building was complete in time to be occupied during the 1909-1910 school year. 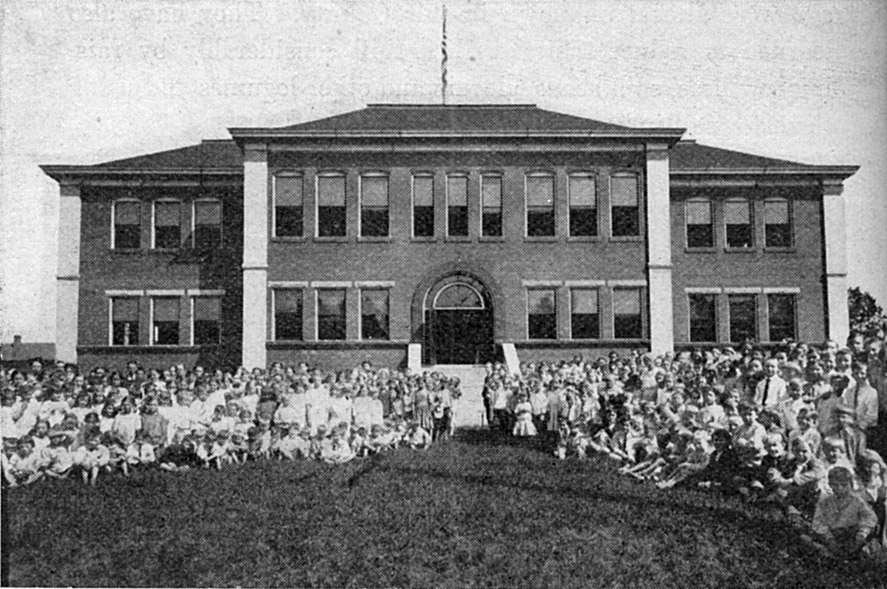 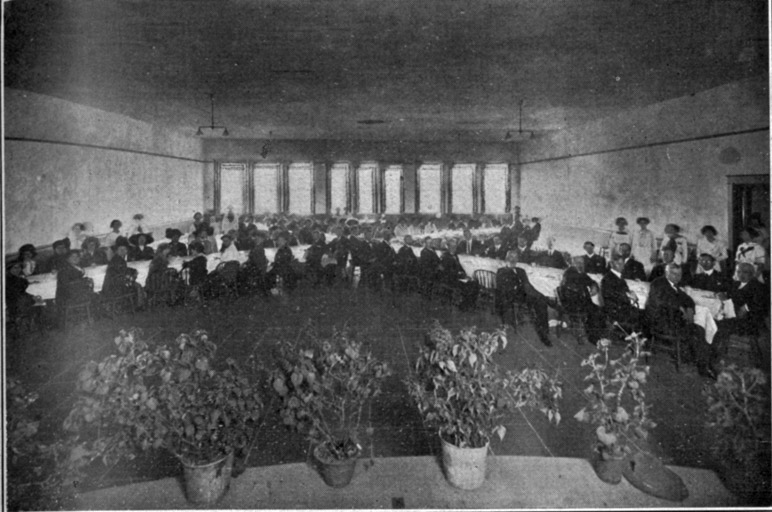 In 1913-14, the Graded School added 3 grades of high school, allowing students to graduate with a high school diploma - the average daily attendance was 421 students. 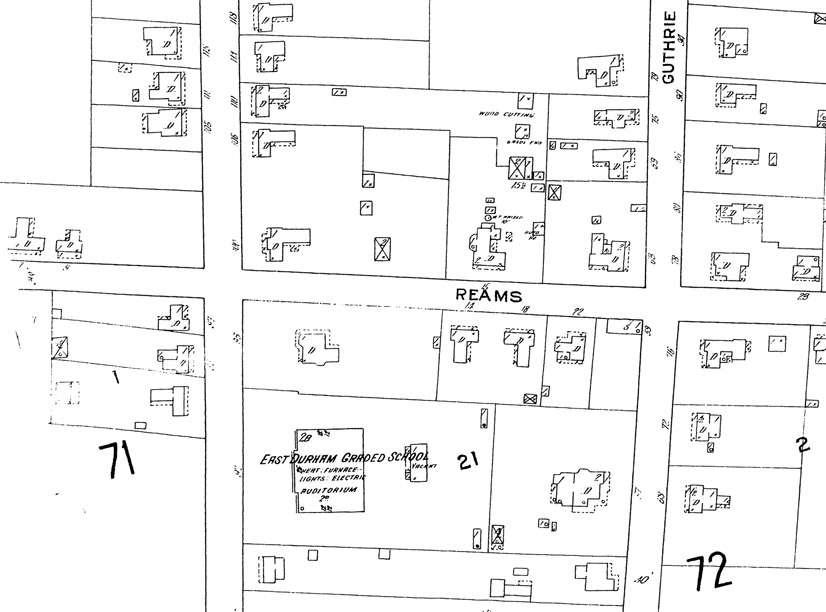 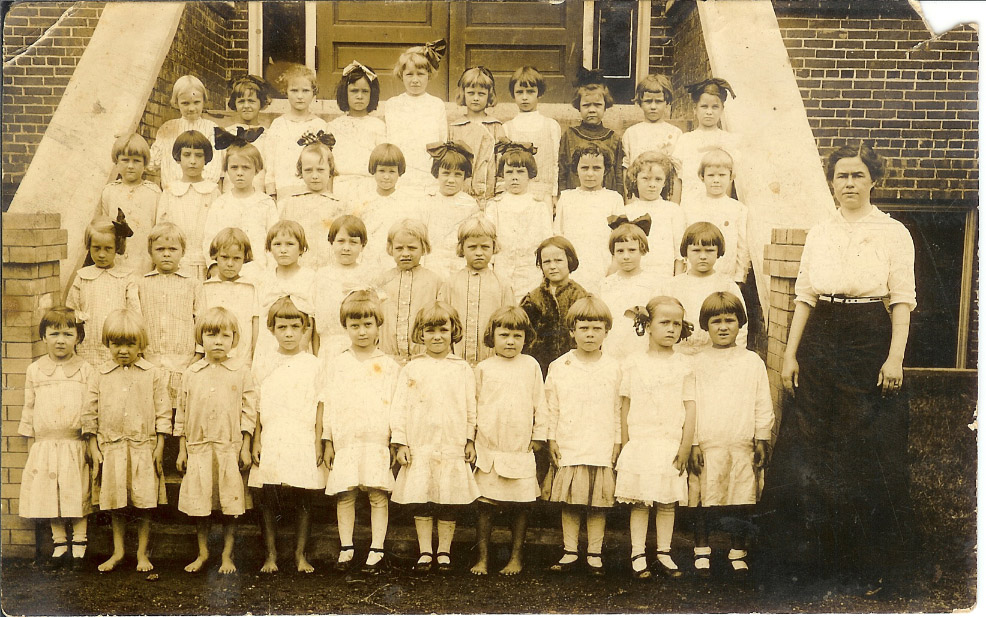 Graded School class 1915. What struck me most about this picture? The feet.

In 1920, two wings were added to the rear of the school, extending it to the east. Likely at some point soon thereafter, the space between the wings was infilled with a gym / auditorium, although the gym, with its pitched roof, looks as if it could have been a separate structure from the main building - built between 1913 and 1920 - and connected to the main building by the flat-roofed wings in 1920.

In 1925, East Durham was annexed by the City of Durham. The East Durham Graded School then became known as the Y.E. Smith school, so named for the former chair of the school board. Thirteen students, the last to receive their high school diplomas from the school, graduated in 1925.

The school is noted as the East Durham Junior High School on the 1937 Sanborn Maps; because there is no other clear elementary school operating in East Durham during that period, my guess is that the school served as elementary and junior high, during the late 1920s-1930s, with students heading to Durham High School thereafter. 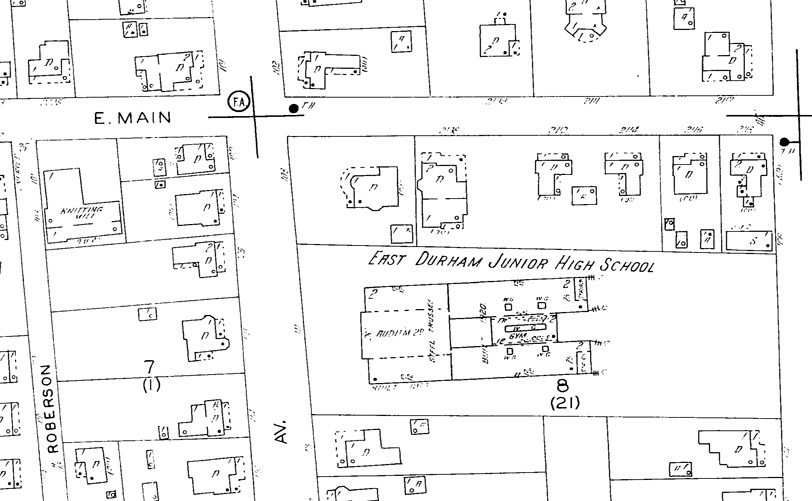 By the time the new East Durham Junior High was completed on North Driver Street in 1939, the school had become an elementary school, known as the East Durham Grammar School or the YE Smith School 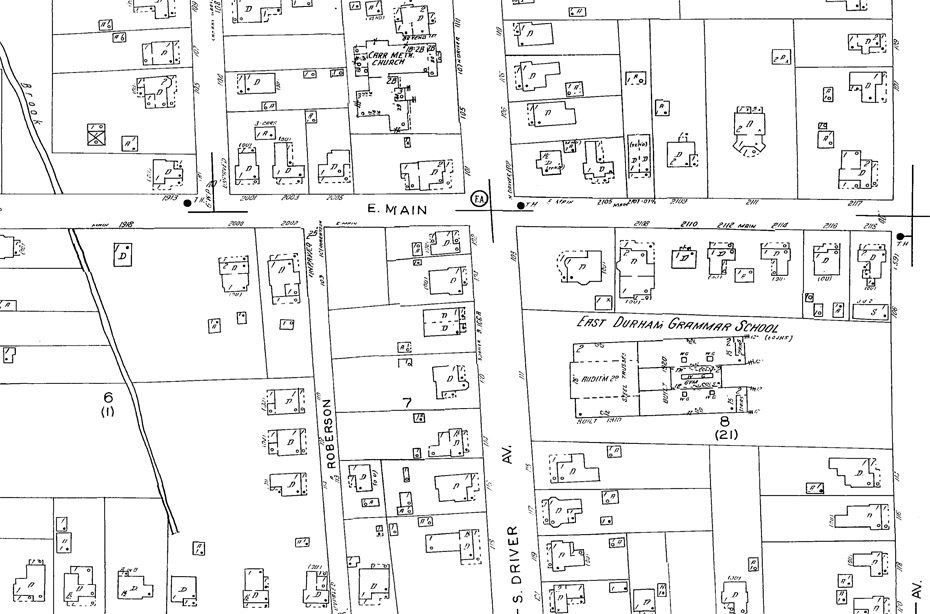 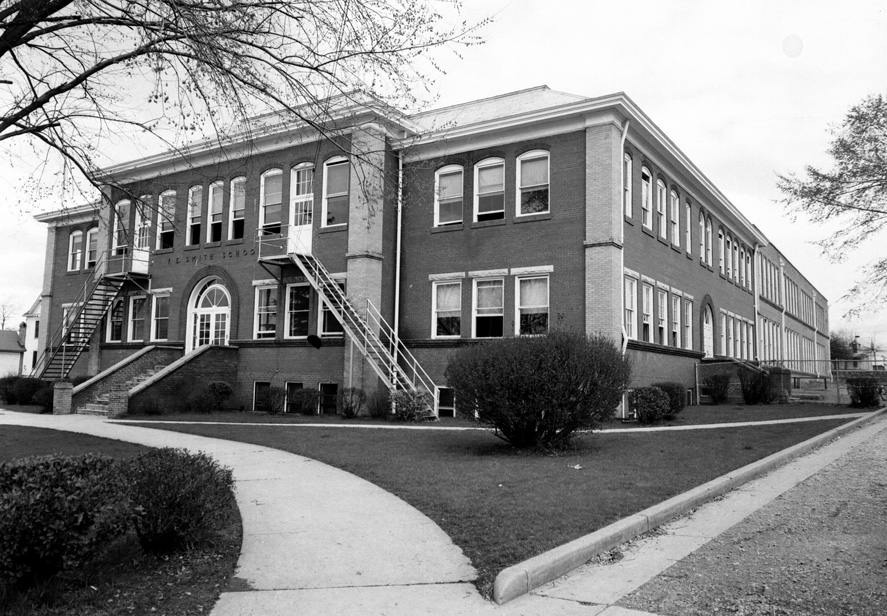 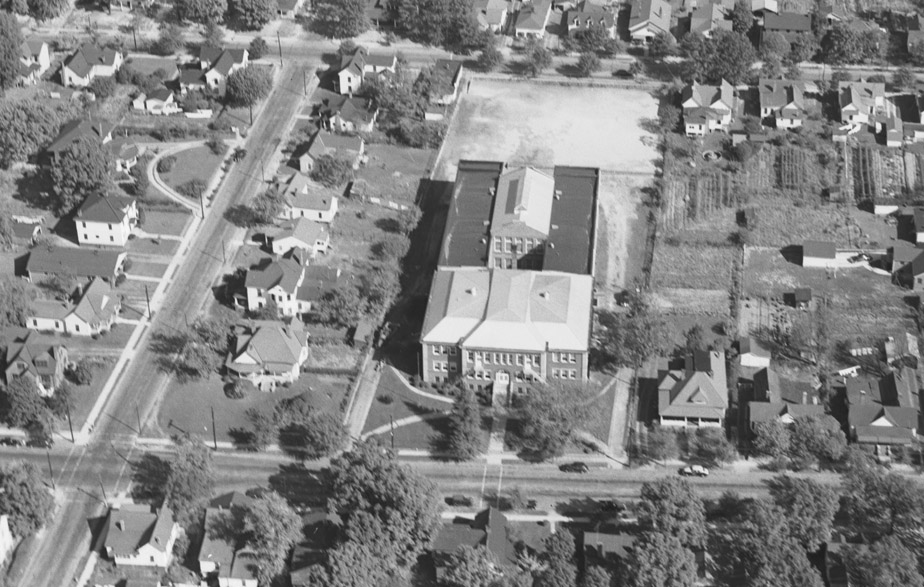 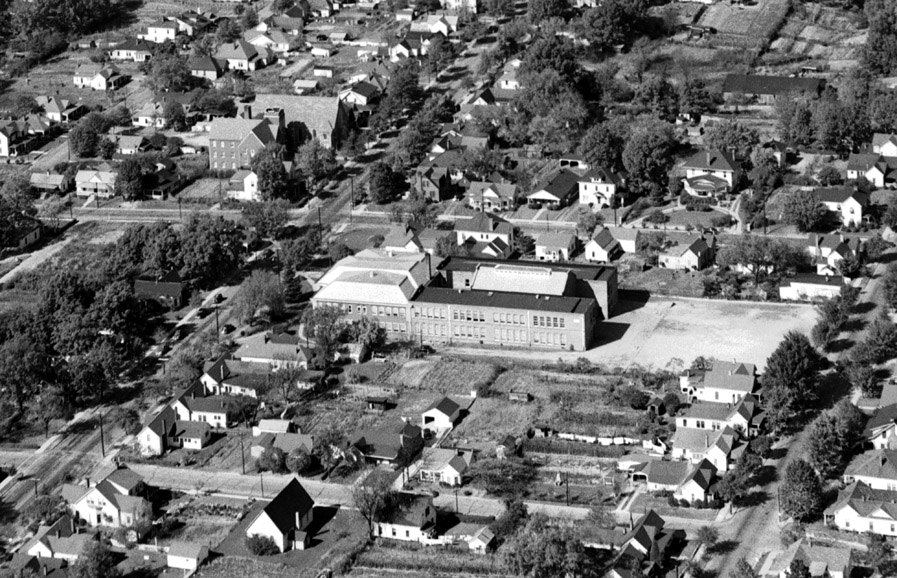 In 1967, a new YE Smith elementary school was constructed several blocks farther to the east on East Main Street, and this structure was decommissioned as a regular school. It was repurposed as a school for handicapped children 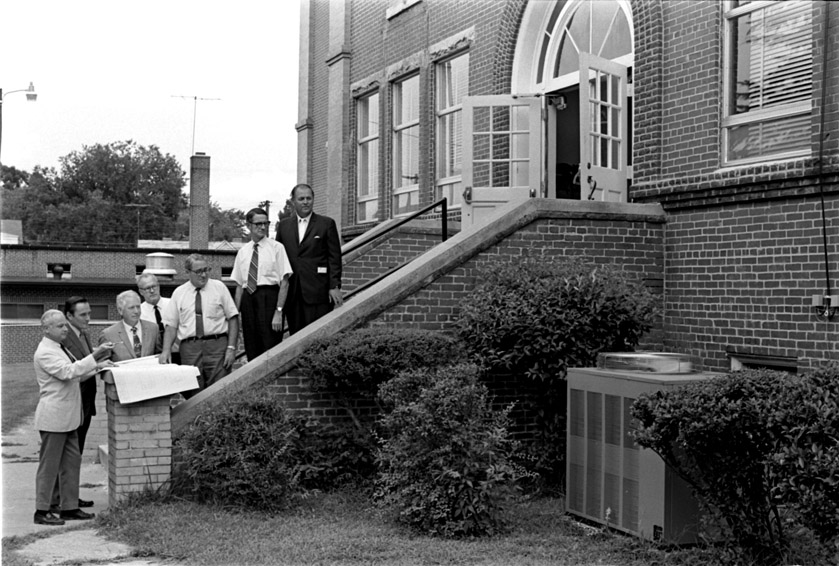 By 1980, the historic inventory notes that the building was being used by a "sheltered workshop operated by the Durham Exchange Club."

The Exchange Club continued to own the building until 1998, at which point they sold the building to TROSA. TROSA intended to renovate the building as a residential structure, but ultimately found that they were unable to execute the renovation. Preservation North Carolina has had an option on the purchase of the building since 2008. 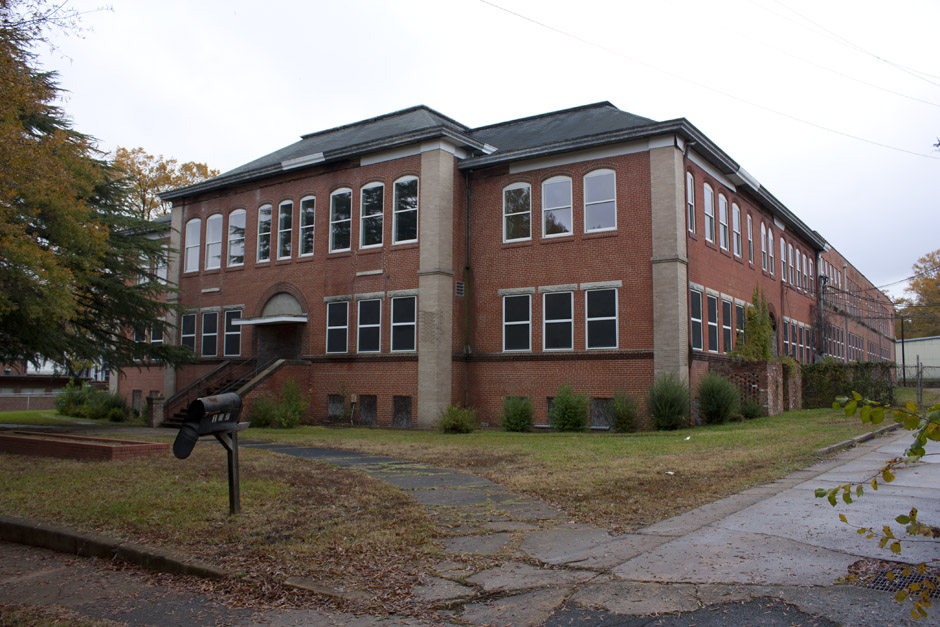 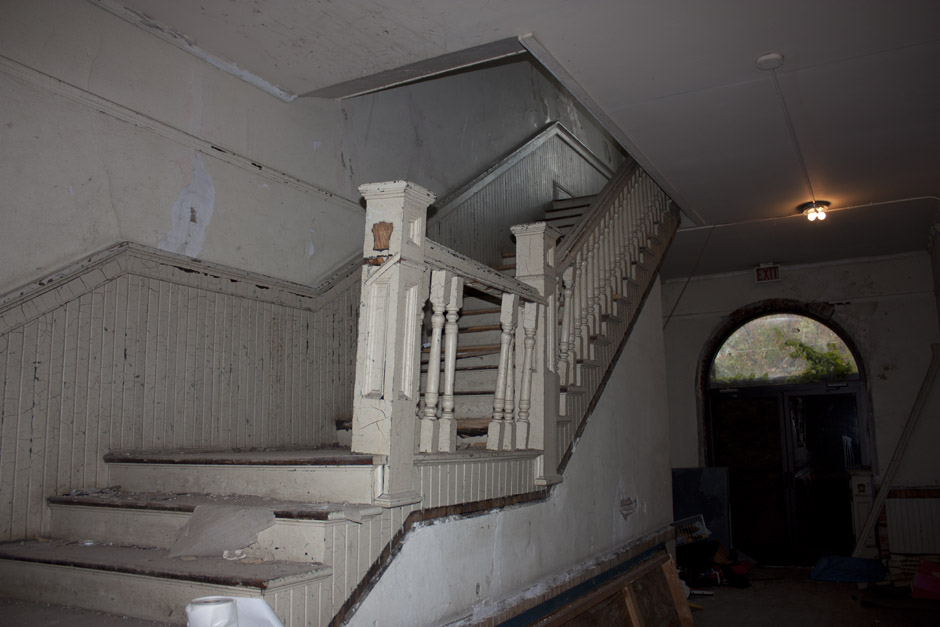 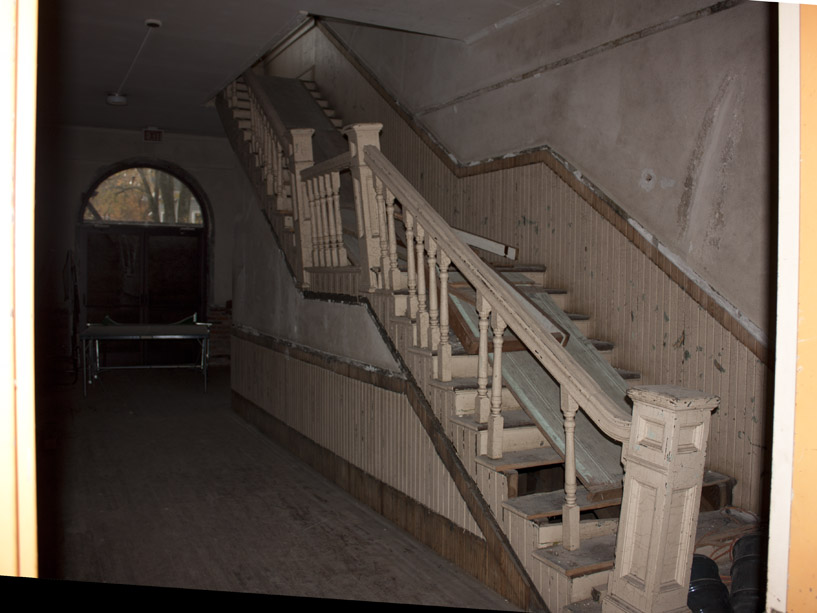 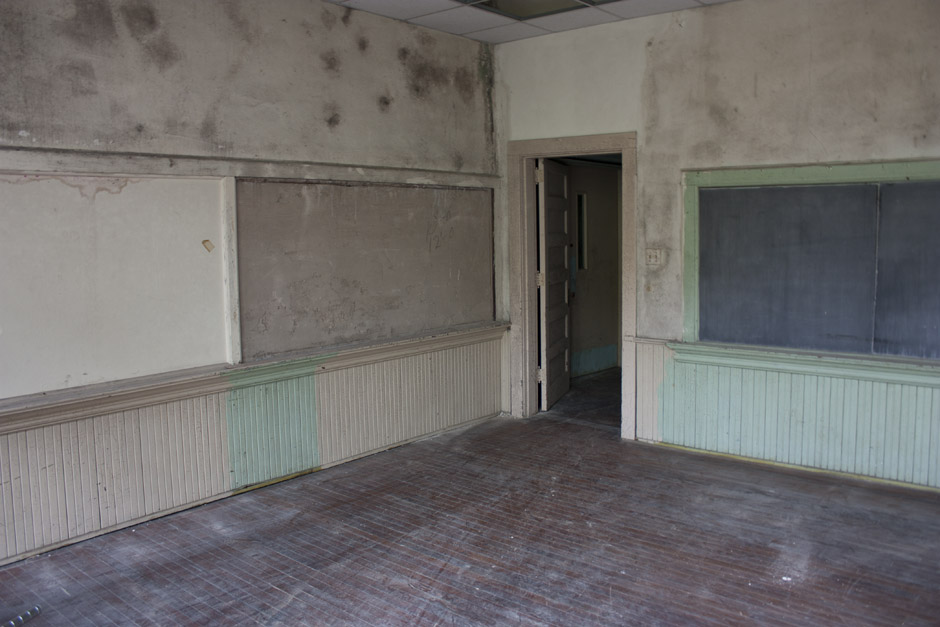 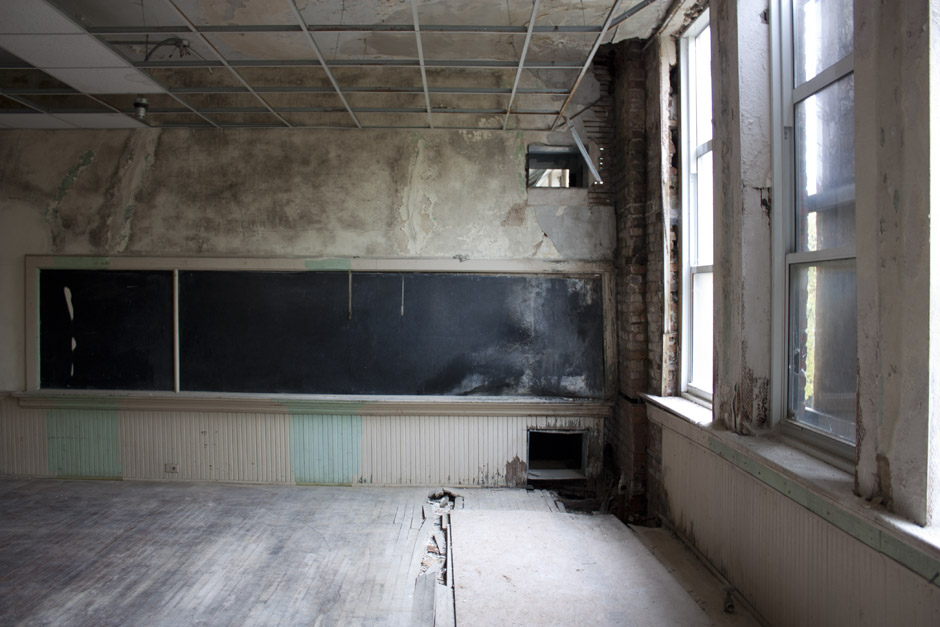 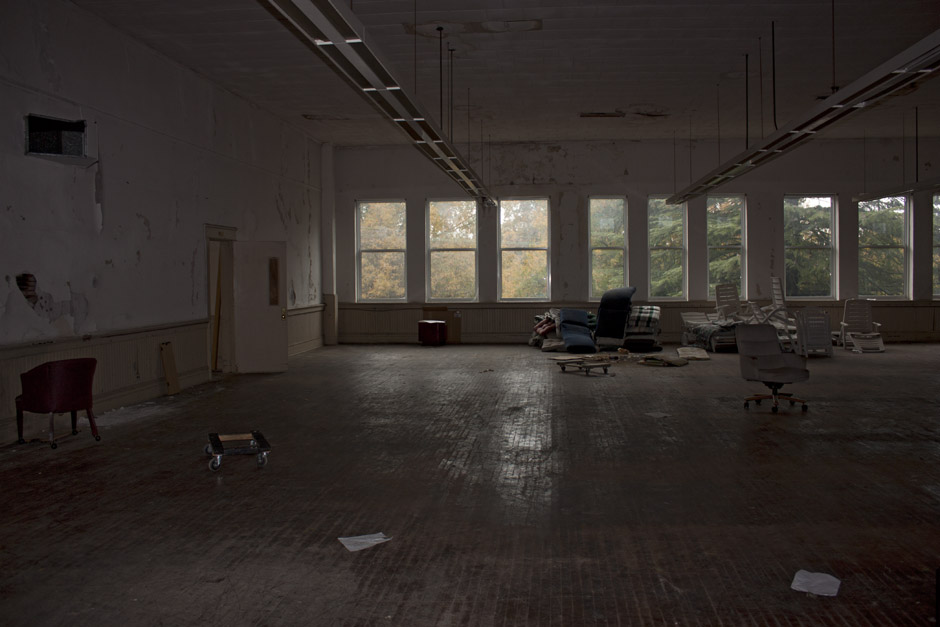 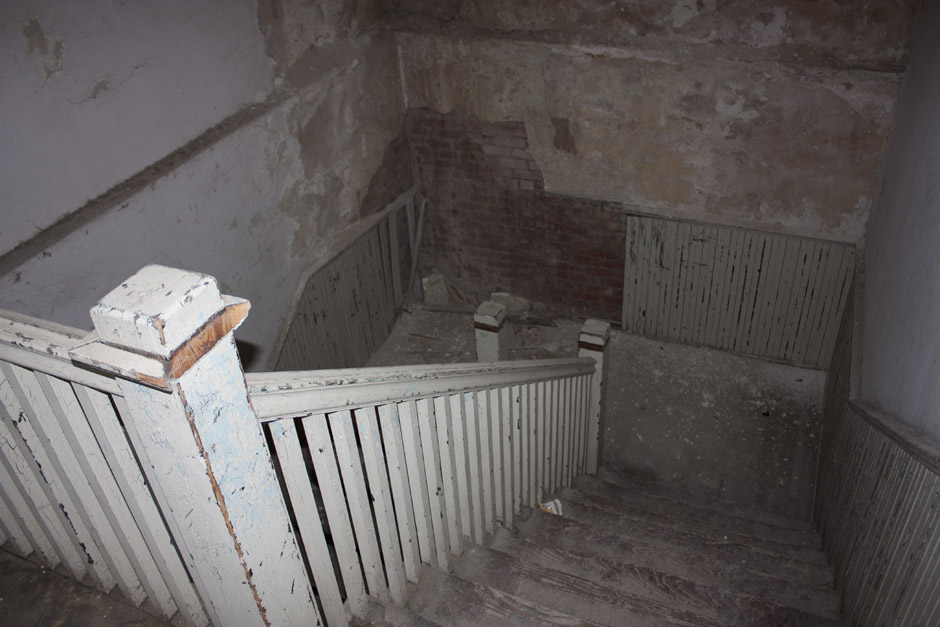 As of early 2011, Self-Help has a contract on the property. They plan to purchase and completely renovate the school building to be reactivated and become - a school again. The amusing part about it (amusing since I'm not the one having to go through it) is that Self-Help actually needs to rezone in order to put a school back in the school building.

The school is the Maureen Joy Charter school, currently located on Cornwallis Road. I'm no expert on schools, and I'm not too interested in a discussion of the relative merits of one school versus another. But from what I read online, it appears that Maureen Joy is well-regarded and will be a strong asset to the area by relocating to East Durham.

That has the potential to bookend what I consider the critical area of stabilization for East Durham - South Driver at Angier to South Driver at East Main. As a large, persistently vacant property, the school has brimmed with potential - but has also been a sign of disinvestment. Revitalizing the oldest school building in the city, bringing the activity of kids and parents to South Driver Street, and creating a strong asset for residents of East Durham in providing a neighborhood school is a win-win-win. 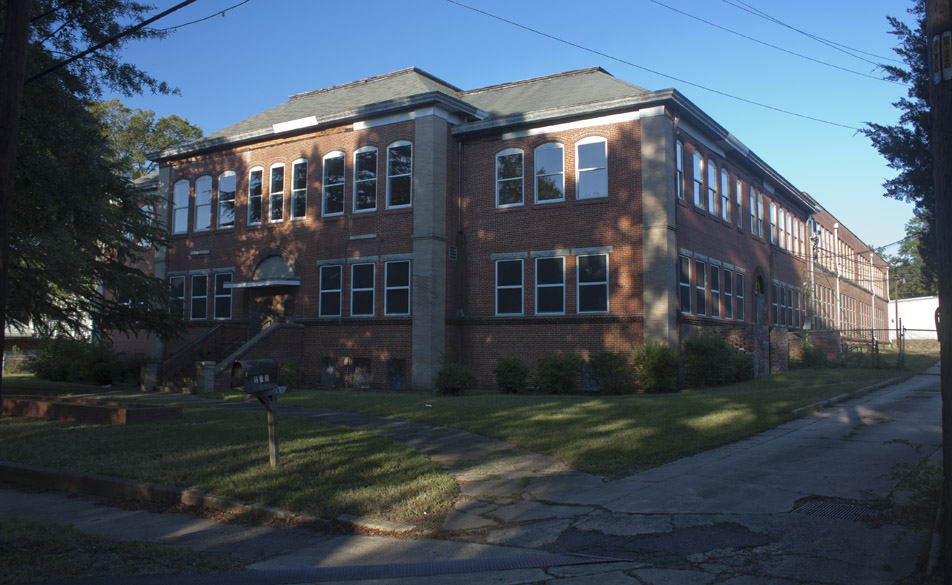 Very interesting pictures of the inside! I've always wondered what those older school buildings looked like on the inside!

The inside actually looks

The inside actually looks pretty impressive! I can imagine taking those classrooms and splitting them up into individual units for rentals/condos or even small offices...They can look pretty amazing with the wood floors, wainscoting, big windows, exposed ceilings, and even save the original chalkboards for a fun, unique feature!

I lived on Cherry Grove

I lived on Cherry Grove Street and went to Y E Smith and East Durham Jr High in the early 50's.  I have always wonder how this one block street got its name.  Now, I assume that it was the link to the Cherry Grove School before the ball field was established.  I have never heard of this school until I saw the name on this page.  Does anyone have any additional information about this school?

I lived on Cherry Grove

I lived on Cherry Grove Street and always wonder how it got the name. Apparently it was the street that went to the Cherry Grove School.

One of the advantages of

One of the advantages of working for a plumbing company is having the opportunity to visit job sites.  The building has been cleaned out, abatement work is done, and now comes the work of putting it all back together.  The full basement is a great space too.  CT Wilson is the General Contractor and Acme Plumbing is installing the new drain system. 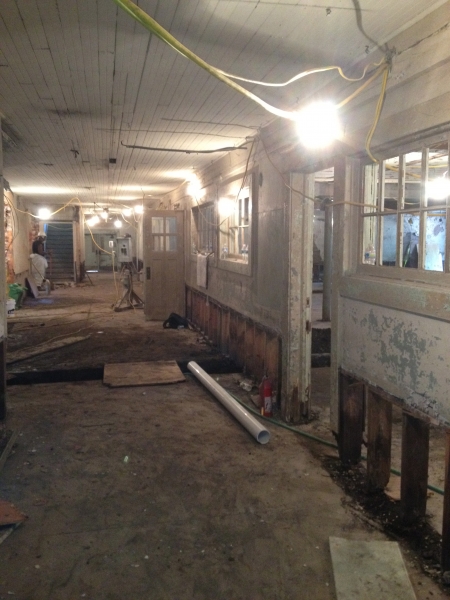 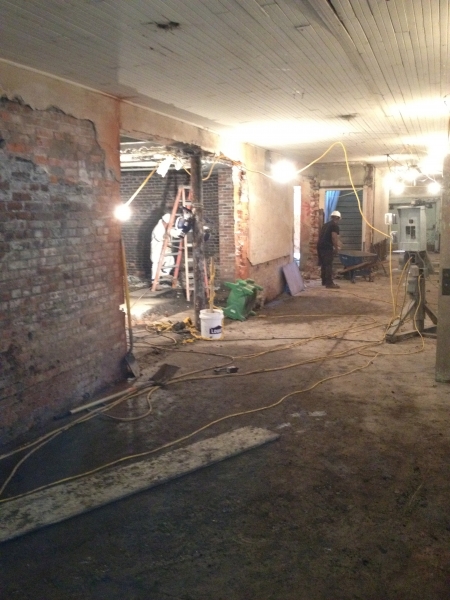 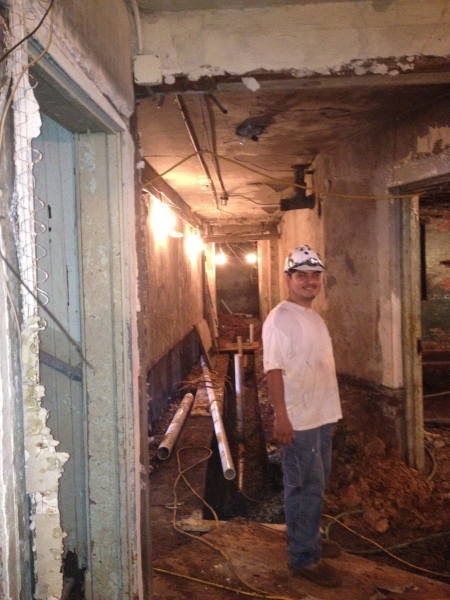 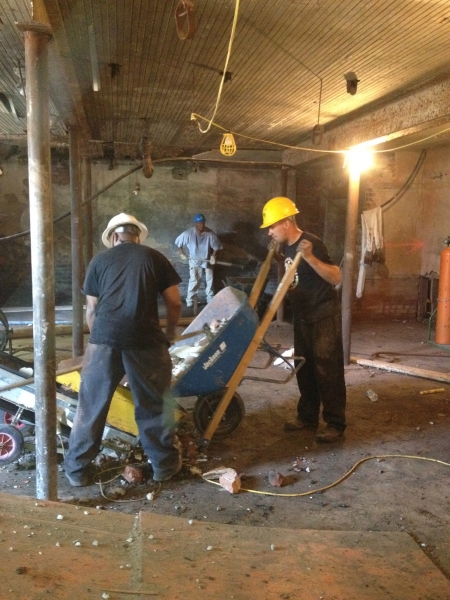 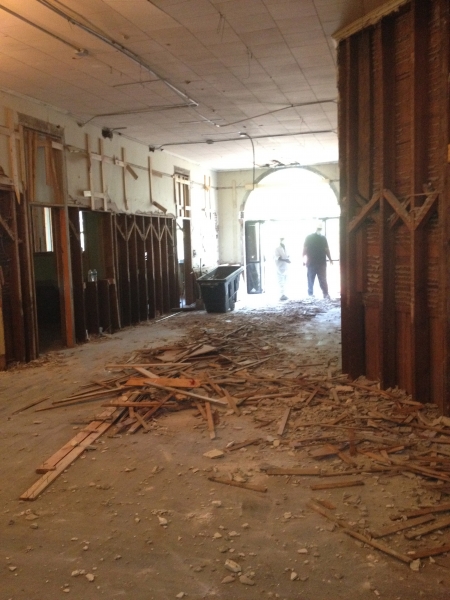 I was looking for anything

I was looking for anything old durham, and I lived on trinity in a BIG ole victorian, and the first year they bussed, I came to this school an I adored this school and was in total oblivion as to what was the bus thing everything was speaking of....i adored everyone and I never loved a school so much....I worked in the library and was a happy camper the pictures ....the OLD picture were incredible. wow. my mom was born 27' I moved to texas after this so i went to several 2nd grades...Thank You So Much Having Such Lovely Memories AND KINGS HOT DOGS TOO? WOW!!!!
JULIE

With some other people from

With some other people from East Durham, I took a tour of this building last Saturday afternoon. Dan Levine from Self-Help Credit Union, Alex Quigley from Maureen Joy Charter School, and Charlie Wilson from CT Wilson Construction Company led the tour. Wow. What an impressive building. It has great bones, and the people involved are going to do an historically sensitive restoration that will make it the most beautiful elementary and middle school in Durham. The class rooms have very high ceilings, large windows, and wood floors. The details are wonderful: window mouldings, arched doorways and windows, staircases and newel posts. I cannot wait to see it when it's finished.

BTW, Charlie Wilson told me a funny story about Gary Kueber. But that's for another time. . .

I am working with the Museum

I am working with the Museum of Durham History on a project in East Durham to find out of the box ways to get local kids (and adults) interested in the history of their neighborhood.  I had a meeting this AM @ Maureen Joy (to brainstorm ideas on how to get more local history added to the curricula) and was lucky enough to get a sneak peak at how far the renovations have come! They are starting to load up the classrooms and decorate the bulletin boards. Apart from little finishing touches, they are set to open!  They've really done a beautiful job and you can tell a lot of care was taken in the work. They saved quite a few great historic elements yet added modernity where it was needed. There are great little pops of color everywhere too. It's quite lovely! It was very easy to image it is it was a hundred years ago.

The floors were in really great condition for the most part.

Stage in the Assembly Hall:

"because there is no other

"because there is no other clear elementary school operating in East Durham during that period, my guess is that the school served as elementary and junior high, during the late 1920s-1930s, with students heading to Durham High School thereafter." --- Correct. My mother and all her siblings save the youngest attended grades one-nine here before enrolling at Durham High School. Wonderful site about this school, thank you for putting it together!