As the West End developed along West Chapel Hill St., two commercial areas developed - one of the two was located at Vickers Avenue and West Chapel Hill St., the intersection between the main street of the West End and the main street of Morehead Hill. A set of early masonry structures was built here around 1910, probably replacing earlier frame structures. The remainder of the block, to the west, formed a residential buffer between the businesses and the 2nd Baptist (Temple Baptist) Church at Shepherd St. 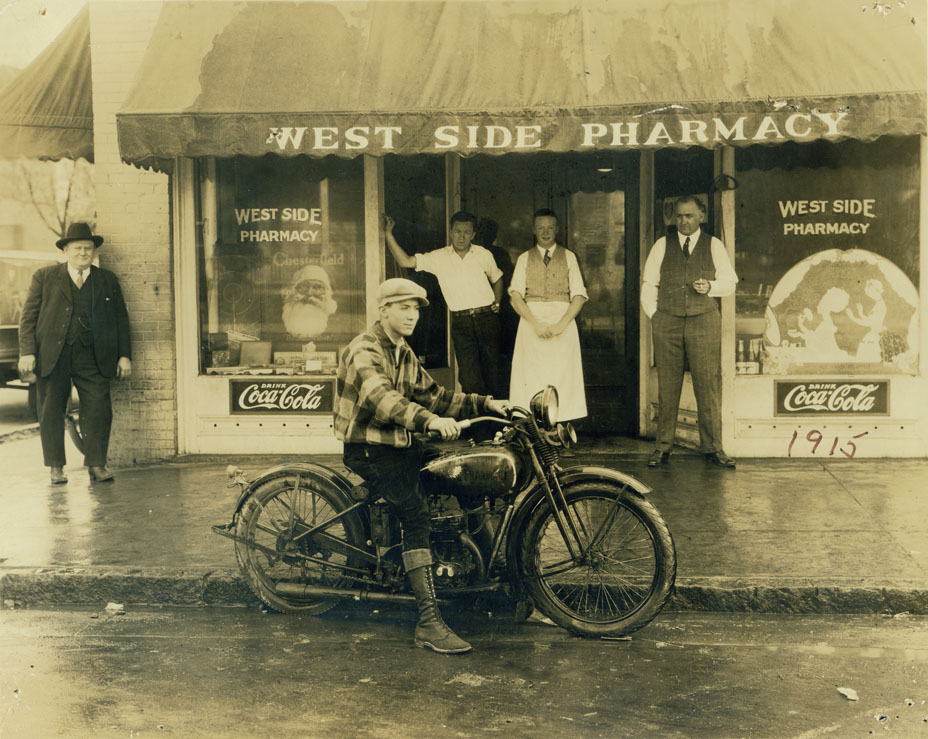 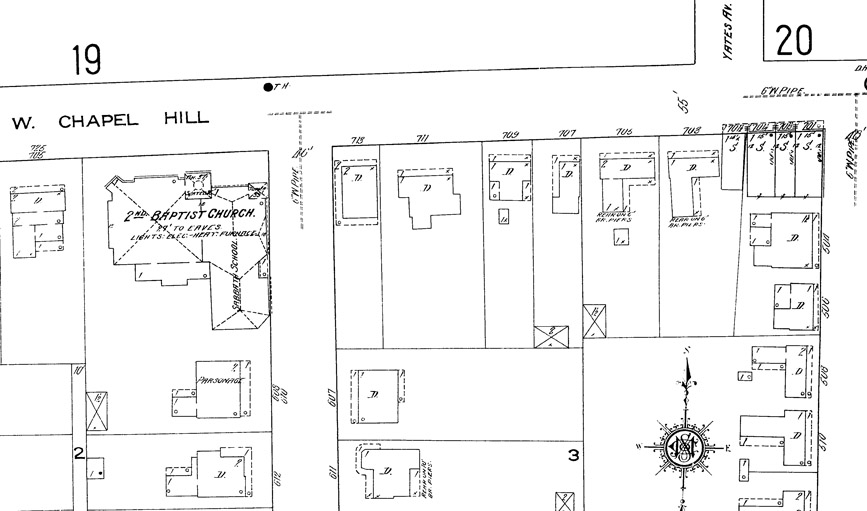 Sanborn Fire Insurance Map of the block from 1913 shows the commercial area and residential structures.

By mid-century, the remainder of this block had become commercial. 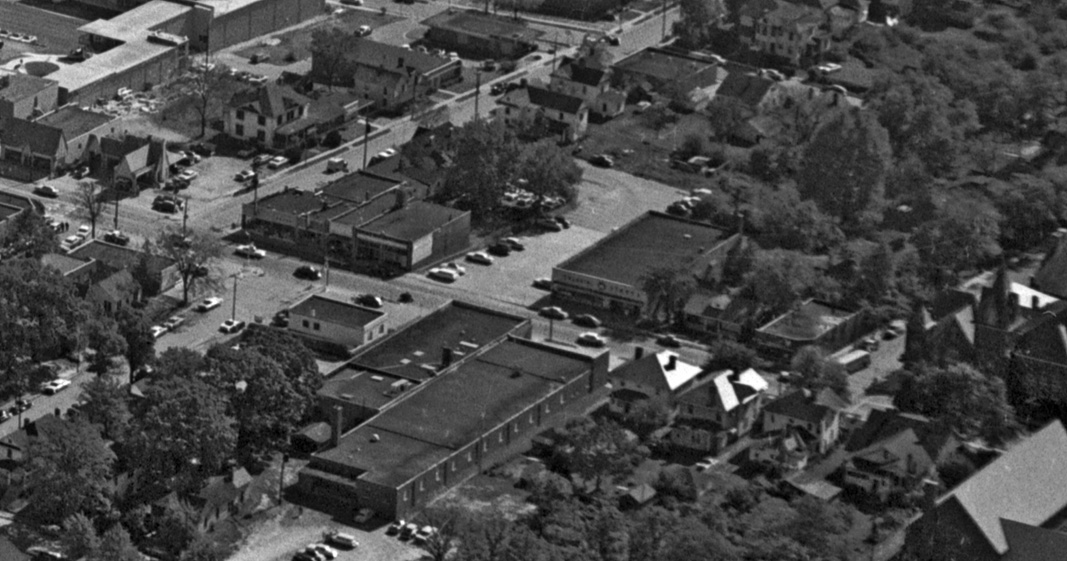 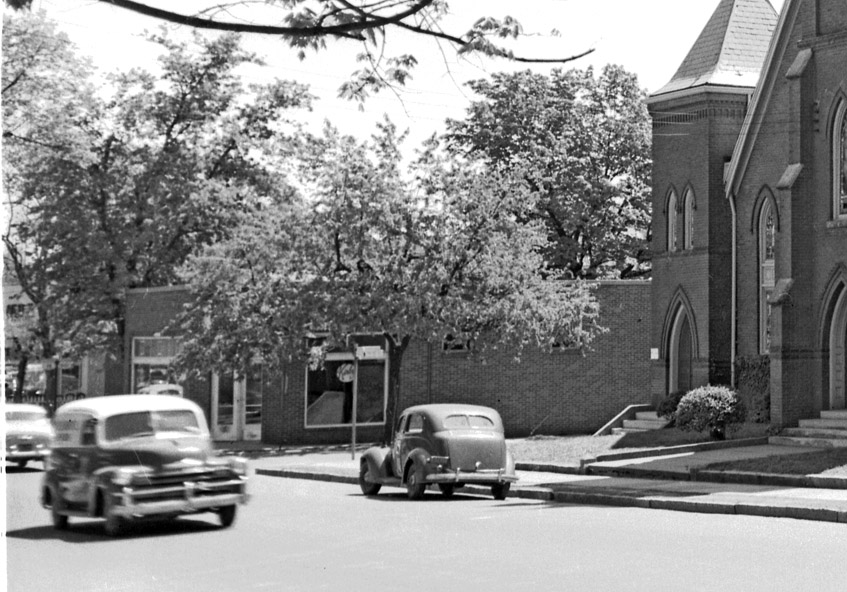 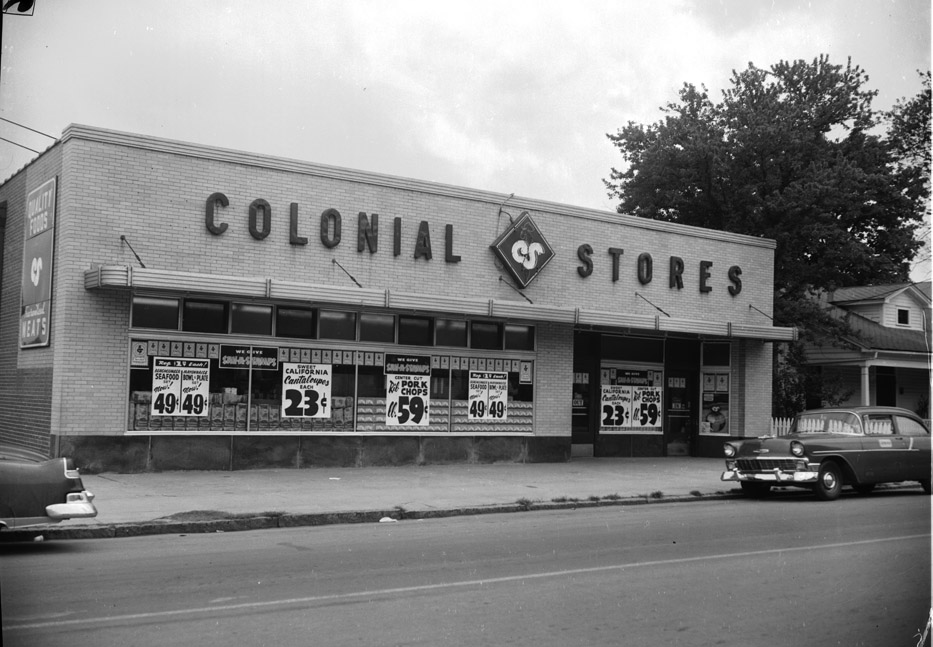 In 1967, the freeway would be plunged through this part of the neighborhood, removing this block. 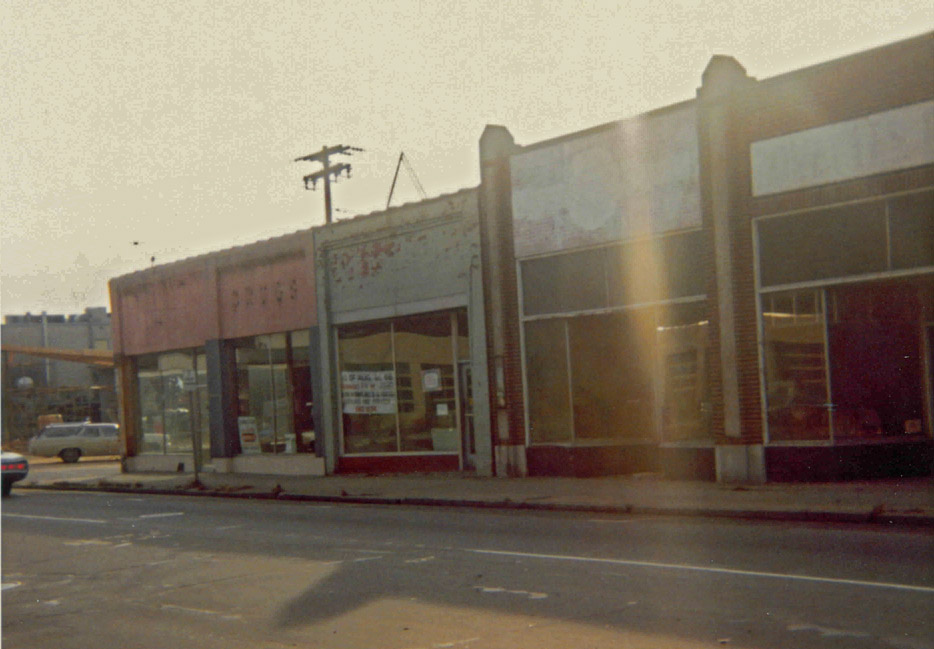 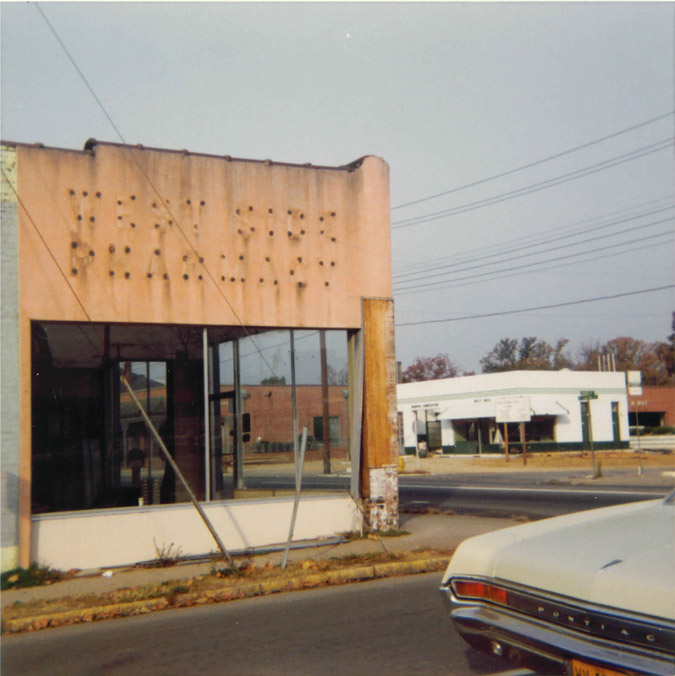 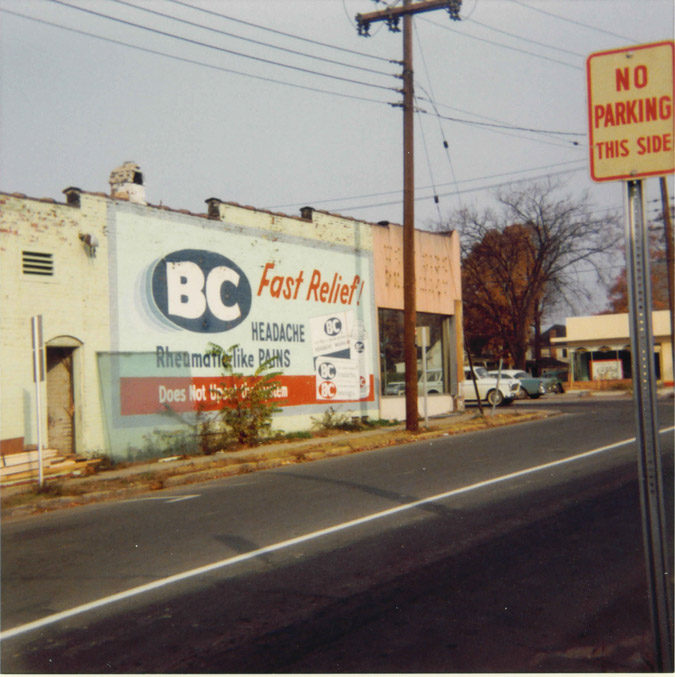 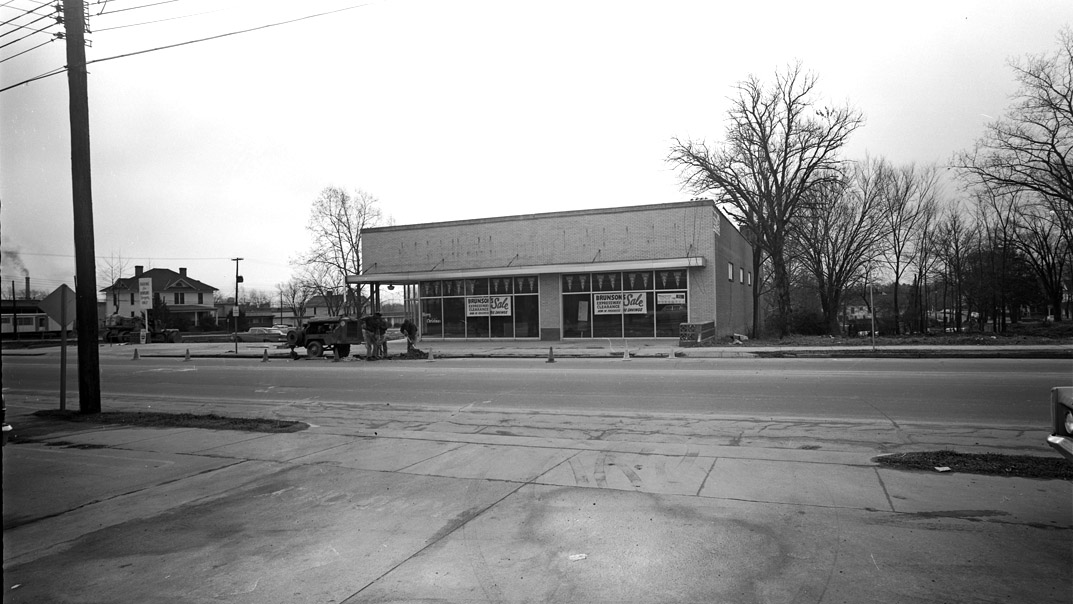 Looking south from the north side of the 700 block of West Chapel Hill, 01.05.67 - the former Colonial Stores supermarket - by this time a Brunson's store (Expressway Clearance Sale...) remains, while the structures on either side have been demolished. 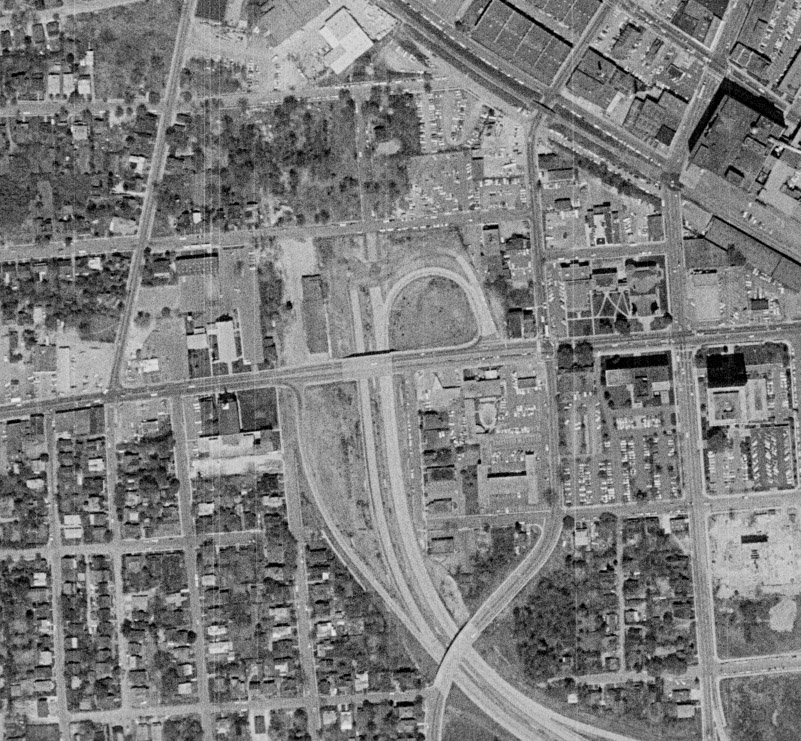 The Freeway at its 1972 western terminus, West Chapel Hill St.

And the view of the south side of the 700 block, present day.

I profiled the West Chapel Hill St. bridge and just what a blight it is on the west side of town in December of 2006. Roads and interchanges don't have to be this bad, and I profiled what an innovative city did with their interchange to turn it into a streetscape - The Cap.

This coincides with my general growing annoyance with the charrette model of community involvement, which has become ubiquitous. It seems like a great model for planners, or consultants to come in and be all cheerleader-y as they pose questions to the public and tell them to dream big, but in reality, it avoids dialogue. The public feels involved because they create and dream and get their ideas down on paper, but whoever facilitates these things takes the ideas back to the office and edits them down to what they feel is important - without ever saying in a meeting "well, that's a crappy idea - we're never going to do that." They thereby avoid confrontation. The dismissal of this idea - by demeaning it but not saying what it is - is one example. I felt similarly about the downtown master plan - how did the east side of downtown completely disappear from the 'focus areas' when it was a focus area on every single sheet displayed at the session I went to?

But back to West Chapel Hill St. - this bridge is a moat between the West End/Burch Avenue and downtown; once it was a part of the West End, in the middle of the neighborhood, and part of the trolley route connecting downtown with Lakewood Park down Kent St. It could be part of that connection again.

Amazing pictures this past

Amazing pictures this past week - many thanks from SWCD.

I second your call for critical and continued reassessment of both the methods and the results produced by the current "charette model" - this topic deserves its own post.

Perhaps you could add the 1972 aerial of 147 and WCHSt - I find that snapshot in time very compelling.

Having been at the W. Chapel

Having been at the W. Chapel Hill St. charette, I completely agree with the frustrations of the model, but I can say pretty clearly that the failure of the Cap idea to catch on had more to do with the participants and less to do with the planners.

In my group, I was leaning hard on the idea of the Cap, but was brushed off by residents of the West End and Burch Ave. repeatedly. While drawing up pictures of a Zocalo on the site of the old convenience stores, complete with expensive pavers and arches and flowers and what not, I was told that the Cap was simply too expensive and would never happen. Aside from that, a couple of folks, none of whom lived near where the Cap would be, said that the neighbors there would oppose it because it would inevitably bring The Evil Density.

Unfortunately, the dream of a revived W. Chapel Hill St. district is going to stay just that -- a dream -- until something changes. In the analysis I've done about the Durham Food Co-op and such, I come to the same conclusion that many others have, including a group from the Fuqua School of Business at Duke that looked at it: a grocery store that depends at all on pedestrian and nearby traffic simply can't survive there. Aside from the remnants of the northwest end of Morehead Hill, the West End, and Burch Ave., none of which have very many people in them, the co-op is surrounded by cemeteries, empty land owned by Duke around Campus Drive, 147 on two sides, the railroad tracks, and the giant parking lots around DPD and NCML. It's a wonderful combination now of low and scattered residential density with massive impediments to pedestrian movement.

the shot of the guy on the

the shot of the guy on the motorcycle in front of the pharmacy is awesome.

Thanks Greg - I was happy to

Thanks Greg - I was happy to be able to place this photo after some digging in maps and directories. The photo belonged to SE Rochelle, who had a few gun, motorcycle, and bicycle shops located downtown - which I've previously profiled. He's the larger guy leaning up against the corner of the building.

While on the topic, it would

While on the topic, it would be great to have access to all of the supporting documents and drawings that went into the condensed final plan. I understand the need for a "summary", but then again, the summarizing process is not done by the residents and can't be expected to reflect a universal consensus. I think every charette summary should be accompanied by the entire collection of primary research and community input. This could improve the quality of knowledge-based decisions drawn from the charette process. And, unless this is the final opportunity for citizens to ever have a voice for what happens here, which of course it shouldn't, then I imagine that the primary data would be of far greater utility for maintaining momentum than would the singular and rather artificial vision represented in the final summary. Thankfully an earlier draft of this final document did indeed include 4 appendices with much of the original data. Hopefully these will also become part of the permanent public record.

Regarding the cap, I think it's safe to say that the record would show the individual determinations that a "cap" over 147 would be "too expensive" were not made by expert economists nor based on even a glimmer of understanding or imagination about how such an inspired proposal could actually be achieved. Thankfully we have ED and GK to help continue the dialog.

Do you know what happened to

Do you know what happened to the WCHS plan? The time line I remembered from the May meeting involved a June meeting in which EG&G would discuss the "first draft" of the plan, with a "final draft" done by January. I haven't heard anything from the city about it since early June, when they circulated the minutes from the meeting.

Here's a (8/20/08) update for Rob and others - the city just sent out a news release advertising the next "streetscape design community meeting" for WCHSt., which will be at the Lyon Park Center, 1313 Halley Street, Durham Tuesday, October 14, 2008, at 6 p.m.

(Interesting to me and maybe to others who have been involved with these meetings and with SWCD-QOL, the description of the western boundary indicates that it has changed again back to the Kent Street intersection.)