So I decided to post on 320 and 322 East Chapel Hill St. separately, primarily because I lacked 'before' pictures that I was satisfied with, and my current day picture wasn't much better.

Here is the best, tight-ish shot of 320 East Chapel Hill St. I could find - the second building from the left.

And here is the same partially-obscured shot from the post on 322, looking southwest.

I'm a fan of buildings that have the build date nicely emblazoned in the masonry - very convenient. This one has "19" on the left side and "23" on the right. The above photographs were taken 11 years later, in 1934.

I don't know the early tenants of this building. By the 1960s, Center Furniture was located here, and they applied the omnipresent flat-front false facade over the front. 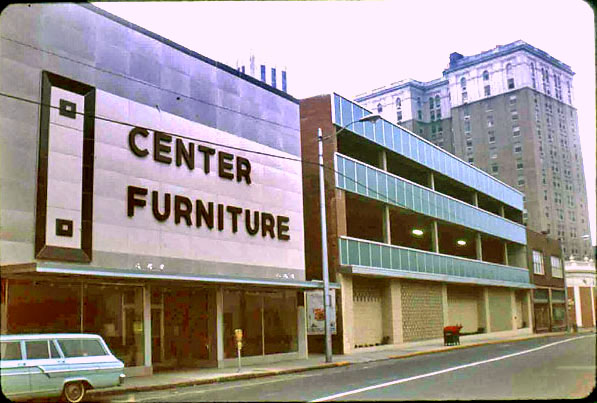 About 3 years ago, it seems, the false fronts were pulled off of both 320 and 322, eliciting great hope of revival - which hasn't happened. It appears that the interesting double-curves at the top of the facade were rudely chopped off in the all-must-be-rectilinear 1960s.

What is interesting is that since I posted on Empire Properties and these buildings last week, there has been a change at 320.

~10 days ago, the shot I wasn't satisfied with: 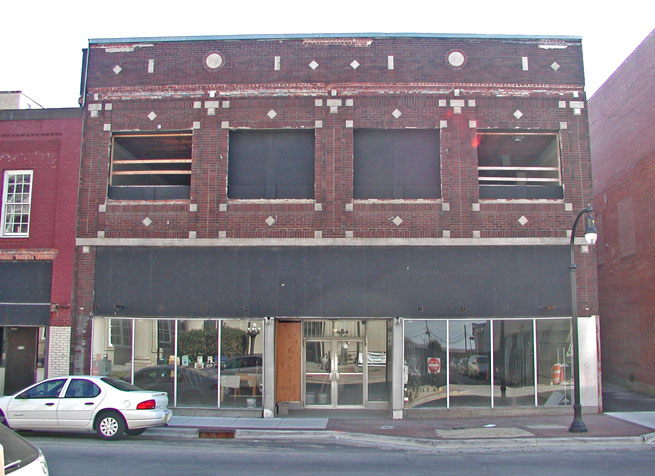 And this past weekend. 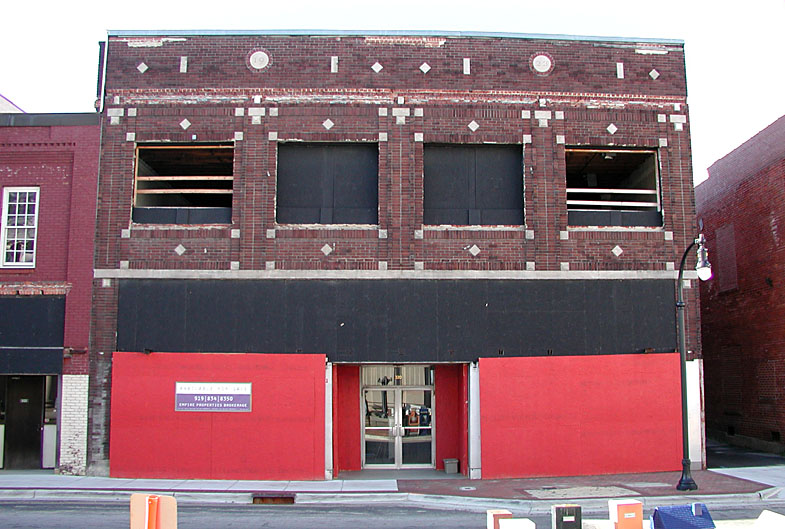 Guess who got some fancy red window covering and a "For Sale" sign last week? 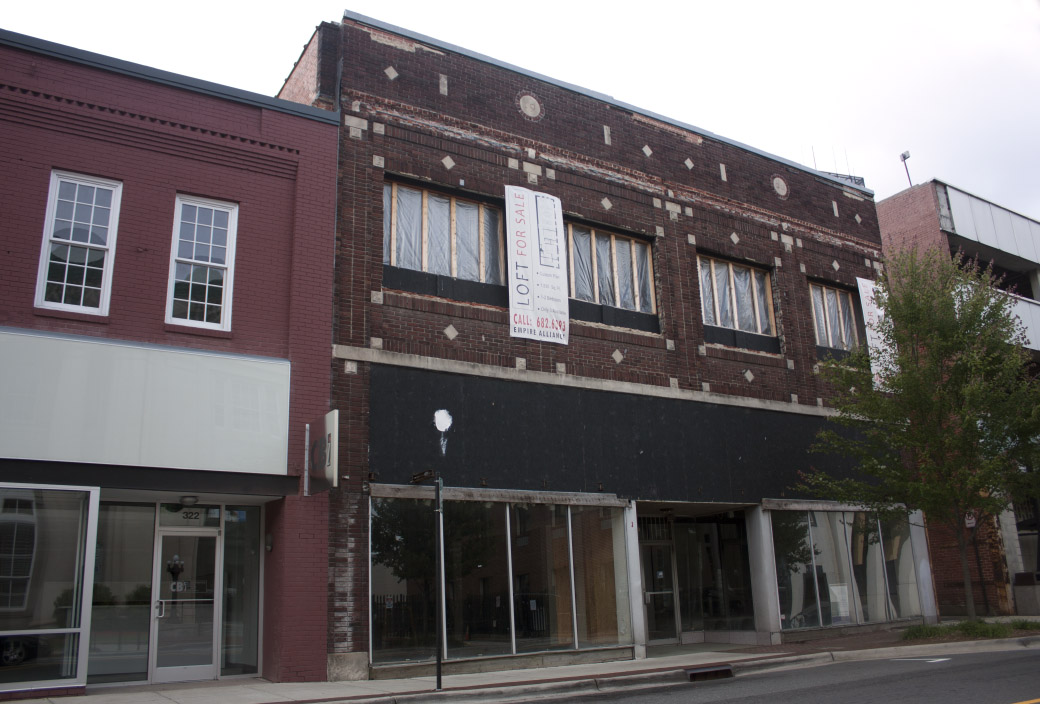 In early 2012, a restaurant called "Alley 26" (for the awesome alley that runs to the west of the building) was announced and was under construction as of July 2012. 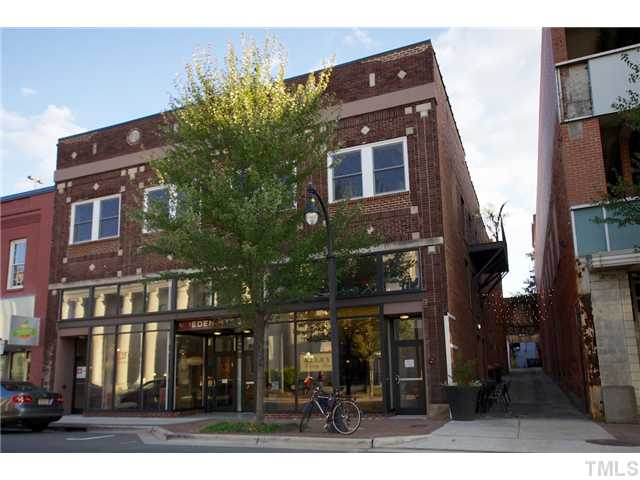 As of 2014, the downstairs bays are occupied by a modern furniture store and a bar. The upstairs has been converted to for-sale condominiums. Below, a sample view of one of the condos from the triangle MLS. 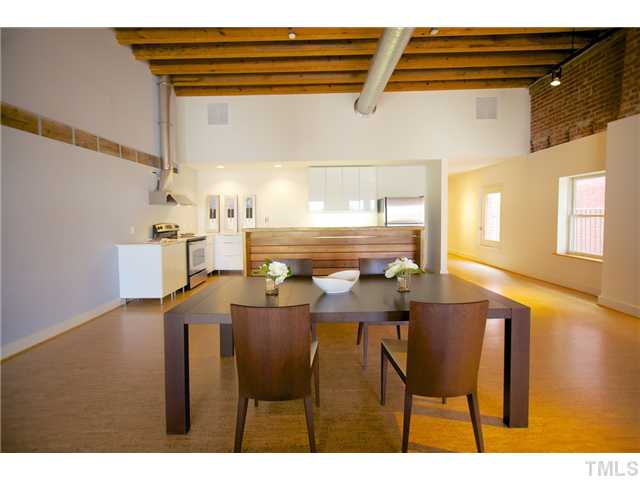 Maybe the red front means it

Maybe the red front means it will be a Talbott's (famous for their red door), or an Elizabeth Arden salon. Heck, maybe a Red Robin! Why go to Southpoint when we have it all downtown.

In all seriousness, I'm envious as I'd love to buy this building. Perhaps you can find out how much they're asking. I'm still kicking myself for not buying that building on Parrish St. when it was for sale.

Interesting piece. Frankly, with the traffic Rue Cler has been pulling across the street, they were crazy not to doll their place up a bit. With the added news on the Hill Building becoming a boutique hotel, I wouldn't be surprised to see even more people nosing around downtown. (For better or, hopefully not, for worse.)

About those double curves on

About those double curves on top -- if you take a closer look, happily it looks like they weren't chopped off so much as smoothed out by filling in the gaps. The rough shape of the curves is still there in the red brick/white goo deliniation.

I tried to contact Empire to see how much they're asking, but I couldn't get a live body and they didn't return my email. Dave, if it piques your interest and you find out, let me know.

Michael, I think it's some of both - they filled in the bottom of the 'troughs', but the broad 'peaks' have been taken down - there isn't enough distance between that fill and the current top of the building to still have the full facade underneath that drip cap.

I found an N&O article from 2003 about Empire's plans for these buildings. I wonder what happened with this one. (Presumably they are keeping 322).

As far as how much they're

As far as how much they're asking, it's held by Empire Alliance LLC, which I think is an LLC that's part of Empire Properties, Greg Hatem's group in Raleigh. (They also own the Bargain Furniture store just across the street, and appear to be doing more with that.)

The Deed of Trust is here:
http://rodweb.co.durham.nc.us/imgcache/opr2005038357-1-9.pdf
I've never figured out how to read this properly, but it would appear that they got the property in 2005 for at least $2 million. Who knows what that means for the sale price...

I thought that was high.

I thought that was high. Maybe the Deed of Trust is from a loan for a set of the buildings. That would make more sense...

Where are you finding tax records that mark the sale? All I can find is the instruments deeding the property to the new owner, and the deeds of trust for the mortgages. The city's GIS site used to at least list the tax value, but that's gone now.

The county tax records website is a great resource. The URL is

If the property was sold after Jan 2004, it shows the grantee and amount.

I'm not sure what is up with the $2 million deed of trust you saw. Even if that were for all three buildings, that seems high for a few years ago.

How odd -- the Deed of Trust

How odd -- the Deed of Trust is from August 2005, but there's no record of a sale in the tax records. The tax value is about $192k, but given that we're close to the end of an assessment period, that means next to nothing.

I'm still trying to imagine the facades added to buildings in the 70's being attractive. What were they thinking then?

I guess it's better than today where most new construction can be rather bland. I like the detail of our older buildings but modern buildings lack any era defining details. Fifty years from now we'll be celebrating a bunch of bland buildings.

According to a Herald-Sun article

According to a Herald-Sun article from a couple days ago... 320 East Chapel Hill St.: Raleigh-based Empire Properties has plans to renovate a three-story building at 320 E. Chapel Hill St. to allow for potentially two different café/bar businesses on the ground floor of the building. The renovation plans will be considered by the Historic Preservation Commission at a meeting on Tuesday. Lisa Miller, senior planner with Durham City-County Planning, said the plans are to allow for two restaurant spaces on the ground floor, office space on the second and two residential spaces on the third. The building in question on Chapel Hill Street is owned by Empire Alliance Properties LLC. That company is connected to the Raleigh development company Empire Properties, which owns a handful of restaurants in the Capital City through its restaurant division Empire Eats, including the barbecue restaurant The Pit. Company officials have said they plan to open a barbecue restaurant in Durham, but that’s not in the stars for the 320 E. Chapel Hill St. building, said Holton Wilkerson with Empire Properties. Wilkerson said the company has issued proposals to two established Triangle-based upscale bars that would each take one-half of the street-level space. He said the proposal is for little if any food to be prepared on-site. “They’re both looking to do additions to their brand, but not necessarily under the same name, and no, it isn’t The Pit,” he said. Wilkerson said the hope is that the second level will house one or more tech start-up groups, and the third floor will be two market-based rental apartments. http://heraldsun.com/bookmark/15406298-Plans-for-320-E-Chapel-Hill-St-in...