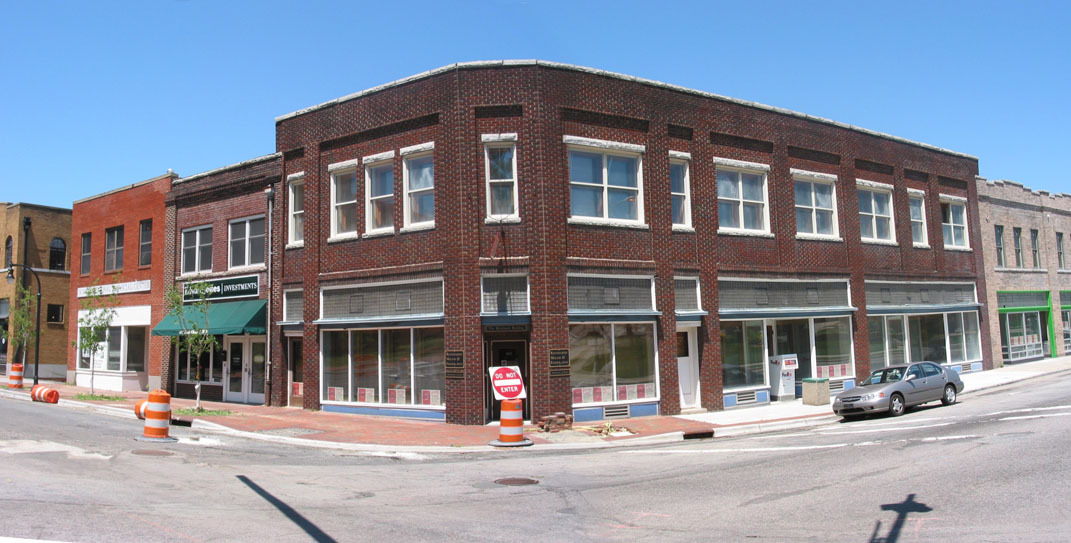 The building on the northwest corner of North Mangum and East Chapel Hill St. was under construction when the below picture was taken in 1924. The building was built by OG Wilson.

The following aerial shows the completed corner building in 1930. 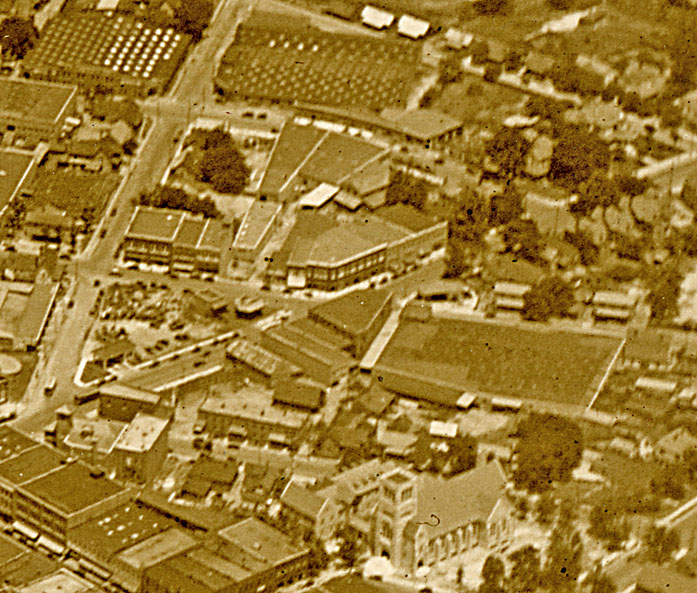 A hauling business was an early tenant of the building. 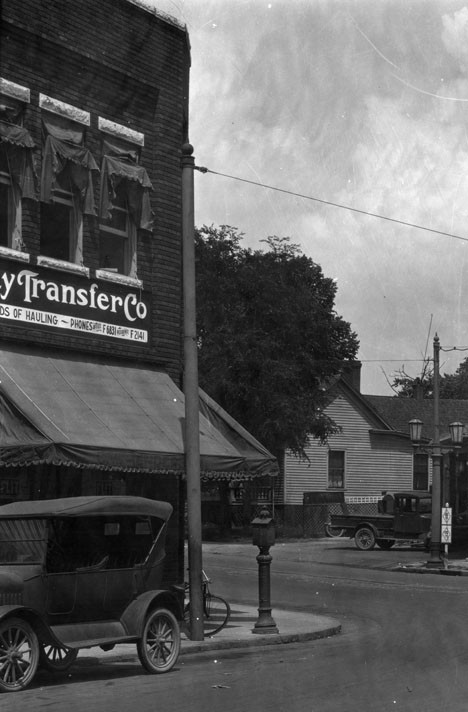 SE Rochelle moved his motorcycle and bicycle business here from Rigsbee Ave. in 1937; he also sold guns and photograhs and had a locksmith business. Rochelle sold the first Harley-Davidson in the state of North Carolina, and organized a motorcycle club of 43 members that traveled the southeast. 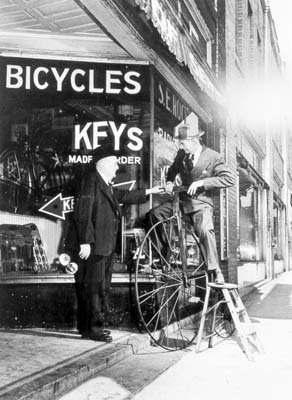 Looking north along the Mangum St. side of the building, late 1930s.
(Courtesy Durham County Library)

Rochelle sold the business in 1957, when he retired. A series of different tenants followed - the most longstanding tenant was "The Style Shop." Shoe stores, Beauty salons, 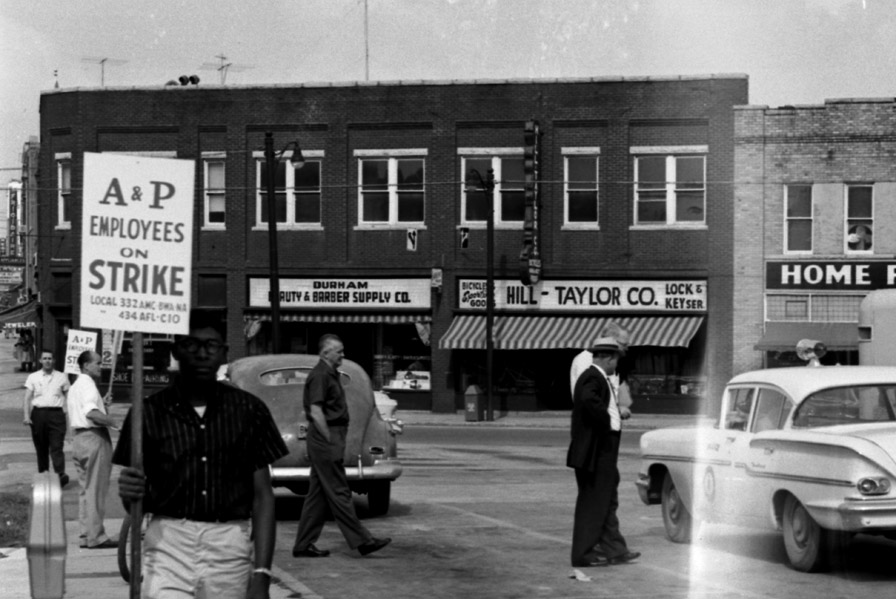 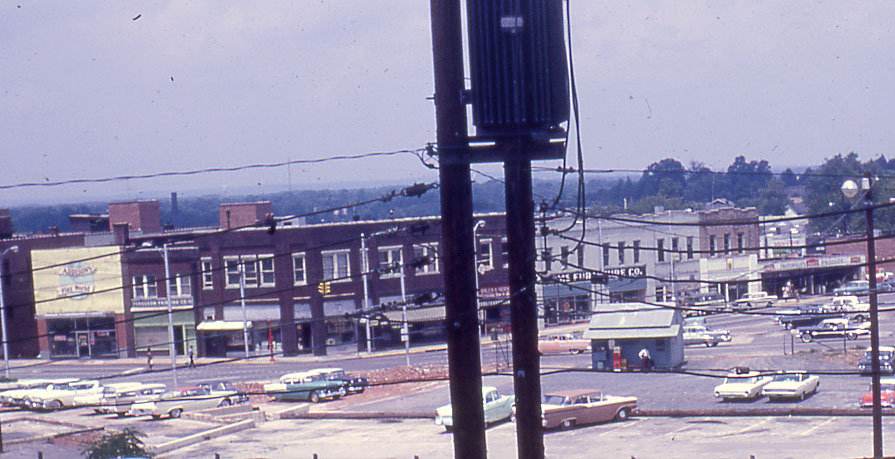 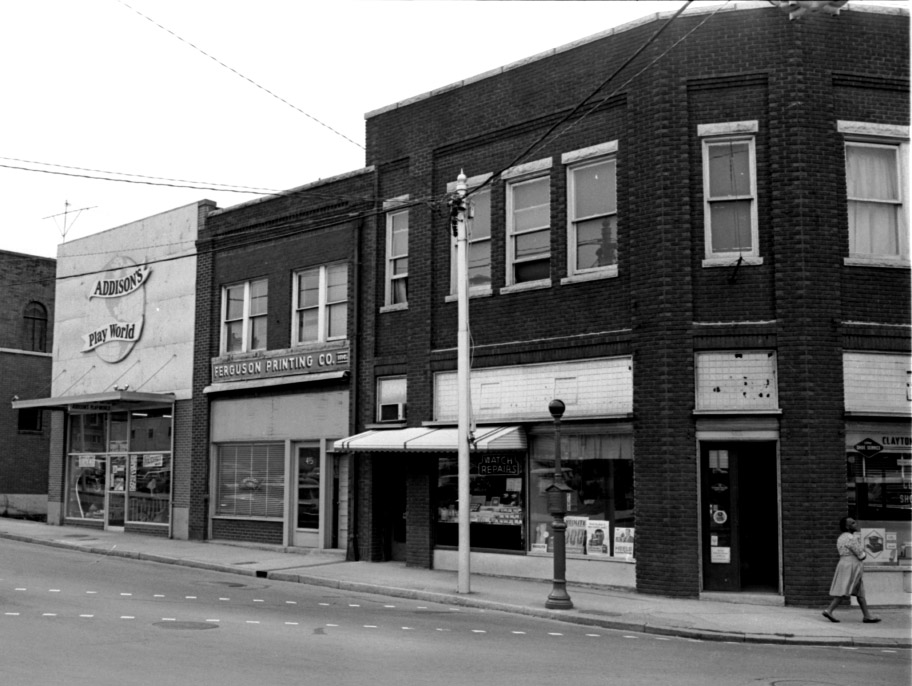 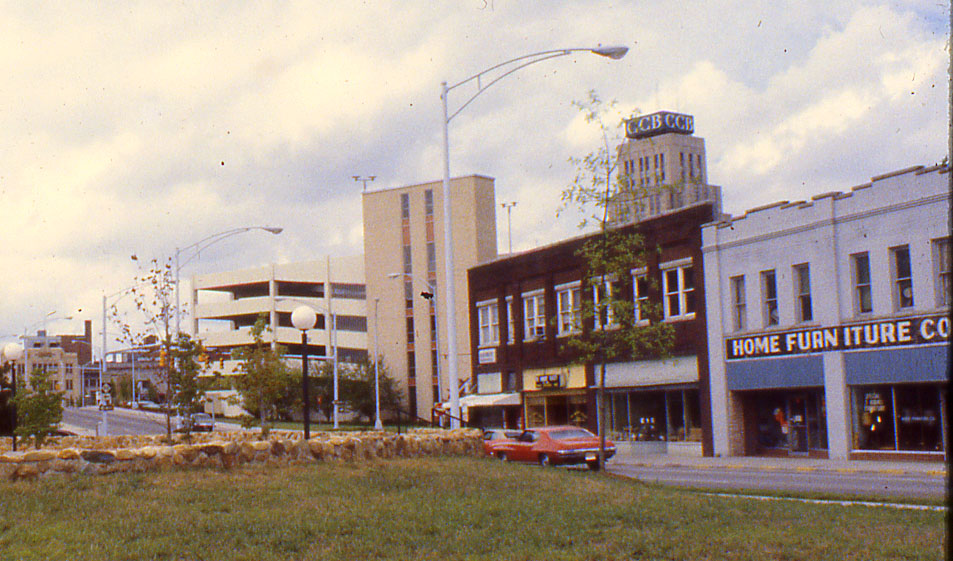 The building ownership stayed in Wilson's family until 1986, when it was sold it to Mr. Charles A. Reinhardt, Jr. in September 1986 after it was renovated following a "roof fire" of March 31, 1986.

This kind of structure was once common in Durham, although there are few left that explictly address the corner - with both a cut corner/entrance and entryways/windows facing both streets. Would that our post-modern designs incorporated this simple, but extremely important framework - respect the corner. You can still use all of your glass and steel - but the corner is important for the streetscape and the pedestrian.

Gary,This site is so cool. I

This site is so cool. I laugh and cry. Laugh at your wry comments and cry at all the damage done. I just got high-speed internet, so I can finally look at one of your collections of pictures without spending a week waiting for them to download via dial-up. I mention this because I have been reading some old posts and I love your idea of having a parking deck on the interior of a site, and surrounding it with sidewalk accessible buildings. What a great idea for the monstrous parking garage at Rigsbee and Mangum. Tear it down and put retail and restaurants on street level, condos on upper floors, and the parking deck hidden in the middle. The city gets to have its fun of tearing things down, more people will be living downtown, and the streetscape will be far more attractive, interesting and lively. What do you think?

Much thanks - congratulations on the high-speed access! The site really doesn't play well with dialup, I realize.

I like your idea - it's a bit more challenging with a triangle, but it's possible (with a smaller parking deck). I don't understand why, instead of paying bond money to upgrade the decks, we don't put out an RFP (request for proposals) to developers to build something more useful on any of the downtown lots/decks. Give 'em the land for free if they'll build something good that includes hidden structured parking accessible to the public.

Forgive the stupid question, but does the city make money off the parking decks (this parking deck in particular)?

Definitely not a stupid question. The city has parking contracted with a company named Central Parking, so some of the revenue from parking goes to defray the cost of that contract. The remainder goes to other operating expenses for the deck and debt service on decks. It isn't clear to me whether the decks are revenue-neutral or a net loss, as money is pulled in from the general fund to pay for debt service on the Durham Centre parking deck.

Have you ever considered running for the city council? Of course there is a value in being an outside critic, but the council badly needs your knowledge, intelligence, energy, and independence. To be fair, some members of the council do show some willingness to ask hard questions at least some of the time. But several of them are simply dead weight.

I also believe that we need to scrap this relic of the Progressive Era known as the city manager system. We need to elect a mayor who will be a chief executive and bear responsibility at the polls for all of the scandals and mismanagement that go on. That way we could also hold an elected official responsible when the city tears down perfectly good houses.

"Ecrasez l'infame!" (Crush the infamous thing) is the way Voltaire used to end his letters. I think I need a similar tag for my posts How about Ecrasez la loop!

Thanks for the 'vote' for city council. I'm not sure that I'm much of a politician; I don't have much patience for 'being political.' Practically, I don't think I could afford it. While paying our city councilpeople a full-time wage might reinforce the near-sinecure position several of our officials occupy, it's hard to imagine doing the position justice without putting in 60-80 hrs a week. So you've either got to do two jobs, giving neither the energy they deserve, or you've got to have someone supporting you financially.

The city manager system seems odd to me as well, having grown up in a strong mayor city. I would say that they CM system is probably better for a city that has a proclivity for corruption. Although we've got a 'weak mayor' system, the political clout is there (especially since he has 2-3 additional knee-jerk votes on council.) I can't imagine how things would be if we we're in a strong mayor system. We'd probably have contracted all city services to UDI.

But with some of the ridiculous city managers we've had in my time in Durham (Lamont Ewell's shower springs to mind) it's no wonder things are a mess.