The Roberts House is a hip-roofed bungalow with German siding, eave brackets, exposed rafter tails, 4-over-1 vertical sash windows, and an engaged Craftsman porch with a front cross-gable. It was once home to Charles "Buck" and Ethel Roberts, owners of Scott and Roberts Sanitary Dry Cleaning. 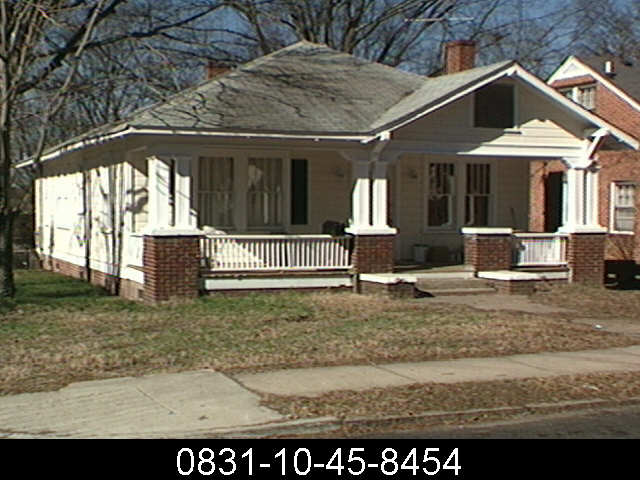 Despite the fact that I type the disclaimer above about the National Register listing, I generally do try to verify the info for accuracy. Research indicates that the Roberts did not own the Edgemont Cafe (it was the Ricks family), but instead they were part owners of Scott and Roberts Sanitary Dry Cleaning, which had the largest dry cleaning facility in the state.  There's more about this below.

Owner Charles "Buck" Roberts was born in 1889. His family was originally from Tally Ho in Granville County (I couldn't make that up if I tried). He worked for a short bit of time as a rubber worker for Goodyear. His draft card describes him as "Tall, Medium Height, Hazel Eyes, Black Hair". Charles "Buck" Roberts graduated from Duke University in 1922. Taken from Duke's Chanticleer yearbook in 1922:

What baseball fan in the State has not heard of  "Buck " Roberts ' ? He made an enviable record in several of the Southern leagues. He has moved in and out of us, and those of us who know him think he is as good a fellow as he is a baseball player. Sixty -six.”

In addition to being a talented ball player, Buck was a trained tailor, and an entrepreneur from the start. He opened a tailor/dry cleaner called Petty Roberts in 1920. While there he met future business partner Mack Frederick Scott. Before long, Petty was out of the picture. Buck married Ethel Wood (b. 1900) sometime in the mid 1920s. They had this house (now a vacant lot) built on Hyde Park Avenue, around the time of the birth of their son Buck Jr.  During the 1930s they built the company up to numerous locations. By 1940, Mack Scott was also bought out, leaving Buck Sr. and Ethel as the lone owners.  In 1946, Buck Sr. died unexpectedly. At the time they were beginning to build the new office at 733 Foster Street and expand even further.

The Hyde Park home was sold to Harvey Mallard around 1950. Mr. Mallard worked for American Suppliers as a foreman. His wife Donnie worked at Watts Hospital.

Ethel Roberts, while she moved out of the family home, still ran the company into the 1980's, as they expanded into a dry cleaning monopoly. As other dry cleaners closed, including local DW Brown, they picked up their old locations.  The company was dissolved in 1987, within a year or so of when both Ethel and Buck Jr passed away. For a further look at the Scott and Roberts Dry Cleaning empire and those buildings' alternate/former lives:

2021 Angier Avenue (a personal favorite on the demolished list)

312-314 South Driver Street (they snatched up this old DW Brown Dry Cleaners location, in addition to other locations)

909 East Main Street (Perhaps this is where the NRHP error re: Edgemont Cafe started? Or perhaps he owned the building?)

733 Foster Street (keep an eye on this modern gem the Roberts had built. It's a block from all the action, in a cool as hell building, and it's being rented for $10/Sq foot, which is a steal. I vote for a breakfast place. They'd make a killing in this neighborhood, early and again latenight). 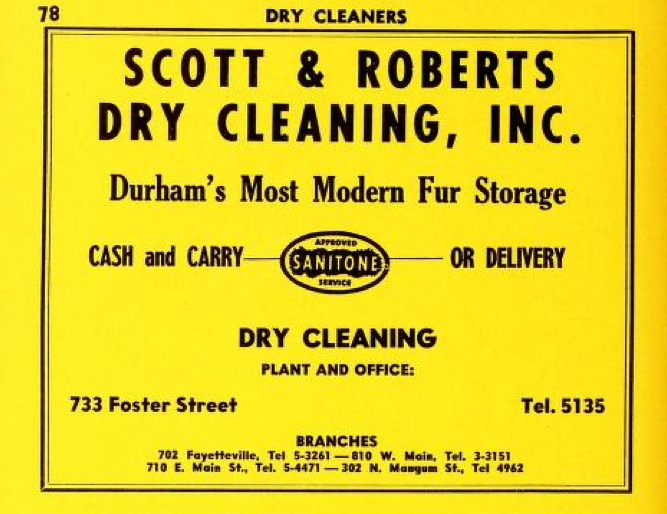