The history of 204 Forestwood is one of the more complex of the houses on this tour. Not only has the house undergone a number of renovations, but also the date of its original construction and its orientation on the lot are also somewhat mysterious. 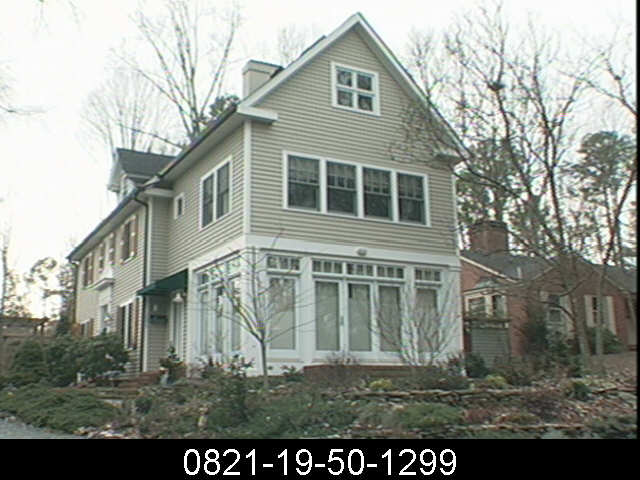 The history of 204 Forestwood is one of the more complex of the houses on this tour. Not only has the house undergone a number of renovations, but also the date of its original construction and its orientation on the lot are also somewhat mysterious.

The current owners have lived here for seventeen years (since ca.1987). The first, or two of the earliest, known owner/occupants were an attorney named Harvey Harward and his wife Gertrude. Both Mr. Harward and the house appear in the city directory in 1932 for the first time. However, oral history tells us that the house was built in 1921. The difference of eleven years may be accounted for in various ways. The development of Forest Hills itself was not underway until 1925, so from this standpoint the house would have been built between 1925-1932. Generally speaking, very little construction took place in Durham between 1929-1932 because of the depression, making a likely time frame for construction sometime between 1925-1928. Using the architecture as a guide, one might give it a date closer to 1925 than 1928 because of its more classical Georgian form.

However, if this house were constructed in 1921, it would be one of the oldest houses in Forest Hills and would, in fact, pre-date Forest Hills, the "settlement beyond Needmore on University Boulevard" as it was then described in the directory. However, the way the house is situated on the lot, in line with the road and the other homes on the street, suggests that it was not there before the road was built and the other lots were platted. Its positioning, not unlike a Charleston Single House with the main entrance on the side, suggests a more likely scenario where the Georgian design of the house would not fit any other way.

All of the siding is new, adding to the difficulty in dating the home because important details have been lost.

The north end of the house (street-facing) originally comprised a screened porch. The porch was expanded and glazed, and a second floor master bedroom and bath were added on the second level. Over this, a full bath on the third floor was added for the chi ldren. On the southern end of the building (garden-side) is a recent, three-story addition yielding a modern conservatory on the ground floor adjoining the kitchen/dining room, a study on the second level, and an open plan children's bedroom on the third floor.

A number of significant structural changes have been made to the interior of this home in order to open-up and unify the many small spaces that were here. In the dining room a bank of traditional small windows have been replaced with French doors. The butler's pantry that was paral- lel to the ground floor stairs was completely removed to open up the main floor and kitchen. A wall between the kitchen and dining room was also taken out.

In the living room on either side of the fireplace are two original doors leading to the former screened porch. The doors provide symmetry, scale and elegance and offer a counterpoint to the windows at the opposite (southern) end of the house. The stairs from the ground floor to the second floor, which were originally boxed in, culminate in a beautifully detailed semi-circular balustrade. Over this was a minor, enclosed stair- way to the third floor, now removed. The second floor originally included three small bedrooms and two baths, both of which have been completely made over. A new closet has been added to the middle bedroom, plus the study and a new stairway leading to the converted attic space, now the children's adjoining bedrooms.

The original driveway had been situated perilously close to the house, providing another argument for the house being built on a pre-sized lot. The original driveway now enjoys a second incarnation as the entrance walkway and garden. The swimming pool and landscaping that you see in the garden represent the third, most recent phase of improvements.

Charles S Allen and his family lived in the house during the early 40s and possibly the late 30s. He was a prominent businessman who owned the Allen Insurance Agency, was president of Citizens National Bank of Durham, Durham Bond & Mortgage Co, and Durham Sports Enterprise as well as Vice President of City Investment Co. all at the same time. Henry Stoever, ]r., a manager at American Tobacco and his wife Garetta lived there in the 50s and Dr. Herbert Sieker, who is a retired professor at Duke Medical Center and his wife, Dorothy, lived there in the 60s and purchased additional land from the neighbor on the east to expand the gardens.