Forest Hills archItect George Watts Carr designed this house and #15 next door for his own family and they are two of the oldest houses on Oak Drive. 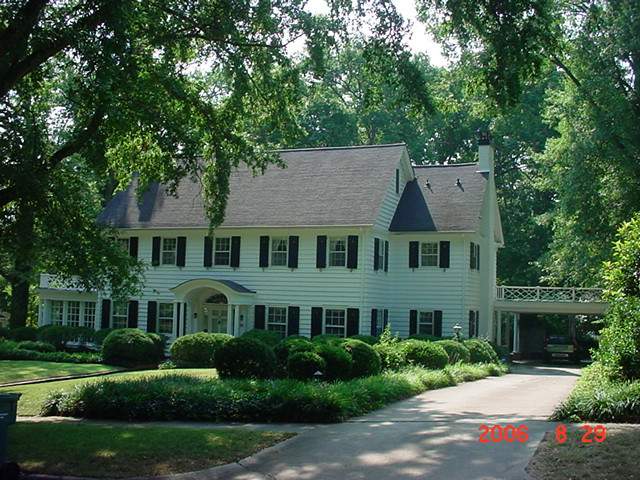 Forest Hills archItect George Watts Carr designed this house and #15 next door for his own family and they are two of the oldest houses on Oak Drive. Carr and his wife lived at #15 and #17 was the home of his wife's sister Gertrude and her husband Frank Webb. The house was purchased early on by Jones and Mattye Fuller. He was a partner in one of Durham's earliest law firms, Fuller, Reade and Fuller. Sam and Ava Hobgood bought the house in 1962. He was a tobacconist, working for the Imperial Tobacco Company and Mrs. Hobgood was a beloved teacher at George Watts and Lakewood Elementary Schools. She lived here after her husband's death until 1998, when the current owner purchased the house.

The house is a classic example of the Colonial Revival style with its symmetrical five bay main block, high-pitched roof, and shuttered windows. A small arch-roofed porch leads to the front door, which is surmounted by an elegant fanlight, typical of the Colonial Revival. The exterior retains most of its original appearance, except for the carport added on the southwest corner and the porch on the east side of the house, which was open before the Hobgoods enclosed it to create a sunroom.

The interior space is open and flows comfortably from one large, airy room to the next. The floor plan is one often used by Carr, with a central entrance hall flanked by formal living and dining rooms and a den behind. Original woodwork includes fireplace mantels, crown molding with dentil decoration, the stair banister, and windows and doors.

The current owner has updated the inrerior of the house for modern living with bright, light colors accented with white trim. The original hardwood floors, once hidden by wall-to-wall carpet, have been uncovered and refinished. Newly added chair rails in the dining room and built-in bookcases in the downstairs den and upstairs bedrooms blend well with the original woodwork. The three bathrooms in the house have been updated except for the tile floors, which are original. The Hobgoods first updated the kitchen in the 1960s, combining the original kitchen and butler's pantry to create a large modern space. The current owner has again updated it to 21st century standards with modern appliances and lighting.

The hallway leading from the front hall to the kitchen has a wall of doors leading to a small bathroom, the basement, a closet, and back stairs to the second floor. This small, enclosed staircase near the kitchen was designed for the use of servants, a common part of life in middle class American households in the early 20th century.The current owner has had the door to the back stairs removed for easier access by her modern family, but another remnant of an earlier lifestyle remains in, now inoperable, electric servant call buttons set into doorframes throughout the house.

Upstairs, the floor plan duplicates the first floor. The master bedroom and a bedroom now used as a study both have fireplaces. The mantels are some- what simpler in design than those in the living room and den below, a typical feature of traditional house styles in which the second floor was usually less ornate that the formal rooms on the main floor, with simpler decoration and lower ceilings.

The house's large windows offer views over the lawn and large terraced garden at the back of the house, generously planted with bulbs by Mrs. Hobgood. The current owner purchased the lot behind the house to extend the property all the way down the hill to University Drive. Local tradition holds that the Fitzgerald family laid the brick steps leading from the back door to the rear terrace. The Fitzgeralds were well known African-American birckmakers famous for their work on brick tobacco warehouses in downtown Durham. Another original feature of the landscape is the stone footpath and steps linking this house with #15, which one can imagine was used by Mrs. Webb to exchange visits with her sister Mrs. Carr who lived next door.