106 Forestwood Drive was built in 1928. It appears in the city directory as an address occupied by Mr. R. Thurman Taylor and his wife Rosa in 1929. Mr. Taylor, who worked primarily as a sales representative for several companies during his professional life, continued to reside here with his family for many years. 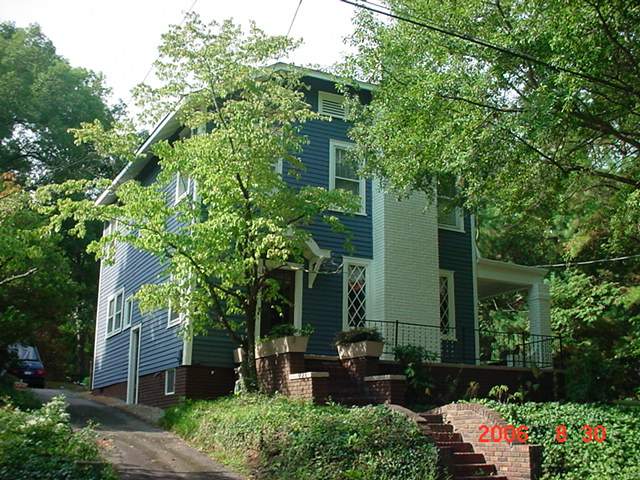 106 Forestwood Drive was built in 1928. It appears in the city directory as an address occupied by Mr. R. Thurman Taylor and his wife Rosa in 1929. Mr. Taylor, who worked primarily as a sales representative for several companies during his professional life, continued to reside here with his family for many years. R. Thurman, Jr. appears in the directory in 1930 so we know that Mr. and Mrs. Taylor had at least one child.

We do not currently know who the architect of this home was, but its internal plan conforms to a traditional "side-passage plan". This is a layout that became popular in North Carolina in the nineteenth century. It comprises a passage along one side of a house (in this case the east side) and two rooms on the other (the sitting/living room and dining room). The first room off the hall is the sitting room. One can tell from the shallow depth of the fireplace in this room that it was originally intended for a coal-burning fire. (Gas logs were installed in the 1980s). A second chimney at the far (southern) end of the house was almost certainly intended to vent a coal or wood-fired stove.

While the interior plan of this house is traditional in all respects, there are a few features that demonstrate an infiltration of more modern, as well as, eclectic trends. The 'eyebrow' profile of the front porch on the north (street) facade suggests a prolonged bungalow roof sloped over a doorway in a hooded motif or, perhaps, a thatched cottage, more than a house of these proportions and scale. The end gable follows the outline of a flattened gambrel roof with projecting eaves, suggesting a farmhouse influence. The west side of the house invokes a Prairie-style vocabulary through the use of a projecting flat-roofed porch supported on heavy, straightened columns, and a long, horizontally organized window arrangement. While not a clerestory window, from the interior these windows are placed sufficiently high in the dining room wall that they allow both privacy and light at the same time making a distinct period statement.

At one time, the dining room must have been very dark, notwithstanding the windows just described, due to a wall that separated the dining room from a back hallway. Therefore, originally there was only the one set of windows into the dining room. One can see where the wall used to be because of the differently shaped windows on the west wall, each belonging to different spaces. There was also a solid panel swinging dining room door that formed the egress to the back hall. This is now the sliding blue door between the master bath and laundry room upstairs.

The current owners have extended the footprint of the southern end of the house by 125 square feet. On the ground floor there is a sunroom and rear vestibule leading onto the kitchen. Over this there is the laundry room back-to-back with the master bath. A view of a 19th century barn and the tip of an old Forest Hills farmhouse may be seen from the sunroom and the new bath, capturing an extraordinary snapshot of Forest Hills before it was developed.

The two front bedrooms on the north (street side) of the house, originally the master bedroom with an adjoining box room (nursery or sewing room) and an intermediate bedroom, are, essen- tially, in their original configuration.