Architect Archie Royal Davis designed 1022 Westwood Drive for Florence and Virgil Ashbaugh in 1939. Mr. Ashbaugh was the President for Durham Dairy Products located directly behind Duke Memorial Methodist Church. This was a most popular stopping place for all of Durhamites, especially the Sunday school pupils from just across the street. 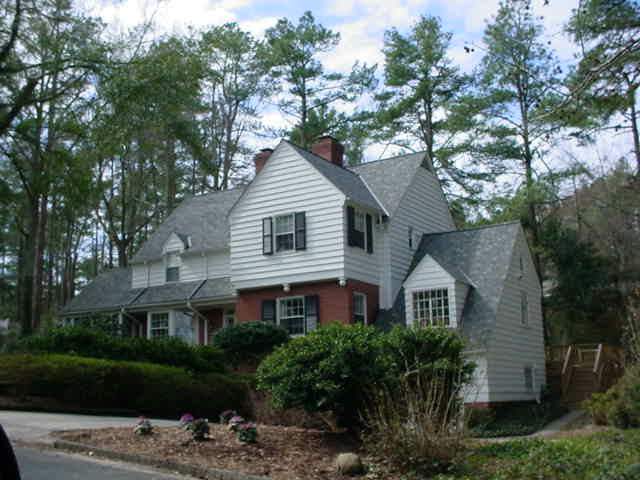 Architect Archie Royal Davis designed 1022 Westwood Drive for Florence and Virgil Ashbaugh in 1939. Mr. Ashbaugh was the President for Durham Dairy Products located directly behind Duke Memorial Methodist Church. This was a most popular stopping place for all of Durhamites, especially the Sunday school pupils from just across the street. Architect Davis worked within the terms of a specific architectural vocabulary that allow his buildings to be classified into two essential groups, Williamsburg Style and Eclectic Style. This house is representative of his eclectic style.

Within this category there are certain features that Davis used repeatedly. A primary defining element among these is the Elizabethan-style second story that extends over the ground floor level, called a jetty. There were several original functions of the jetty dating back to the 16th century, including that it maximized floor space while minimizing the footprint, the basis for property tax values at that time. It also provided protection for the second story as well as pedestrians walking below. In the American colonies, the jetty also had a military purpose. Houses with jetties have come to be known as "garrison colonials." None of these applications would, of course, apply to this twentieth century home, and so the use of this overhang must be considered an aesthetic decision to create historical ref- erences and visual interest in the facade by breaking up its simple form and shifting elements onto different planes. Jetties have become a common feature on suburban houses today, and one has to credit Mr. Davis with creative foresight in using them to enliven and ground his designs in history. The pendant knobs that hang on the underside of the jetty are another distinctive Davis feature borrowed from Elizabethan architecture.

This house represents a fresh take on history by Davis. The essential massing and profile of this building, and the scale and simple rectangular form of the main house produce a very different order of things. The gable end roofs and the secondary shed-roofed structure, that runs the length of the eaves at the level of the second floor on the front faade (called a pent), invoke the plain farm faades of the 18th century American colonies. The three implied bays show a concern for symmetry. Combined with the steep pitch of the roof, the rectangular transom over the front door, and the engaged dormers, the bays reflect 18th century architecture from Pennsylvania, Delaware and Virginia. The contrast created by the steeply pitched garage roof which terminates in uneven legs, suggests that Davis wanted to create the look of an historical house which would, in reality, have been built over time and reflected different architectural periods. There are two final Archie Davis features to be mentioned: the inclusion of the bay window on the front facade and the use of the wide clapboard, eight to twelve inches in height and mitered at the corners.

The interior floor plan is entirely traditional. As one enters into the main foyer, there is a living room on the left that leads to the original screened porch, two rooms to the right, the dining room and kitchen, and a study center rear. The porch is as you would have found it in 1940, including its original tiled floor. The kitchen has undergone two significant remodels in 1993 and 2000. During the first of these updates the laundry room was moved from the basement to a former closet space in the kitchen, the large, intru- sive, and very old-fashioned hood vent was removed and replaced with an invisible one, and a wet bar was added in a former pantry. French doors have replaced solid doors and a tile floor has replaced linoleum.

The wainscoting in the dining room and stairway is a recent addition, but appropriate. The fireplace and bookcases in the I iving room are original. The fireplace is in the Adams-style, adding still another period to the eclecticism of this house. The decorative gem of the downstairs is the mirrored dressing table in the powder room - a must see. Upstairs, the bathrooms are original, as is the layout of all of the rooms.