Construction began on this house for William Griffin and his family in 1940, although the traditional colonial architecture might suggest it was much earlier. It is, in fact, a revival piece designed by George Watts Carr. 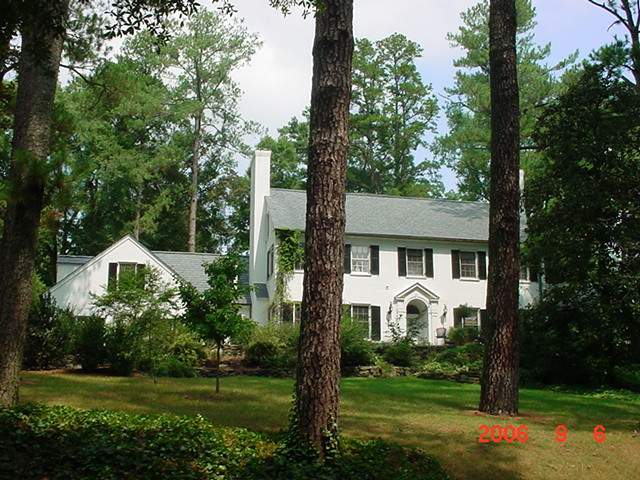 Construction began on this house for William Griffin and his family in 1940, although the traditional colonial architecture might suggest it was much earlier. It is, in fact, a revival piece designed by George Watts Carr. As a type, it is imitative of the New England Georgian house that was built in this country between 1700-1780. Generally, this kind of house would include the features that you see here: end-gabled, two-story rectangular block on a low or raised basement; two rooms deep and anywhere from three to seven bays wide; and one or two chimneys toward each end, either within the walls or on the exte- rior. This was one of the two largest commissions for Carr during 1939 and 1940. The building contract for this home is reported to have been a staggering $20,000! Griffin, who owned Ace Distributing (now Harris Distributing), raised his two children here, only moving in 1991 following the death of his wife Clyde. It is a house that is intended to suggest status, emulating the aristocratic country manor in the Renaissance style, albeit on a smaller scale.

Still a generous lot by today's standards, the Griffin property originally included four platted properties. The current owners recently under- took an extensive remodeling of the house and garage in order to accommodate their modern family of six. The original garage and house have been incorporated into a larger, composite structure by capturing what had been an open breezeway between the two buildings, and converting this into the primary family entrance. This was accomplished relatively simply but to wonderful effect: the breezeway was roofed over, the stone paving retained; French doors added to the rear and front, retaining the ambient light. Also, stairs to the children's playroom over the garage have been added. The closet in the breezeway/hall was formerly the gardener's WC.

To the west and north (behind) the garage was a driveway and turnaround diminishing usable garden area. The walkway leading to the front door, which used to be a conventional narrow, straight path, has been reinvented and is the gracious, curving, terraced entrance that you find now. Both the terrace and the back yard have been extensively re-graded.

The interior of the house has also been structurally changed. The side entrance to the house was originally through a pair of double doors leading into a small square kitchen and a hallway. This is now the circulation leading from the breezeway, past the kitchen, to the rest of the house. The small downstairs bath was formerly the butler's pantry. A wall that divided the living room from the kitchen has also been removedl and doors added at the far (east) end of the house, allowing a vista the length of the entire house. The paneled den on the street (south) side, oppo- site the kitchen, as well as the dining room and the screen porch are in their original condition except for some texturizing and re-decorating.

The second floor includes an ingenious conversion of a hallway and window into a light filled laundry room. There are two, small original bathrooms placed between the four bedrooms, as was the custom. In this case it is a perfect fit; a suite for the girls and one for the boys. Using space previously allocated to a linen closet and a portion of the original master bath, a stairway was added "to give access to the converted third floor.

The third floor is an entirely new addition, converted from a large, open attic measuring 1100 square feet. The roofline was raised, but only as high as it could be without interrupting the original profile of the house. A balcony was added on the north side off the master suite where once a roof had been. The wood floors are, intriguingly, made of bamboo.