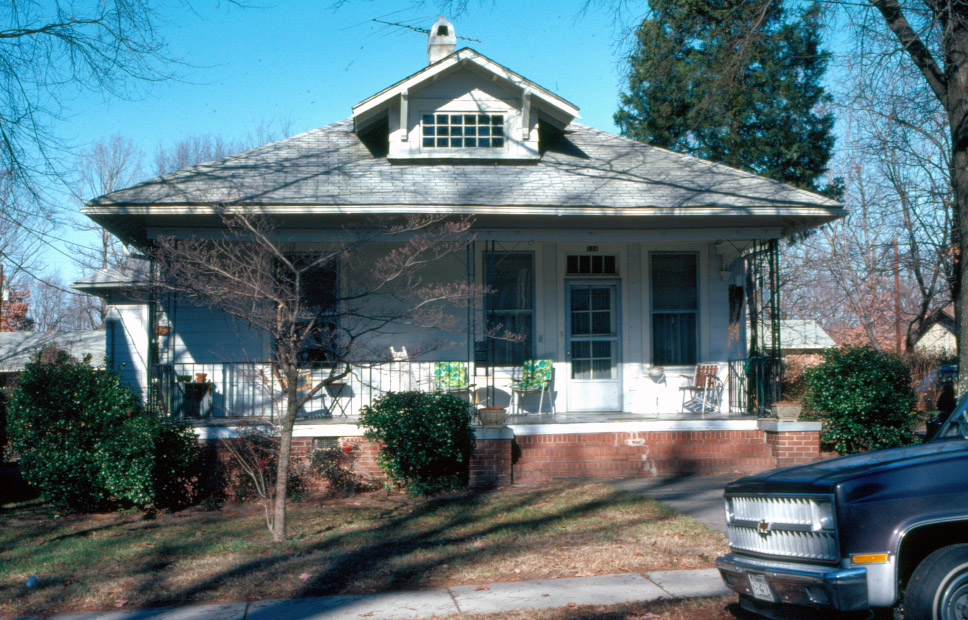 Information about the Property, its Owners, Residents, and History:

The early history of the bungalow at 116 West Lynch is bound up with the history of persons associated with the tobacco and banking industries in the years during and following World War I.  Maynard Mangum, who lived nearby at 1111 North Mangum Street, acquired the property from the Duke Land Improvement Company and appears to have arranged for the hip-roofed bungalow to be built. It is unclear which contractor built the subject house, or whether an architect was involved. However, in 1916, Mangum built a two-story house at 1108 N. Mangum (across the street from his own residence at 1111 Mangum), utilizing the services of Rose and Rose, Architects, and J. H. Horner, Contractor. 1 That house, which still stands, and two other houses on Cleveland Street no longer extant, shared porch millwork details (brackets) with nearby houses that are nearly identical in plan to the subject house. Newspaper advertisements from 1917 give the Contractor's name for all three houses as J.H. Horner.2,3 Based on the similarity of millwork and the proximity of these houses in place and time, J.H. Horner could well have been the builder of the subject house. Three other bungalows in the vicinity having the same detailing and general layout as the subject house are: 107 W. Lynch, 1301 Mangum, and 323 East Trinity. All four houses are quite similar to kit houses sold by several national companies around 1916, including: the Harris Model M1022, the Sterling “Winsom”, the Lewis “Sylvan”, and the Bennett “Sherrill”. However, none of these models appears close enough to match exactly.4 A search of the attic revealed no labeled lumber, so it seems unlikely that this was a Sears home. It's possible that Mangum ordered plans from one of the above firms (or similar) and used them to have the subject house built, whether an architect was involved or not. If an architect was involved, it could have been Rose and Rose, who had designed both 1111 and 1108 N. Mangum for Mr. Mangum. However, hiring an architect to design a modest bungalow when dozens of plans were available for them by mail seems to this researcher rather unlikely.

Benjamin Winston Rogers was the house's first documented occupant in 1917. He was 43 years old and had been employed most recently at the Oxford orphan asylum, and as a teacher at Peabody College (now Vanderbilt) in Nashville, TN before that.5 Though he was born in Tennessee, his family appears to have been from Durham originally. His father, William H. “Colonel” Rogers, was a well-known Durham citizen and long-serving member of the County School Board. Benjamin Rogers was elected teller at Durham Loan and Trust in January 1917. 6  Since his name does not appear in the deed history, one assumes that he rented the house from the Mangums.  Rogers and his wife had moved to a house at 1205 Elizabeth by 1920. 7

Samuel T. Rogers, secretary/treasurer of the Markham-Rogers Co, and Wesley Rogers, farmer, lived at 106 W. Lynch (two doors away) in same year, according to that year's Directory. However, W.H.'s obituary does not suggest they were direct relatives to B.W. or W. H. Rogers.8

The first owner/occupant, in 1918, was Robert Burke Suitt, an associate of Maynard Mangum in the Star Warehouse in the capacity of Cashier (Suitt's name is featured prominently in newspaper advertisements of the period).9 Suitt and his wife Viola had recently lived at 423 Holloway and 525 Holloway in 1916 and 1917 respectively. 10   Suitt was a “well-known tobacco man,” and is listed in the 1921 Directory as a “clerk” for the American Tobacco Company. However, his tenure at 116 was cut short in that year by an unexpected illness that befell him while traveling on business in Florence, S.C.  His sudden infirmity prompted two operations, to no avail. His obituary notes that he and W. L. Umstead had opened a tobacco warehouse several years before his death 11 (W. L. Umstead was from the same neighborhood, having lived variously at 106 W. Seeman and 1101 Mangum). Suitt's widow Viola sold the 116 W. Lynch property at auction in the winter of 1922-23 to Gregory Sales Company, from which W.D. Hester acquired it in 1923.

William Davie (W.D.) Hester was the son of S. J. Hester, a prominent Durham businessman and landowner, who had fought in the Civil War and “encompassed in his span of years all the changes that have come about from the time of slavery till the present day of flying machines, and wireless telephonic communications.” 12  W. D. followed his father's path in real estate and business. He owned a Gardner car dealership,13 the Carrington-Rogers Drug Store, 14 and also acted as an attorney. The account of his 1918 wedding to Maude Jones in Baltimore notes curiously that “both bride and groom are very popular here, and news of their marriage will be a great surprise to their many friends.” 15 W.D. was 51 years old at the time. In 1918, W.D. subdivided a large parcel of “beautiful suburban land” in West Durham “on Club Boulevard to the Country Club” into suburban lots and offered them at auction.16 Presumably these transactions were a further boon to the Hester coffers.  Although the Hesters lived near the Country Club in the early 1920s as citizens of considerable means, they chose in 1923 to relocate to the relatively modest bungalow at 116 W. Lynch, when W.D. was 55 years old. Perhaps proximity to town and old friends in their golden years played a part in their decision. After two years, however, the Hesters had moved on.

Theodore Edward (T. E.) Belvin, listed as a “tobacconist,” had been a Durham County Commissioner in 1904-5, 1908-9, and 1910-11; his last term was coincident with one of Maynard Mangum's. Belvin's wife Mary Jeanette (Durham) Belvin was sister-in-law to Maynard Mangum, her sister Julia A. Durham being Mangum's wife. The Belvins lived at 1003 N. Mangum Street in 1920, two doors down from extended family at 1107 N. Mangum; that household included Hubert B, bookkeeper, Miss Jennie M, teacher, Joseph B., bookkeeper, Miss Lois L, stenographer, and M. Emma Belvin, widow of J. B. Belvin.17  Theo and Jeannette purchased the subject home in the spring of 1925 from the Hesters. In that year, Charles Belvin (who may have been a son) lived with them and was a fireman with the Durham Fire Department.  Theo Belvin died in 1931, and his widow remained in the house until her death in 1943, at which time she appears to have been the only occupant.18

In 1944, the deed transferred in an estate settlement to Robert Linden Pollard, Jr., who was Mary Jeanette Belvin's grandson through his mother Dora Belvin. Robert was a Superintendent/Foreman at Liggett and Myers 19. The City Directory indicates that in 1944, Margaret Belvin Pickett and her husband Julien Pickett assumed occupancy of the house for about a year. From 1946 to 1954, however,  R.L. Pollard, Jr. shared the house with his mother Dora and father , and with Charles A. Pollard, his brother, from 1945 to 1949. Charles moved out in about 1949. R.L. Jr.'s wife Uldine appears in the Directory in 1951, and the two couples continued to share the house until 1954. After Dora  and R.L. Sr. passed on, R.L. Jr. and his wife Uldine stayed until 1962, when they moved to a new, modern split-level home at 1529 Acadia and presumably put the subject house up for rent. 20 Though they didn't go far, their move paralleled the early years of white citizens leaving central neighborhoods in American cities. In 1963, the house was listed as “vacant' for the first time in the Directory. In 1964, however, Arthur Herndon moved in as a renter, and stayed until 1972. Again in 1973 the house was vacant, but in 1974 the Pollards sold the house to Howard B. (pipefitter) and Frances K. Braswell. A succession of owner-occupants employed in a great variety of fields followed to the present day, with the house turning over every six years on average between owners who had no familial relation to each other, in sharp contrast to the house's earlier days. The house has been under its current ownership since 2006.

Took my first steps in the

Took my first steps in the hallway of this home of my grandparents and aunt and uncle. Both named Bob Pollard{uncle and grandfather}

Thanks for all your work on

Thanks for all your work on this history, Grayson!  Hope it's alright that we moved the writeup into the main page from the index card so more folks can appreciate it!