The 400 block, moving from west to east: 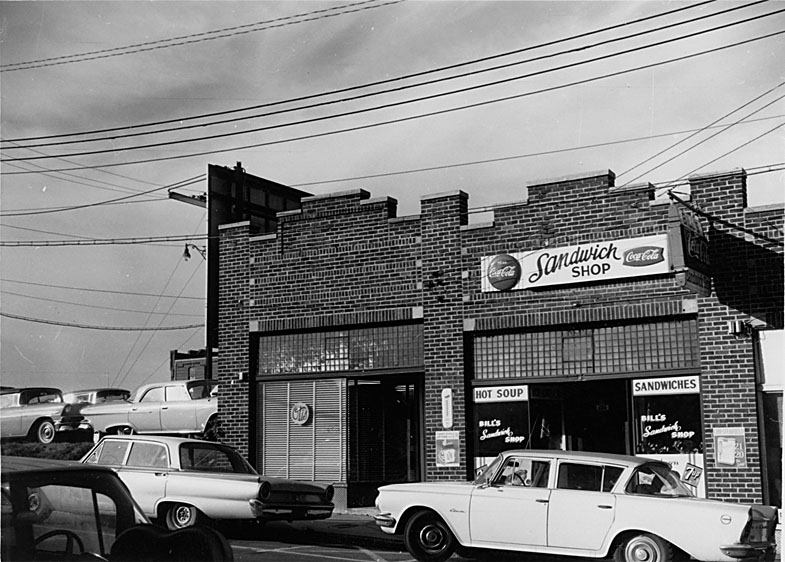 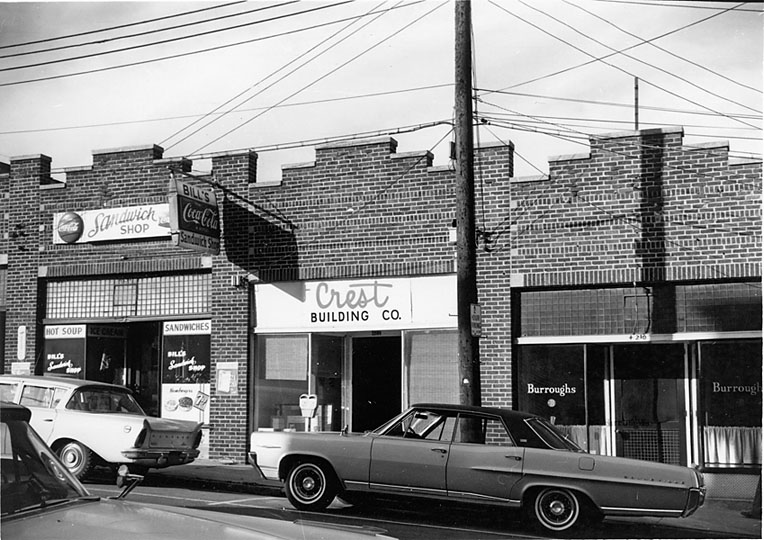 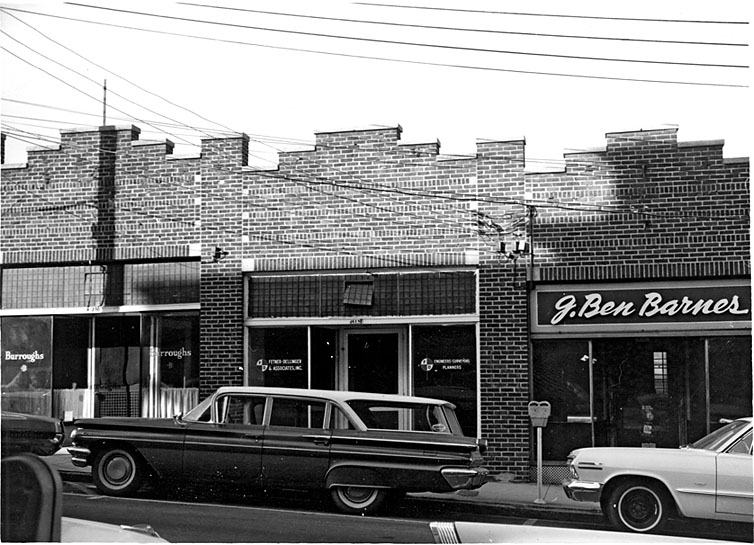 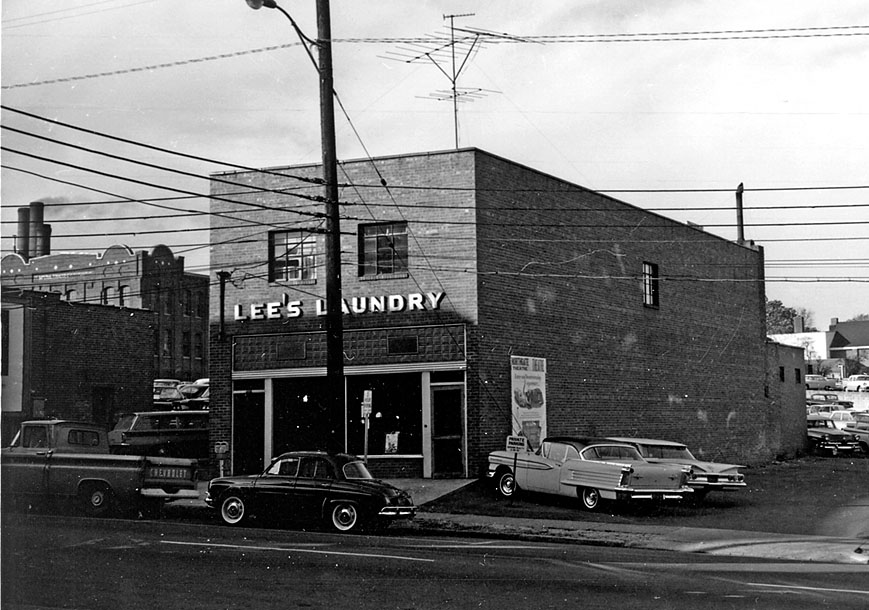 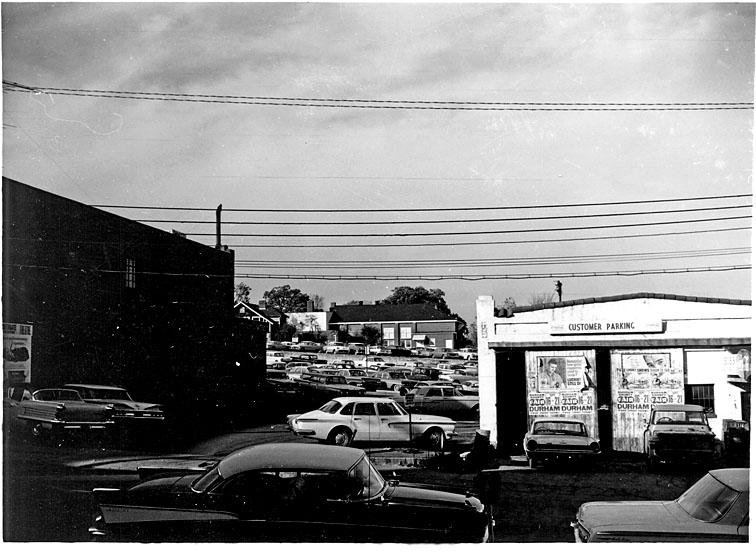 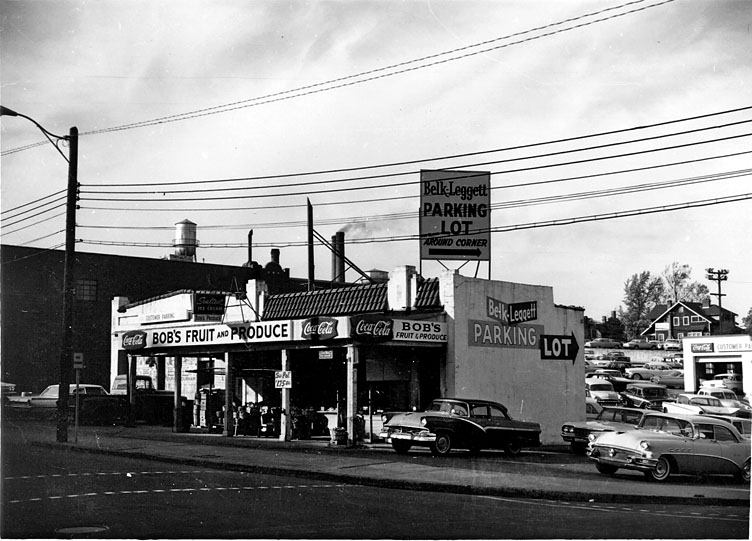 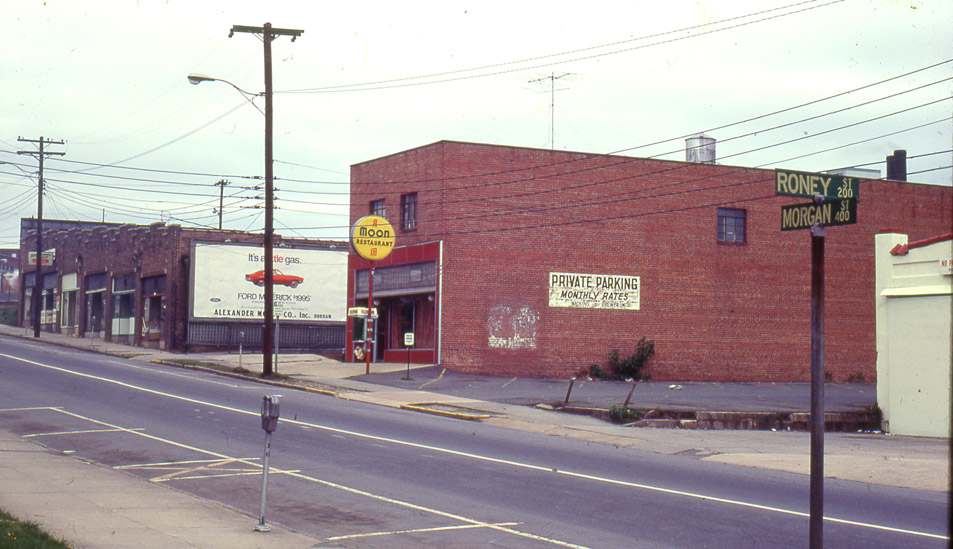 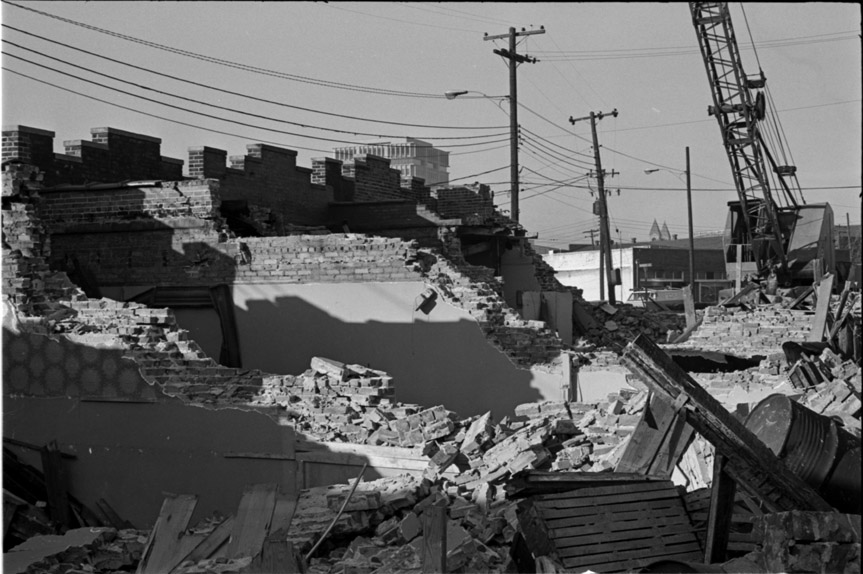 The 300 block was primarily home to the DC May company, which sold paint and wallpaper. I think this building was really interesting, with its metal pitched roof above/behind the one-story brick facade. 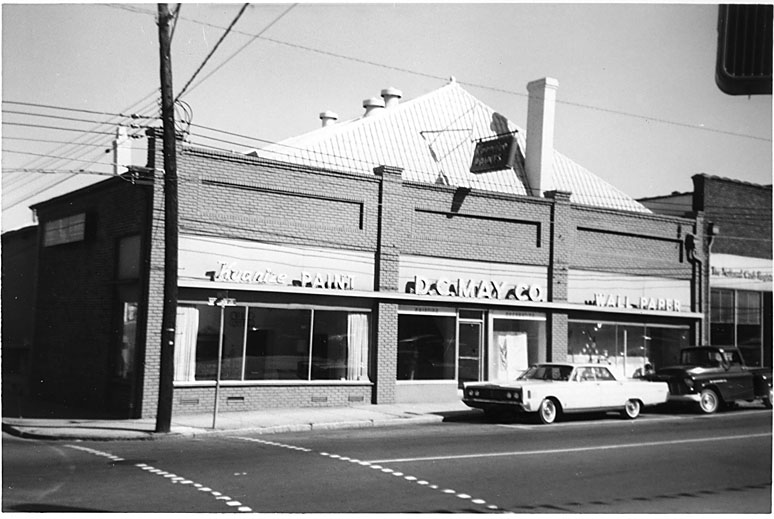 This is a view of the back of the building, looking south. 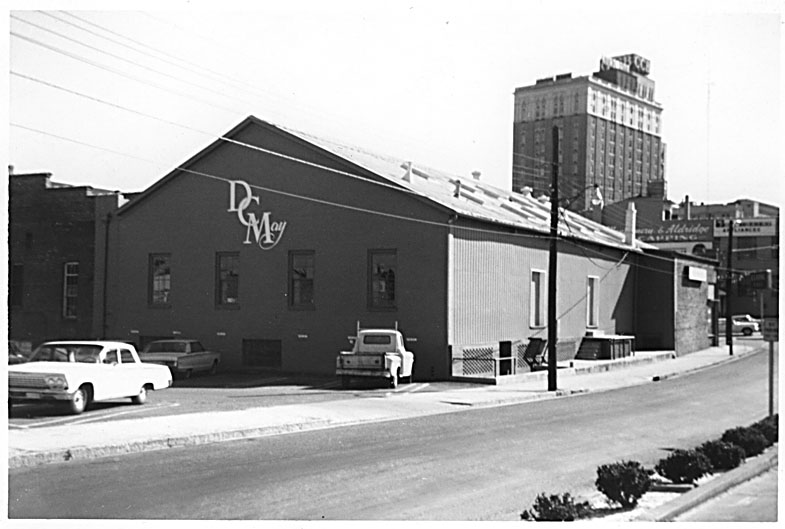 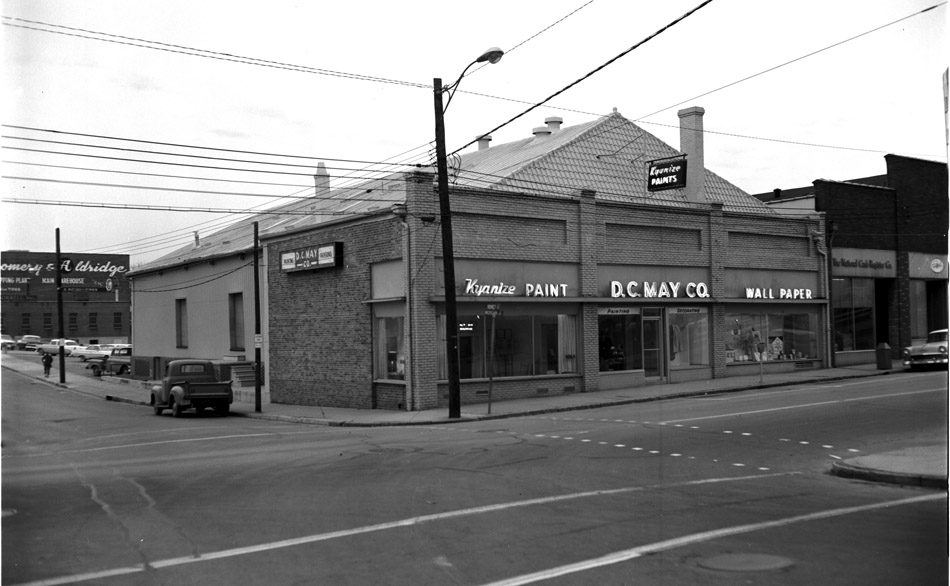 There were a few additional storefronts in the block, moving west to east: 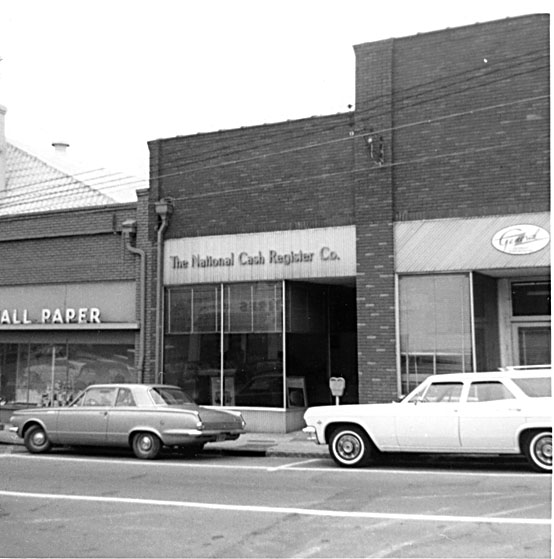 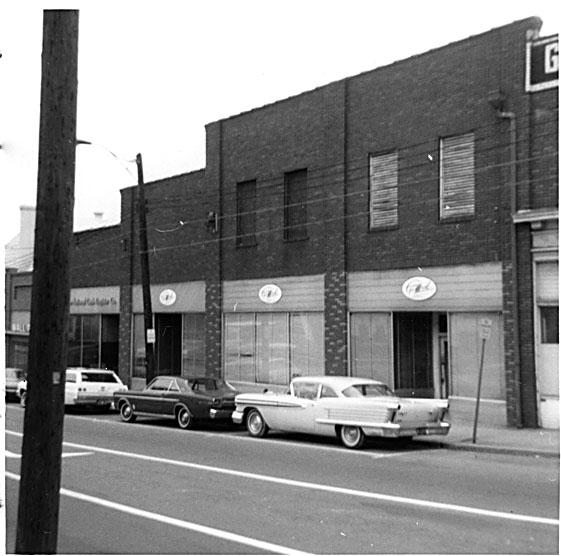 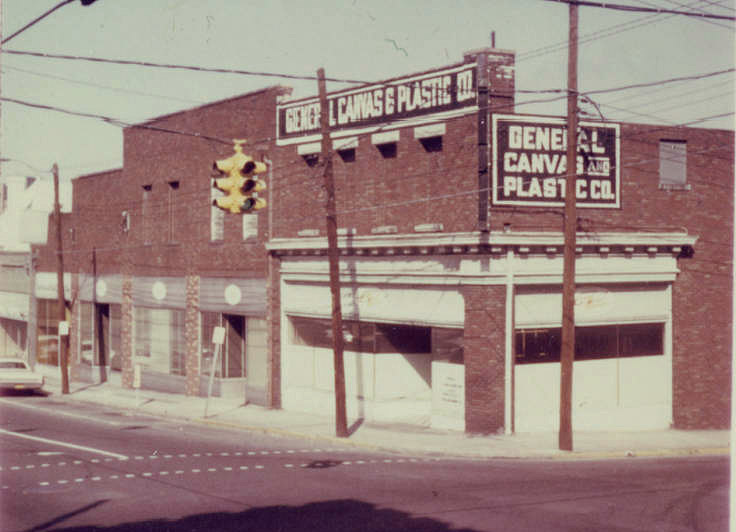 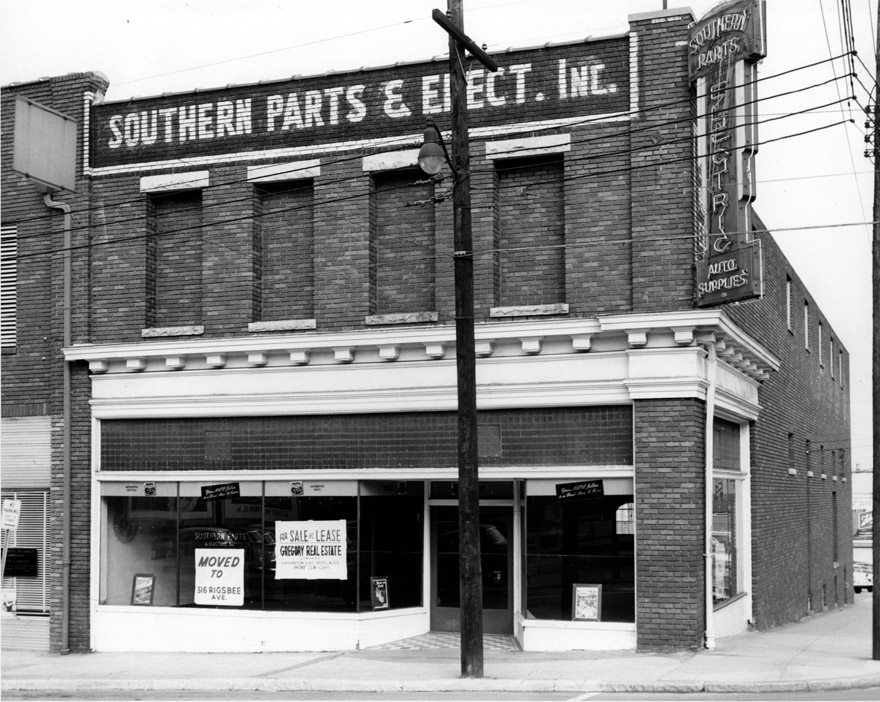 Finally, a view of the block looking northeast, late 1960s. 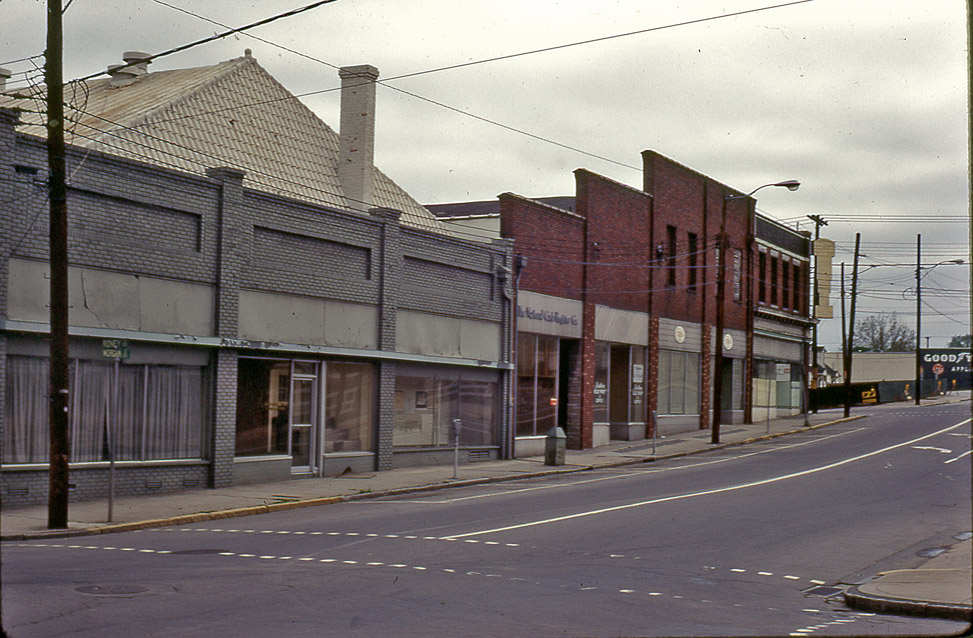 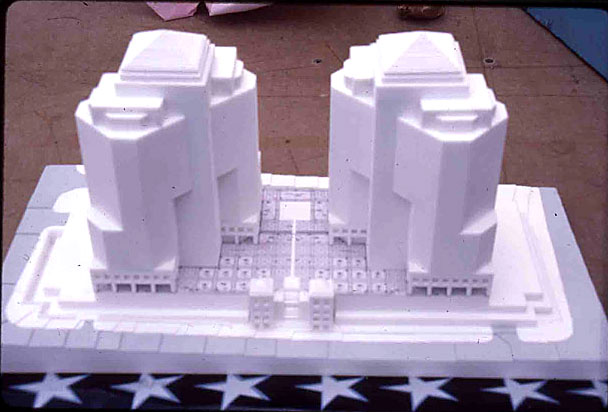 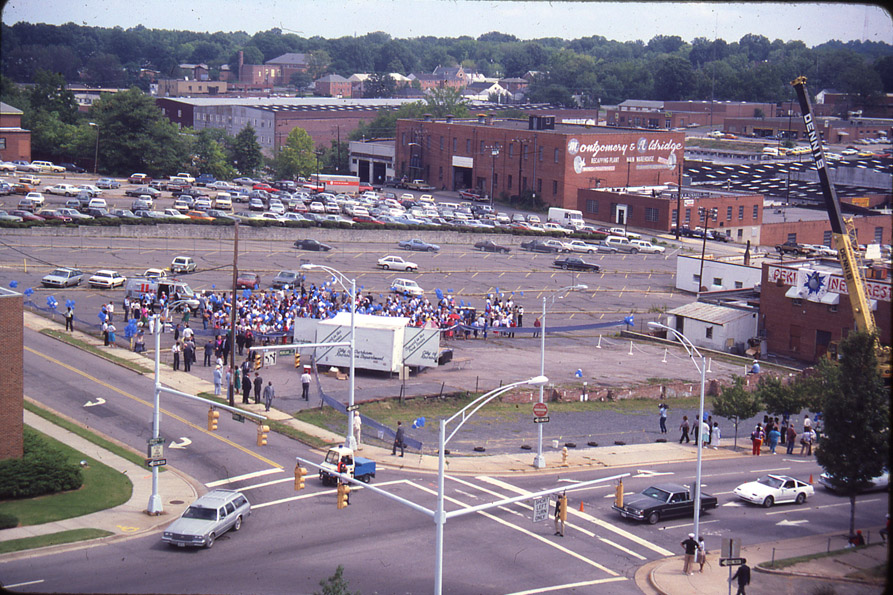 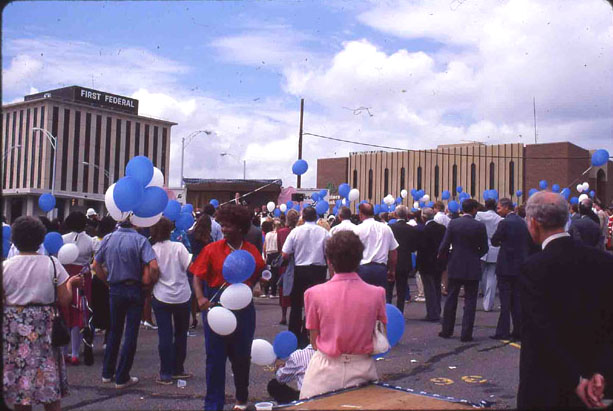 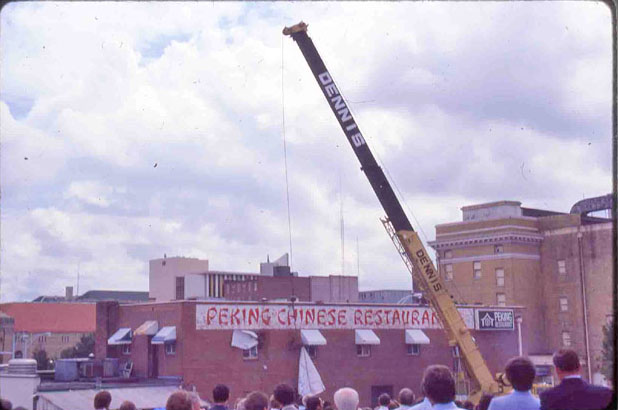 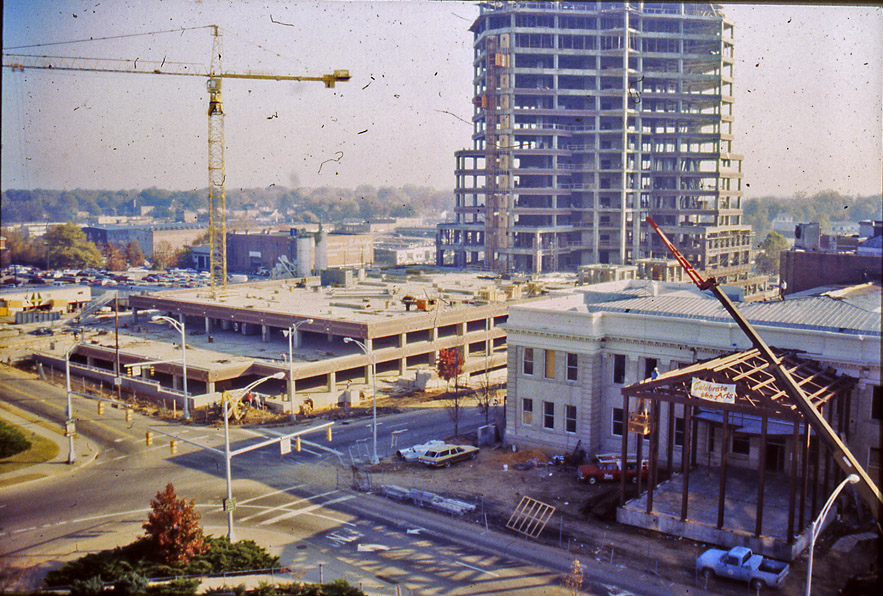 Gary -- thanks for the

Gary -- thanks for the interesting post. The photo of the wrecking ball taking out the Peking Restaurant, while onlooking Durhamites watch eagerly, captures in one image what you've been writing about here for this past year.

I'm glad I'm not the only one who can't figure out how the heck to get into the "Durham Centre" building. And I think you're right on about the Wittenberg condos ever happening. People moving to high-end housing in downtown Durham are going to want the American Tobacco/West Village/Brightleaf experience, not to live in a 1980s-style skyscraper on the Loop. Given the tremendous waiting list for American Tobacco residential, the fact that Wittenberg can't even pre-sell 40% of his skyscraper (and that he has seemingly moved on to creating the Duke Studio Condos monstrosity by the ATHD) tells me he's missed the market.

Thanks Kevin. I found that

Thanks Kevin. I found that image pretty striking (npi) as well.

The waiting list for AT was pretty eye-opening, wasn't it? I agree - If ind it hard to believe either that people would want to buy rooms in a ?1980s era hotel as condominiums or that they would want to buy crazy-expensive condos in a glass tower in downtown Durham. Maybe in 10-15 years, if AT Phase IV is done and all the talk about Central Park comes to fruition, that market will be there. Who knows if he will be.

It's really unfortunate that

It's really unfortunate that the streetscapes there were done so badly, because even if it's modernistic and all that, I actually find myself drawn to the tower. Particularly the viewshed from Corporation St. in the middle of West Village on a clear blue day, the brown in the tower matches the brick and the blue matches the sky. It's really a nice expression of what I'd go so far to call the color scheme of downtown.

The parking deck is in a useful spot, though, if it were only filled with street-level businesses. It doesn't seem like filling in the first floor along Morgan St. (and adding a real entrance to the building) would be that technically hard, but unfortunately the city owns the parking deck and Wittenberg owns the tower on top of it. (I believe Wittenberg got the city to agree to build a deck if he could find tenants for a tower, and they agreed, thinking it unlikely that this would happen. I think this is probably the last time Frank W. actually made a real estate coup.)

MichaelI think it is a really

I think it is a really cool building from a distance. I agree that the color/ materials are cool. And while it says 1980s, that in and of itself isn't bad - and may be historic someday.

It's the execution of the building from the street that I can't stand. The fact that it sits above the ground, entrance hidden from view feels like a spurning of Durham to me. Kind of like one-must-pass-through-the-airlock so there's no contamination from the street level. So it feels like a rejection of the street and city to me - something that is only reinforced by the intent to build luxury condos on the other side. Perhaps they'll put a helipad up on the plaza...

It's not as bad as the Renaissance Center in Detroit, by any means, but it has a hint of that 1980s rejection of the city (while still in the city) that the Ren Center is known for.

I don't know if these decks can be retrofitted - they usually have to be designed to allow that to be a possibility later. I would hope that could be done here, because right now, the Carolina Theatre is trapped on Morgan St., and there is very little that is redeeming about Morgan St. at this point.

you can park for free in that

you can park for free in that deck after hours if you drive past the entrance across from the carolina theatre plaza, take a right, and enter through that side. They usually aren't taking money at that entry. FYI.

Gary,
Your last post in response to Michael really speaks my mind. Not only is a parking deck an obvious bad choice for streetscape, but it does feel as though the whole building is shunning Durham by physically removing itself from the street. As you were so offended by the Duke Towers building at the corner of Trinity and Duke, I am so offended by this building on Morgan.
This building is socially irresponsible, creating an unfriendly, and I believe more dangerous street level experience. Shame on the architect.

That garage/office building has been a photogenic monstrosity for about 15 years now. Entry to the actual office building is from the elevators inside the garage. I don't believe there is actually an entry door, per se.

Half of the garage, from Morris Street down to the exit door opposite the backstage entrance of the Carolina theatre, is currently being repaired; I'm told the concrete was literally dissolving. Lovely.

You say that retail space is wanted there? Perhaps but... where would they park?

I really miss the Chinese restaurant that used to be there. I cried the day the wrecking ball took it down.

Add my voice to those who

Add my voice to those who actually like the way the building looks from a distance, while hating the street-level impact.

On Friday nights you could see this building from my front yard at 814 W. Markham, with fireworks in the background.

I have been informed that

I have been informed that circa 1972, the Chinese restaurant on this block was called "Four Seas"-- which is presumably an earlier incarnation of the "Peking Chinese Restaurant" seen in the demolition picture. In its heyday, the Four Seas was apparently the only Chinese place in the city.

I used to work in the

I used to work in the building back in 1991 when it was People's Security Life Insurance Co. The only business on the 1st floor was a deli-type restaurant which wasn't that great. Parking back then was $45 per month in the deck which was very high for that time. They had cheaper parking across the street but it was a dangerous/scary walk to the building in the winter when it got darker soon. It was a pretty building from the inside, though. Nice foyer/elevators.