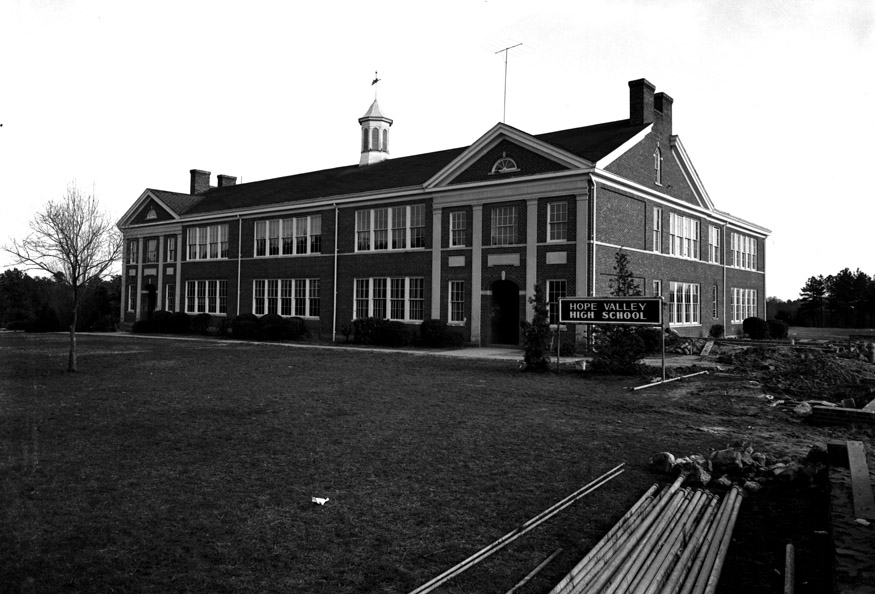 Hope Valley High sounds to me like some fictional high school for a teen-oriented TV show - but it was a real, honest-to-goodness high school.
The school was built in 1928. 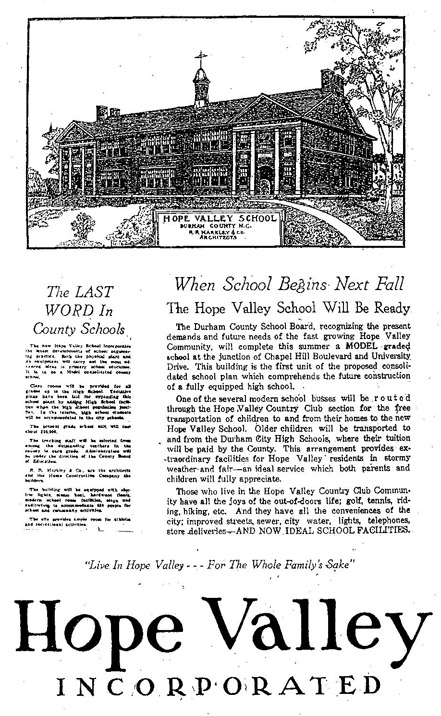 At some time in the 1950s, it became an elementary school.

The school closed in 1993. On April 8, 1996, five 12-13 year olds thought it would be an awesome idea to burn things inside the old school auditorium. They managed to escape the school, and completely destroy it. In the fall of that year, the remains of the school were razed. DPS received a $1.8M settlement from the insurance company - and the insurance company tried to sue the teenagers to recover the money, unsuccessfully.

Approximately a year later, DPS open a new Hope Valley Elementary on the site. Not to pick on this school in particular, but I'm not sure why modern school architecture has to be so miserably bad. There's little to architecturally distinguish this exterior from a light industrial facility in RTP. Chipsets, students, widgets, whatever. 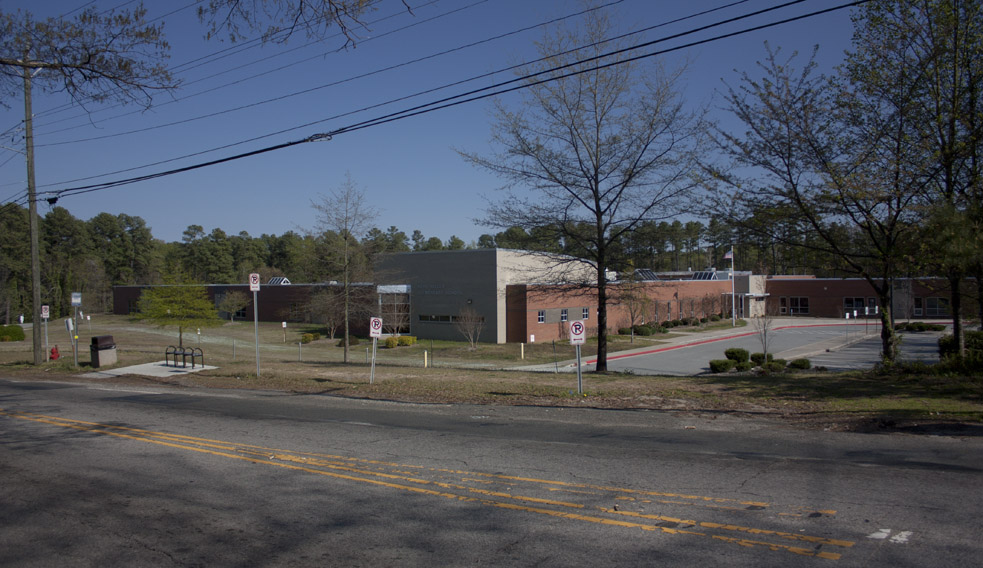 Great school! I have so many

Great school! I have so many memories, and can recall the layout of the buildings in great detail. So sad it's gone...

Why are schools so obsessed

Why are schools so obsessed with avoiding staircases these days? YO... have you really never heard of the Americans with Disabilities Act? Go check it out!

Not to pick on this

Not to pick on this school in particular, but I'm not sure why modern school architecture has to be so miserably bad. Come one, what better way to introduce kids to the massive over-incarceration problem in the US than to educate them in a school that looks like a minimum-security prison...

I went to kindergarden at

I went to kindergarden at the old school, and my sister through second grade. I of course don't remember a huge amount of it, but I do remember being disheartened when I saw the newly built one in the 1990's. For one thing, why are schools so obsessed with avoiding staircases these days? Are ADA laws that onerous?

CommunityOrganizer: the solution when I

CommunityOrganizer: the solution when I went to school was to install an elevator. As costs go, sprawling over ever more real estate is really cheaper than an elevator? (And given that my comment mentioned the ADA, you might have realized that I'd heard of it.)

I went to Hope Valley

I went to Hope Valley Elementary for grades 2-6. In addition to the main building and the gym there was at that time a classroom building that was low, rectangular, and flat-topped. Pretty blech. Speaking of staircases, I remember two things about stairs in the main building. One is that my sister wiped out on the exterior fire stairs and wound up in a leg cast for six weeks. The other is that the main stairway's handrail was always super-waxed shiny. We slid down it all the time, which was great fun.

Seth HV, Inc. was the

Seth HV, Inc. was the successor company to Mebane and Sharpe, developers of Hope Valley, the neighborhood and golf course. More on HV coming up next week (I think.) GK

Do you know what 'Hope

Do you know what 'Hope Valley Incorporated' indicates on that flyer? Seth

I'm thinking more modern times. I have never seen a modern developer advertising schools in such a manner. They mention them....alongside ads for cookie cutter homes. I wondered if there was an attempt to incorporate the Hope Valley area as a town at some point. Bahama found out that can't happen.

My mother graduated from Hope

My mother graduated from Hope Valley in 1941 and was the long-time president of the Hope Valley Alumni Association. Keep in mind that the "high school" name is something of a misnomer. Hope Valley initially held grades 1-11, and by the time I arrived there in 1954, it held grades 1-12. After 1955, Hope Valley held grades 1-8. Eventually it became k-7 and then finally k-5. I spent 8 years at Hope Valley and then entered 9th grade at Southern. My great-aunt taught 4th grade at Hope Valley for more than a decade. For many years after the last high school student graduated from Hope Valley, their framed photographs graced the walls of the old auditorium, and some of my classmates would point out their parents and aunts and uncles among the graduates. The school grounds held the main building, a two room frame classroom building (originally the cafeteria), a large frame gymnasium, a brick home-ec building and a brick principal's house. The principal throughout all my years at Hope Valley was Norfleet Vincent and he always lived in the house on the school grounds. In the far north-west corner of the school property was a stone, slate, and grass platform and a tall pole used as a May Pole. I have a photo of my mother in her May Day finery posing with the May Court on that platform. The "mess" to the right of the building in the 1950's photo is construction material for the first of two additions. The first, completed in 1954, was one story and held four or five classrooms and a new cafeteria with a delightful hand-washing fountain in front of the main doors. The second addition added about five more classrooms and a library. I have something in common with Dan Lerner's sister; I also wiped out on the fire escape. I spent a week at old Watts Hospital for surgery and traction and then nine weeks in a straight cast from thigh to ankle. (That was long before I was Dan's English teacher at Jordan.) Those fire escapes, at the rear of the building on the north and south ends, were treacherous. There were also basement rooms on the north side of the old building.

I was driving to get

I was driving to get some home cooked mom food, coming from NCSU when I drove past this burning school. The firefighters had just started pulling up so I parked down the street and watched it burn for a little bit. The flames were HUGE and nobody believed me when I called them and said guess what, HVE is burning! I didn't know it was kids that did it, I think the school had been boarded up for as long as I could remember. I went to Pearsontown.

The Gym at the rear

The Gym at the rear of the property and the 1950's cafeteria still exist and are incorporated into the new building. Also, it does seem as if the cafeteria and library have swapped places. I attended HV from 73-77, and my mother and aunt graduated from HV in the early 50's. I can close my eyes, and envision every square foot of the old school.

My husband, his borther and

My husband, his borther and his father went to Hope Valley and I had the pleasure of serving as a volunteer at Hope Valley when our children were enrolled there.  I later had the pleasure of working at the old school site and the new site.  I would like to make a correction to JMeade's post, the gym and the kindergarten wing was saved and incorporated into the new building.  The cafeteria was damaged by the fire and had to be removed.  It was my responsiblility to oversee the transport of all the personal teacher material and school material to the new school, Forest View Elementary.  My husband came by the school that afternoon and walked with me through the whole school to make sure that nothing was let behind.  It was a little sad, but at the same time we were all looking forward to working in a new location.  While doing the walk through, closing and locking each door, my husband talked about all the fun times he had as a student at Hope Valley and he too did not like the exterior stairs.  Every time we would  have a fire drill I prayed that no student would fall down those stairs.  I was glad to see them go.  My husband and I were in the area when the school burned down, we stood and watched with mixed emotion.  When the new school was built I had the pleasure of working with the new principal to get her ready for the fall.  I had began my career with Hope Valley and I was ending my career at Hope Valley, I retired from DPS after 25 years of service.  To Curtis, I had the pleasure of working with your mother when the school closed for a final reunion for all Hope Valley grads and to also open the new school for a private tour to any of the grads that wanted a look.

Carol Rigsbee, Thanks for the correction. I

Carol Rigsbee,
Thanks for the correction. I toured the new school several years ago, and it seemed as though the old cafeteria was still there, only being used as the library now. As I said earlier, I was there for 4 years, and can recall the layout of the school with great detail. For some reason, if I watch the John Ford movie "They Were Expendable", as I see the scene where Robert Montgomery is walking out of the briefing room and into a darkened hallway near the start of the film, it's almost like standing in the breezeway hall and looking into the original section at night, as I did several times during Hope Valleys Halloween carnivalsmany years ago. If you have other memories of the school, I'd love to hear them.

I attended the old Hope Valley for K-1st grade

I attended the old Hope Valley for K-1st grade('91-'93). We were the last students to attend the old building. I wish they wouldv'e at least made a contemporary version of the original building.

I used to go to the new hope valley elementary,

I used to go to the new hope valley elementary, and you're right in thinking that the architecture is ugly.

I went here through 6th grade, the last year they had a sixth gr

I went here through 6th grade, the last year they had a sixth grade. When I heard it had shut down, I went over to the campus and took pictures of the buildings. I'll have to scan them to get them online. They were taken in '94, so all of the old buildings were still there. Kind of sad and ghost-townish, though.