The 200 and 300 blocks of South Gregson were residential in character through most of the early 20th century, becoming progressively more commercial during the 1950s, 60s, and 70s.

Above, the section of South Gregson between the railroad tracks (West Pettigrew) and West Chapel Hill St, 1948. Aside from commercial buildings at West Pettigrew (the Cooke's Cafe/former grocery profiled last week and Ingold Tire across the street - on the west side of S. Gregson) the remainder is residential. Burch Avenue exits the bottom (west side) of the picture and Memorial St. the top (north side). Note also the large field next to the Duke Memorial Church (behind the sizable house on West Chapel Hill.) Evidently neighborhood kids used to play baseball on this field, and were known to have knocked out a window or two on the church building next door. The house on the northeast corner of Memorial and South Gregson was evidently used as an office for the Durham Dairy Co. by mid-century

By 1959, the character of the neighborhood has become more commercial. 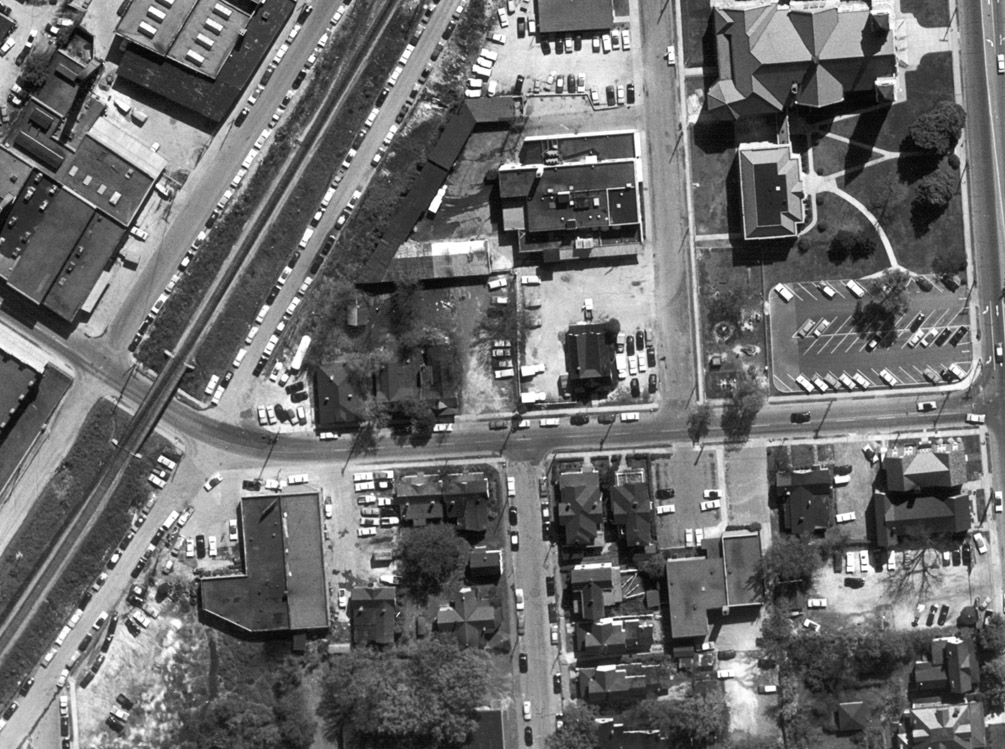 The commercial structure at the southwest corner of West Pettigrew and South Gregson has expanded, and two houses have been taken down for the original portion of the Medical Arts Building. Surface parking has increased throughout the neighborhood, taking the place of several houses. 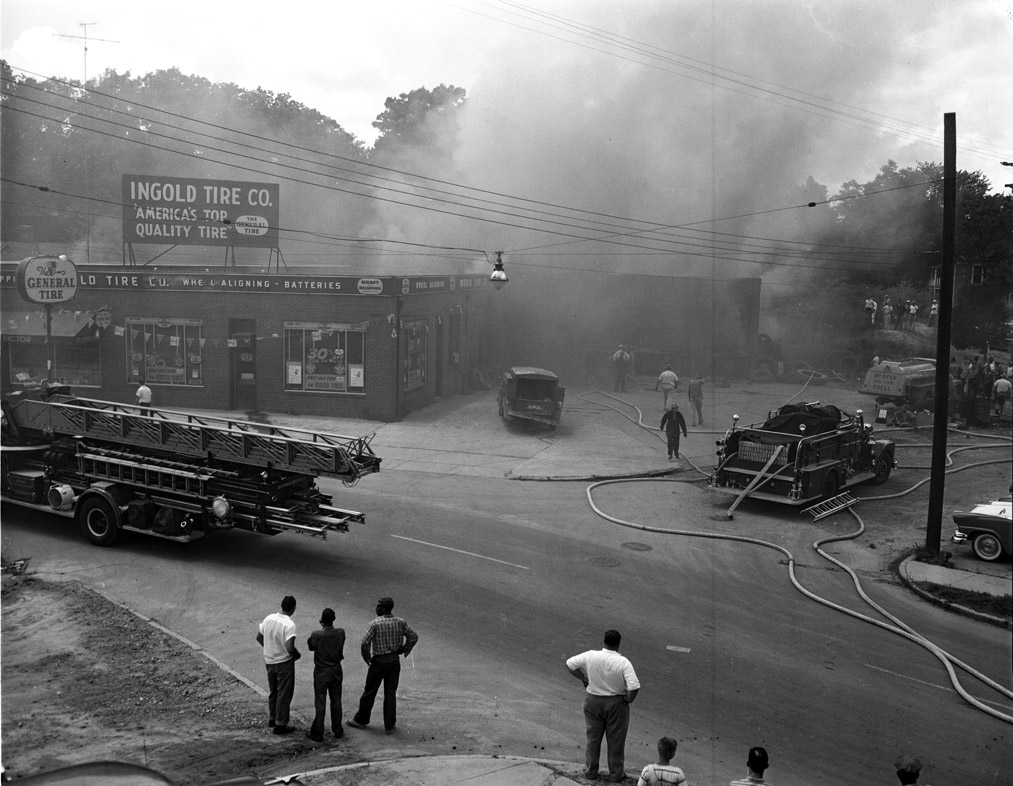 Above, a fire at Ingold Tire, on the corner of West Pettigrew and South Gregson - looking southwest from the railroad track, 07.15.58
(Courtesy The Herald-Sun Newspaper

Looking northwest past a new addition being built for Duke Memorial Church at South Gregson, January 8, 1964 - the parking lot in front of the Medical Arts Building is visible at the left edge of the picture, and some of the remaining houses at Burch and Gregson are to its right. The unidentified commercial building is just to their right, at West Pettigrew St.

By the later 60s, most of the remainder of these houses were taken down - the Medical Arts building expanded to Burch, and office buildings were built on the east side of the street. The Durham Freeway severed this area from the rest of its original neighborhood to the west, now known as "Burch Avenue."

The only remaining residential structure in this area is The Eloise, the Bill Fields-owned apartment building at South Gregson and West Chapel Hill.

I decided I would only dignify the Medical Arts Building with a partial view. If you want to get a sense of the condition of that Bill Fields-owned blight, you can look at my original post about that building from November 2006, because nothing has been done to improve that building since then. (And if you want to understand why I make that point, read the comments at that post.)

I consider this section of Gregson - from the tracks to the Freeway - as one of the most persistently downtrodden-appearing areas on the west side of town. It frustrates me that it looks exactly as downtrodden as it did back in the mid 1990s. I continue to hope that something will improve along here - although if Ronnie Sturdivant and Bill Fields have anything to say about it, it seems that it never will. This area is what I consider prototypical of a priority areas for development assistance/incentives and blight penalties - the moat of desolation separating Brightleaf and downtown from Morehead Hill/ Forest Hills / West End / Burch Avenue.

The church is such an oddity

The church is such an oddity in this depressing little area, being still in use AND remaining in good condition. With Fields (and, even worse, Sturdivant) owning the surrounding land, it seems unlikely anything will change for the better.

I live on Burch avenue, and for some reason I find the tiny little remnant of Burch especially disheartening.

I am a member of Duke

I am a member of Duke Memorial Methodist Church. A couple reasons we have been able to remain vibrant in this downtrodden area... we have a vigorous weekday school and mothers day out program, we have traditionally had a fairly wealthy congregation, but perhaps most importantly we have an endowment from the Duke family that is restricted to upkeep of the buildings and grounds. Until recently it covered most of our building related expenses, it does not now, however.

On another note I can remember as a child coming to the Medical Arts Building on Burch Avenue, and remember too the large frame house on the corner of Burch and Gregson in the el of the expanded building. The house hung on a long time and was the last one in the area for many, many years. nothing has ever been built on the now grassy corner in over 30 years.

A bit off topic, but I was

A bit off topic, but I was looking back at your old "guest cities" blog. I was reading about Greensboro. You guys seem to be all about prasing it.

However, don't you feel like it's just like a team getting a new ballpark? It's all shiny and new, but it will slowly fade away. The new downtown seems much quite Disny-fied (like American Tobacco).

From what I've heard, the dowtown is getting a shit ton of money and leaving very little for the rest of the city. Sounds familiar...

Oh, and thanks for doing

Oh, and thanks for doing another piece on the lost parts of Burch Ave. I was wondering how the area looked before the freeway it down. I would see them and think "GAH! it would have been so much easier to go downtown!"

It makes me sad to see the

It makes me sad to see the old medical arts building go to wrack and ruin. My childhood peditrician's office (Dr. London) was in that building. I remember a large fish tank in the waiting room which was an endless source of fascination as I waited for check-ups and shots.

208 South Gregson, the second house in from the Burch Avenue/Gregson Street intersection in that 1964 photograph, was occupied by Thomas F Andrews in 1932. He was a grocer who worked at 2820 Angier Avenue. I only mention it because that building still exists, but may not soon. It's an attractive structure that's been recently boarded up.