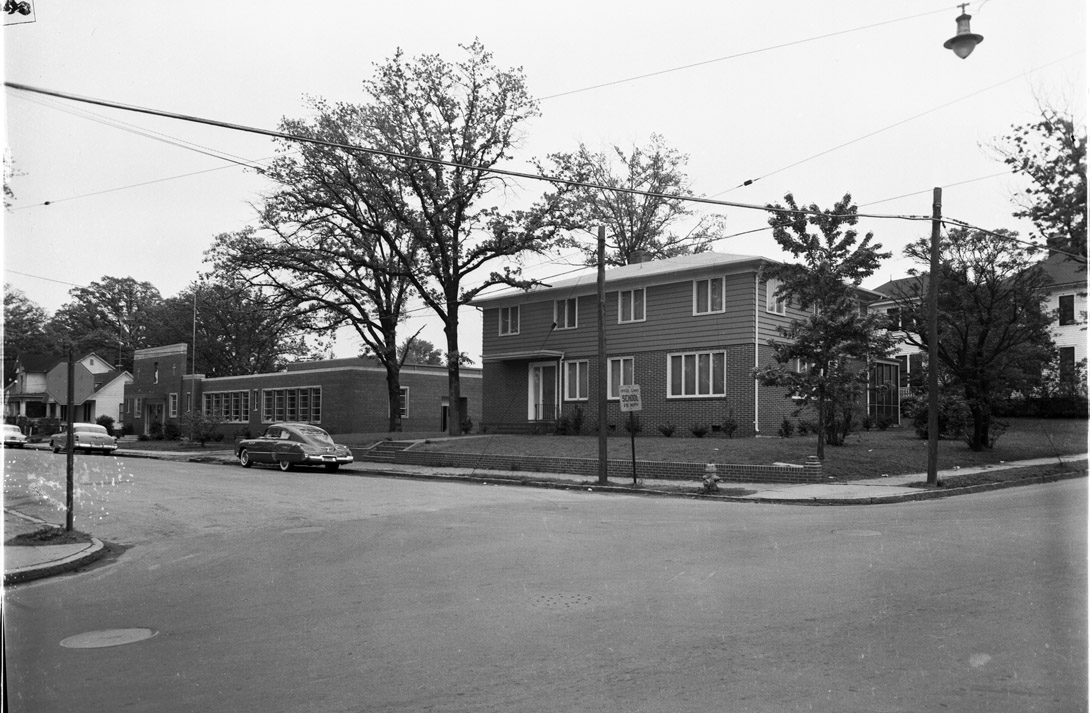 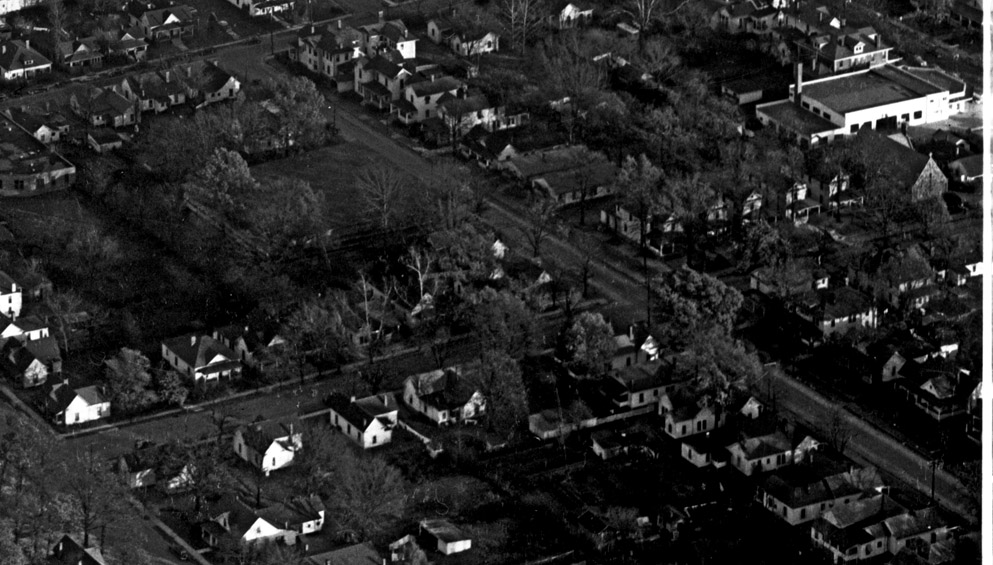 There aren't many pictures of the 600 and 700 blocks of Burch Avenue to go by, but the above aerial shot, with Burch the longest street running diagonally from upper left to lower right, gives you a sense of the neighborhood scale. It was much like the still-extant neighborhood to the west of Buchanan Blvd. - mostly smaller houses, mostly from the 1910s and 1920s. 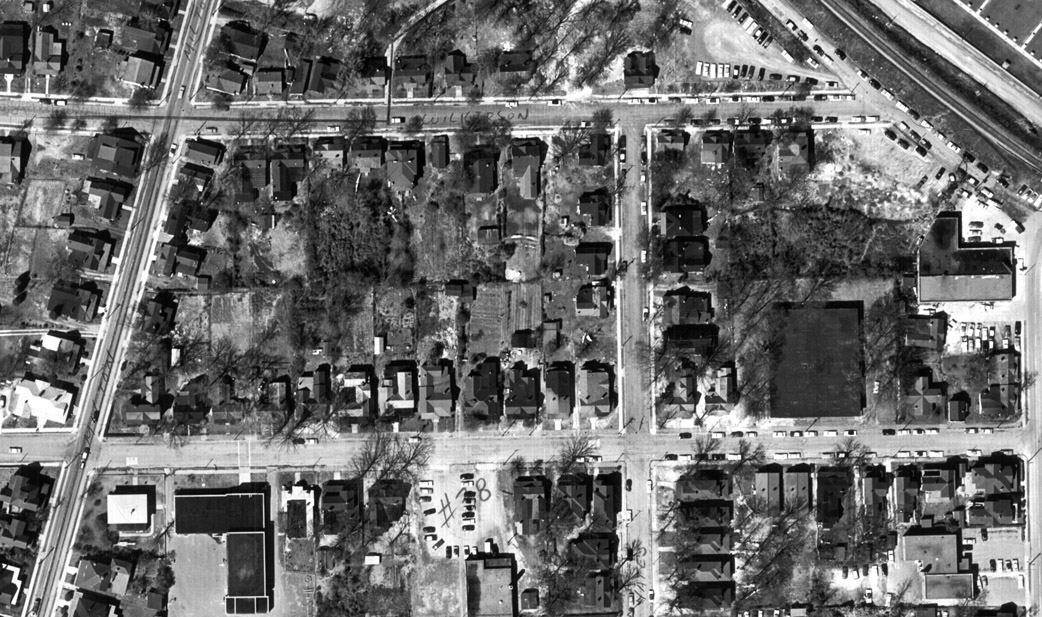 A direct aerial view of Burch Avenue, 1959, shows the residential character of this portion of neighborhood, excepting commercial uses increasingly present near Gregson, on the right - the large 'square' is a Liggett Warehouse - known as 'the Green Shed'.

Near Milton / Buchanan, Immaculata Catholic School decided to expand with new buildings in the mid-1950s. The original school was located on West Chapel Hill St., adjacent and just to the east of the original sanctuary. It was torn down along the the sanctuary, and a new school building and administrative building for the Sisters of St. Dominic were built on Burch Ave. The buildings were built by George W. Kane, general contractor.

From 1967-1969, the Durham Freeway was built just up to this point - it extended no further north than West Chapel Hill St., although the houses on Burch Ave. were demolished to make way for the big looping exit ramp for northbound cars to exit onto West Chapel Hill. 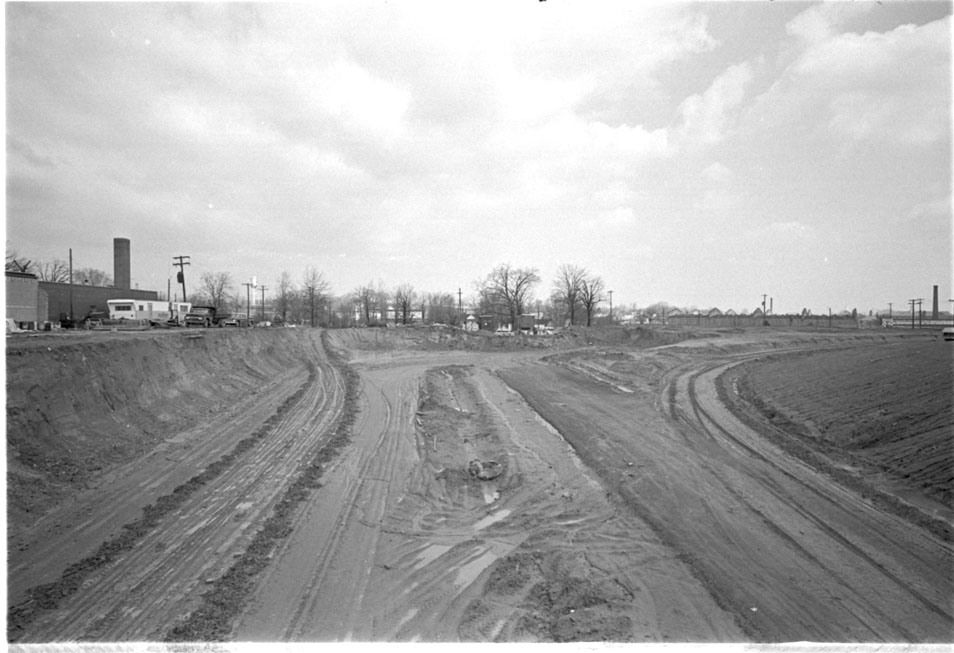 I'm not sure what year the Freeway was extended to Swift, and then to Erwin - certainly by the 80s. 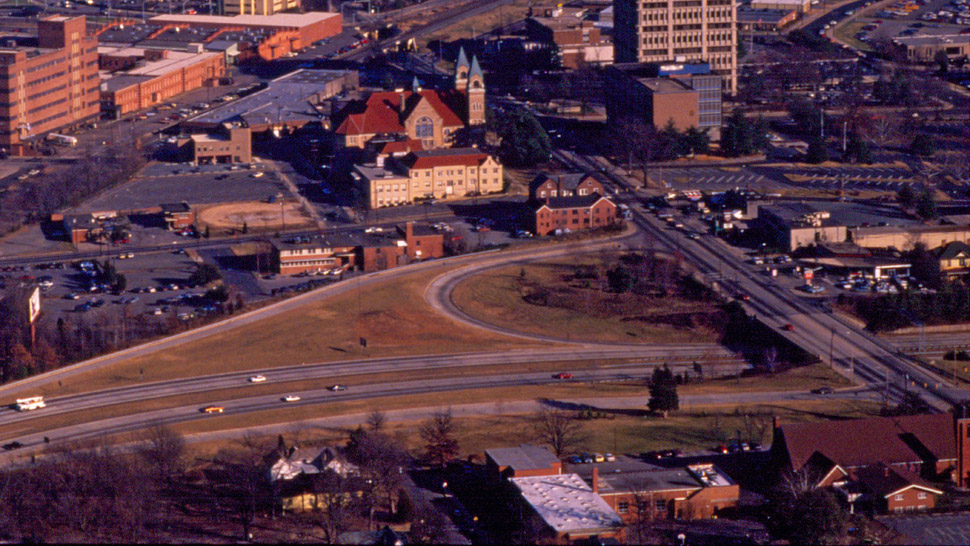 Immaculata has continued to expand the school (adding a second story, and expanded into the land on the north side of Burch. The former "Sisters of St. Dominic" building on southwest corner of Burch and Buchanan is gone, replaced with the back of the Emily K. They've expanded into almost all of the remaining space between West Chapel Hill, Buchanan Blvd., and the Freeway.

Looking southeast from Burch and Buchanan, 04.23.08

Since churches and schools Must Expand, it seems, I guess I'm glad that Immaculata had this space to expand into, even as they took down the few remaining houses on this block. As little as I wanted to see them go, I'd rather Immaculata do their business over here than chomp into the contiguous neighborhood fabric - like Healthy Start plans to do a few blocks away, or NC Central will do in decimating College View.

The question is, will Immaculata be content with this campus? Or will they eventually begin acquiring across Buchanan?

To a broader point, how do 'non-profit' churches and schools have so much money for land acquisition? When we hear about money desperately needed to do good deeds, buy books, feed the less fortunate, etc., how much is actually going towards land banking to expand the Good Deed Business, Inc.? Some of the real estate holdings of churches and schools - particularly in Durham's impoverished neighborhoods - are astounding. I'm talking blocks of houses/land.

Interesting (and curious) to

Interesting (and curious) to me is that there are still two modular homes that I guess are rented on the Immaculata side of Buchanan - I have no idea if the church owns them or not, but it would be a logical move to buy them and expand there. It's a bit selfish of me, but I kind of wish they would take those structures over, since they're really ugly.

I don't know what if any plans Immaculata has to expand, but it seems to me it would be awkward to try and gobble up land across the street. Several of those houses either have been or are currently being renovated.

The two houses are owned by Lee Ray Bergman/ Bergman rentals - purveyors of low-quality dwellings to those who can't afford anything else Durham-wide for over ?25 years. No idea how long - but a long time.

Wish I could find an article from the late 1990s about our local slumlords - I think it was in the Independent, but perhaps the Herald. I don't know how company practices have changed, if at all, but the article was, in a word, disturbing. It was the kind of good local investigative reporting that we just don't have anymore.

I would have to speculate that Immaculata has tried to buy these houses, and the Bergman Company has probably asked for a very high price.

I agree that it is unlikely that Immaculata would expand across Buchanan. But I've learned never to doubt the real estate ambitions of churches and schools. I never would have thought NC Central would expand across Fayetteville into a stable, nice neighborhood that grew up with their campus.

Gary - on my block, the rental housing that is owned by the Bergmans is probably the best maintained, most continuously rented, and least troublesome. I've been told that first the daughter, and now the son, have taken over day-to-day operations of the company. They are by no means perfect, but compared to, say, Rick Soles' management, they're more than acceptable.

BarryGood to know things may

Good to know things may have changed - and I can provide some additional anecdotal evidence that the Bergman-owned house 1/2 block from me that spent awhile as a crack den has been cleaned up, so maybe things have changed. Admittedly, much of my perception was colored by that article, which detailed financial and management practices that were abysmal.

Many times, wealthy members of congregations buy adjoining lots, houses etc for churhes. This is especialy true in urban areas. Expansions by St Phillips, Trinity Ave Pres., Duke Memorial, and others have been funded by large tax deductible gifts.

Re freeway: I remember it

Re freeway: I remember it ended at Chapel Hill Street probably up until the time we left for a year in England, 1973. The extension to Erwin Rd. may have been completed by the time we got back in 1974 or perhaps shortly thereafter. I remember being driven east down Burch to The Medical Arts Building (it was where we got all our family check-ups), and then later realizing that that route was Gone.

When I remember my family

When I remember my family going to the Medical Arts building, the route down Burch was already gone.

When I was at Immaculata, the Sisters of St. Dominic were still teaching there. I wonder when they left and what happened to them.

Thanks for this blog! I stumbled upon it looking for information on other Durham sites I remember from childhood ...

I am currently working on an

I am currently working on an oral history of Immaculata. This blog has been helpful in understanding the geographies and histories of this small part of Durham. Wherever Immaculata is headed, it certainly possesses a storied past. Thanks.