The fourth and last of the main telephone exchange buildings established downtown, and the only one dedicated to the purpose, was the building at 104 Holloway St. The telephone exchange had begun on the southwest corner of Church and East Main Sts. in 1895, then moved to the First National Bank Building, then in 1904 to the northeast corner of N. Church St. and East Main St. Ongoing expansion of telephone service
led to the Interstate Telephone and Telegraph Co. building a new telephone exchange structure at 104 Holloway St. around 1920. In the clear-as-mud language from the 1953 Herald-Sun that describes the development of this building:

I hope future readers find my writing about development easier to follow than this. In 1933, the nterstate Telephone and Telegraph Co. changed its name to the Durham Telephone Company. 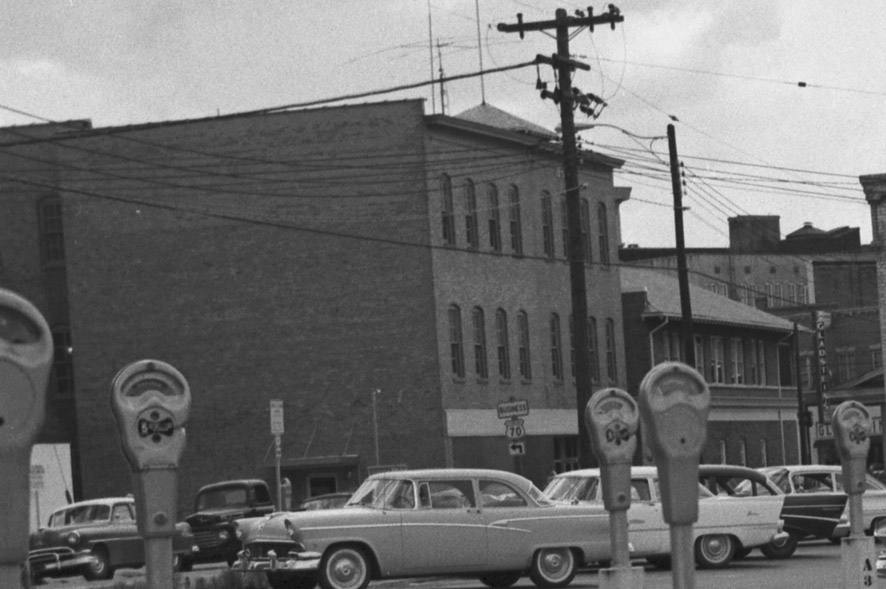 Below, a view showing the windows on the east side, and the addition extending east from the rear of the building towards Trinity Methodist. 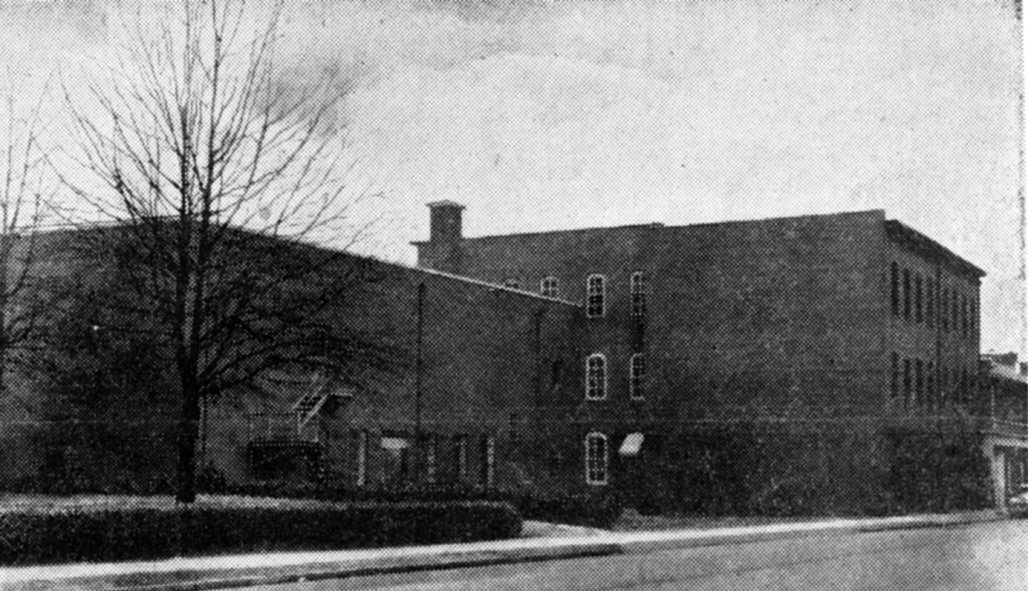 In 1953, it was noted that the Durham telephone company provided service to 29,300 stations from three exchange buildings in Durham. This building, the main exchange, housed 6600 lines of central office equipment, and a $0.5 million addition was about to add another 8800 lines. 104 Holloway housed general offices and the commercial department on the first floor, switching equipment (and the offices of the vice-president and repair department) on the second floor, and accounting, billing and information departments on the third floor.

And a blurry view from the other side, looking southeast, 1966. 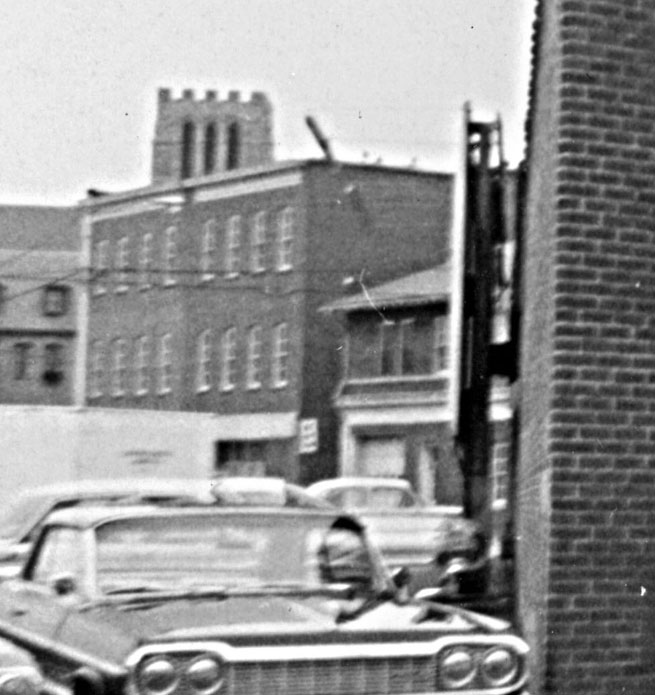 This shows a simple building with nice-appearing Italianate windows.

In 1967, General Telephone built an adjacent addition on the east side of the building, and, at sometime soon thereafter, the entire front of the original building was covered with the aforementioned yellow nastiness. 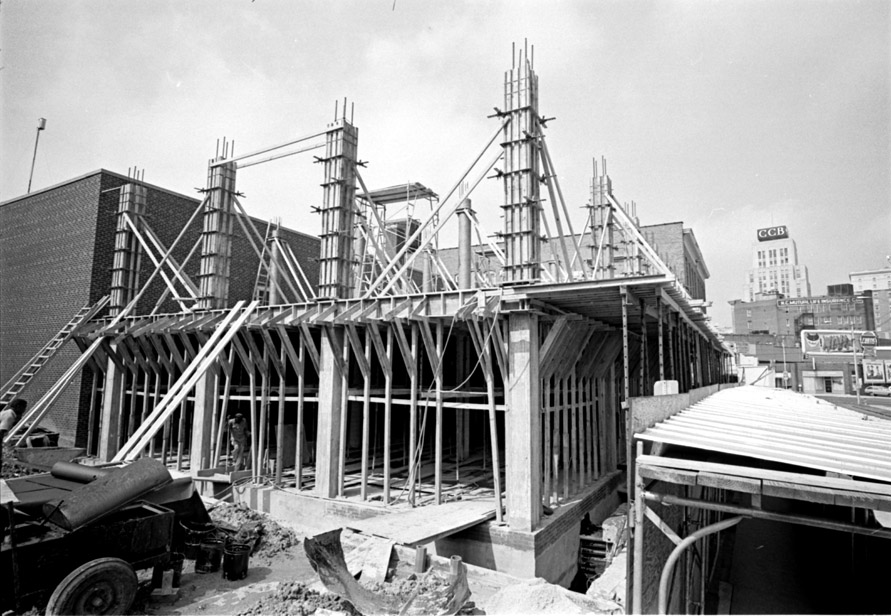 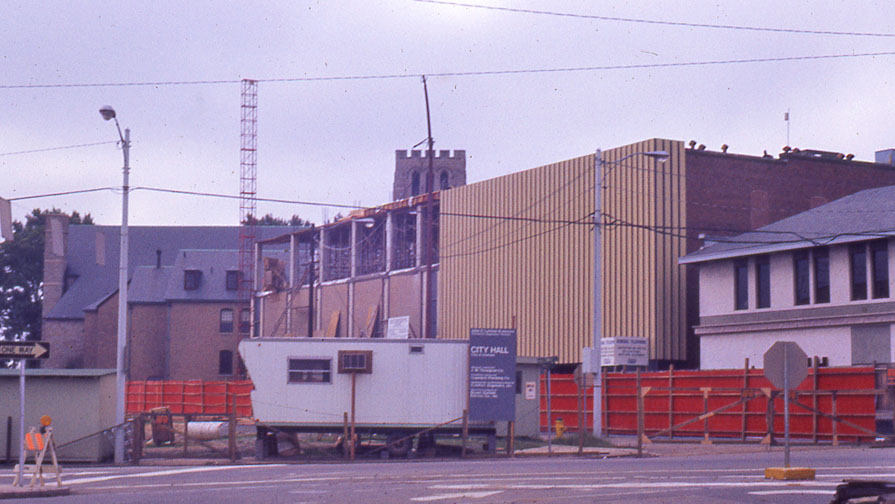 (These dates don't quite add up unless they did two separate construction projects on the addition.) 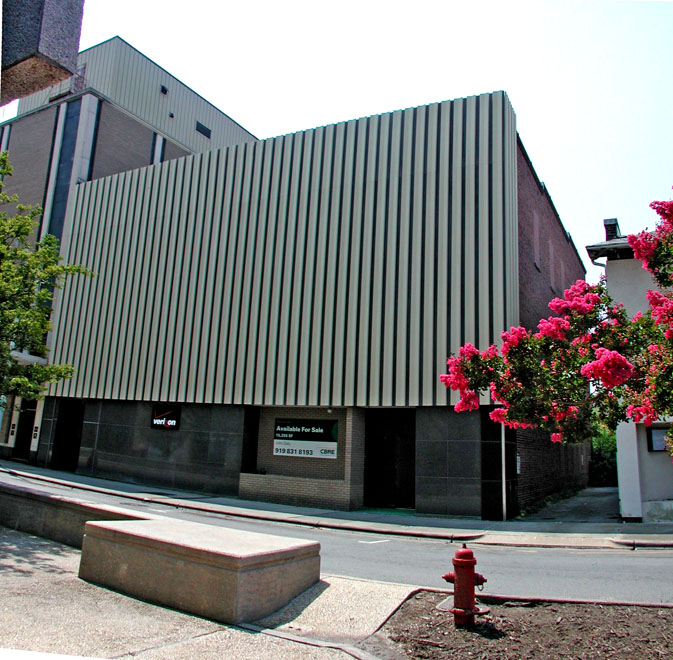 This building is actually available on the commercial real estate market currently. They must expect some silly sum of money for Greenfire (which owns three adjacent buildings) not to have snapped it up. I contacted the company to find out the asking price. "We don't have an asking price" was the answer. Oh really. My bit of (free) real estate advice. 1) Peel off the yellow junk, and 2) you're not selling the Burj Dubai - get a price.

So Greenfire did eventually buy the building, and peeled off the nasty facade material, revealing the nice brick underneath. 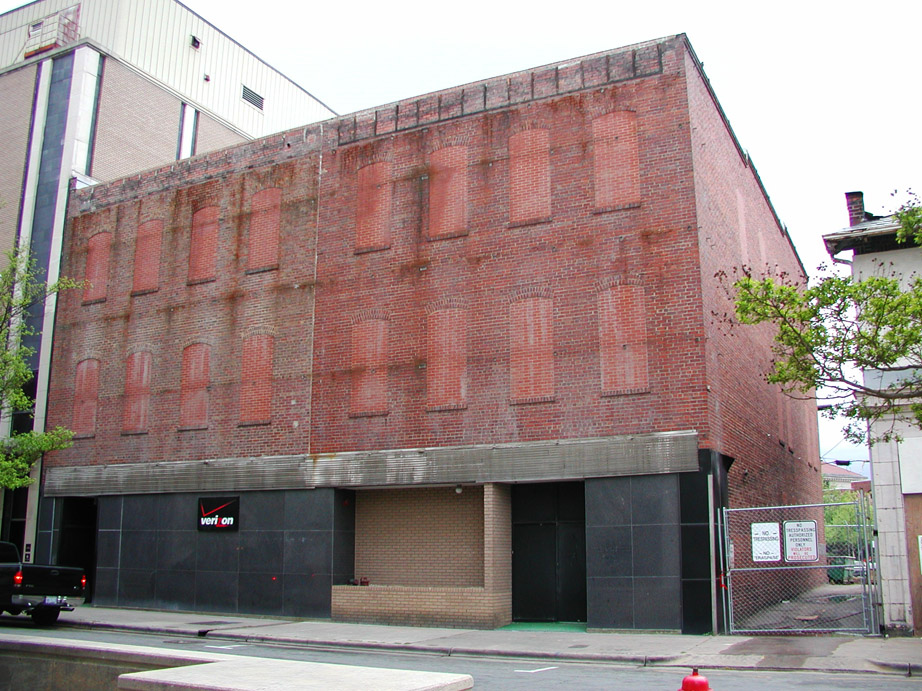 I've heard it mentioned as a part of their Rogers Alley re-development, which includes the Fire Station No. 1, Rogers Drug Store, and 107 East Parrish. I haven't heard anything in particular about intended use for this building, though. 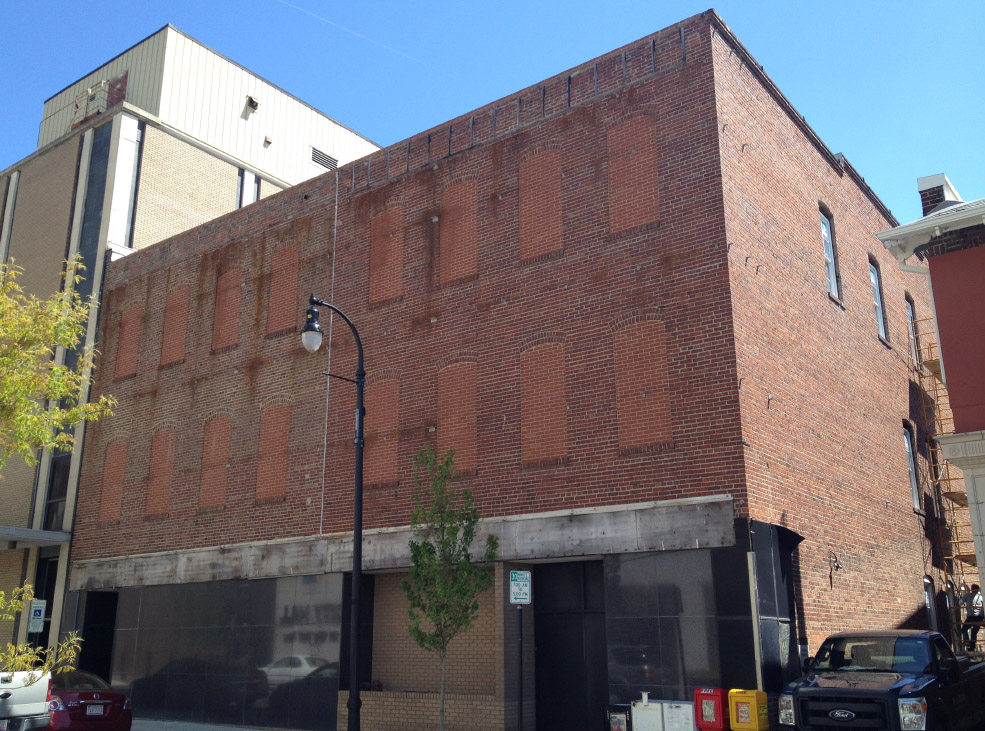 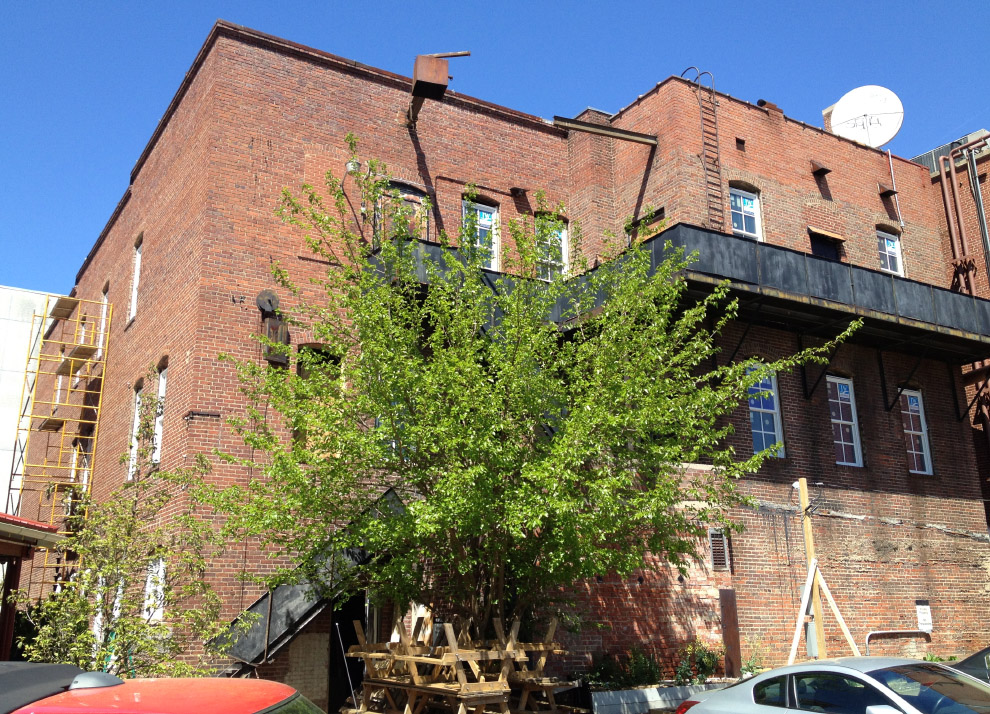 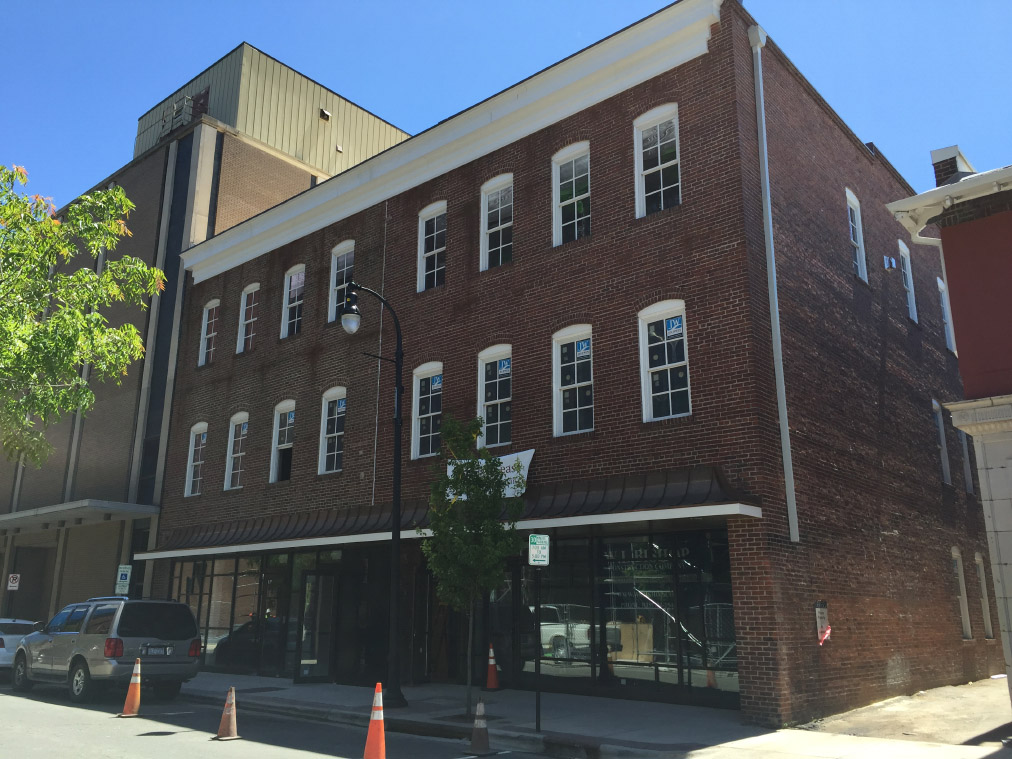 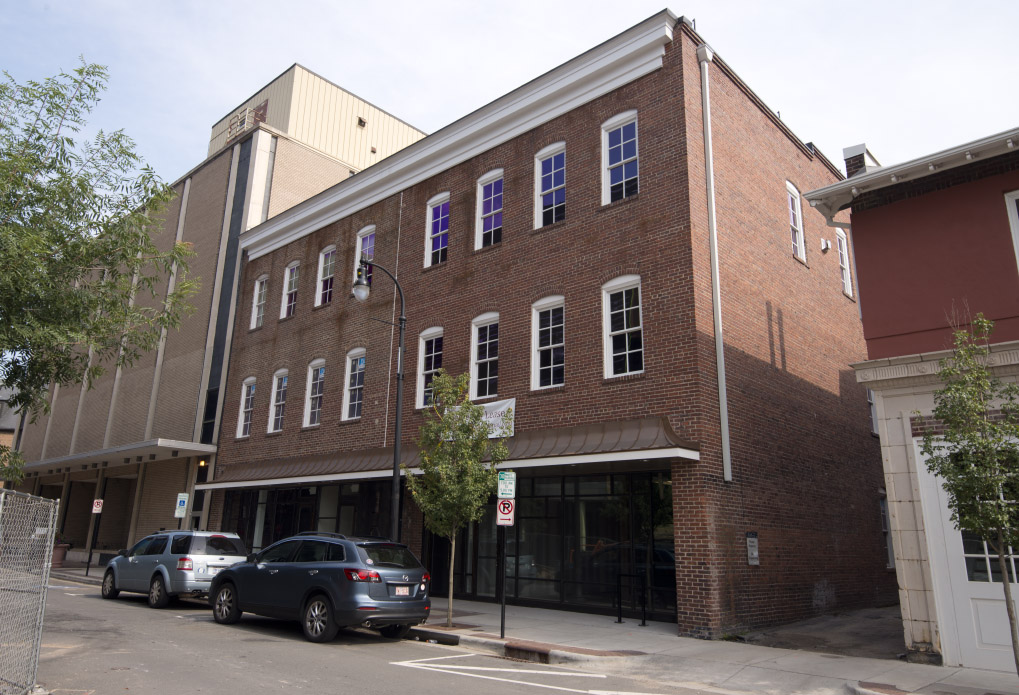 The funniest thing about this

The funniest thing about this building is the fake portico someone put on the back side of it, facing the Trinity Methodist parking lot.

Somehow, it reminds me of Rabbit dressing up Pooh's backside to look like a moose.

I'm wondering. Greenfire is a

I'm wondering. Greenfire is a name you've brought up several times. Are they really an enemy here or a benefit to the community of Durham? It seems there are only a few big money developers/land barrons who are scooping up everything. And, yes, Greenfire is revitalizing to a degree, but I don't think they are doing, yet, an overly impressive job in renovation and accessibility. Surely their lofts have outpriced any average citizen's income living in Durham. But then again, it seems we're sweeping such citizens away toward the east until that area becomes profitable (I digress).

Anyway, it always makes me worry that one particular company or individual starts buying up everything. They, in of themselves, become the driving force of change (which may be good or bad), but they also become our profit driven government of sorts making the decisions to revitalize in their way to make a profit. Again, I don't know how much Greenfire reaches out to the community, but like I said, they're certainly not pricing any thing within reach of the average homeowner (and it doesn't really matter there, but I hope they are at least reaching out to the community).

Once I learn more about them and the other few developers, I'm sure I will change my mind. Forgive the ignorance. I just don't trust developers (there are many great ones though) but more so than lawyers and politicians (I guess there may be some good ones, haven't met one yet).

Good question. I think the jury is still out on Greenfire. They are certainly of the mindset that abundant site control is the most important thing. I think becoming downtown's biggest owner/landlord doesn't exactly inspire people, and the pace of their actual production has been very slow. They are finally creating some business/restaurant space in the old Fire Station and the Baldwin, so at least that will contribute something to an active streetscape downtown. I'm glad to see the are finally renovating some more buildings. I do wish they had started by renovating the abandoned buildings they own on West Main St., though.

I hope we'll begin to see some more affordable units in some infill development downtown, at some point. Certainly Scott Harmon's Mangum 506 (on the edge ) is heading towards more affordability downtown, and Andy Rothschild's Golden Belt project, while not really in downtown, is renting affordably. So I think there are developers out there who are motivated to build for regular folk.

I'd be thrilled if Greenfire concentrated on really getting multiple buildings up and running/renovated rather than the piecemeal stuff - and rather than acquiring any more property (unless it belongs to Ronnie Sturdivant.)

I'm willing to give Greenfire

I'm willing to give Greenfire the benefit of the doubt because, unlike some property owners downtown, they're actually, even if slowly, moving forward with development.

One of the tricky bits of urban development is that the benefit from the money spent on a major project doesn't end at the walls of the building or the property lines, but spills over to the neighboring properties. Likewise, blight's problems bleed over to the neighboring properties. If you go into a depressed area and spend a lot of time renovating one single property, you won't see a great return on investment until your neighbors start doing likewise. All you've done by doing one property is helped them out a bunch.

This is one reason shopping malls have always been so successful -- a single owner goes all out to draw in the big names, then capitalizes on that by selling off the nearby stores which draw off that "anchor" store. The profits accrued through the smaller, subsidiary stores help underwrite the cost of keeping the big guys happy.

Having Greenfire own lots of properties downtown means they've set themselves up in a position that they can do things like the Hill Building, because their ownership of other properties nearby means that they catch some of the wind from that building getting redone in their own sails.

Downtown has, for the past five years, seen a lot of speculative investment by a lot of folks, including Greenfire. Many of them have been sitting on their properties, waiting for the big projects to generate that windfall, without them having to do anything. That's about the worst thing that could happen, because it paralyzes redevelopment while simultaneously driving smaller investors willing to do something funky with the building out. Greenfire has been buying some of those folks out, and if that means projects start to move forward, then great.

I'd also note that before Greenfire, Self Help was accused of similar tactics. I'll point out that even with Self Help, Greenfire, Capital, BDV, and Scientific Properties all running around snarfing up buildings, there's still a rather large number that aren't owned by any of them. We're still a long way from anyone creating a monopoly.

I don't think anyone is 'accusing' Greenfire of anything - they have concentrated heavily on gaining property control. And yes, their motivation in that is to control their destiny downtown, and to mitigate against the negative effects from the Ronnie Sturdivants on their block. So it's completely reasonable from a development perspective for them to do exactly what they are doing.

But the more control they get, the more they dictate the pace and distribution of development downtown - even the smaller people are going to wait to see what Greenfire does. That may end up being a very good thing (because they will shove the entirety of in-the-loop forward) or not (because they could end up stymying other 'pushes'.) For me, they simply don't have enough development under their belt to weigh in yet - but what happens in our more collective downtown will definitely be steered by them, for better or worse.

Hey, so it's been ~9 months since this post, which we're visiting today because of the facade removal.

Any new opinions on the pace and direction of Greenfire's work?

I went to this building

I went to this building sometime in the 1980s to pay my aunt's phone bill. My aunt was in the hospital at the time. The phone had been disconnected while she was in the hospital. After paying the bill I asked when service would be restored. I was told a deposit was required. I explained that she was in the hospital unable to pay bills until I arrived hoping to avoid the extra money. I further explained that she had phone service with them since 1920 and her bills were always paid on time. The pay clerk told me to speak with her supervisor. I explained the situation to the supervisor. I was told she could only make arrangements with the person whose name was on the account. She asked whose name was on the account. When I handed her the bill I noticed the bill was in my grandmother's name. She died in 1966. I told her that she (my grandmother) died in 1966 so she would have a hard time meeting with her. In the end I paid the deposit.