The building(s) in today's post represent the solutions to two Durham landscape mysteries that plagued me for awhile, now solved.

First the building below, which I noted in the Duke Archives in 2006. It was simply labelled as "Kramer Tobacco Company" with no location info. This, in and of itself was not terribly unusual - I've often managed to deduce the location of a building shot by something in the background of the photo, or, failing that, looking up the business name in one of the early city directories on microfilm at the main library (which is what I did for yesterday's photo of the Waverly Ice Cream company). 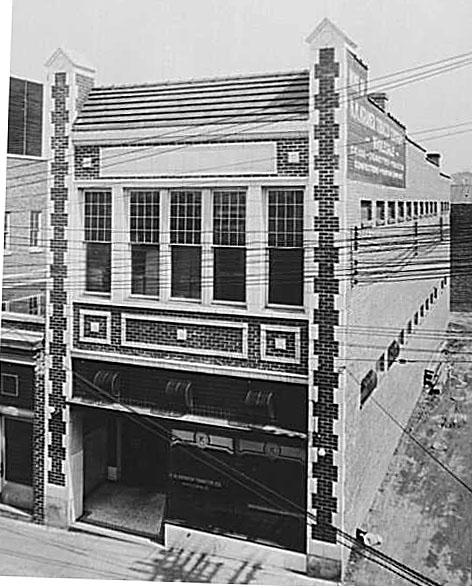 When I looked up "Kramer Tobacco" though, it said the business was located on Parrish St. I knew I'd never seen an image of Parrish St. that included this building. So it remained a mystery to me for many months (as I tried to figure out whether there was a spot this building could hide on Parrish St.)

Finally, I stumbled upon an aerial shot - and I thought I recognized the distinctive facade of this building - I looked at the shot with a magnifying glass, and confirmed it. Here is a blown-up view of that aerial. 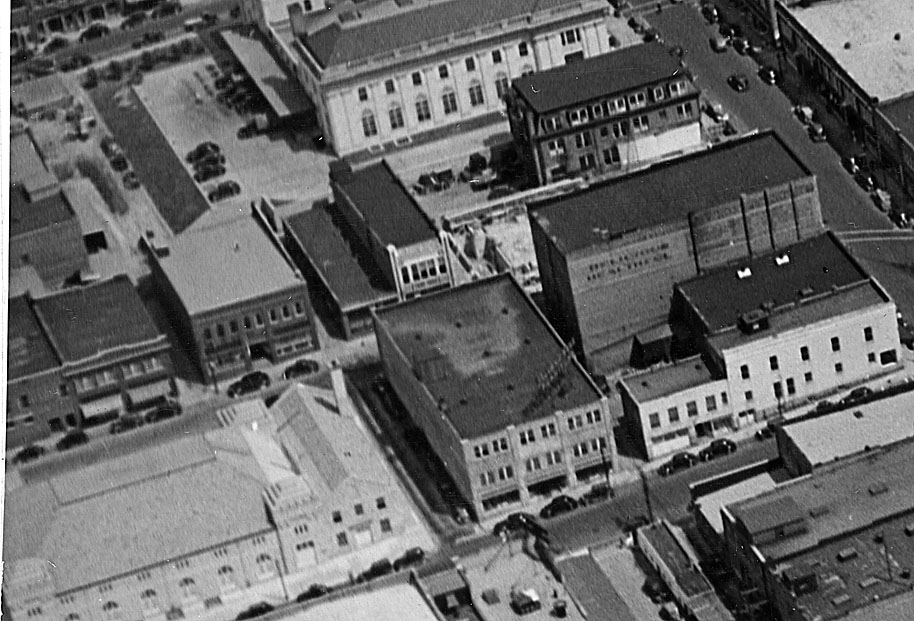 The one-story and two-story buildings were located just to the south of the Waverly Ice Cream company, on the east side of Holland St. They persisted in the current configuration until 1960, at least. 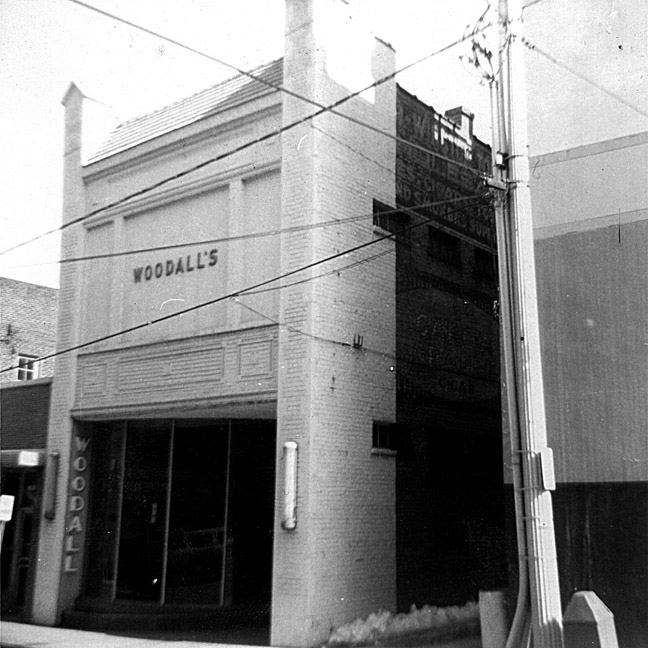 The BC Woodall company started as a "bicycle, buggy, and harness manufacturer," and was located at 118 West Parrish St. In 1953, they described themselves thussly:

"BC Woodall Co. is now located on Holland St. and is Durham's most complete departmentalized sports store ... here is a store catering to individual needs for the fisherman, hunter, golfer, bowler, and all other sports plus toys, bicycles, and playthings of all kinds for children and grown-ups alike. Here also is a sales organization that services schools, colleges in equipment for all major and minor sports. A competent sales staff is ready to serve you at all times ... folks who know sports and sports equipment." 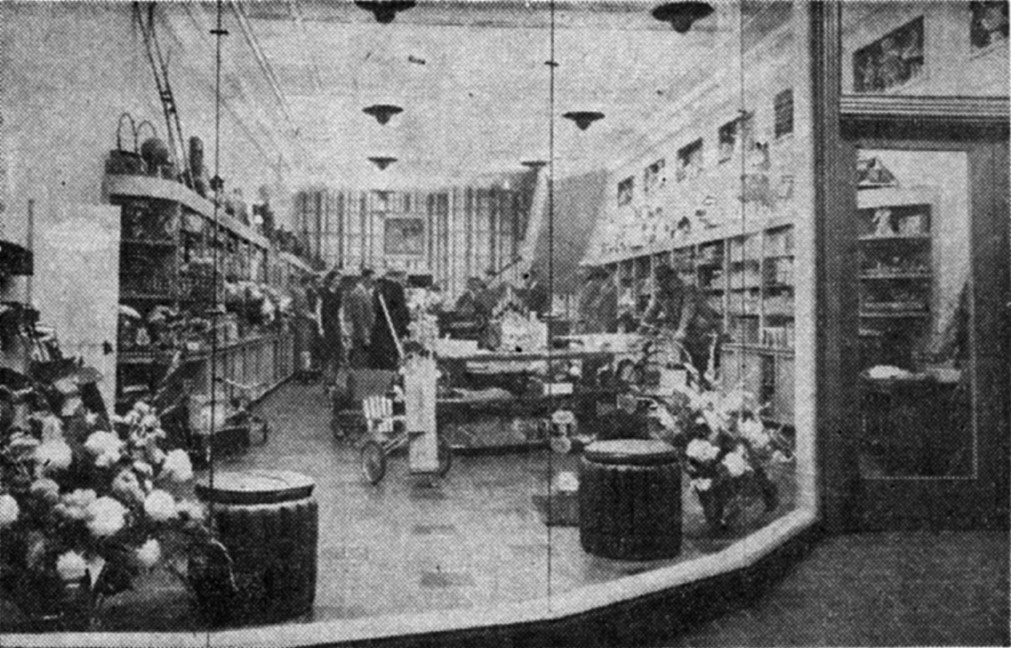 I assumed that the building had been torn down initially, but then I began to wonder...

Before I really knew that Holland St. had been a street at some point, I had been intrigued by the building below. 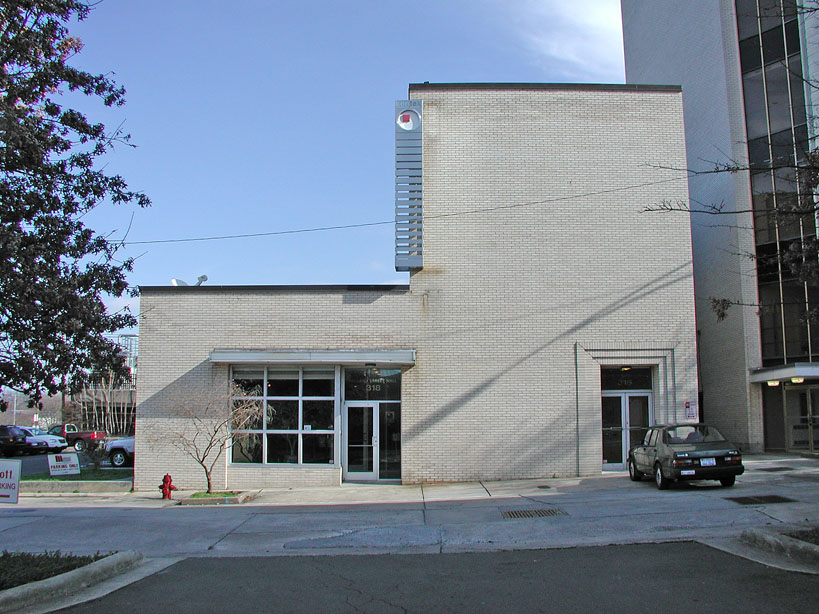 The Kontek building faces on "Holland Alley" as it is called - and I always found it cool that this funky building was, I thought, hidden in the middle of the block.

So - same spot as the Kramer Tobacco company. The enduring question - same building(s)? Although the outward appearance is not at all the same, the size/massing of the 'backwards L' shape seems to be in the exact spot of the original one-story, two-story building(s). There is also a little step-down on the roofline that appears similar. I think they could be - what do you think? 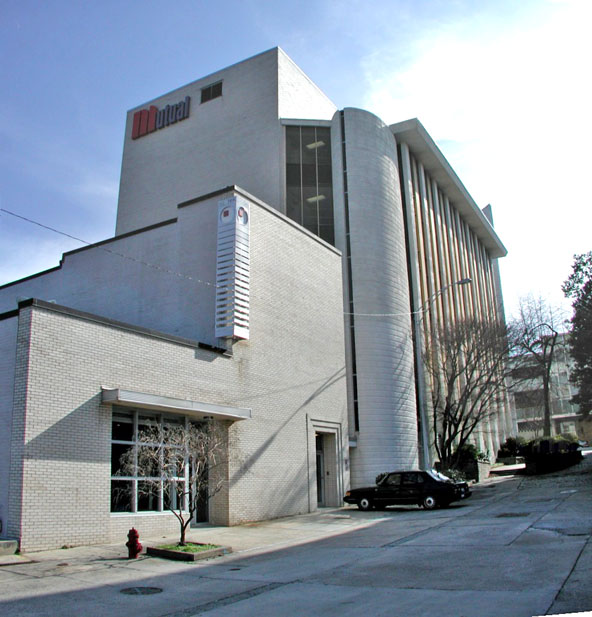 Update: 3/15/07
The nice folks at Kontek were kind enough to take me on a tour around the inside, and I would say that I left with a strong certainty that these are the same buildings. While the inside was redone as an impressive modern office space (with some very cool details) there are remaining elements, such as the original tin ceiling upstairs and exposed original beams and brickwork in the front stairway. I am also pretty certain that nothing of the original facade remains. The provided me with some nice shots taken from the Durham Centre. 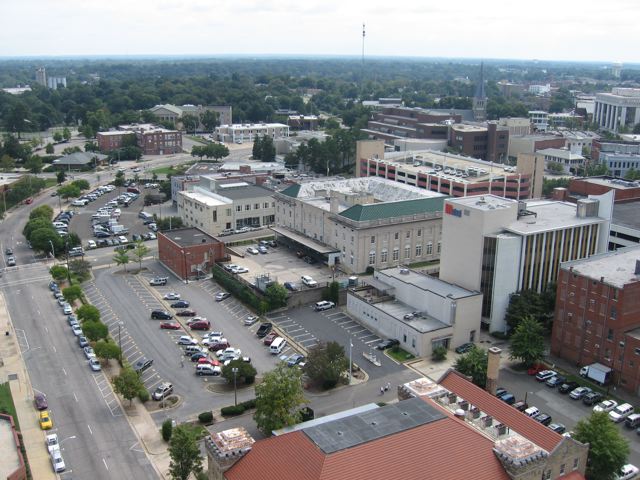 Looking southeast from the Durham Centre at Holland and Morgan.
(Courtesy KONTEK Systems) 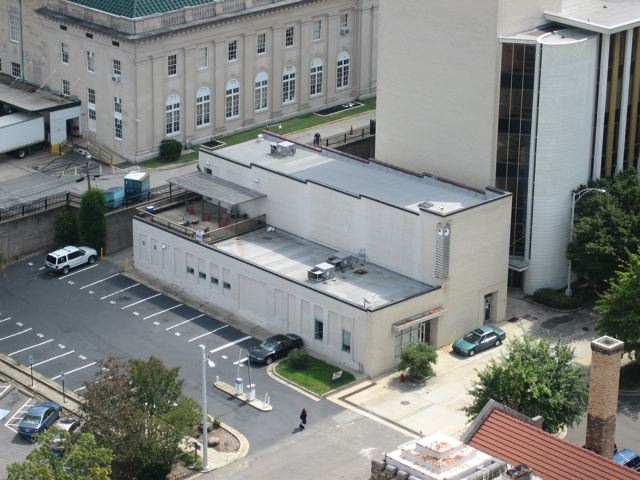 I think it is the same

so how did it morph -- they

so how did it morph -- they bricked in the windows? or they are still behind the white brick?

Nice piece of work! I think

Nice piece of work! I think you're absolutely right. Those mid-20th century "modernized" facades sure can camouflage a structure...

Wow. Gotta be the same

Wow. Gotta be the same building -- they don't do that stepped/regressed roof much anymore. Besides, why would you build that odd top on the right side?

Looking at the modern picture, the brick facade appears to sit out a ways from the door frame. What's more, there's a crack and a water stain right at the point where the buildings would have merged. My guess is an entirely new brick facade got put in front of the old one, in the age of "we don't need windows anymore, we've got electric lights!" (To be fair, this also had to do with reducing heating costs.) The sidewalk also appears to be abnormally narrow there, making me think you're right here.

That really makes me want to buy that building and scrape that silly white brick off the front. Ah, if only the owners would accept my debts as payment...

Looking further, the white brick on the front is clearly a different shade than the walls. Looks like the front brick is naturally white, while the side walls appear to be painted white.

Thanks all for your comments.

Thanks all for your comments. I think someone probably knocked off the projecting elements of the front facades of these buildings (giving a flat surface) and then bricked over the whole thing. The side view really makes it look like the white brick was added on to something. I would bet that there are bricked in window holes behind there somewhere.

If anyone knows someone who works in this building, I'd love to poke around sometime and try to find some other clues.

Why don't you just knock on

Why don't you just knock on the door? Have you tried this before in any of you investigations? After explaining why you're there I suspect you'd probably get an equal number of head-scratches and handshakes as door slams, but I could be wrong. Have you ever tried this with other buildings?

Sure - it's just easier if someone knows someone etc. Saves time explaining, and usually gets you more access. Some buildings I've been able to poke around in, some not. For me, it's mostly a lack of time rather than reticence.

I hadn't make the connection - thanks, I will do that.

I am in the building. From

I am in the building. From the interior, the building looks the same and knowing it's uses explains some of the strange interior marks on the plaster.

All of the buildings around here have bricked windows - I am guessing to lower taxes or something. The front entrance of Kontek matches up with the photos.

Also, there window count on the side matches up (several windows were bricked over, but you can see the outline).

Finally, the brick on the side is the same as the old brick and the facade is definitely built out over the original brick. The interior stairwell to the second floor gives clues about the original construction, but drywall covers the front part so there is no way to verify window placement on the front.